Development and Validation of a RP-HPLC Method with PDA Detection for the Simultaneous Estimation of Acetylsalicylic Acid, Paracetamol and Caffeine in Fixed Dose Combination Tablets

Acetylsalicylic acid and paracetamol are often formulated together in combination with caffeine, an adjuvant, for the relief of pain, fever and inflammations. A new RP-HPLC method with PDA detection has been developed and validated for the simultaneous estimation of acetylsalicylic acid, paracetamol and caffeine in fixed dose combination tablets. A Brownlee analytical column RP-C8 (5 µm, 150 x 4.6 mm) was used as the stationary phase and a mobile phase composed of acidic water/methanol mixture (60/40 v/v). Isocratic elution was employed. All the three components were eluted within 5.5 minutes with retention times of 2.05 ± 0.0062 for Paracetamol, 2.45 ± 0.0030 for Caffeine, and 5.03 ± 0.0140 for acetylsalicylic acid. The method was found to be accurate with mean recoveries of 99.39 ± 1.58 %, 99.69 ± 1.45 % and 100.56 ± 1.60 % for acetylsalicylic acid, paracetamol and caffeine respectively. It was also found to be linear (R2 ˃ 0.99), precise (RSD ˂ 2.0), specific, robust, sensitive and cost effective. Two brands of tablets containing the three active ingredients were successfully assayed by the validated method. The validated method can be used in routine quality control analysis of fixed dose combination tablets containing these three active ingredients.

Most multi-component drug formulations usually contain two or more active ingredients which are responsible for a combined therapeutic activity of the drug. This concept is beneficial when the selective agents have different mechanisms of action that provide additive or synergistic efficacy [Li et al., 2010]. Due to increased efficacy, increased resistance of microorganisms to single component formulations and dependency and/or tolerance, there is increased production of multicomponent drug formulation which has further led to increased drug counterfeiting and adulteration [Mackey and Liang, 2011]. However, the methods of analysis in most official compendia are for single component drugs and those common to most local Pharmaceutical manufacturing companies in the analysis of multi-component drug formulations involve multiple and repeated extractions making such methods laborious and cumbersome.

In developing countries where state of the art facilities for drug analysis do not abound, it is important that methods are developed which are accurate, cheap, easy to use and require the use of uncomplicated equipment in order to enable easy estimation of the amounts of active ingredients in fixed dose combination tablets. The main objective of this work, therefore, is to develop and validate a new, simple, accurate, linear, precise, specific, robust, sensitive and cost effective RP-HPLC method for simultaneous estimation of acetylsalicylic acid, paracetamol and caffeine in fixed dose combination tablets.

A High Performance Liquid Chromatograph from Perkin Elmer (chromera version 4.1.0.6386) consisting of a Flexar LC quartenary pump, autosampler and a photodiode array detector (PDA) and HP Chemstation software was used for the method development. The mobile phase was acidic water/methanol (60/40 v/v). The acidic water was a combination of distilled water: glacial acetic acid (75:0.2 v/v) ratio. The stationary phase was a C8 (5 µm, 150 x 4.6 mm) column from Brownlee Analytical Ltd. Components were eluted at a wavelength of 270 nm and injection volume was 10 µL at a flow rate of 1 ml/min. Isocratic elution was employed.

10 uL aliquot of each final working solution containing the analytes (reference standards and tablets) in their linear dynamic concentration ranges was injected into the liquid chromatograph: 20-100 µg/mL for acetylsalicylic acid, 2.5-20 µg/mL for Paracetamol and 1.25-10 µg/mL for Caffeine. A flow rate of 1 mL/min and working column temperature of 25°C were used. The compounds were separated on a reversed phase C8 (5 µm, 150 x 4.6 mm) Brownlee Analytical column, with a mobile phase of acidic water/methanol (60/40 v/v) employing isocratic elution. Triplicate injections were carried out for each solution. Absorbance peak areas were measured in all cases and mean peak areas computed.

The linearity of the developed method was determined from the calibration plot of peak area against concentrations of standard solutions for each component. The correlation coefficient (r2) values obtained for each curve depicted the linear relationship existing between the peak areas and the concentration of the standard solutions. The linearity of the developed method was analysed statistically. Triplicate determinations for each concentration of each component of interest were carried out.

The accuracy of the developed method was determined by calculating the percentage recovery. Five (5) different concentrations of the standard solutions for the three components of interest were run in triplicate determinations for each concentration. Percentage recovery (% R) was calculated based on the formula:

The recoveries of the APIs from the tablet samples were also determined and used as a measure of the accuracy of the method.

A second method was also used in the assessment of the accuracy of the method. Here, acetyl salicylic, paracetamol and caffeine standards were accurately weighed and added to a mixture of tablet excipients at three different concentrations of 50, 100 and 200 µg/mL. Samples were prepared in triplicates at each level, and the percentage recoveries were determined.

Precision of the developed method was determined based on intra-day and inter-day parameters. The intra-day precision was evaluated by analysing six sample solutions (n=6) each of 20 and 100 µg/mL for ASA, 15 and 20 µg/mL for paracetamol and 2.5 and 5 µg/mL for Caffeine, calculating the actual concentrations of these standard solutions. The inter-day precision was evaluated in three consecutive days (n=18). The concentrations of the three APIs were determined and relative standard deviations (RSD) were calculated.

Specificity of the developed was evaluated by preparing a solution of the reference standards of the three APIs in the presence of excipients. Five (5) injections of this solution were carried out to observe any interfering peaks.

Robustness was established by varying certain HPLC conditions and keeping certain conditions constant.  Six sample solutions were prepared and analysed using the established chromatographic conditions and by varying some of the conditions including the flow rate, mobile phase composition, mobile phase pH, and column temperature. These parameters were varied to determine the influence of these chromatographic conditions on the developed method. Data obtained was subjected to statistical analysis using analysis of variance (ANOVA test) [Cesar et al., 2008].

2.6.6. Limit of Detection (LOD) and Limit of Quantification (LOQ)

The LOQ and LOD of the developed method was established based on the calibration curve and using the relation:

In the selection of mobile phase for RP-HPLC method development, certain factors such as cost of solvent(s), polarities of solvent(s) and that of the analyte(s) of interest and the solubility of the analyte(s) were considered [Ahuja and Rasmussen, 2007; Kenkel, 2003; Skoog et al., 2004]. Preliminary studies with several solvent systems were performed to select the most effective solvent system for the separation of the three active pharmaceutical ingredients (APIs). Solvents such as ethanol, isopropyl alcohol, chloroform, and some phosphate buffers at various pH values were tried. Some of the eluents gave good resolution but a lengthy run time. Others also gave poor resolution of peaks. The mobile phase of acidic water/methanol was tried in different proportions. However, acidic water/methanol (60/40 v/v) was chosen because it produced the best resolution of peak symmetry and separation of all components within the least retention times. Glacial acetic acid was added to provide an optimum pH of 2.5 for the mobile phase since pH has a lot of influence on the retention times of ionisable compounds [Suresh et al., 2010; Singh, 2013; Ahuja and Rasmussen, 2007; Kenkel, 2003; Skoog et al., 2004]. This mobile phase composition also aided fastest elution of all the three components with retention times of 5.03 ± 0.014 for ASA, 2.05 ± 0.0062 for Paracetamol and 2.45 ± 0.0030 for Caffeine as depicted in Figure 1. The two components of the mobile phase are cheaper compared to all the others. Chandra and Sharma used the same mobile phase, though on a C-18 stationary phase, to achieve good separation and resolution for paracetamol and caffeine in formulated tablets [Chandra and Sharma, 2013].

The mobile phase of acidic water-methanol (60:40 v/v) ratio and a flow rate of 1 ml/min aided a better resolution of peaks and separation of components. These together with the column C8 (5 µm, 150 x 4.6 mm), wavelength of 270 nm and isocratic mode of elution gave a well-defined chromatographic conditions that resulted in a better peak resolution and separation of components within elution period of 5.5 minutes. This is illustrated in Figure 1. 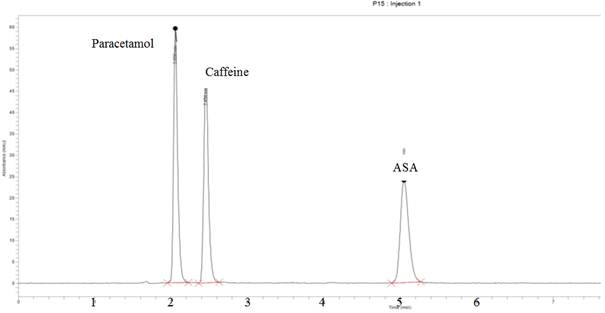 Figure 1. Chromatogram of ASA, Paracetamol and Caffeine in a ternary mixture.

Standard calibration graphs for the analytes were constructed by plotting peak areas produced by injection of standard solutions against the concentrations used. The calibration graphs were analysed by regression analysis, and the equation, correlation coefficient, slope, and y-intercept were calculated. Results are found in Table 1.

The accuracy of the developed method was computed for by calculating the percentage recoveries of five different concentration of each component in the ternary mixture. The percent recovery values are presented in Table 2.

Precision of the developed method was also determined based on inter and intra-days precisions. Results are presented in Table 4. It can be seen that the method is precise since the RSD values for both inter-day and intra-day precision were far below 2.0.

Table 2. Mean recovery of acetylsalicylic acid, paracetamol and caffeine from the ternary mixture.

The mean recovery values of 99.39 ± 1.58 for ASA, 99.69 ± 1.45 for paracetamol and 100.56 ± 1.60 for caffeine depicts the accuracy of the method. The method was also accurate in the presence of tablet excipients as shown in Table 3. The mean recoveries and standard deviations at all three levels of determination, were very good for all three APIs.

Table 3. Mean recovery of acetylsalicylic acid, paracetamol and caffeine in the presence of tablet excipients.

Robustness of the method was examined by examining changes in different experimental conditions. The developed method showed a high level of robustness as changes in mobile phase pH (±0.2 pH units), methanol composition in mobile phase (±2%), wavelength (± 2 nm), and temperature (± 3°) did not adversely affect the developed method. Statistical results obtained with these changes in chromatographic conditions were almost the same as statistical results from the original chromatographic conditions. 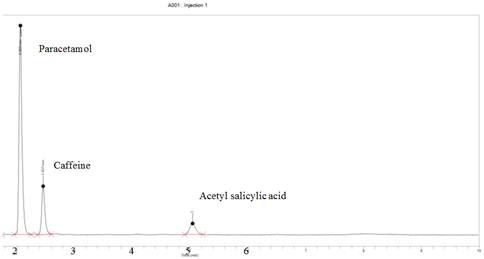 3.2.6. Limit of Detection and Limit of Quantification

This is a measure of the sensitivity of the developed method and the HPLC equipment (Chromera version 4.1.0.6386) used for the method development. The results are presented in Table 4. The lowest amount of ASA, Paracetamol and Caffeine that could be detected and quantified were 1.078 x 10-5; 3.267 x 10-5 µg/mL, 0.00; 0.00 and 1.237 x 10-7; 2.193 x 10-6 µg/mL respectively. These values are very small and indicate that even the smallest amount of the analyte(s) can be detected using the developed method and the HPLC equipment under consideration. Hence the method and the equipment are very sensitive. The zero LOD and LOQ of paracetamol indicates that Paracetamol has virtually no detection and quantification limit, hence the smallest amount can be detected and quantified by the developed method.

The developed method was used for the simultaneous estimation of the APIs in fixed dose combination tablets. Two such tablets on the market, EFPAC and CAFALGIN, were analysed with the proposed method and the results are presented in Table 5. The content (mg) and percentages of each API in each tablet sample was also computed using peak areas and the regression equations from the calibration curves. The mean content obtained for ASA, paracetamol and caffeine in both formulated products were very close to the labelled amount. The results show that the method is accurate in determining the content of the three active ingredients in fixed dose combination tablets.