The fruits of Solanum torvum are regularly used in many Ghanaian food preparations because of the belief that they are very nutritious. The main aim of this work was to assess the nutritional and mineral composition of the Solanum torvum fruits. Proximate analyses of dried powdered fruits were therefore performed. The results indicated that the fruits possess high moisture content (86.230%). The values for the other parameters checked were carbohydrates 7.033%, proteins 2.322%, fats 0.278%, ash 0.143% and crude fiber 3.993%. Atomic Absorption Spectroscopy (AAS) analysis of essential minerals was performed to ascertain the concentrations of iron, manganese, calcium, copper and zinc in the fruit. The results were iron (76.869mg/kg), manganese (19.466mg/kg), calcium (221.583mg/kg), copper (2.642mg/kg) and zinc (21.460mg/kg). Vitamins A and C contents were also analyzed and found to be 0.078mg/100g and 2.686mg/100g respectively. The high iron content of the fruits proves the fact that, the fruits truly have hematinic property.

The Solanum torvum (Solanaceae) plant is a common plant native to many tropical countries in Africa and the West Indies. It is also found in some parts of Asia. In Ghana, and many other countries, the fruits are used for food. The leaves are used in many traditional medical practises in Africa. (Adjanohoun et al 1996) The plant grows as a short (about 2-4 m tall), erect shrub with lots of branches. Solanum torvum grows into a large thorny impenetrable thicket (Mohan and Bhandare 2012). Someother species, which belong to the genus Solanum, are Solanum ficifolium and Solanum ferrugineum (Langeland and Burks 1998). The fruits of Solanum torvum are clusters of tiny green spheres (about 1 cm in diameter) that become yellow when fully ripen. They are thin-fleshed and contain numerous flat, round, brown seeds (Howard 1989; Liogier 1995; Little, Woodbury, and Wadsworth 1974).

Mineral nutrition is a significant aspect of human life and it plays a pivotal role for healthy growth. These nutritional minerals have various sources. In many African countries, wild edible plants are used as food and hence contribute significantly to the nutritional needs of the people. In Ghana, Solanum torvum (locally referred to as ‘Kwahunsusua’) is used essentially for food. In the south of Ghana, especially, it is added to palm nut soup and some stews. It is a general belief in the Ghanaian society that the fruit of Solanum torvum is rich in minerals that help increase the amount of blood in the human body, hence, it is generally advised by locals to take the juice of Solanum torvum to prevent anemia.

Various pharmacologically active compounds have been isolated from Solanum torvum. Aqueous extracts of Solanum torvum, for example, depress the number of erythrocytes, leukocytes and platelets in the blood of mice and hence are lethal to them (Tapia, A., R., Astudillo, A., V., & Uribe, R. 1996). Some extracts of the plants have also being reported to be used in the treatment of coughs, colds and skin diseases (Sundari, G., S., Rekha, S., and Parvathi 2013). Methanolic extracts of Solanum torvum fruits have demonstrated a wide range of antimicrobial activity against certain human and animal clinical isolates (Chah, Muko, and Oboegbulem 2000).

Fresh samples were obtained from the Ayeduase, Ayigya and Central markets, all in Kumasi. The unripe fruits were removed from the stalk and well washed with distilled water. The fruits were then wiped to dry all the water around it. They were then dried in the oven at 60°C and left overnight. The dried sample was blended into powder and stored in a plastic container.

About 2 g of the fresh sample was transferred to a previously dried and weighed crucible. The crucible was placed into an oven and the sample dried for 5 hours at 105°C. The sample was then cooled in a desiccator and then weighed. The moisture content is expressed in weight percentage by measuring the weight loss after drying.

The Kjhedahl method was used. About 2 g of the sample was put into a digestion flask and heated with 25 ml of concentrated H2SO4 in the presence of selenium catalyst. The sample was digested using a digestion burner till a clear solution was obtained. The digested sample was then transferred into a 100 ml volumetric flask and topped to the mark. 25 ml boric acid was measured into a 250 ml conical flask and two drops of mixed indicator was added. The apparatus was flushed with boiling distilled water and then the liquid was drained from the steam trap before use. The conical flask and its contents were then placed under pressure in such a way that the tip was completely immersed in the solution. 10 ml of the digested sample solution was poured into the steam jacket through a funnel and then 15 ml of 40% NaOH was then added to the decomposition flask. The funnel stopcock was closed to drive the liberated ammonia into the collection flask. Steam was forced through the decomposition chamber by shutting the stopcock on the steam trap outlet. The boric acid changed to bluish green as soon as it came into contact with the ammonia. The conical flask was then removed after 5 minutes. The content of the flask was titrated against 0.1 N HCl until the solution became colorless. This was done in triplicate. A blank titration was done to correct for traces of nitrogen in the reagents.

About 2 g of the sample was transferred into a Whatman paper and sealed. 150 ml of petroleum ether was poured into previously dried and weighed round bottom flask. The sample was then placed into the Soxhlet extractor and the condenser connected to it. The setup was assembled and the flask placed onto the heating mantle. The sample was then refluxed for 4 hours. After the extraction, the thimble was removed and the solvent recovered. The fat that was obtained was then dried together with the flask in an oven for 30 minutes at 105°C. It was then cooled in a desiccator and weighed.

The sample in the filter paper used for the fat determination was transferred into a 750 ml Erlenmeyer flask and 0.5 g of asbestos was added. 200 ml of boiling 1.25% H2SO4 was added immediately and the flask was set on a hot plate and the condenser was connected. After 30 minutes the flask was removed and its contents were immediately filtered through a clean linen cloth. The sample was then washed repeatedly with a large volume of water until the washings were no longer acidic. 200 ml of 1.25% of boiling NaOH was added to the filtrate. It was also boiled for 30 minutes and washed several times until it was no longer basic. The residue was then transferred into a weighed crucible. The crucible and its content were dried and ashed for 30 minutes. The crucible was then cooled and weighed. The percentage crude fiber was expressed as weight loss in percentage.

The total carbohydrate content of the sample was obtained by taking the difference between 100 and the sum of the moisture, crude fiber, protein, fat and ash contents in the sample.

2.4. Determination of Vitamin A (β-Carotene)

The unripe fruits were well washed with tap water and blended with a little amount of water. This was then sieved and transferred into a clean bottle to be stored. About 10 ml of the sample was measured and poured into a mortar. A spatula full of anhydrous sodium sulphate was added to remove the water in the sample. 45 ml of acetone was added in bits to the sample while grinding. The mixture was filtered. The filtrate was transferred into a separating funnel containing 20 ml of petroleum spirit and then washed with water by using a wash bottle to wash the sides of the funnel. This was repeated until the aqueous layer was no longer turbid. The organic layer was filtered by placing a few grams of anhydrous sodium sulphate on the filter paper. 2 ml of the organic layer was measured into a small test tube. Nitrogen gas was used to evaporate the sample to dryness and then it was reconstituted with 700 µl of methanol dichloromethane (50:50). 20 µl of the sample was then injected into a Shimadzu HPLC with an ODS C18 column and a mobile phase of acetonitrile, dichloromethane and methanol (70:20:10) in isocratic mode. Analyte was monitored at 452 nm (Ahamad and Saleemullah 2007).

A juice of the sample was made by using about 50 g of the fruits and 200 ml of water by blending and sieving. 5 ml of metaphosphoric acid/acetic acid and 2 ml of the juice were measured into an Erlenmeyer flask and the solution was titrated against indophenol dye. 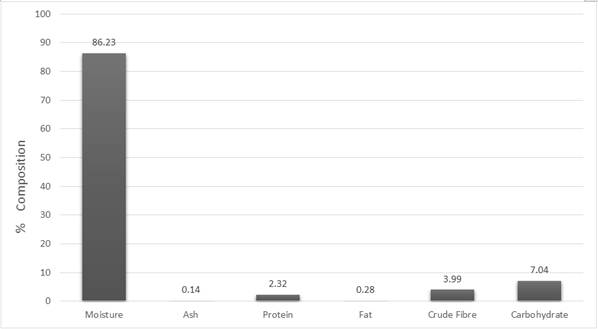 In a similar study conducted in India, proximate composition analysis revealed a lower moisture percentage (80.5 %) but a much higher ash content (12.3 %). Iron, copper and manganese were found to be below 0.5 µg/mL (which is equivalent to mg/kg or ppm). Calcium was the most abundant mineral as well in that study (Bhagyashree et al. 2012). 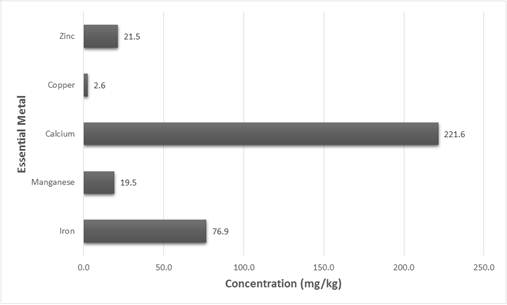 In many parts of Ghana, traditional healers usually prescribe juice made from the fruits of Solanum torvum for the treatment of anemia and other ailments (Asiedu-Darko 2010; Koffuor, Amoateng, and Andey 2011). Anemia is usually prevalent in pregnant women and also in children (WHO 2000). Different types of anemia exist. They include anemia associated with bone marrow disease, anemia of chronic disease, aplastic anemia, sickle cell anemia, hemolytic anemia and iron deficiency anemia (Al-Shawi, A., R., Obaid, J., A., & Noor, H. 2012). Iron deficiency anemia occurs when the concentration of elemental iron in the body decreases significantly. Because iron plays a crucial role in hemoglobin formation, iron shortage or deficiency results in decreased healthy red blood cell count (Nagababu, Gulyani, and Earley 2008). A lot of blood is produced by the bodies of pregnant women to support the development of both mother and child. Anemia is therefore a severe complication which can have adverse consequences for both mother and child (Al-Shawi, A., R., Obaid, J., A., & Noor, H. 2012). The high concentration of iron in the fruits of Solanum torvum therefore rationalizes its prescription by herbalists for the treatment of anemia, especially that which is due to iron deficiency. This justifies juices made from the fruits of Solanum torvum as hematinic agents. 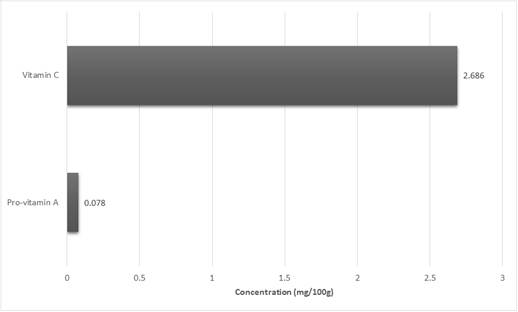 Calcium is a major dietary element needed for strong bones and teeth formation. Zinc, copper and manganese are regarded as trace dietary elements. Altogether, these elements are required in various concentrations for the growth of humans (Al-Jameil and Tabassum 2014). The fruits of Solanum torvum represent a viable source for these essential metals and validates it as a good nutritional source.

Solanum torvum possesses most of the nutrients required for healthy growth and since the fruits are mostly added to food, they help in increasing the overall nutritional content of the consumed food. Extracts of the fruit possess high iron content and therefore justifying their use as haematics.