Antimicrobial Activities of Some Leaves and Fruit Peels Hydrosols

The increase in the prevalence of side effects of many synthetic antimicrobial agents and incidence of multidrug resistant bacteria has spurred scientists on the research for plant based antimicrobial of therapeutic potentials (Reische et al., 1998). Essential oils and their by-products have been widely used in folkloric medicine and as such, they have been screened for their potential uses as alternative remedies for the treatment of infectious diseases (Afolayan et al., 2009).

Essential oils, by definition, are volatile oils that have aromatic components and that give plants their peculiar fragrance or flavour. They are often referred to as volatile plant secondary metabolites because they are by-products of plant metabolism. They are usually produced by steam distillation of aromatic plants and are used as fragrances, flavourings and as herbal medicines (Koul, 2008). Some essential oils have been reported to have insecticidal properties (Massebo et al., 2009). Some have also been reported to have antifungal, antiviral, antioxidant and antibacterial properties (Mmbengwa et al., 2009). Essential Oils from Cyclotichium niveum (Bioss) showed a strong antibacterial activity against Klebsiella pneumonia, and Staphylococcus aureus and also has a strong antifungal activity against Candida albicans (Alim et al., 2009).  The quantity of essential oils found in most plants are usually 1 to 2%, however, they can have amounts ranging from 0.01 to 10% (Koul, 2008).

Hydrosols, floral water, distillate water, or aromatic water, are the co-products or by-products of steam distillation of plant material. They are quite complex mixtures containing traces of the essential oils and other water-soluble components of the plant. Usually, the plant is being distilled to produce an essential oil; however, some plants are processed only for the hydrosol. During distillation, steam and essential oil components are in intimate contact. On condensation, some essential oil compounds, the more water-soluble oxygenated polar compounds, dissolve in the aqueous phase and are therefore lost to the water distillate or hydrosol (Bohra et al., 1994). Hydrosols are scented, and usually have a pH of 4.5 to 5.5 (Schorr, 2004; Paolini et al., 2008). pH greatly influences the therapeutic effects of the hydrosols (Catty, 2001). Some hydrosols have been shown to have inhibitory effects on some bacteria (Faith et al., 2011; Hussien et al., 2011; Oral et al., 2008; AL-Turki, 2007; Dubey et al., 2011; Tornuk et al., 2011). It is also known that the compositions of hydrosols and their antimicrobial effects depend on plant species and regional conditions (Sağdç and Ozcan, 2003; Oral et al., 2008).

Antimicrobial properties of the essential oils from the leaves and fruit peels of the plants under study have been reported by other scientists (Onawunmi et al., 1984; Nakahara et al., 2003; Sharma and Triphathi, 2006; Fisher and Carol, 2008; Sukanya et al., 2009; Natheer et al., 2012). However, not much is reported of the antimicrobial properties of the hydrosols of the leaves and fruit peels of these plants. The objective of this study was, therefore, to evaluate the antimicrobial activity of the hydrosols of the fresh and dried leaves of Cymbopogon nardus (Citronella), Chromolaena odorata (Siam Weed), Ocimum gratissimum (Basil), Cymbopogon citratus (Lemon grass), and the fresh and dried fruit peels of Citrus sinensis (Orange) and Citrus aurantifolia (Lime) against E. coli, S. aureus, C. albicans, B. subtilis, E. faecalis.

Plants for the work were obtained from the herbarium of the Department of Pharmacognosy and the Botanic gardens all of Kwame Nkrumah University of Science and Technology, Kumasi in Ghana. The samples were collected between the months of May and August 2011 for the distillation. The common and scientific names of the plants used in this study are shown in Table 1.

Between 80 and 450g of plant samples, fresh or air dried, were hydrodistilled using the Clevenger type apparatus for over 3 hours. Leaves from Cymbopogon nardus, Chromolaena odorata, Ocimum gratissimum and Cymbopogon citratus were used for the preparation, whilst peels from Citrus sinensis and Citrus aurantifolia were used.

2.3. Conductivity and PH of the Hydrosols

Table 1. Plants from which hydrosols were obtained.

Table 2. PH and conductivity of the plant hydrosols.

2.5. Antimicrobial Screening of the Hydrosols

The agar well-diffusion method was employed. 20 ml of Nutrient Agar was melted on a water bath. The molten agar was then stabilized at 45°C for 15 minutes in a thermostatic water bath. The agar containing tubes were then inoculated separately with 0.1 ml of the cultured test organisms. The tubes were then rolled in between the palms to ensure thorough mixing. The contents were then poured into separate sterilized Petri dishes. The dishes were then allowed to set on a laminar horizontal flow chamber after which holes were punched in each dish using 10 mm diameter sterilized cork borer. The hydrosols were then poured into the labeled holes made in the dishes. The dishes were then allowed to pre-incubate for one hour before incubating them in a bacteriological incubator at a temperature of 37°C for a period of 24 hours. The inhibition zones were determined in triplicates and the antimicrobial activity was expressed as the mean of the inhibition zone (mm) produced by the hydrosols. The results of the antimicrobial screening of the hydrosols are shown in Table 3.

3.1. pH and Conductivity of Hydrosols

Hydrosols are either neutral or slightly acidic and the pH greatly influences the therapeutic effects. The pH values obtained for the plant hydrosols indicated that the hydrosols were acidic which are in agreement with Catty, 2001. There was an observable difference in pH and conductivity between the fresh plant hydrosol and that of the dried hydrosol of the same plant species which is indicative of difference in therapeutic effects. There was, however, no correlation between the pH and conductivity of the plants hydrosols as the R2 values for the hydrosols of the fresh and dried samples were respectively 0.6105 and 0.1135.

The hydrosols from the plants studied exerted varying levels of antimicrobial effect against the five tested organisms. The results are presented in table 3.

It can also be seen that there are differences in antimicrobial activity between hydrosols of fresh and dried samples of the same plant. For instance the hydrosol from fresh peels of C. aurantifolia was able to inhibit the entire tested organisms compared to the dried C. aurantifolia which was able to inhibit only S. aureus. The non-volatile chemical group, primarily hydrophilic acidic constituents, reported to occur in hydrosols could contribute to the inhibitory effect and could possibly be in synergy with the trace essential oil components.

Hydrosol of fresh peels of C. aurantifolia showed the highest antimicrobial activity against four of the tested organisms, i.e. E. coli, S. aureus, C. albicans and E. faecalis. This high antimicrobial activity could partly be due to higher content of phenols and flavonoids in this hydrosol. It was, however, the hydrosol of dried leaves of C. citratus that showed the highest antimicrobial activity against B. subtilis. The most susceptible of all the microbes was S. aureus as six of the hydrosols were able to inhibit its growth to various extents. However, E. faecalis was the least susceptible as only two of the hydrosols were able to inhibit it to a minimal extent.

The results also revealed that hydrosols that showed activity against the Gram negative E. coli were able to show antimicrobial activity against the fungus (C. albicans) and most of the gram positive strains (B. subtilis, S. aureus and E. faecalis). However, not all the hydrosols that inhibited the gram positive strains were able to inhibit the gram negative E. coli.

AL-Turki (2007) in his work indicated that hydrosols of thyme, peppermint, black pepper and garlic exhibit antibacterial activity against B. subtilis and S. enteritidis. Also Nascimento et al. (2000) investigated inhibitory effect of plant extracts on antibiotic resistant bacteria and reported that thyme (Thymus vulgaris), clove (Caryophyllus aromaticus) and basil (Ocimum basilicum) were effective against P. aeruginosa but they did not affect E. coli. It has been demonstrated that the antimicrobial effects of the essential oils act by causing structural and functional damages to the bacterial cell membrane (Goni et al., 2009) 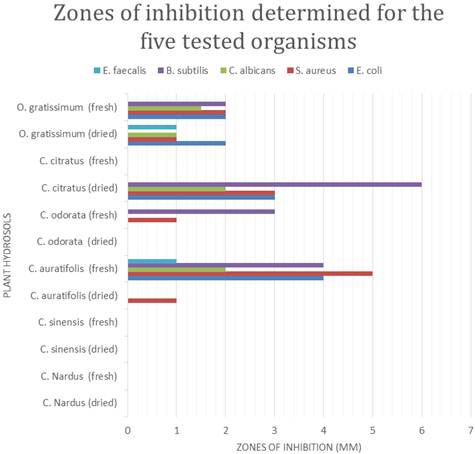 Figure 1. Zones of inhibition for the five selected organisms determined for the hydrosols.