The ontology model is a graph G=(V,E) such that each vertex v expresses a concept and each directed edge e=vivj denote a relationship between concepts vi and vj. The aim of ontology similarity measure is to get a similarity function Sim: V×V

In recent years, ontology similarity-based technologies were employed in many applications. By virtue of technology for stable semantic measurement, a graph derivation representation based trick for stable semantic measurement is presented by Ma et al., [6]. Li et al., [7] determined an ontology representation method which can be used in online shopping customer knowledge with enterprise information. A creative ontology matching system is proposed by Santodomingo et al., [8] such that the complex correspondences are deduced by processing expert knowledge with external domain ontologies and in view of novel matching technologies. The main features of the food ontology and several examples of application for traceability aims is reported by Pizzuti et al., [9]. Lasierra et al., [10] pointed out that ontologies can be employed in designing an architecture for taking care of patients at home. More ontology learning algorithms can refer to [11-22].

In this paper, we present the new ontology similarity computation and ontology mapping algorithms relied on the semi-supervised learning which was proposed in Zhang et al., [23]. The basic idea of such learning approach is intending to fully use the unlabeled ontology data in the learning processing. In terms of the ontology function, the ontology graph is mapped into a real line and vertices are mapped into real numbers. Then the similarity between vertices is measured by the difference between their corresponding real numbers.

Let V be an instance space. For any vertex in ontology graph G, its information (including its attribute, instance, structure, name and semantic information of the concept which is corresponding to the vertex and that is contained in its vector) is denoted by a vector with p dimension. Let v=

be a vector which is corresponding to a vertex v. For facilitating the expression, we slightly confuse the notations and denote v both the ontology vertex and its corresponding vector. The purpose of ontology learning algorithms is to get an optimal ontology function f: V

be a positive semi-definite kernel function and K be the

. The ontology graph Laplacian matrix is defined as

is a diagonal degree matrix with

, and the normalized version of ontology graph Laplacian is denoted by

, where I is the identity matrix. Assume that a prediction ontology function

is evaluated on ontology data set

, and the prediction is expressed as

. The smoothness of ontology function

with regard to the ontology graph is formulated by

Its minimization is called the Laplacian regularization. For fixed labeled ontology data

be the Reproducing Kernel Hilbert Space norm of the prediction ontology function,

be the associated balance parameter, and

be the balance parameter for the smoothness. In terms of an ontology loss function

, the Laplacian regularized semi-supervised learning in ontology setting can be denoted by

According to representer theorem, the minimizer of this optimization ontology problem has the following form:

are called the kernel expansion coefficients.

Given an ontology data

are determined. In what follows, we define

as the rows in the kernel matrix corresponding to the labeled samples, where

By virtue of representer theorem, we have

. The above ontology problem can be rewritten as

is the labels of the labeled ontology samples. Let Q=

. Then, the objective ontology function can be further denoted equivalently as

In our article, we use low-rank approximation of symmetric, positive semi-definite matrices

is the rank-m approximation of matric

kernel matrix, we selects a collection of m rows (or columns)

, calculate an eigenvalue decomposition on the intersection of given rows and columns

, and thus approximate the kernel matrix as

Hence, the kernel matrix can be expressed in the following form

. The Hessian matrix (1) can be formulated by

. Therefore, it has a multiplicative form:

We emphasize that the degree matrix D can be approximated by

Then both P and

in the matrix Q can be determined by

In view of (3) and (4), the matrix can be decomposed into a low-rank factorization form as

Then the ontology problem in (1) is equivalent to the following regression:

is a constant independent of any variables, and

For determined (5), the top m eigenvectors of Q can be approximated as follows. Compute the eigenvalue decomposition of the

¼. Then the eigenvalue and eigenvectors of Q can be approximated by

The whole ontology algorithm is presented in Algorithm 1.

. Thus get the ontology function.

according to the value of

Two simulation experiments on ontology similarity measure and ontology mapping are designed in this section. We perform our experiments on a Windows 7 machine with 8GB RAM. And, we implement our algorithm using C++.

The "Go" ontology O1 was constructed by http: //www. geneontology. org. (Fig. 1 presents the graph structure of O1). We use P@N (defined by Craswell and Hawking [24]) to determine the equality of the experiment result. 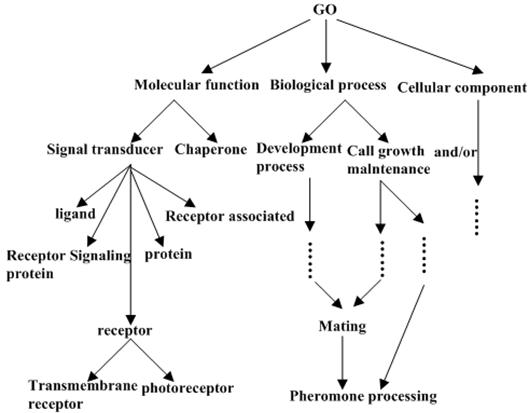 For our second experiment, we use "Chemical Index" ontologies O2 and O3 (part of the graph structures of O2 and O3 are presented in Fig. 2 and Fig. 3 respectively). Note that the Figure 2 and Figure 3 only show the part of vertices on O2 and O3. Actually, the number of vertex on O2 is 24, and the number of vertex on O3 is 17. The purpose of this experiment is to construct the ontology mapping between O2 and O3. Again, P@N criterion is applied to measure the equality of the experiment results.

Ontology, as a data representation model, has been widely used in various fields and proved to have a high efficiency. The core of ontology algorithm is to get the similarity measure between vertices on ontology graph. One learning trick is mapping each vertex to a real number, and the similarity is judged by the difference between the real number which the vertices correspond to.

We thank the reviewers for their constructive comments in improving the quality of this paper. The research is financed by: NSFC (No.11401519).