Malaria is the most important of the parasitic disease of humans, and its neurological complications cerebral malaria is arguably one of the most common non-traumatic encephalopathies, and it is becoming more difficult to manage particularly in areas of multi-drug resistance. The clinical symptoms include anaemia and cerebral haemorrhage. Hence, This study was designed to assess changes in serum haematological parameters in the Plasmodium berghei infected albino mice treated with neem extracts. Albino mice free from infection were experimentally infected with Plasmodium berghei. The animals showed detectable parasitemia on day 4 post-infection with about 30 % of parasitemia recorded before death of animal. Packed cell volume (PCV) level decreased with increase in the post infection days. The PCV values in all the infected treated experimental animals were significantly different (p≤0.05) from the infected untreated animals. Other heamatological parameters which include HB and WBC decreased with increased parasitemia. A decrease in packed cell volume an index of anaemia was observed in the Plasmodium berghei infected mice. Clinical signs observed during the course of treatment ranged from diarrhea, anaemia, loss of appetite, loss of weight to cerebral hemorrhage and splenomegaly.

Malaria is the most important of the parasitic disease of humans, and its neurological complications cerebral malaria is arguably one of the most common non-traumatic encephalopathies (Marsh et al., 1995; Newton et al., 2000). The majority of malaria deaths are due to cerebral complications (Wright, 2005), where most of the deaths occur in Africa and in children under the age of 5 years (Breman, et al., 2004; Greenwood et al., 2005; Winstanley, 2000).Cerebral malaria, which may be characterized by delirium, convulsions, stupors or comma has conventionally being explained as resulting from blockage of the cerebral blood supply because of parasitized erythrocytes (Aikawa, 1988). The most common and important complications of P. falciparum infections in children are cerebral malaria, severe anemia, respiratory distress (acidosis), and hypoglycaemia. Severe anemia and hypoxena have been reported to be able to cause cerebral dysfunction, particularly in children (Kakkilaya, 2006).

The most common manifestation of severe disease in malaria is marked by aneamia related to red cell loss and cytokine-related bone marrow suppression (Daily, 2006). Anemia has long been established in human and animal malaria (Carter and Diggis, 1977). It also represents the main pathological feature in experimental animal infected with Plasmodium berghei (Janse and Waters, 2006). In Africa, profound anemia is presently a common feature in children who had suffered from repeated Plasmodium falciparum infections. Children with hyperparasitaemia may develop severe anemia rapidly. Over half of malaria deaths are attributed to severe malaria anemia (Murphy and Breman, 2001). Malaria is clearly and extremely important causative factor of anemia (Rogerson, 2006). The mechanism of anemia in malaria is still speculative. It may be due to the destruction of the red blood cell by the invasion of the red blood cell by the plasmodium parasite (Jasen and Waters, 2006).

The indigenous medicinal plants in Nigeria form an important component of the natural wealth of the country. Most of these plants have been used indiscriminately by many local populations for managing various diseased states without actually knowing how relief is brought about or its safety/toxicity risk (Yakubu, et al; 2007). One of such plants is neem (Azadirachta indica).

Haematological parameters are those parameters that are related to the blood and blood-forming organs. The haematological and lipid serum examination is among the methods which may contribute to the detection of some changes in health status, which may not be apparent during physical examination but which affect the fitness of the animals (Kronfied, 1969).

Mature Swiss albino mice (20-25g) of either sex free from infection, were obtained from the animal house facility from the department of Pharmacology and Clinical Pharmacy, Ahmadu Bello University, Zaria, Nigeria. They were stabilized for seven days in the laboratory before being used for experiments. The animals were maintained in a well ventilated room, with temperature of 25 ± 1°C, fed on Excel feeds (Feed Masters Ilorin) and water ad libitum.

2.2. Inoculation and Treatment of Albino Mice

Malaria parasite (Plasmodium berghei, Anka strain) was obtained from Prof. Jacob Golenser of Kuvin Medical Centre, Hebrew University of Jerusalem. The strain was maintained in the laboratory by serial blood passage from mouse to mouse. The inoculation and treatment of albino mice had been described earlier by Akin-Oanaiye et al (2013), using the methods of Peter and Anatoli (1998) and David et al (2004) respectively. The haematological indices were later carried out.

The stem bark and leaf were cut into smaller pieces and dried in the laboratory and dried seeds collected, were processed and the kernel removed, then the samples were powdered and kept at room temperature in a well-closed amber coloured bottle until extracted. Hundred grammes of each sample were extracted by mixing with 500 ml methanol thoroughly shaken, and left for twenty four hours at room temperature. The extracts were then filtered and concentrated under vacuum in a rotatory evaporator which yielded about 18 % of gummy residue, as extracts of plant parts. The extracts were kept in a tightly closed bottle in a refrigerator until used for anti-malarial testing.

2.5. Experimental Design and Treatment of Animals

Thirty two mice were used and they were divided into eight groups (A, B, C, D, E, F, G and H) of four each. The mice were infected by method described by Peter and Anatoli (1998) and David, et al (2004), with 0.2ml of diluted (108 parasitized erythrocytes/ml) infected blood each intraperitoneally (i.p) except those in group H that form normal control group.

Treatment of mice in experimental groups A to F commenced 2 h after infection at a dose of 10mg/kg body weight and treatment was repeated daily with the same dose for 72 h. The Neem extracts were dissolved in dimethyl sulfoxide (DMSO) and 13% Ethanol.

Group A – Control (infected with no treatment)

Haematological indices packed cell volume (PCV) white blood cell (WBC) and haemoglobin level (HB) of all the animals treated were assessed. PCV was determined using microhaematocrit analysis (Dacie and Lewise, 1984). Serum protein and WBC were determined using the method of Plumer (1978), Esievo and Saror (1992). Animals were tail bled and the blood collected in heparinised capillary tubes. One end of each tube was sealed and later centrifuged. The packed cell volume and the plasma protein values were then recorded. 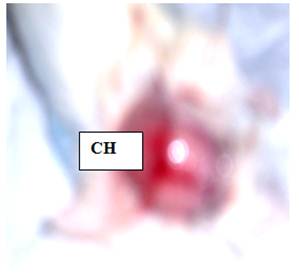 Albino mice were experimentally infected with about 1x 107 Plasmodium berghei intraperitoneally. They started showing noticeable parasitemia on day 3-post infection (p.i). About 30% parasitemia was recorded before the death of the animals. Microscopic views of Giemsa stained thin blood smears showed the P. berghei parasites as intracellular parasites, which caused enlargement of infected cell and produced stainable alteration on the red cell membrane (Akin-Osanaiye, et al; 2013). Clinical signs observed during the course of treatment ranged from diarrhea, anaemia, loss of appetite, loss of weight to cerebral hemorrhage (Plate 1) and spleenomegaly (Plate 2).

Packed cell volume (PCV) values in all the groups before infection varied from 47% to 56%, while for the treated animals varied from 33.68% to 39.67% at 2hrs post-infection (Table 1). Other haematological parameters which include Hb and WBC decreased with increased in parasitemia. The percent PCV decreased with increased in the level of percent parastized red blood cells (pRBCS).

The white blood cell (WBC) counts increased significantly (p≤0.05) with increase in parasitemia count during infection and treatment while there was no significant (p≥0.05) increase in the WBC of the post treated mice that survived after three months of treatment.(Table 2).

There were changes in the haematological parameters of the treated and infected untreated mice. In the untreated mice, the parasite count increased and the haematocrit packed cell volume descreased markedly from day to day until the death of the animal which was also observed in previous studies (Ayodele, 1979; Dawitt et al., 2006). This may be as a result of destruction of red blood cells by the invasion of the P. berghei parasite which may lead to erythrophagocytosis.

Anaemia due to haemolysis of erythrocytes or endotoxaemia and thrombocytopenia (due to platelet sequestration in the spleen) has been reported in plasmodiosis (Bradley et al., 1987). In the present study, partial haemolysis of blood was observed in the microhaematocrit tubes during PCV determination and mice with such partial haemolysis had corresponding low PCV. As the level of parasitemia was increasing, the PCV level also decreased which essentially signals the onset of anaemia. Some infected mice had much higher PCV values than their pre-infection values, and the same was observed in some other mice during treatment. This may be due to dehydration during infection as a result of pyrexia that normally accompanies fever. It takes quite some time for lost fluid to be replaced through a natural process post therapy and this may explain partially why some infected mice had higher PCV values post treatment than the preinfection values (Ononiwu and Useh, 2005). The PCV values recorded for the mice treated with ATM (Arteether) was significantly (P<0.05) lower than that of the normal mice which was in agreement with what was reported earlier that Artemether caused significant reduction (P<0.05) of the hematological profile of the animals in a dose dependent manner (Osonuga et al, 2012). Discontinuation of the drug use however showed gradual recovery of the depressed indices of the blood parameters.There was no remarkable change in the PCV of the control (normal) groups in all the course of treatments. The white blood cell (WBC) counts increased significantly (p≤0.05) with increase in parasitemia count during infection and treatment while there was no significant (p≥0.05) increase in the WBC of the post treated mice that survived after three months of treatment. The increase in the WBC can be attributed to the role it plays during infection. They play a vital role in the body’s immune system which is the primary defense mechanism against invading bacteria, viruses, fungi, and parasites. They often accomplish this goal through direct attack, which usually involves identifying the invading organism as foreign, attaching to it, and then destroying it, a process referred to as phagocytosis (Ononiwu and Useh, 2005). The haemoglobin (Hb) count also reduced significantly (p≤0.05) with increase in parasitemia and this may account for the anaemic nature observed in the infected mice which was characterized by paleness of the tail and ears of the infected animals and the watery nature of the blood at high parasitemia level.

The cerebral haemorrhage observed may be because P. berghei ANKA is a lethal strain of malaria that causes experimental cerebral malaria (ECM) in rodent models. Pathology of the disease is associated with the sequestration of the infected RBC in the micro vessels of brain (Kota et al., 2006).

There were alterations in the haematological parameters of the treated and infected untreated mice. As the level of parasitemia was increasing, the PCV level also decreased and the haemoglobin (Hb) count also reduced significantly (p≤0.05). This may account for the anaemic nature observed in the infected mice which was characterized by paleness of the tail and ears of the infected animals and the watery nature of the blood at high parasitemia level. The WBC counts also increased significantly (p≤0.05). A decrease in packed cell volume is an index of anaemia (Esievo et al., 1982), was observed in the Plasmodium berghei infected mice.