In this study the chemistry of chalcones has generated intensive scientific interest due to their biological and industrial applications. Chalcones are natural biocides and are well known intermediates in the synthesis of heterocyclic compounds exhibiting various biological activities. Chalcones and their derivatives possess some interesting biological properties such as antibacterial, antifungal, insecticidal, anesthetic, antiinflammatory, analgesic etc. Different methods are available for the preparation of chalcones. The most convenient method is the Claisen-Schimdt condensation of equimolar quantities of arylmethylketone with aryl aldehyde in the presence of alcoholic alkali, In the Claisen-Schmidt reaction, the concentration of alkali used, usually ranges between 10 and 60 %. The reaction is carried out at about 50 C for 12-15 hours or at room temperature for one week.

The chemistry of chalcones has generated intensive scientific studies throughout the world. Especially interest has been focused on the synthesis and biodynamic activities of chalcones. The name "Chalcones" was given by Kostanecki and Tambor. These compounds are also known as benzalacetophenone or benzylidene acetophenone. In chalcones, two aromatic rings are linked by an aliphatic three carbon chain. Chalcone bears a very good synthon so that variety of novel heterocycles with good pharmaceutical profile can be designed. Chalcones are -unsaturated ketone containing the reactive ketoethylenic group –CO-CH=CH-. These are coloured compounds because of the presence of the chromophore -CO-CH=CH-, which depends on the presence of other auxochromes. [1,2] Chalcones are used to synthesize several derivatives like cyanopyridines, pyrazolines isoxazoles and pyrimidines having different heterocyclic ring Systems [3]. As shown in Fig. 1.

The chalcones are associated with different biological activities like Insecticidal, anticancer, anti-inflammatory, bactericidal, fungicidal, Antiviral, antitumor, antimalarial and antiulcer [4]. The presence of -unsaturated carbonyl system of chalcone makes it biologically active145. They have shown antibacterial activity against S. aureus, E. coli, C. albicans, T. utilis, S. sake, W. anomala and some other organisms [5]. Pyrazole is a class of Compounds, which has many applications in different field. One of the methods for the synthesis of such compound is from unsaturated carbonyls (chalcone) by the cyclization with hydrazine and substituted hydrazine. Pyrazole and their derivatives are considered to be important for drugs and agricultural chemicals. Some substituted pyrazoles and their derivatives have been reported to possess several interesting biological activities such as hypnotic properties, antimicrobial, antitumor and antifungal. Many pyrazoles are used for the treatment of thyroid and leukemia. It has incidental antiviral activity against Herpes infections [6]. 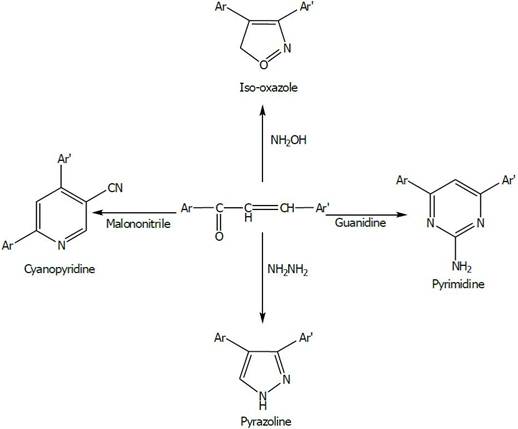 Different methods of nomenclatures for chalcone were suggested at Different times. The following pattern has been adopted by "Chemical Abstracts" published by the American chemical society [7] such as shown in Fig. 2, 3.

The British Chemical Abstract and Journal of Chemical Society have followed the following system [7].

Figure 3. The British Chemical Abstract and Journal of Chemical Society [6].

Thanh-Dao Tran et. al [10] synthesis and antibacterial activity of some heterocyclic chalcone analogues alone and in combination with antibiotics, a series of simple heterocyclic chalcone analogues have been synthesized by Claisen Schmidt condensation reactions between substituted benzaldehydes and heteroaryl methyl ketones and evaluated for their antibacterial activity. The structures of the synthesized chalcones were established by IR and 1H-NMR analysis, such as in the Fig. 6. 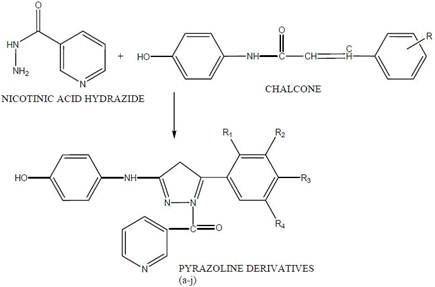 Samer A. Hasan et.al [12] Synthesis of new diclofenac derivatives by coupling with chalcone derivatives as possible mutual produgs.  The structure of the synthesized derivatives has been characterized by elemental Microanalysis (CHN), FTIR spectroscopy, and other physicochemical properties. The anti-inflammatory activity of the synthesized fluorinated chalcone derivative was performed using the cotton pellet-induced granuloma in rats as a model, and found to be comparable to dexamethasone in this regard such as in the Fig. 8.

Hocine Aichaoui et.al [13] synthesis and pharmacological evaluation of antioxidant chalcone derivatives of 2(3H)-benzoxazolones, so chalcones featuring an analgesic/anti-inflammatory pharmacophore, i.e., The 2 (3H) -benzoxazolone heterocycle such as in the Fig. 9. 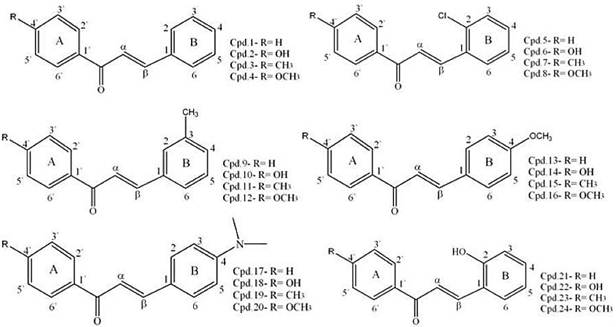 J. J. Vora et.al [15] Synthesis and antifungal activity of some novel chalcones containing pyrazole moiety, various chalcone derivatives of 1-(4-methyl sulfonylphenyl)-3-(1, 3-diphenyl-1H-pyrazol-4-yl)-2-propen-1-one were Synthesized by condensation of 1, 3-diphenyl-1H-pyrazole-4-carbaldehyde and 4-methyl sulfonylphenyl acetophenone. Chalcone derivatives were characterized by FT-IR, 1H-NMR, Mass spectral analysis and elemental analysis. All the synthesized compounds have been screened for their antifungal activities by using cup-plate method such as in the Fig. 11.

In this work the focus was on Chalcones are also key precursors in the synthesis of many biologically important heterocycles such as benzothiazepine, pyrazolines, 1, 4-diketones, and flavones. Thus the synthesis of chalcones has generated vast interest to organic as well as for medicinal chemists.

In summary, we have synthesized some chalcones and identified them from their spectral data. We have most of the compounds were very active biological agents, chalcones and pyrazole derivatives were synthesized. Compounds with electron releasing groups such as methoxy and hydroxyl showed better antibacterial activity than other not having such groups structures of the synthesized substituted chalcones were confirmed from their respective IR, 1H- NMR Studies. From the antimicrobial screening it was observed that all the compounds exhibited activity against all the organisms employed.

The author would like to acknowledge the Faculty of Pharmacy, University of Karbala in carrying out this research work.