The synthesis and characterization of mixed ligand complexes of Fe (III) with tartaric acid/succinic acid and heterocyclic amines. These complexes were characterized on the basis of elemental analysis, conductometric, magnetic measurements, UV-vis, IR spectral studies. All the complexes were found electrolytic and paramagnetic in nature with high spin octahedral structure. The synthesized complexes showed moderate to strong antimicrobial activity.

Succinic acid, derived from fermentation of agricultural carbohydrates, has a specialty chemical market in industries producing food and pharmaceutical products, surfactants and detergents, green solvents and biodegradable plastics, and ingredients to stimulate animal and plant growth (Zeikus et al., 1999). Succinic acid (Suc) is involved in the citric acid or tricarboxylic acid (TCA) cycle and the glyoxalate cycle. It is synthesized in almost all microbial, plant, and animal cells (Song and Lee 2006). Suc is a bidentate ligand. In coordination chemistry, it forms strong complexes with many metal ions (Gandham and Rao 2012).

All chemicals were commercial products and were used as supplied. Melting points of all metal complexes were measured by an electro thermal melting point apparatus model no. AZ6512. The SHERWOOD SCIENTIFIC Magnetic Susceptibility Balance was used for magnetic moment measurements. Infrared spectra (KBr) were recorded in a SIMADZU FTIR- 8400 (Japan) spectrophotometer in the range 4000 – 400 cm–1.

2.2. General Method for the Preparation of the Complexes

General method for preparation of the Fe(III) complexes of [Fe(Tar)L4]Cl and [Fe(Succ)L4]Cl; Where, L = Pyridine, Quinoline, and Iso-quinoline and 2-Picoline, Tar=Tartaric acid and Succ = Succinic acid.

An ethanolic solution of Fe(III) chloride (1 m mole) and deprotonated tartaric acid (1 m mole) or succinic acid (1 m mol ) were mixed with constant stirring but no precipitate was observed. Then 25 ml of an ethanolic solution of L (4 m mole) was added to the resulting mixture and heat on a magnetic regulator hot plate with constant stirring. The volume of the solution was reduced to one half and allowed to cool. The precipitate formed and were filtered, washed several times with ethanol and then dried in a desiccator over anhydrous CaCl2.

Table 2. Data of the elemental analysis of the complexes.

The IR spectrum of the complexes showed characteristic bands at around 1466 cm-1, 2910 cm-1, 1615 cm-1, 1303 cm-1, 552 cm-1, and 486 cm-1 corresponding to the n(C=N), n(CH), n(C=O) n(C-O) n(M-O) n(M-N) stretching frequencies, respectively (Table 3). The ligand Tartaric acid co-ordinates to the Fe(III) ion through the carboxylic acid group as the n(M-O) and n(C-O) bands of the complex present in IR spectra. The free hetero amine ligand shows n(C=N) band at 1815 cm-1. The lowering of the stretching frequency suggested that the heterocyclic amine bonded to metal through the nitrogen atom. The bands of the complexes at 412 cm-1 is undoubtedly to the (M - N) modes.In case of first four complexes, the presence of IR band at 3400 cm-1indicated that the OH group did not make bond to the metal ion.

Table 4. Selected electronic spectral data for the complexes in nm.

Metal complexes play an important role in regulating biological activities. The disk diffusion method was employed for the in vitro study of antibacterial effects against one Gram positive and two Gram negative bacteria. On the other hand antifungal activities of the metal complexes against two pathogenic fungi Candida albicuas (Human Pathogens) and Aspergillus species (Plant Pathogens) were measured. The results revealed that the complexes are more microbial toxic than the free metal ions or ligands (Md. Kudrat-E-Zahan et al., 2015). Fe(III) complexes showed moderate to strong antimicrobial activity as shown in table 5 and 6.

Elemental analysis correspond to metal: ligand stoichiometry for Fe(III) complexes are 1:1:4. Magnetic susceptibility measurement indicated the paramagnetic nature of the complexes. The IR spectral data shows the ligand coordinate with the metal through O and N atoms. The electronic spectral data are in conformity with the transitions of octahedral Fe(III) complexes. Based on these facts structure of complex have been proposed as shown in Figure 1 and 2. 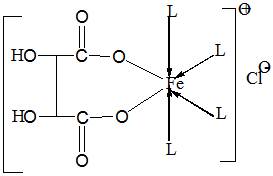 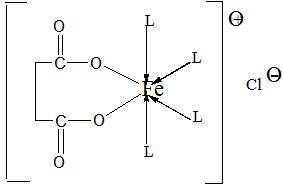