The density functional calculation with the generalized gradient approximation is applied to study the structural, properties of AlnGan clusters up to n=12. At the same time the frequency was performed when the structure optimization in order to assure the calculated-ground states were real low-lying. The nearest-neighbor distance, total energy, electron affinities and HOMO-LUMO gap were presented and discussed to prove the calculations. Some magic clusters in neutral, cationic, and anionic form compared to its neighboring clusters are argued according to the calculated results of the second energy difference and electronic properties.

In recent study, the structural and electronic properties of small clusters has become a subject of academic, scientific, and technological interest [1-2]. A mental cluster consists of two or more elements; the atomic arrangement becomes an additional factor which must be taken into account since a small change in the stoichimetry of the cluster can drastically affect its properties [3]. The study of bimetallic clusters or alloy clusters offer a suitable tool to receive a deeper understanding of microscopic behavior, since cluster science enables one to investigate chemical and physical properties starting from a single atom or molecular level toward bulk phase as a function size. As a result, a number of studies of alloy clusters have been preceded during recent years [4-8]. In the past decades, numerous experimental and theoretical studies have been carried out on semiconductor clusters and bimetallic clusters. The initial input structure is quoted previously published articles of the (AlP)n, (AlAs)n, (InSb)n and (AlN)n [9-12] and replace some of the atoms, or arbitrarily constructed, and then fully optimized through density functional theory (DFT). Thus an intensive learning on the properties of such clusters as a chemistry action of their size could pay increasing attention about the evolution from molecular toward bulk phase. We will calculate the aspects contain the evolution of the average nearest-neighbor distance, binding energy, the second energy difference, ionization potential, electron affinity and HOMO–LUMO gap.

All calculations were performed using the density functional theory (DFT) provided by the Gaussian 03 suite of programs [13]. The density functional is treated with the generalized gradient approximation (GGA) corrected-exchange potential of the B3LYP [14]. We used DFT computations employing the LANL2DZ basis set alongside the corresponding relativistic effective-core potential (ECP) [15]. The specific basis set has been extensively used in the past [16-18] for the study of transition metal clusters with the results indicating that it is adequate for the description of their geometric and electronic properties. For the lowest-energy configurations, frequencies were computed using numerical differentiation of gradients computed in slightly displaced geometries. All of the obtained most stable clusters ate characterized as energy minima without imaginary frequencies.

We have performed calculations on geometries and energetic of aluminum-gallium clusters using the method mentioned above. We first discuss the geometries of the neutral clusters. For the AlGa dimmer with C∞v symmetry, the bond length is 3.212 Å .The ground state structure of (Al2Ga2) cluster is a planar rhombic structure appearing Al and Ga atom alternately with D2h symmetry. The optimized Al-Ga bond length is 2.835Å, and the Al-Ga-Al bond angle is 90.10°. The Ga-Al-Ga bond angle is 89.9°. It is showed that the structure is more like a square.

For the Al5Ga5, the most lowest-energy configuration is the oblique prism capped two atoms Al and Ga in one position with Cs symmetry. The most stable structure of Al6Ga6 is formed by a pentagonal and a hexagon distortion dropped one Al atom inner side with Cs symmetry.

Dropped one Al atom at the center of the hexagon and distorted heptagon with Cs symmetry have the lowest energy of the Al7Ga7 structure, the AlnGan (n=8-11) take the Cs, C3v and Cs structures according to their ground states respectively.

The ground-state configuration of Al12Ga12 is like a distorted hexahedron. The Al and Ga atoms alternately displayed. 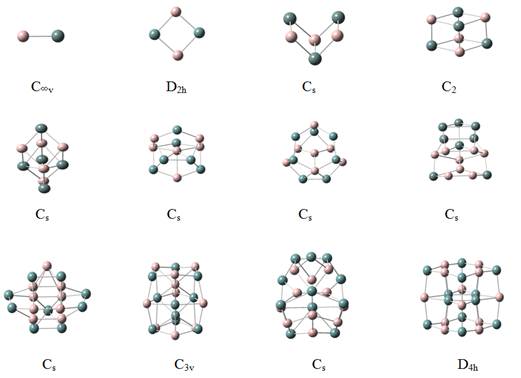 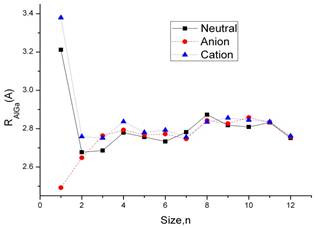 Here Rij is the distance between two atoms i and j with a cutoff = 3.2 Å and nb is the total number of bonds between atoms that below this cutoff. The results are plotted in Figure 2. In the curve,the trend of neutral and anion is similar. The distance of AlGa cation is 2.49 Å. With the cluster size increase the average nearest-neighbor distance of the molecular is similar.

The relative stability of clusters can be studied through the measurement of the mass ion intensities. However, interpretation of these results is not always unambiguous. Note that in mass spectroscopy experiments the clusters have to be ionized before their intensities can be measured. It is not entirely clear if the measured intensity distribution of the clusters represents the stability of the charged clusters or their neutral precursors. For example, if the mass spectra are collected after the ionized clusters have time to relax to their stable configuration, the corresponding mass-ion intensities could be different from the neutral precursors; one has to assume that the charged clusters are formed by single photon ionization and that there are no photo-induced fragmentations of the clusters in the process. These difficulties are manifested in experimental observations that differ from one group to another. 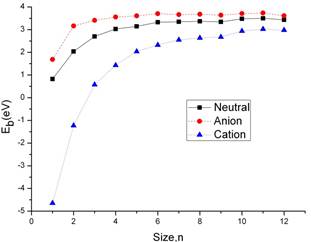 An unambiguous insight into the relative stability of clusters can be gained by analyzing their enenrgy. I first calculate the average binding energy per AlGa pair of neutral clusters. This is defined by Eb(AlGa) = [E(AlnGan)−nE (Al)−nE(Ga)]/n, where E(AlnGan) is the total energy of the neutral cluster (given in Table 1), Whereas in the anionic clusters the negative charge is assigned to a Ga atom in the atomic references, since Ga is more electronegative than Al. And in the cationic clusters, the positive charge is assigned to an Al atom. In Figure 3. I have plotted the average binding energy per AlGa pair, Eb, as a function of the number of AlGa units in the cluster, n. Eb displays the expected behavior, in both neutral and ionic systems:  we can see an increasing curve along with the clusters size adding atoms. When the clusters size is small, n≤6 the slop is large which can be shown in the fig 4. While n≥6 of the size, the curve become gradually flat with a small increase of the binding energy. The image show a message that with the clusters size increasing the clusters may approach to the stationary bulk regime. The evolution of the binding energy per molecule with the cluster size is similar for the anion cluster and cation cluster. 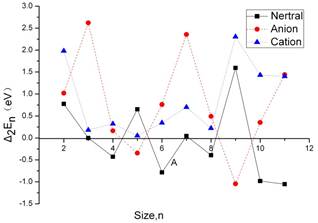 In Figure 4. The second energy difference 2E(AlnGan)−E(Aln−1Gan−1)−E(Aln+1Gan+1) versus the cluster size for neutral and charged system is plotted. The neutral, anion and cation clusters are presented in the graph. We find such behavior for the neutral n = 4, 6, 8, 10 and 11. At n=4 the cubic structures are more stable than their neighboring global minima at n = 3 and 5. The isomer with n=6 is particular more stable than their neighbors. It is a stable structure of the charged very symmetric, the n = 8 cluster is again barely more stable than those with n = 7 and 9, most likely due to the instability of = 7, the latter is exceptionally stable and displays a cage structure with a high number of hexagons. While the AlnGan+(n = 3, 5, and 8) clusters have unusual stabilities according to the corresponding Δ2En values. All of these cluster sizes, related with particularly stable structures, are usually considered as magic numbers. 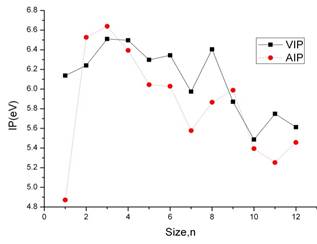 Both vertical and adiabatic values for the electron affinity (EA) for the lowest energy isomers of the aluminum arsenide clusters are computed in this study. The vertical electron affinity (VEA) is the difference in the energy between the ground state of the anion and the energy of the neutral cluster having the anionic geometry. The adiabatic electron affinity (AEA), on the other hand, is the difference in the total energy between the ground state of the anion and the neutral cluster. The vertical attachment energy (VAE) has also been computed, defined as the energy difference between the neutral and anionic clusters with both at the neutral cluster optimized geometry [19]. Although the vertical attachment energy is not currently measured through any experiment, it provides a lower bound to the AEA in the same way as the VEA is an upper bound to it [19]. The calculated values of the above quantities for the AlnAsn cluster are displayed in Figure 6. The relative order of the VEA, AEA, and VAE is almost similar with expected conclusion. It is observed that the electron affinity increases when the cluster size increase for that the Ga atom has more electronegativity. From the graph it can be shown the VEA and AEA has the same tendency of decrease. 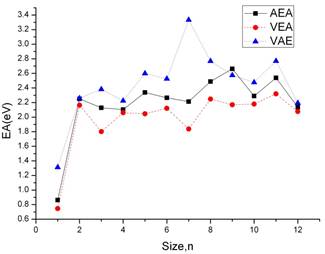 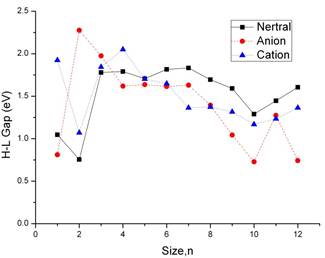 Using density functional theory and generalized gradient approximation, We have calculated the ground state geometries of neutral, positively charged and negatively charged aluminum gallium clusters in the size range of n = 1-12. The evolution of the binding energy, electronic structure, ionization potentials, and electron affinities are calculated. The results can be summarized as follows:

(1)  The nearest neighbor distances that both neutral and charged show a similar tendency except n=1.

(2)  The distribution of the atoms Al and Ga is very symmetrical to keep stable.

(3)  The second energy difference Δ2En shows a distinct peak at neutral AlnGan n= 4, 6, 8, 10 and 11. and cationic AlnGan n = 3, 5, and 8. All of these cluster sizes related with particularly stable structures, are usually considered as magic numbers.

(4)  For the clusters of AlnGan, when n≥3 the ionization potential have the tendency of decrease.

(5)  For the clusters of AlnGan, The electron affinity curve have a slightly rise tendency.