Solutions of Reactive Yellow 17 (RY17) azo dye were degraded by electro-Fenton process (EF) using an undivided electrochemical cell containing a boron doped diamond (BDD) electrode. A 24factorial design considering the initial Fe2+ and dye concentrations, the applied current and the electrolysis time as variable independents was used to analyze the process by response surface methodology. The maximum decolorization efficiency attained 99.94%, in the response of variations in the experimental conditions, which confirms the electro-Fenton process ability and also importance of the process modeling. The ANOVA analysis confirmed that all of the variables have significant influence on the model response and showed a high coefficient of determination value (R2= 0.9938). Graphical response surface and contour plots were used to locate the optimum point. The optimum values of the process variables for the maximum decolorization efficiency (100 %) were Fe2+concentration = 0.04 mM, applied current = 100 mA, RY17 concentration = 5 mg/L and electrolysis time =30 min.

Azo dyes are toxic to aquatic microorganisms, carcinogenic and mutagenic to humans and are not efficiently degraded by conventional aerobic wastewater treatments because they persist under natural oxidation and reduction conditions, light exposure and biodegradation [1].

In recent years, various technologies have been developed for environmental pollutants remediation. Among them, advanced oxidation processes (AOPs) have received great attention for removal of hazardous organic pollutants from contaminated water [2]. Among AOPs, oxidation with electrochemical and Fenton’s reagent has been considered to be a promising and attractive treatment technology for degradation and decolorization of wastewaters [3].

In the EF process, H2O2 is continuously supplied to an acidic medium from the two-electron reduction of added O2 at the cathode by reaction (1). The addition of a small Fe2+concentration to the solution enhances the oxidation power of electrogenerated H2O2 giving .OH and Fe3+ from Fenton reaction (2), which is promoted by the catalytic action of the Fe3+‏/Fe2+‏ system, mainly from the regeneration of Fe2+‏ by the cathodic reduction of Fe3+‏ from reaction (3) [4].

The best anodes for this procedure are non-active boron doped diamond (BDD) thin-film electrodes because they interact very weakly with physisorbed BDD (.OH) produced by reaction (4) and promote a much greater O2-overpotential than other conventional anodes like Pt, DSA and PbO2 [5-7], enhancing the mineralization of azo dyes due to the efficient removal of ultimate generated carboxylic acids [8,9].

The Response Surface Methodology (RSM) is an efficient experimental strategy for determining the optimal conditions. This method is a collection of statistical and mathematical techniques used for development, improvement, and optimization of certain processes in which a response of interest is affected by several process variables and the objective is to optimize this response [10]. Recently, this methodology has been applied to the optimization of several AOPs such as Fenton, photo-Fenton, photocatalysis (UV/TiO2), hydrogen peroxide photolysis (UV/H2O2), and electrochemical techniques like electrocoagulation, electro-Fenton and photoelectro-Fenton [11,12].

In the present study, the Reactive Yellow 17 (RY17) dye was degraded by the electro-Fenton process, using a BDD electrode as cathode for H2O2 production. The independent parameters of applied current, dye and Fe2+ concentrations were evaluated. Experimental data were optimized by means of 24 factorial design and Response Surface Methodology (RSM). 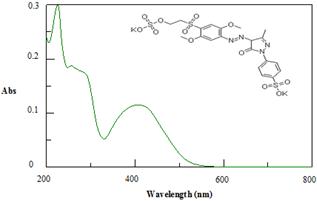 The Reactive Yellow 17 (RY17) is the synthetic organic dye used in the textile industries. The molecular formula of RY17 is C20H20N4O12S3.2K and the corresponding molecular weight is 682.77 g/mol and has λ max at 408 nm. Figure 1 shows the chemical structure and UV spectrum of RY17. Ferrous sulphate heptahydrate (FeSO4, 7H2O), sodium sulfate (Na2SO4) and Sulphuric acid (H2SO4) were purchased from Fluka, Labosi and Riedel-de Haen respectively. All these chemical substances were of reagent grade and used without further purification. All the solutions were prepared from distilled water and were conducted at room temperature.

Degradation of RY17 by the electro-Fenton process was performed in an undivided electrochemical cell of 0.5L equipped with two electrodes (Figure 2). The working electrode was a carbon felt piece (6*8*0.5cm3), a flexible material, resistant and easy to handle. The counter electrode was a boron-doped diamond (BDD) thin film (5*8*0.2 cm3).The applied current between these electrodes was available by a stabilized supply source. Prior to the electrolysis, compressed air was bubbled for 10 min through the cell to saturate the aqueous solution in oxygen. A concentration of sodium sulfate of 50 mM (Na2SO4) was added to the solution as the supporting electrolyte. The iron sulfate (FeSO4, 7H2O) catalyzing the Fenton reaction was added to the reaction medium before the beginning of the electrolysis. The pH of solutions was adjusted to 3 by sulphuric acid (10-3M) to avoid the precipitation of ferric ions in the form of hydroxides. The solutions were homogenized by a magnetic stirrer (600 rev/min). The samples were taken manually by a micropipette at definite time intervals and they were analyzed by UV/Vis spectroscopic technique using JASCO V-630 Spectrophotometer. 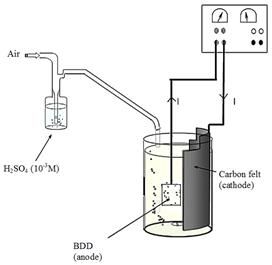 RSM is a statistical method being useful for the optimization of chemical reactions and/or industrial processes and widely used for experimental design [13]. The leading objective of this method is to optimize the response surface that is influenced by different independent variables. RSM also identified the relationship between the controllable input parameters and the response variable [14].

In the present study a 24 factorial design, which is a widely used form of RSM, was applied to the optimization of the EF/BDD degradation of RY17 dye. Preliminary experiments were carried out to limit the extreme values of the variables. The selected parameters in the current study were the Initial Fe2+ concentration (A), applied current (B), the initial dye concentration (C) and the electrolysis time (D) as the variables and the decolorization efficiency (DE) value as the response. A total of 16 experiments were made in this analysis, and they were analyzed using the Design Expert Version 9.0.3. The factor levels were selected taking +1 as the high level and -1 as the lower level.

3.1. Modeling of the Process 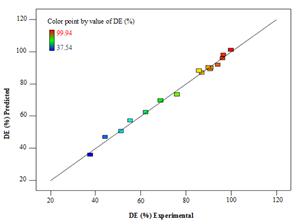 From the results obtained in the trials performed with the 24 factorial designs, the following hierarchical first-order response equation was established to correlate the dependent and independent variables:

Table 1. Experimental range and levels of the independent varibales used in terms of the reals and coded factors.

Table 2. ANOVA test for the response model of the RY17 using Electrofenton process.

The suggested model adequacy was checked further using ANOVA analysis and the results have been shown in Table 2. ANOVA subdivides the variation of the results to variation associated with the model and experimental error, respectively, demonstrating if the variation from the model is significant or not when compared with residual error. F-value is the ratio of the mean square of the model and residual error. When F-value is greater than the tabulated value for a definite number of degrees of freedom in the model at a significance level of α, the model is suitable for describing the results [15]. The model F-value of 80.15 implies the model is significant, at 95 % confidence level. There is only a 0.01 % chance that a "Model F-value" this large could occur due to noise.

The adequacy of the above model was also evaluated by the residuals. Normal probability plots are a suitable graphical method for judging the normality of the residuals [16]. The diagnostic of studentized residuals exemplified in Figure 4 evidences that the residual behavior follows a normal distribution and is linear, which is the more important assumption for checking statistical modeling. 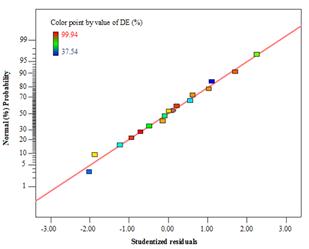 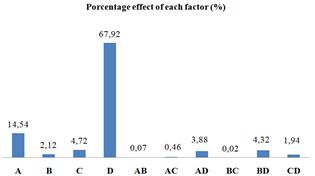 The three-dimensional (3D) response surface and two dimensional (2D) contour plots of the model-predicted responses, while two variables kept at constant and the others varying within the experimental ranges, were obtained by the Design-Expert software for EF/BDD treatment of synthetic RY17 dye. Response surface plots provide a method to predict the decolorization efficiency for different values of the tested variables and the contours of the plots help in identification of the type of interactions between these variables [18]. 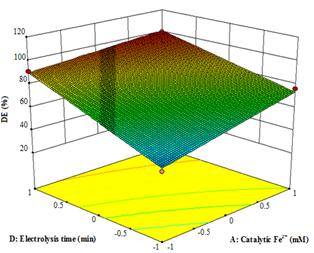 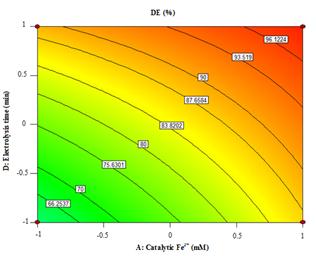 Figure 6. The response surface and contour plots of the decolorization efficiency (DE %) as the function of catalytic Fe2+ (mM) and electrolysis time (min) for applied current of 100 mA and 5 mg/L of RY17. 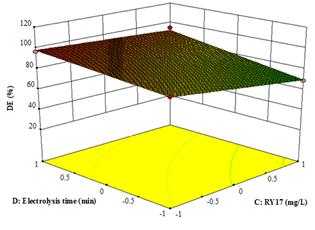 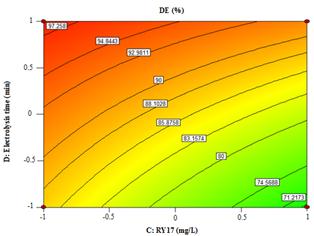 Figure 7. The response surface and contour plots of the decolorization efficiency (DE %) as the function of RY17 (mg/L) and electrolysis time (min) for applied current of 60 mA and at 0.04 mMcatalytic Fe2+. 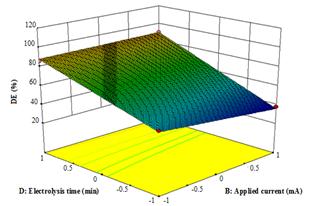 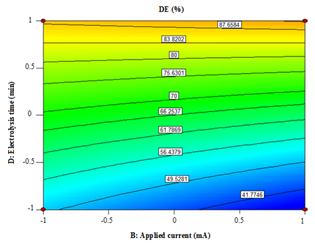 Figure 8. The response surface and contour plots of the decolorization efficiency (DE %) as the function of applied current (mA) and electrolysis time (min) at 0.02 mM catalytic Fe2+and 10 mg/L of RY17.

Moreover, when the electrolysis time increased, this response increased considerably at the lowest applied current of 60 mA and strongly enhanced at the highest current density of 100 mA. The maximum decolorization efficiency for 10 mg/L RY17 at 30 min was 90.17 % at the lowest current density of 100 mA and the highest catalytic Fe2+ concentration of 0.02 mM.

The main objective of the optimization is to determine the optimum values of variables of EF/BDD process from the model obtained using experimental data. The optimum values of the process variables for the maximum decolorization efficiency are shown in Table 3. Verification experiments performed at the predicted conditions derived by from ridge analysis of RSM demonstrated that the experimental value was reasonably close to the predicted value as shown in Table 3, which indicating the validity and adequacy of the predicted model.

Table 3.Comparison of experimental and predicted values of response (DE %) at the optimal levels predicted by RSM.

In this study, degradation of Reactive Yellow 17 (RY17) was investigated using electro-Fenton system. The decolorization efficiency was analyzed by RSM considering a 24 factorial design. The maximum of 99.94 % was obtained at the optimum conditions as follows: initial Fe2+ concentration (0.04 mM), applied current (100 mA), initial RY17 concentration (5 mg/L) and electrolysis time (30 min). Based on experimental results, an empirical relationship between the decolorization efficiency and independent variables was obtained and expressed by the hierarchical first order Eq (5). Analysis of variance showed good coefficient of determination values (R2= 0.9938). Effect of experimental parameters on the decolorization efficiency of RY17 was established by the response surface and contour plots of the model predicted responses. Agreement of the predicting model with the experimental data at the optimum conditions was satisfactory, which confirms the adequacy of the model.