2Department of Mathematics, GSSS Institute of Engineering and Technology for Women, Mysore, India

The present paper investigates the effect of localized wall heating/cooling on the unsteady, MHD laminar boundary layer decelerating forced flow of an incompressible electrically conducting fluid over a wedge. The set of non-linear partial differential equations governing the semi-similar flow has been solved numerically using an implicit finite difference scheme along with the quasilinearization technique. Numerical computations has been carried out and the results are presented graphically to show the effect of various physical parameters such as unsteady parameter, magnetic parameter, wall heating/cooling parameter on the flow field and heat transfer characteristics. It is found that the dual solutions exist for critical values of the unsteady parameter. Further, the magnetic field plays a significant role in controlling the boundary layer separation.

The study of laminar boundary layer flows is always important from the view point of engineering and technology. The two-dimensional incompressible laminar boundary layer flow passing over a wedge was first introduced by Falkner and Skan [1]. In the past few years several investigations [2-10] have been reported in the literature focusing on this topic using various methods which is suitable for the flow and heat transfer phenomena. In recent years, the application of a transverse magnetic field on boundary layer flow control has made a great impact in the study of magnetohydrodynamic (MHD) flow and heat transfer problems having technological applications in modern metallurgical and metal-working processes. MHD effects on the Falkner-Skan wedge flow are studied by Kafoussias [11] and Devi [12].

The main purpose of the present paper is to discuss the unsteady laminar boundary layer forced convection decelerating flow of an electrically conducting fluid over a sharp wedge in the presence of a transverse magnetic field with localized wall heating/cooling. The nonlinear parabolic partial differential equations governing the semi-similar flow have been solved numerically using an implicit finite difference scheme along with quasilinearization technique. The present analysis may be useful in industrial applications dealing with controlling as well as stabilization of the boundary layer. It may be mentioned here that the counter part of the present investigation pertaining to the accelerating flow has been studied more recently by Poornima and Eswara [18].

is measured along the surface of the wedge and

is normal to it. The unsteadiness in the flow field is introduced by the free stream velocity

is applied in the direction normal to the wedge surface and, it is assumed that the magnetic Reynolds number is small, so that the induced magnetic field can be neglected. Hence, the applied magnetic field contributes only to the Lorentz force which acts in the

- direction. No electric field is assumed to exist and the Hall effect is negligible. The fluid properties are assumed to be constant. 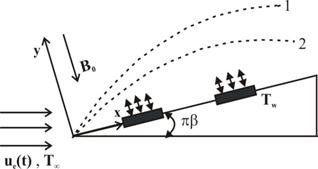 except at certain portions of the wedge

where it varies slowly with the streamwise distance

Under the aforesaid assumptions and neglecting the viscous dissipation, the non-linear boundary layer equations governing the unsteady, MHD forced convection flow past a wedge are

The boundary conditions to be satisfied by the above equations are:

are respectively, velocity components in

-directions of the flow;

is the inviscid flow velocity at the edge of the boundary layer ;

is the thermal diffusivity of the fluid; T is the temperature in the vicinity of the wedge; T0 is the constant temperature; t and t* are dimensional and dimensionless time;

is the Falkner-Skan power-law parameter; The subscripts

denote conditions at the wall and in the free stream respectively;

is a dimensionless constant and,

or < 0, according to whether the wall is being heated or cooled. For

, the entire wall is maintained at constant temperature

value is zero, the problem reduces to steady case. For the nonzero value of

, the flow is accelerating if

and, the flow is decelerating if

.Assuming the value zero to

, the problem reduces to the steady case. It is appropriate to point out here that numerical results pertaining to decelerating flow are obtained and discussed in this paper, since results of accelerating flow are already been published in a reputed  journal. 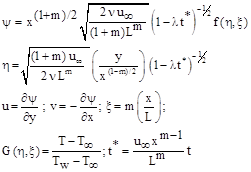 The transformed boundary conditions are:

is the local Reynolds number,

is the Prandtl number;

are the transformed coordinates;

is the pressure gradient parameter. Here prime ( ' ) denotes derivate with respect to

represents partial derivatives with respect to

is connected with the apex angle

. It is noted that the dimensionless wall temperature G (

,0) given in the boundary condition (9) is a continuous function of the dimensionless streamwise distance

with a small change in the interval

over the constant value 1. The increase or reduction in the wall temperature in the interval by the constant value introduces a finite discontinuity at the leading and trailing edges of the slot and this causes difficulties in the solution of the equation. In order to avoid these difficulties in obtaining stable numerical solutions, a non-uniform distribution of wall temperature in the interval

has been taken, which varies slowly with

and is continuous in the slot

The quantities of engineering interest are the local skin friction and heat transfer coefficient in the form of Nusselt number, and these are expressed, respectively, as:

It is worth mentioning here that when

which have been considered recently by Poornima and Eswara [17], representing the steady counterpart

of the present investigation. 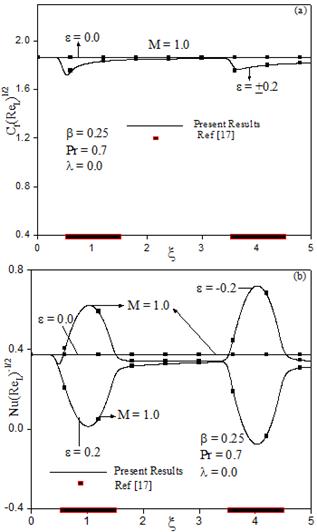 Fig. 2. Comparison of (a) skin friction coefficient and (b) heat transfer coefficient when

with those of Poornima and Eswara [17].

The system of non-linear partial differential equations (6) and (7) along with the boundary conditions (9) has been solved numerically employing an implicit finite difference scheme along with quasilinearization technique [19]. It may be noted that for computation purpose, two slots have been located at the intervals [0.5, 1.5] and [3.5, 4.5] and the surface is heated or cooled in these intervals only. In the remaining portion of the wedge surface, the surface is non-permeable and is maintained at constant temperature

. In fact, analysis has been carried out for the wedge angle 45o i.e.

, as the Falkner-Skan one-parameter family of solutions of the boundary layer equations has proved to be very useful in the interpretation of fluid flows at large Reynolds number.  The results are illustrated graphically and are presented in Figs. 3-6.

In order to assess the accuracy of our numerical method used, we have compared the steady state results with those of White [20] [See Table 1], and Poornima and Eswara [17] [See Fig.2]. The results are found to be in excellent agreement.

Table 1. Comparison of numerical results for the case of 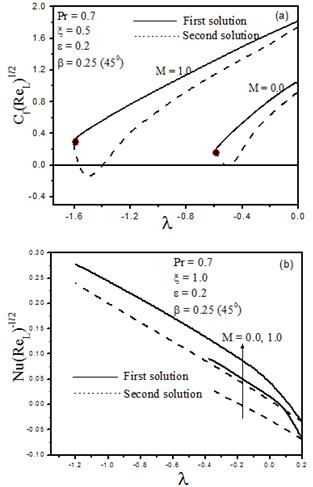 Fig. 3. The effect of magnetic field on (a) skin friction coefficient and (b) heat transfer coefficient in the presence  of wall heating (

Fig. 3, shows the effect of increase in the magnetic field on skin friction and heat transfer coefficients for

. It is clear that, as M increases both

increases. Meanwhile, the existence of the dual solution for the localized wall heating (

is a critical value of

Indeed, dual solutions exist up to a critical value

when M increases from 0.0 to 1.0. It is significant to observe the role of magnetic field in the process of stabilization of the boundary layer decelerating flow during this short time. Similar trend is obtained for localized wall cooling ( 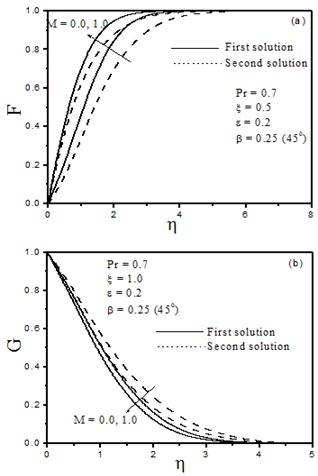 Fig. 4. The effect of magnetic field on (a) velocity and (b) temperature profiles in the presence of wall heating (

The variation of the velocity profile (F) and temperature profile (G) with the effect of magnetic field are plotted in Fig.4. These profiles satisfy the far field boundary conditions asymptotically, which support the obtained numerical results. In fact, the laminar boundary layer is thicker for the second solution in comparison with that of the first solution in both of these velocity and thermal profiles. It is remarked that the upper branch solutions (first solution) are stable and physically realistic, while the lower branch solutions (second solution) are not. Although such (second) solutions are not physically plausible, they are nevertheless of mathematical curiosity [14]. 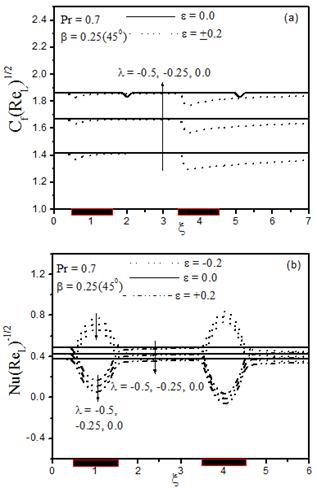 Fig. 5. The effect of unsteadiness and wall heating (

= -0.2) on (a) skin friction coefficient and (b) heat transfer coefficient.

The variation of the skin friction [

] coefficients with the unsteady parameter

(decelerating flow) together with their velocity and temperature profiles are shown in Fig. 5 and 6 for

respectively. It is clear from Fig.4 that, as

decreases [Fig.5 (b)] whenever there is localized wall heating/cooling or not. It is evident from these figures that velocity increases [Fig. 6(a)] and temperature decreases [Fig. 6(b)] at any point of the region inside laminar boundary layer, with the increase of the unsteady decelerating parameter 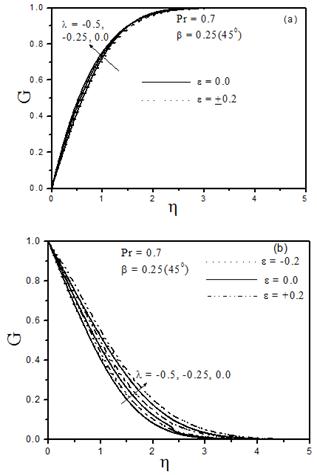 Fig. 6. The effect of unsteady parameter and wall heating (

In this paper, the problem of unsteady MHD forced convection decelerating flow over a wedge by considering the effect of localized wall heating /cooling has been studied. Semi-similar equations are obtained and solved by using the finite difference method along with quasilinearization technique. The analysis reveals that dual solutions are obtained for the decelerating flow in the presence of localized wall heating/cooling. Further it is found that the application of magnetic field stabilizes the laminar boundary layer flow and consequently delays the boundary layer separation.

The authors are thankful to PETRF and the Department of Mathematics, P.E.S. College of Engineering, Mandya - 571 401, for providing fabulous facilities for research work.