Unsteady MHD Decelerating Flow over a Wedge with Heat Generation/Absorption

2Department of Mathematics, GSSS Institute of Engineering and Technology for Women, Mysore, India

This paper deals with the study of unsteady, MHD laminar boundary layer forced flow of an incompressible electrically conducting fluid over a wedge in the presence of heat generation/absorption. Similarity transformation is used to convert the governing nonlinear boundary-layer equations to non-linear ordinary differential equations and later, these equations are solved numerically using Keller-box method to obtain self-similar solutions. The results are obtained for local skin friction coefficient and Nusselt number for different governing flow parameters. It is found that dual solutions exist up to a critical value of the unsteady parameter beyond which, the boundary layer separates from the surface. Further, it is established that application of the magnetic field delays the boundary layer separation.

In their innovative work of 1931, Falkner and Skan [1] have explored two-dimensional incompressible flow past a wedge. Since then it has been studied by many researchers [2-14] employing various methods suitable for flow and heat transfer phenomena.

The hydro-magnetic boundary-layer flow and heat transfer in a incompressible electrically conducting fluid over a wedge is a significant type of flow having wide applications in industries and engineering. This type of flow has attracted the interest of many researchers due to its applications in MHD generators, plasma studies, nuclear reactors, geothermal energy extractions. Indeed, Vajravelu and Nayfeh [15] examined the hydromagnetic convection at a cone and a wedge. Kafoussias and Nanousis [16] have considered the magneto hydrodynamic Falkner-Skan flow with suction or injection. K.A.Yih [17] studied MHD forced convection flow adjacent to a nonisothermal wedge while, Seddeek. et al. [18] presented similarity solutions for a steady MHD Falkner-Skan flow and heat transfer over a wedge.

Of late, Ashwini and Eswara [19] have presented the effect of internal heat generation or absorption on the Falkner-Skan boundary layer flow with an applied magnetic field.

In all the above studies the effect of unsteadiness were not studied. Hence, the present study is aimed at analyzing the unsteady, MHD decelerating self-similar Falkner-Skan flow with internal heat generation or absorption where unsteadiness in the flow is due to the time-dependent free stream velocity. The governing non-linear partial differential equations are reduced to a system of non-linear ordinary differential equations by applying similarity transformations.  Later, they are solved numerically using an implicit finite difference scheme viz., Keller-box method, to obtain self-similar solutions. Similarity solutions are very useful in the sense that they reduce the independent variables of the problem.

It is remarked here that the counter part of the present paper pertaining to accelerating flow has been studied recently by Ashwini and Eswara [20].

is measured along the surface of the wedge and

is normal to it. The unsteadiness in the flow field is introduced by the free stream velocity

, varying inversely with time. The temperature

is applied in the direction normal to the wedge surface and, it is assumed that the magnetic Reynolds number is small, so that the induced magnetic field can be neglected. No electric field is assumed to exist and Hall effect is negligible. The fluid properties are assumed to be constant and the viscous dissipation has been neglected in the energy equation. Under the above assumptions, the boundary layer equations governing the unsteady, MHD forced convection flow past a wedge is given by:

The boundary conditions are given by

is the parameter characterizing unsteadiness in the free stream and

is the non dimensional time variable (Eswara and Nath [21]; Schlichting [22]). This similarity property permits a decrease in the number of independent variables from three to one and yields treatment using ordinary differential equations instead of partial differential equations, to obtain self similar solutions for the nonzero values of

. In fact, the flow is accelerating if

and the flow is decelerating if

, the problem reduces to the steady case. 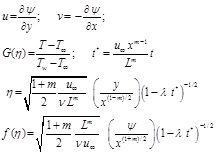 is connected with the apex angle

The transformed boundary conditions are

The heat generation or absorption parameter

appearing in Eqn. (7) is the non-dimensional parameter based on the amount of heat generated or absorbed per unit volume given by

being constant coefficient that may take either positive or negative values. The source term represents the heat generation that is distributed everywhere when

) and the heat absorption when

is zero, in case no heat generation or absorption.

It is worth mentioning here that when

Which have been considered by Ashwini and Eswara [19] representing the steady counter part of the current problem. Further, Eqns. (10) and (11) reduce to those of Watanabe [6], when

and heat transfer coefficient in the form of Nusselt number

; and they are defined, respectively, as

are shear stress and heat flux along the surface of the wedge, where

are dynamic viscosity and thermal conductivity, respectively. Using Eqns. (5) and (8) in (12) the skin friction and Nusselt number can be written as 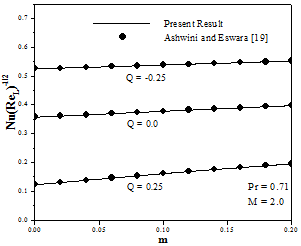 with those of Ashwini and Eswara [19].

An accurate and very efficient implicit finite difference scheme called Keller-box method [23] is used to solve the coupled ordinary differential equations (6) and (7) along with boundary conditions (9). To assess the accuracy of the method which we have used, the  skin friction

with a magnetic field (

) are compared with those of Ashwini and Eswara [19] [See Fig.2]. There is an excellent agreement between the present results and the above mentioned studies.

) results for the range of

with those of Watanabe [6]. 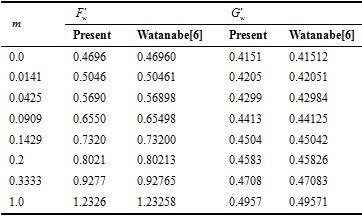 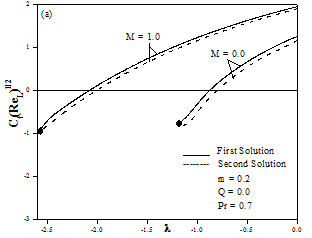 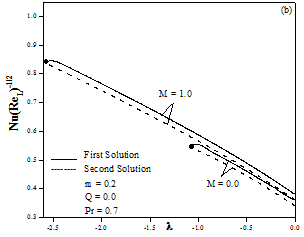 Fig. 3. Effect of magnetic field (M) on (a) skin friction and (b) heat transfer coefficients.

The effect of magnetic field

(no heat generation/absorption and thermal radiation) for

(decelerating flow) are illustrated in Fig.3. It is observed that as magnetic field increases both

increases quantitatively. The percentage of increase in

is about 95.65% and percentage of increase in

. It is interesting to view the existence of  dual solutions for both

, in the range of

is a critical value of

Therefore, solution exist up to a critical value

[Fig.3(b)] in the absence of the magnetic field

and, in fact, they are

. This vindicates the significant role played by the transverse magnetic field in the stabilization process of the laminar boundary layer flow during this short span of time.

Figure 4 shows the consequential velocity and temperature profiles of the corresponding first and second solutions, when

. It is clearly seen that both momentum and thermal boundary layer thicknesses are found to decrease with the increase of the magnetic field. Further, these profiles satisfy the far field boundary conditions asymptotically, which support the obtained numerical results. It is remarked that the upper branch solutions (first solution) are stable and physically realizable, while the lower branch solutions (second solution) are not. Although such solutions are deprived of physical significance, they are nevertheless of mathematical interest [22]. 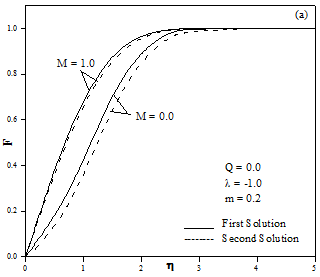 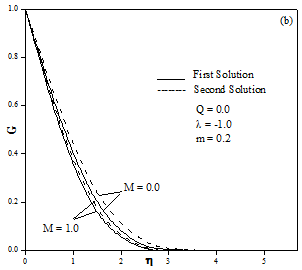 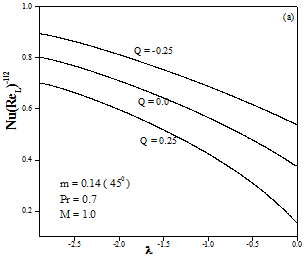 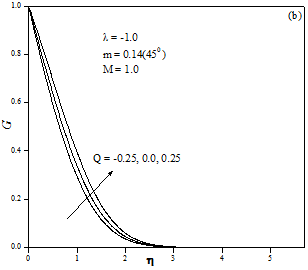 on (a) heat transfer coefficient and (b) temperature profile.

Figure 5 displays the effects of heat generation or absorption parameter (

(decelerating flow) at the wedge angle

. It is observed that

). The percentage of decrease in

, whereas opposite trend is observed for the heat generation

. This is due to the fact that heat generation

increases the thermal state of the fluid leading to enhancement of the heat transfer rate.

The effect of magnetic field and heat generation/absorption on the behavior of unsteady decelerating flow of an electrically conducting fluid flow past a wedge has been numerically investigated. Dual solutions are found to exist in forced convection decelerating flow regime. The magnetic field stabilizes the flow which in turn delays the boundary layer separation from the wedge surface. Heat generation increases thermal boundary layer thickness due to decrease in heat transfer coefficient and opposite trend is observed during heat absorption.

The authors are thankful to the reviewer for their comments and suggestions. Further, the authors express their gratitude to PETRF and the Department of Mathematics, P.E.S. College of Engineering, Mandya-571 401, for providing finest facilities for research work.