Under the background of energy consumption and serious environmental pollution, the underground deep heat reservoir with its advantages of clean and pollution-free renewable water, has quickly become the new energy source that every country promotes actively. Groundwater, as low heat source, solves the problem of refrigeration in summer and heating in winter by constructing production and injection wells system (PWIS) to extract the amount of heat or cold in groundwater.

The main problem during developing and utilizing the geothermic is that geothermal reservoirs temperature and pressure decreased when production and time increased (Chen 1998). At the same time the discharge of geothermal water caused thermal pollution to the environment (Shen and Zhang 1998). Now, we think that injection can effectively solve the problems which geothermal exploitation and utilization creative. So the injection and exploitation of geothermal are popularized and applicated in the global scope. The number of wells are rapidly increasing because wells can exploited geothermal energy. Recently, the research about heat reservoir and injection was also started all over the world (Tenma et al. 2003).

In the related research, the ground aquifer was treated as energy storage layer to study the changes of the internal temperature field. The law of groundwater heat conduction and the mechanism analysis of underground aquifer’s heat exchange had many achievements (Ma et al. 2005; Ni and Ma 2006; Zhu et al. 2011). Paksoy et al. (2004) put the pumping well’s water level falling and injection well’s water level rising as constraint conditions. Thought modeling they analyzed production and injection well’s minimum separation in the context that "heat transfixion" did not occur. Tenmaa conducted the software FEHM to establish the ideal model of wells(Ni and Ma 2006). They carried on comparison and analysis by simulating the location’s layout plan, operation time, injection amount, mining method, pipe length and some other working conditions. Zhang et al. (1999) did some research about groundwater temperature change trend under the condition of the same well. The main influencing factors included cold and hot load, aquifer parameters’ choosing, thermal diffusion coefficient, etc. On the basis of HST3D which USGS developed to simulate heat transferring and solute transportation, Zhang et al. (1999) also set up a numerical model of deep well injection in underground water source heat pump system. They conducted numerical simulations on the changes in temperature field and underground water level for a long time and verified model’s functional and adaptability.

There already were some reports on the work about separate heat conduction, heat transfixion, enforce convection and so on. But there was little literature about transfixion problems around energy storage well and the relationship between flow transfixion and heat transfixion until today when the occurrence of flow transfixion was determined by temperature field’s distribution in energy storage layer and the occurrence of heat transfixion. To know the distribution of low field and temperature field in energy storage layer clearly, to set pumping well spacing reasonably, to improve the efficiency of underground thermal storage , and to prevent the occurrence of thermal transfixion, it’s necessary to do some research about the changes of fluid field and temperature field in an aquifer on different injection parameters to predict the distribution state of underground "cold and hot reservoir" and finally provide reliable basis for engineering design of an aquifer. Based on the groundwater flow model and heat transport model to analyze the mechanism of groundwater appearing flow transfixion and the influence it brings to thermal transfixion, this paper puts the water heat pump engineering in a residential area of Xianyang city, Shaanxi province for an example, then we can get the approach of making reasonable distance between production and injection wells and provide scientific foundation for the reasonable design of the PIWS.

Research has been conducted on thermal-hydrological coupling model of aquifer energy migrated (Zhao et al. 2009; Zhang et al. 2006; Yuan et al. 2009). The level structure, heterogeneity and anisotropy are used to confine the aquifer commonly in the three-dimensional unsteady flow system. In this kind of premise, deformation of the geological structure was mainly in the vertical direction and kept approximate constant in the horizontal direction. At the same time, aquifer porosity was variable while assuming that the density of water was constant. 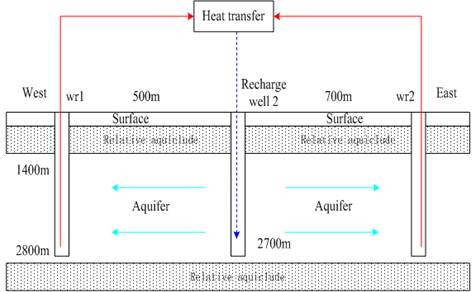 Figure 1 is the conceptual model diagram of pumping model (wr1’s not recharged). For production and injection wells, we can use this mode during the seasonal alternation.

For heterogeneous and anisotropic confined aquifer, while production and injection wells running, the fundamental equations, which describe porous medium three dimensional non steady flows and the heat transport, are as following:

2.2. The Study Area and Boundary Conditions

The study area Located in the central part of Shaanxi province, China, Xianyang city is about 30 kilometers (19 miles) northwest of Xi’an with the Weihe River immediately to the south(Xi et al. 2014; Li et al. 2013). We analyzed PIWS with this model, and simulated calculations on its groundwater flow field by Modflow software in study areas. We got its essential information and then got heat affected zone by simulation analysis, and finally got hydrothermal coupling relationship in this area which provided reasonable gist for engineering practice there.

The target area was a square area of 2000 m × 2000 m. There were 5 wells in the middle (Figure 2). The simulation area was located in River’s first level region, so it was unconsolidated aquifer formed by deposition. It belonged to the same level pumping and the distance was small. According to the supplying structure of pumping and observation wells, we knew that each well had similar lithology and its adjacent rock’s lithology variation was small. So the rocks in the study area could be summarized as horizontal extension. Pumping well mesh only occurred in the shallow confined aquifer under 1400 m. It mainly simulated the hydraulic distribution of a confined aquifer. So the rocks above 1400 m could be summarized as aquitard. Between 1400 m to 2800 m, lithology mostly was coarse sand and coarse sand, which were aquifer. There were clay and silt below 2800 m and it could be seen as aquitard.

Fig. 2. The location of study area.

Above all, there were three layers in vertical direction. The total depth was 3000 m. From top-down: 0 to 1400 m below ground was aquitard, mainly was Sanmen group and Zhangjiapo group; 1400 to 2700 m was first shallow confined aquifer, mainly was Lantianba group; 2700 to 3000 m was aquitard, mainly was Jianxintong; Under 3000 m was aquifuge. This research was divided into two experiments: one was pumping and injection test, the other was injection temperature measurement test. Pumping rate was 1883 m3/d. Temperature was 55°C. Running time was 120 d in one year. Reinjection water temperature was 36°C. Reinjection time was 120d. Recharge volume was 2890 m3/d.

In analog computation, we selected the simulation parameters in the region combined with its geology of aquifer and hydrogeological condition. We set aquifer as heterogeneity and anisotropy. The ranges of values for each parameter used in this study are reported in Table 1, in which the main parameters, H, K, Sy, Ss, Kd, D, n, and

, comes from the report of well completion. Further data, such as R,ET, and Hk, on these simulations are available in the supporting information data set. 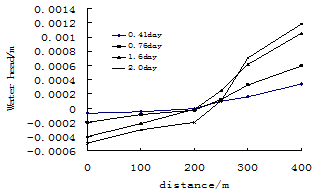 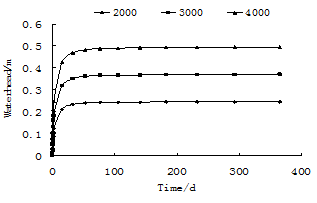 Fig.5 shows the change curve of the water head and time of injection and pumping wells with different distance between observation and recharge wells. It was 300 m far from injection wells. When extraction volume was 2000m3/d，the time when underground water formed new steady fluid field was about 600 h. But when it came to 5000m3/d，the time decreased to about 400h, which could explain that the time of flow transfixion decreased with extraction volume increasing. When PIWS had run over the water in a cycle, the groundwater’s water level amplitude, constant time and the alteration of the temperature field in different distance could be simulated. So the distance of pumping and injection wells could be confirmed.

3.2. Analysis of the Influence That Flow Transfixion’s Production on Temperature Field 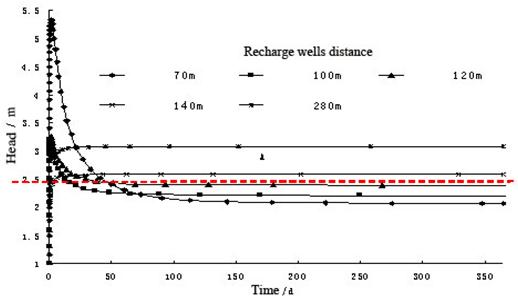 Fig. 6. The change curve of head and time of injection and pumping wells with different distance between observations well and recharge well. 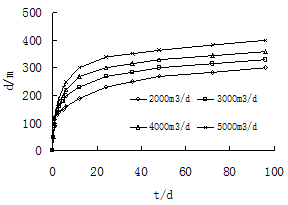 Fig. 7. The change curve of influence of temperature field and time with different quantity of water. 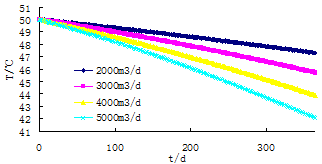 Fig. 8. The change curve of temperature and time of observations well with different quantity of water.

To draw the influence scope of temperature in aquifer better, we assume that the area that the temperature of aquifer decreased at least 2°C was the area that was influenced by recharge, namely heat transfixion. The Fig. 9 shows the change curve of temperature and time with different distance between observation and recharge wells. The larger the distance is, the longer the time to occur heat transfixion is. And the range ability of pumping temperature would be smaller. When it came to the 5th year, the reasonable distance lower limit was 100 m in the premise that heat transfixion would not happen. Combined with the influence scope above, we could know the reasonable distance was 100m-140m in this study limited conditions. 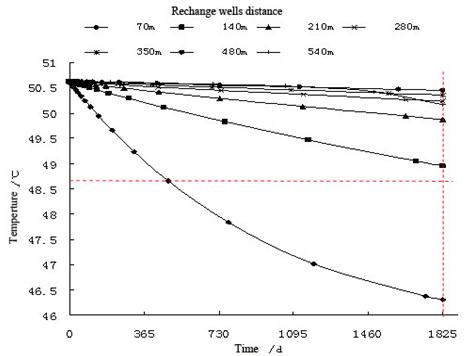 Fig. 9. The change curve of temperature and time with different distance between observations well and recharge well.

With combining the water flow numerical model of the ground aquifer and the numerical model of energy storage, this paper simulates the fluid field flow and temperature field in underground water to judge the flow transfixion with the changes of the hydraulic gradient. The conclusions are as follows:

(1)  The coupling thermal-hydrological model was used to simulate the worksite in Xianyang City, Shaanxi province. The results show that it can be used to accurately and truly simulate the distribution of the groundwater flow and temperature fields in the actual situation.

(3)  With the constant distance between the pumping and injection wells, when the heat pumps works for a long time there will occur flow transfixion in the groundwater flow field. The larger the quantity is, the shorter the time of flow transfixion is.

(4)  When the system is running 5y, the most reasonable distance is 100 m to 140 m in the premise that heat transfixion would not happen.

The authors would like to acknowledge graduate students: Zhihan Yun, Lei Zhen, Dan Xu and huiJv Zheng from school of Environmental Science & Engineering in helping collecting the site data, Kara Cosentino from the University of Nebraska-Lincoln for helping correcting the English express. The authors also wish to express thanks to the Open Research Fund of State Key Laboratory of Simulation and Regulation of Water Cycle in River Basin (China Institute of Water Resources and Hydropower Research), Grant NO:IWHR-SKL-201510.