Discussion of the NASA OCO-2 Satellite Measurements of CO2 Concentrations

Recent papers and press releases have shown details of the latest results of the NASA OCO-2 experiment. Aim of this project is the tracking of the CO2 concentration in the atmosphere, to understand the authentic geographical distribution of sources and sinks and the real diffusion and transport. The major downfall of the commented works is the lack of background information and discussion of the prior state-of-the-art and accuracy and reliability of the latest information. The NASA OCO-2 experimental satellite monitoring product is compared with prior similar experimental satellite monitoring products as the NASA AIRS or the JAXA GOSAT result.  Similarly, the discrepancies vs. computational products as the NASA GEOS-5 predicted CO2 concentrations are discussed. The major result that emerges from the latest monitoring is that our knowledge still need to progress considerably for a proper understanding of the carbon balance.

Frankenberg, Pollock, Lee et al. (2015), Geddes and Boesch (2015), Liu, Bowman and Henze (2015) and  Merrelli, Bennartz, O'Dell et al. (2015), have proposed details of the latest monitoring system by NASA, OCO-2, aimed to deliver the ultimate measure of the sources and sinks of CO2 as well as the transport and diffusion of CO2 on a global basis.

Despite everything related to the carbon cycle is considered a settled science since decades, what we do not know is possibly still exceedingly relevant vs. what we do know.

The detailed maps of OCO-2 global CO2 concentration have been preannounced in a press release NASA (2014a), where models were used to forecast the imminent OCO-2 experimental results, and have also been proposed in the press release NASA (2014b), that so far is the only information of practical interest in the contest of the climate change debate that has filtered out from the NASA project.

The major downfall of the NASA OCO-2 works is the lack of background information and discussion, as this experimental satellite monitoring product should have been compared with prior similar experimental satellite monitoring products, as the NASA AIRS (NASA, 2009) or the JAXA GOSAT result (JAXA, 2012). Similarly, the discrepancies vs. computational products as the NOAA ESRL Carbon Tracker (NOAA ESRL, 2015) or the NASA GEOS-5 (NASA, 2014a) predicted CO2 concentrations are downplayed. The accuracy and reliability of the latest result is not sufficiently discussed, as the concepts of validation and accuracy are mostly missed in climate monitoring products.

A prior NASA experiment (NASA, 2009) returned some CO2 concentration data. The Atmospheric Infrared Sounder (AIRS) on AQUA provided 7-year global observations of atmospheric CO2 concentrations. The AIRS global CO2 concentrations, July 2009 are proposed in Figure 1. According to NASA (2009) this "first-ever release of a global carbon dioxide data set that is based solely on observations" was helpful to "corroborate climate model predictions suggesting water vapor will greatly exacerbate – in fact, double – climate warming expected as carbon dioxide levels rise". However, apart from the press release, no significant assessment of sources and sinks or transport and diffusion of CO2 was then performed by using AIRS information.

To be noted in the image the higher concentrations along the west and east coast of the United States, east of Japan, and in an area about same latitude from Italy to Northern China, plus the two other spots in the  southern hemisphere above Argentina and in South Africa, a pattern that will conflict with other subsequent information.

The AIRS project was not that helpful, as we haven’t heard any more of further maps. The latest reports on the OCO-2 monitoring project certainly do not mention the AIRS result for an useful comparison exercise discussing the differences.

A much more relevant and significative work was certainly the JAXA GOSAT project (JAXA, 2012). The global results, however still quite fragmentary, were commented in Parker and Ollier (2015).

The net flux distribution shows that the top net emitting continent is Asia, followed by Africa and Europe.  North America is also emitting significantly, while South America is net sequestrating. Antarctica has a net flux close to zero. Australia (Oceania) is finally the top sequestering continent.

Figures 1 and 2 differ considerably each others, even considering these images are referred to different time windows. However, bot results are showing the inconvenient truth that the CO2 net production, the difference between emission and sequestration, but also transport and diffusion, are very far from what is expected by models.

The major conclusion from the project result (Parker and Ollier, 2015) was that we do still have a lot to learn, both in developing monitoring products, and in the knowledge of the relevant physical phenomena to model.

The latest reports on the OCO-2 monitoring also do not mention the GOSAT result discussing the differences in between the two approaches and the two results. 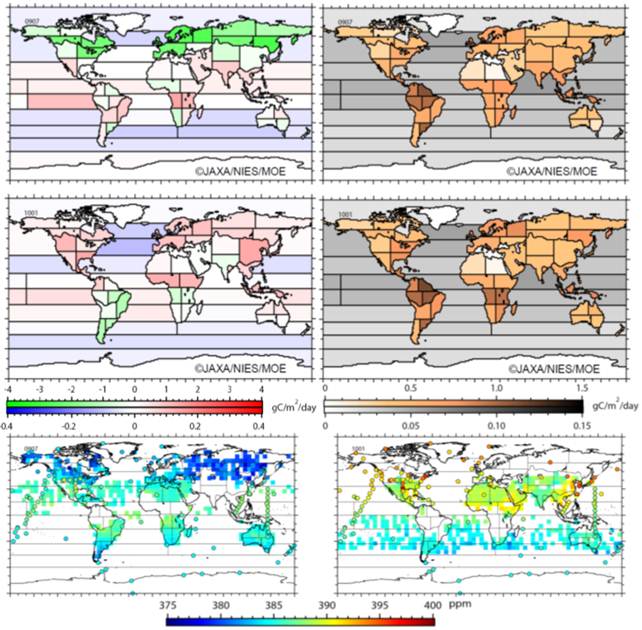 Every novel product should be always compared with the prior state of the art to understand if there is a step forward, and this does not seem the case here.

Similarly, a proper calibration and validation work does not seem to be considered a relevant step of the development of this product, possibly because the ground measurements we do have are not that widespread or trustworthy.

As pointed out by Reid (2015a, b) over land, the CO2 concentrations seem dominated by vegetation type, with higher concentrations over South America, Southern Africa and Indonesia.

Over sea, there are unexpected but significant concentrations in the South Atlantic and near Madagascar, but also east of Japan, north of New Zealand or near the southern tip of Greenland and not all of them can be easily explained.

Figure 3 proposes little evidence that the anthropogenic CO2 emission from industrial activities is the driving force of the CO2 concentration distribution.

The claim by NASA (2014b) that the "carbon dioxide concentrations are highest above northern Australia, southern Africa and eastern Brazil" is a misrepresentation of their evidence that the CO2 concentration is higher in Indonesia. This is possibly the result of events occurring there, as the local burning of forests, and certainly not to be attributed to Australia. More grounded is the remaining part of the claim by NASA (2014b) stating "elevated carbon dioxide can also be seen above industrialized Northern Hemisphere regions in China, Europe and North America" that is certainly not contrasting with logic.

The scarcely populated, rich of natural sinks, everything but industrial intensive, Australia, that is the world top pro capita net CO2 sequestering country from common sense and from the GOSAT exercise, is wrongly associated by NASA to the world highest concentrations of CO2. This fact cast some doubt about the further development of the project, as political corretness has been so far the major hurdle to the development of good monitoring projects (see the global sea levels monitored by satellite altimetry or by the satellite gravimeter experiment GRACE, with the raw results arbitrarily corrected by introducing a modelled global Glacial Isostatic Adjustment GIA to return consistency with climate models, Parker (2014), Mörner (2015)). Will be the NASA OCO-2 project permitted to return politically incorrect statements? We will certainly learn in the next year.

Prior to launching the satellite NASA developed the GEOS-5 numerical model to predict where concentrations of CO2 were likely to occur and to help interpret the satellite data. The comparison of Reid (2015b) shows that the real world has some other relevant phenomena to consider which are not accounted for by the model.

What we expect based on current knowledge of CO2 production/sequestration and diffusion and transport is therefore still not enough, and in particular the CO2 production associated with subtropical vegetation appears to be greatly underestimated by models as GEOS-5.

The experimental CO2 distribution is very different from the distribution by models but it also strongly variable between different experimental approaches. The methods developed show indeed strongly variable results in between the results of completely computational tools as the Carbon Tracker or GEOS-5 and in principle experimental tools as AIRS, GOSAT and OCO-2. What we do not know about the carbon cycle is possibly still larger than what we do know, even if the science of global warming is settled.

Despite everything related to the carbon cycle is considered a settled science since decades, what we do not know appears to be exceedingly relevant vs. what we do know. Different experimental and computational tools are still providing very different results. We look forward for more and more truly measured CO2 data not corrected for compliance with models.