Drinking water suppliers such as natural sources are limited. So, using wastewater treatment techniques and also sea water desalination methods have been explored for many years. This experimental work considers ZnO nano plate in solar pond providing drinking water using solar power as a renewable energy instead of fossil fuel as a nonrenewable energy. Industrial wastewater from petrochemical plant is treated using solar pond technique. Evaporation rate, ambient temperature, brackish water temperature and produced water are reported in a year. According to the experiments, the highest rate of evaporation is on July, 5.2 (lit/m2. day), the highest value of ambient temperature is 34 C on July and the highest amount of insolation rate 24500 (kj/m2.day), is obtained on June and August. Results show an evaluation of solar pond technique in wastewater treatment.

There is not a definite answer to the water shortage problem, generally [1 and 2]. Researchers have been investigated about ways to keep and extension of natural sources such as rivers and lakes by global rules and such environemental regulations [3 and 4]. However, keeping natural sources needs such a harmony between many factors depending natural phenomena which are disturbed by human beings activities [5]. By the way, growing industries and population explosion can not be stopped [6 and 7]. So, global warming, environmental emissions and disapearing water natural resources will be continued and regulations just can delay the finish point [8 and 9].

One of the solution which has been proposed for man than a century is wastewater treatment [10]. Finding technical ways to provide water specially drinking water from industrial wastewater and sea water has been focused in many countries [11]. Many techniques of treatment are based on fuels which reveal pollutants in turn, so the final result is opposite [12]. Although these techniques are such a temporary solutions but totally disturb the environment and affects the natural water sources, negatively [13].

Commonly, evaporation mechanism is used in classical techniques of treatment such as multi stage flash, MSF and multi effect distillation, MED [14]. Non renewable fossil fuels and also non terminated solar energy as a renewable energy are suppliers of the evaporators [15].

Economic evaluation, environmental emissions and quality of produced water must be considered in applying these suppliers [16]. So, many countries which has sunny days prefers using solar evaporators, such as solar ponds.

Treatment methods which lead to minimum pollutants and high quality water according to the economical calculations are considered, recently. These methods are called as zero discharge desalination methods. These methods can be introduced for industries which drain waste into the environment [15]. Desalination process separates salt from the wastewater which is applied as one of the final steps in wastewater treatment process to produce drinking water. So, pollutants which are discharged from the ZDD process are negligible and safe and clean materials are produced which are drinking water and salt.

Zero discharge desalination methods are introduced in different configurations. One of these used solar ponds as one of the final steps. Simple solar ponds are feasible and promising tools to produce clean high quality water which can be used in pharmaceutical applications [15].

Solar energy adsorption is the key factor in performance of solar ponds. So, some various methods have been introduced to increase the amount of adsorption, evaporation rate and amount of final product as drinking water [16]. Inclination angle of glass roofs, direction of roofs toward the solar insolation and geographical position of the pond, geometries of the pond and glass are some of investigated parameters which have been considered in using effective glass solar ponds.

This experimental work, consider usage of nano plate as a bottom of the solar pond to increase the performance yield of it [15].

The authors are tried to evaluate the thermal performance of sola pond with nano plate as bottom layer to produce the potable water and concentrated brackish water.

The proposed solar pond is one of the basic stages in zero discharge desalination.

2.1. Description of a Solar Pond

A solar pond is a pool of saltwater which acts as a large-scale solar thermal energy collector with integral heat storage for supplying thermal energy. A solar pond can be used for various applications, such as process heating, desalination, refrigeration, drying and solar power generation [7]. The saltwater naturally forms a vertical salinity gradient also known as a "halocline", in which low-salinity water floats on top of high-salinity water. The layers of salt solutions increase in concentration (and therefore density) with depth [8]. Below a certain depth, the solution has a uniformly high salt concentration. According to the researches, there are 3 distinct layers of water in the pond: a). the top layer, which has a low salt content, b). an intermediate insulating layer with a salt gradient, which establishes a density gradient that prevents heat exchange by natural convection and c). The bottom layer, which has a high salt content. If the water is relatively translucent, and the pond's bottom has high optical absorption, then nearly all of the incident solar radiation (sunlight) will go into heating the bottom layer. The heat trapped in the salty bottom layer can be used for many different purposes, such as the heating of buildings or industrial hot water or to drive an organic Rankine cycleturbine or Stirling engine for generating electricity [9].

The nano plate is situated under the proposed solar pond as floor. The used material for making this plate is zinc oxide nano particles.

Zinc oxide nano particle is a common ingredient and has a huge variety of applications. Zinc is an essential mineral and is non-toxic in low concentration. Figure 1-a shows TEM photos of nano particles in the scale of 500

. The nano plate which is situated as floor of solar pond is made of zinc oxide nano particles. 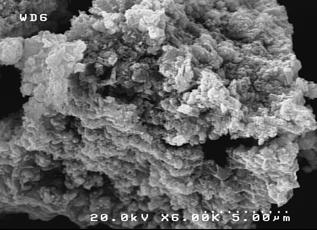 This solar pond operates on the same principle as rainwater: evaporation rate and condensation. The water from the oceans evaporates, only to cool, condense, and return to earth as rain. When the water evaporates, it removes only pure water and leaves all contaminants behind.

Figure 1-b shows the average temperature of three zones of wastewater in studied solar pond in 30 June 2013.

Figure 1. b). The average temperature of wasterwater in solar pond in 30June 2013.

Figure 2. Evaluation of evaporation rate and ambient temperature during 2013.

Temperature values of lower layer of brackish water are obtained near 80°C. This may be described by applied conditions; color of surface is black, the floor which is made nano particles of zinc oxide, the space between the table and base of solar desalination pond is insulated with sawdust. Also, Figure 1-b shows the average temperature of upper layer is 42.5°C, approximately. 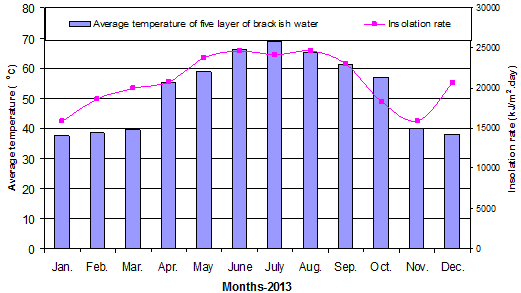 Figure 3. The variation of average temperature and insolation rate versus different months of 2013.

Figure 4. Evaluation of average ambient temperature and insolation rate versus different months of 2013.

Experimental work is done to investigate the effect of using nano plate in the solar pond on the rate of drinking water. Solar pond as one step in zero discharge desalination process is considered to produce salt and water from waste brine, in this study.

The highest rate of evaporation is on July, 5.2 (lit/m2.day), the highest value of ambient temperature is 34 C on July and the highest amount of insolation rate 24500 (kj/m2.day), is obtained on June and August.

According to the results, the highest amount of evaporation rate is dependent on combination of factors such as amount of insolation rate, ambient temperature and wind velocity.