Human beings have always been exposed to ionizing radiation from the earth. The natural radioactivity in rock comes from 232Th and 238U series and 40K. Quarry activities which involves blasting, crushing and processing of rocks into different aggregates releases radionuclide in the form dust particles into the atmosphere and the radiological implication of these radionuclides is due to gamma exposure of the body and irradiation of the lung from inhalation and ingestion of radon and its daughters [1]. Therefore, the assessment of gamma radiation dose from natural sources is of particular importance as natural radiation is the largest contributor to the external dose of the world population [1]. Evaluation of external gamma dose due to the natural sources is essential as these doses vary depending upon the concentrations of natural radionuclides, 238U, 232Thwith their daughters, and 40K, present in the rocks and soils which further depends upon the local geology of each region in the world [2] [3].

Federal Capital Territory (FCT), Abuja is located between latitude 8o34’N, and 9o14’and longitudes 7o10’E and 7o34’E and has a land area of 713 km2. The city is also witnessing aggressive construction works to provide houses for this influx of people. Some papers have been published on the radioactivity level in some regions of Nigeria like [4], [8] and none is available for radionuclides level in rock samples in this city from the survey of literature and authors’ knowledge. The aim of this work is to determine the radiological risk associated with Naturally Occurring Radioactive Materials (NORM) at quarry sites of Abuja, Nigeria.

The Federal Capital Territory (FCT), Abuja is considered for this study because of the massive quarry activities taking place due to infrastructural development such as mass housing and road constructions. The eight quarries selected are Arab Contractors of Nigeria (ACN), Dantata & Sawoe (D&S), Venus Mining (VQ), Dai Jin Jia (DJJ), Zeberced Quarry Nigeria (ZB), Titong Quarry (TG), Cappa Granite Company (CGC), and Perfect Stones Quarry (PS)  and are situated at Mpape, Ushafa, Dutse-Alhaji, Durumi village, Kubwa, Pyankasa, Gosa and Kuje districts. The Area Councils (AC) that fall within the study area include Abuja Municipal Area Council (AMAC), Bwari Area Council (Bwari) and Kuje Area Councils (Kuje). The quarries considered for this study are spread within these Area councils. The locations of the samples and geological structure of the study area are shown in Figure 1 below. 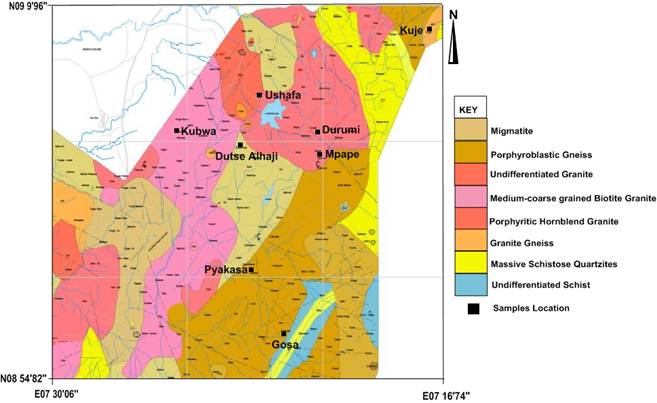 Figure 1. Digitized Map showing the location of the study areas.

2.1. The Geology of the Study Area

The underlying rocks of the FCT consist basically of Basement Complex and sedimentary rocks. The Basement Complex rocks made up of igneous and metamorphic rocks cover about 48 % of the total area and in some places the land is occupied by hills and dissected terrain [9]. The rocks consist mainly of schists, gneiss and older granite. The mountain ranges together with some isolated inselbergs are believed to have been poured out of volcanoes within the Tertiary period. The areas underlain by the sedimentary rocks cover about 52 % of the total area of the Federal Capital Territory and largely constitute the undulating plains. These plains form present day remnants of erosional processes of the Quaternary period. Towards the south west of the Federal Capital Territory there exist sand ridges with outliers of sandstone capings. Sandstone and clay also occur in significant proportions of parts of Abaji and Kwali Area Councils. These areas are easily dissected and indeed exhibit very glaring evidences of severe gully erosion [10].[11][12] also described the geology of the Federal Capital Territory as almost predominantly underlain by high grade metamorphic and igneous rocks of Precambrian age. These rocks consist of gneiss, migmatites and granites and schist belt outcrops along the eastern margin of the area. The belt broadens southwards and attains a maximum development to the south-eastern sector of the area where the topography is rugged and the relief is high. In general, the rocks in the FCT are highly sheared as shown in Figure 2 below. 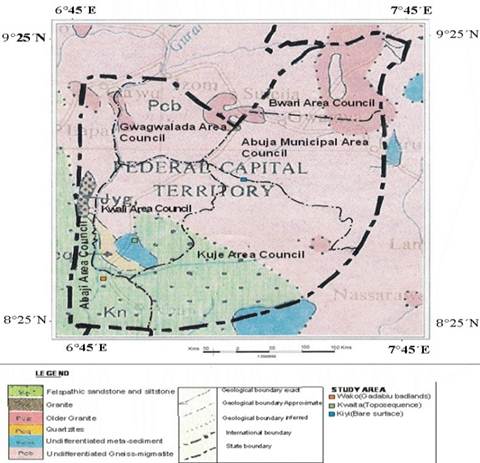 A total of forty (40) granite rocks samples were collected from eight quarry sites spread across (Amac, Bwari and Kuje) the Area Councils of Federal Capital Territory, FCT, Nigeria. The collected samples were labelled at the point of collection and were put in the polythene bag and then transported to the laboratory for further processing.

The collected samples were air dried at room temperature in the laboratory. The rocklab ring mill at the Centre for Energy Research and Development (CERD), Ile Ife, Osun, Nigeria, was used to crushed and pulverize the samples after which all were sieved through 2mm mesh sizes. The samples were filled into Polyvinylchloride containers (PVC) which were then hermetically sealed with the aid of PVC tape to prevent the escape of airborne 222Rn and 220Rn from the samples. All the samples were weighed and stored for at least 28days prior to measurement in order to attain radioactive secular equilibrium between 226Ra and 228Ac and their short lived progeny. After the secular equilibrium was attained, each samples were then analysed for 10hours (36,000s) using the gamma ray spectroscopy, NaI (Tl) facilities at Centre for Energy Research and Development (CERD), Obafemi Awolowo University (O.A.U), Osun, Nigeria.

In order to assess any radiological hazard, the exposure to radiation arising from radionuclides present in rock can be determined in terms of many parameters. A direct connection between radioactivity concentrations of natural radionuclides and their exposure is known as the absorbed dose rate in the air at 1 metre above the ground surface. The mean activity concentrations of 238U, 232Th and 40K (Bq.kg-1) in the granite samples are used to calculate the absorbed dose rate given by the following formula [13].

The absorbed dose rate in air at 1 metre above the ground surface does not directly provide the radiological risk to which an individual is exposed [14]. Using an outdoor occupancy factor of 0.2 and the conversion factor of 0.7 SvGy-1 [1], the annual effective dose equivalent (AEDE) from the calculated outdoor terrestrial gamma radiation at 1 m above the ground in Abuja FCT  in unit of mSvy-1 was obtained by using the following formula [15][16].

The distribution of 238U, 232Th and 40K in granite is not uniform. Uniformity with respect to the exposure to radiation has been defined in terms of Raeq in Bq.kg-1 to compare the specific  activity of materials containing different amounts of 238U, 232Th and 40K. It is calculated through the following relation [17].

Where CU, CTh and CK are the activity concentration of 238U, 232Th and 40K in Bq.kg-1 respectively. The permissible maximum value of the radium equivalent activity is 370 Bq.kg-1 [13] which corresponds to an effective dose of 1 mSv for the general public.

The internal hazard index (Hint) gives the internal exposure to carcinogenic radon and the value of this index should be less than unity in order for the radiation hazard to have negligible hazardous effects to the respiratory organs of the individuals living in the dwellings [17].

Where CU, CTh, and CK are activity concentration of 238U, 232Th and 40K respectively in Bq.kg-1. The value of this index should be less than unity in order for the radiation hazard to be considered acceptable to the public [17].

Table 1. Radionuclide activity concentration of the granite samples from each quarry site.

Table 2. Average activity concentrations (Bqkg-1) in this work and work of other countries. 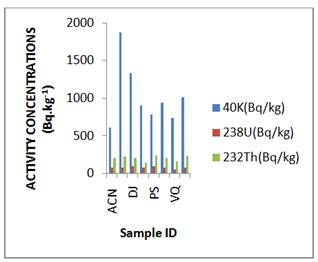 One of the main objectives of the radioactivity measurement in environmental sample is not simply to determine the activity concentrations of 238U, 232Th and 40K but also to estimate the radiation exposure dose and to assess the biological effects on humans. The assessment of radiological risk can be considered in various terms. In this study four related quantities were deduced, these being: (i) the absorbed dose rate (D) in air at 1 metre above the ground surface; (ii) the annual effective dose (Outdoor) from terrestrial gamma radiation; (iii) the radium equivalent activity (Raeq); and (iv) the external and internal hazard index (Hext & Hint). These radiological parameters were calculated from the measured activity concentrations of three main primordial radionuclides in rock samples, using the equations described in section 2.4 above. The values of these radiological hazard parameters as deduced in this work are listed in Table 3.

The annual effective dose rate as presented in Table 3 for the selected quarry sites in this study varies from 0.18 to 0.30 mSv.y-1, with the arithmetic mean value of 0.24 mSvy-1 but when compared with the worldwide effective dose of 0.07 mSv.y-1 [13] the results in this work are higher. The highest AEDE was found in CGC quarry and the lowest found in VQ quarry, the acceptable annual effective dose rate recommended for members of the public without constraint is 1.0 mSv.y-1for safety purposes [19].

The radiation hazard parameters in terms of the external hazard (Hext), internal hazard (Hint) index and radium equivalent activity (Raeq) were also evaluated. The radium equivalent activity (Raeq) is a single quantity that compares the activity concentrations of 226Ra, 232Th and 40K in rock samples in order to obtain a total activity concentration. The results for the calculated Raeq in this work are given in table 3. The values of Raeq range from 331.50 to 529.91 Bq.kg-1 with an average mean of 432.67 Bq.kg-1. It can be seen that the (Raeq) values for all the rock samples in this work are higher than the safe limit of 370 Bq.kg-1 as recommended by the Organisation for Economic Cooperation and Development (OECD), except that of VQ and D/S quarry which is below the accepted safety limit. Therefore, the use of these granite rocks as raw materials for building could pose a health risk to an individual except materials from VQ and D/S. Also, as listed in table 3, the calculated values of the external hazard index for all rock samples studied in this work vary from 0.89 to 1.43 with an average value of 1.18 and the calculated values of the internal hazard index vary from 1.03 to 1.62 with an average value of 1.38, which is greater than the acceptable limit value of unity [19]. These values suggest that it could pose a risk to the health of the inhabitants residing in the areas for a long period of time.

A survey study on activity concentrations of 40K, 232Th, 238U and radiation exposure levels and their possible radiological effects in the granite rock of selected quarry sites in Federal Capital Territorry, Abuja, Nigeria has been carried out using the gamma-ray spectroscopy technique. The results of 40K, 232Th, 238U showed that the activity concentration values of granite rocks vary due to the variation in geological structure of each area of study. From the results it is clear that the average value of radium equivalent (Raeq) for granite rock in the studied area are above the internationally accepted value 370 Bq.kg-1. The calculated results of the average mean value of absorbed dose rate in air from all the samples are higher than the worldwide mean value. The annual effective doses due to natural radioactivity of the rock samples were lower than the average recommended safety value of 1 mSv.y-1.

The calculated results of the average mean value of internal and external radiation hazard index for all the samples is higher than recommended safe limit values. The findings in this work suggest that workers and inhabitants in such areas could be exposed to radiological hazard.

Based on this study, it is recommended that all workers in quarry plants should always put on their face masks and possibly thermoluminescent dosimeters (TLDs) to protect themselves from the levels of radioactive contamination. Also such areas should be avoided or distanced by member of the public for building constructions.

We acknowledge the Centre for Energy Research and Development, CERD, Obafemi Awolowo University, (O.A.U) for allowing us to use their laboratory for analysis.