The liquid drop model(LDM) is used to calculate and describe the binding energies (BE) as a function of the mass number (A) for the most stable nuclei, liquid-drop fission barriers for some heavy nuclei, b-coefficients for the isobaric mass multiplet equation (IMME), Probability profile of 208pb, fusion cross section of some nuclear reactions and calculations for root mean square (rms) charge radii as a function of the atomic number. Some of our calculated characteristics are compared with experimental data, it`s found that there is a good agreement between our calculations and that data. Also, our LDM calculations gave a good agreement with the quantum molecular dynamic (QMD) calculations.

The liquid drop model (LDM) of the nucleus was historically the first model to be proposed as an explanation of the different properties of the nucleus. Since it has regained interest in recent times. The idea of considering the nucleus as a liquid drop originally came from considerations about its saturation properties and from the fact that the nucleus has a very low compressibility and a well defined surface. For instance, the mean distance of two particles in a liquid is roughly given by the value at which the interparticle force has its minimum value, which for nuclei would be ~0.7 fm. However, nucleons in nuclei are, on the average, ~2.4 fm apart. One reason for this big difference as compared with an ordinary Liquid is that the nucleons obey Fermi statistics and a nucleus is thus a quantum fluid. The Pauli principle prevents the nucleons from corning too close to one another. Thus scattering events are very scarce in a quantum fluid, whereas in an ordinary fluid they are predominant.

It is more than 60 years now since the first successful application of the charged liquid-drop model to describe the nuclear binding energies. Brilliant extensions of the Bethe-Weizsacker nuclear drop concept by Meitner and Frisch and by Bohr and Wheeler have been obtained in 1939 and used to explain the nuclear fission phenomenon. Since then many papers have been devoted to the nuclear liquid-drop model formalism and its improvements. Various new terms in the corresponding energy expressions have been proposed but the basic concept of the charged liquid drop which could deform and fission remained valid. It is worth reminding at this point that already in 1953 Hill and Wheeler concluded on the basis of the Fermi gas model, that a curvature dependent term proportional to A1/3should exist in the liquid-drop energy functional. The curvature term was later studied, where its magnitude was adjusted to the experimental fission-barrier heights known at that time [1-4].

Nuclei are bound due to the overall attractive strong interactions between nucleons. The strong interaction arises from the exchange of mesons. The interactions are short ranged and occur mainly between neighboring nucleons. In addition, the nuclear interaction saturates, resulting in a nearly constant interior nucleon density and a surface radius approximately equal to 1.2 A1/3. The analogy of this situation with a droplet of liquid, results in the liquid drop model for the nuclear binding energies in which the binding energy is expressed in the form[5-7]:

The four terms on the right-hand side are referred to as the volume, surface, Coulomb. and symmetry energy terms, respectively. The first term represents the nearest neighbor attractive interaction between nucleons, and the second term represents the correction due to the fact that the nucleons on the surface only interact with those in the interior. The third term is due to the Coulomb repulsion between protons. The fourth term called the symmetry energy arises because the proton-neutron strong interaction is on the average more attractive than the proton-proton or neutron-neutron strong interactions and because the total kinetic energy is minimized when N = Z. The constant a3=0.697 MeV is fixed by the Coulomb interaction and the nuclear size. Typical values of the liquid-drop constants that reproduce the average trends in the experimental data are given by a1 = 15.49 MeV, a2 = 17.23 MeV and a4 = 22.6 MeV

The fission shapes were investigated long time ago by minimizing the sum of the Coulomb and surface energies using mainly a development of the radius in Legendre polynomials. This leads to fission valley through very elongated shapes with shallow necks and difficulties to precise the position of the scission point where the rupture of the bridge of matter between the nascent fragments occurs. Figure 1 shows the schematic diagram for the LDM of fission and binding energy of a nuclei.

The interest in heavy ion fusion reactions at sub-barrier energies has grown considerably in recent years. This interest has arisen from the possibility that such reactions could lead to the formation of super heavy elements, and also from the information they could provide about the interaction of heavy ions in close proximity. 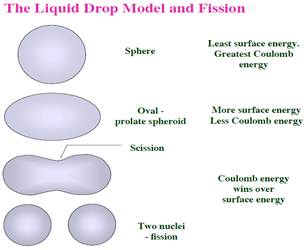 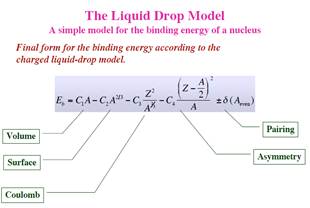 Fig. 1. Scheme for the LDM of fission (upper) and binding energy of a nuclei (lower).

The macroscopic total energy is the sum of the Rotational Liquid-Drop Model energy and the nuclear proximity energy [8]. Constant density and volume conservation are assumed [9-11].

Where the volume EV, surface ES and Coulomb EC energies are given by:

where A, Z and I = (N - Z )/A are the mass, charge and relative neutron excess of the compound nucleus. V (θ) is the electrostatic potential at the surface of the shape and V0 the surface potential of the sphere. The volume and surface coefficients av, as and the effective sharp radius R0 are defined as:

The surface and volume asymmetry coefficients take on the values:

When the two fragments (or colliding nuclei) are separated:

where Ai, Zi, Ri and Ii are the masses, charges, radii and relative neutron excesses of the fragments and r the distance between the mass centers. The discontinuity of a few MeV which appears at the contact point when Z1/A1 and Z2/A2 are very different has been removed linearly from the contact point to the sphere since it is due to the progressive rearrangement of the nuclear matter.

The rotational energy has been determined within the rigid body ansatz. Indeed, it has been shown that corrective terms arising from the orbital motion and the spin degrees of freedom roughly cancel each other, particularly at large deformations.

The shell corrections have been introduced as defined in the Droplet Model with an attenuation factor given by [12,13]

The distortion αa is the root mean square of the deviation of the surface from a sphere, a quantity which incorporates all types of deformation indiscriminately. Using this approach, shell corrections only play a role near the ground state of the compound nucleus and not at the saddle-point.

c1 and c2 are the two radial elongations and a the neck radius. Assuming volume conservation, the two parameters s1 = a / c1 and s2 = a / c2 completely define the shape.

As with any other decay width, the fission width (Γf ) for an excited nucleus is determined by the product of the excited level spacing (Dc) and the sum of the transmission coefficients over all channels leading to fission [16]:

Most measurements of the fission cross sections were performed at energies above the fission barriers. Fission widths for such energies can be written in the form:

where ρc and ρf are the level densities for the equilibrium compound and saddle configurations, respectively, and Bf is the fission barrier height.

Generally, fission barriers are approximated by the equation:

Measured barriers for about 120 nuclei were fitted by the formula:

Function F is cubic, and joined smoothly to a straight line at X = X1:

The rms radius for this sharp-surface distribution is given by

The sharp-surface model could be improved when the surface allowed to be diffuse. This can be do with the Fermi distribution shape:

The rms radius is given by

. In the Fermi distribution model for A nucleons the interior density is given by:

For large A we neglect the

term, and if we assume that the rms radius for neutrons is the same as that for the protons then 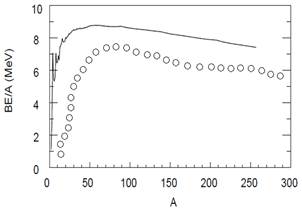 Fig. 2. Experimental values for the BE/A as a function of A for the most stable. 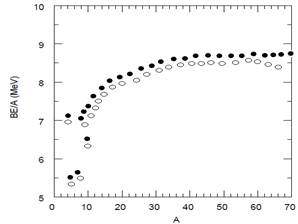 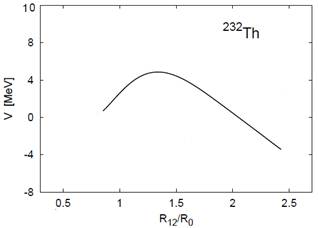 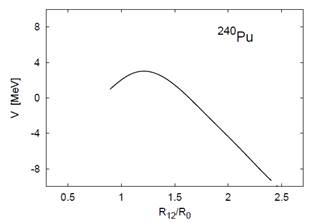 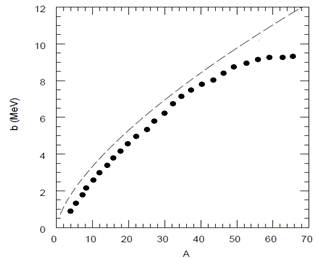 Fig. 5. b-coefficients for the isobaric mass multiplet equation. The closed symbols show the values obtained from experimental binding energies. The dashed line is the prediction of the liquid drop model.

Figure 6 shows the probability density of 208pb which taken from ref. [22, 23 ]. If one were to put the 208 nucleons of 208Pb into a simple cubic lattice, a density of 0.16 nucleons/fm2 corresponds to a lattice spacing of 1.85 fm. The data drawing Gaussian distributions for several nucleons each of which has an rms radius of 0.88 fm and which are spaced a distance of 1.85 fm. The data is compared with LDM and QMD model. We could see LDM gives more nice agreement with the data and the calculations of QMD model gives somewhat agreement with both LDM and the experimental data. 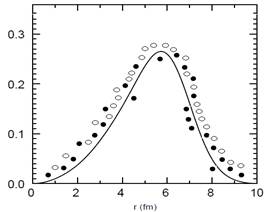 In figures 7-10, the fusion cross sections of the nuclear reactions 9 Be + 144Sm, 16 O + 16O, 48 Ca + 96Zr and 64 Ni + 64Ni are calculated using our LDM and the QMD model. In fact i decided to choose light, medium and heavy systems to see and get a general impression. As we could see there is a good agreement between both models, and in all cases the LDM calculation is higher than the results given by QMD. In figure 11, the LDM calculation for the rms radii as a function of the atomc number is presented. It's clear that the results is fitted as proportionality linear function. 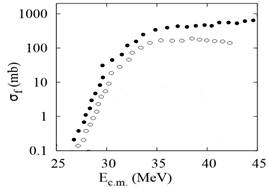 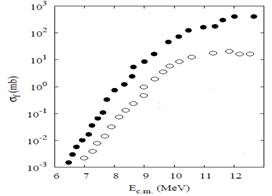 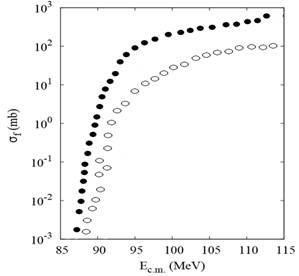 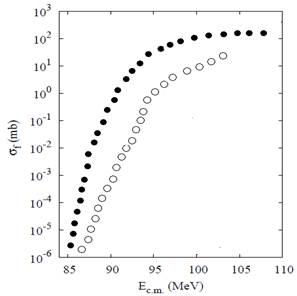 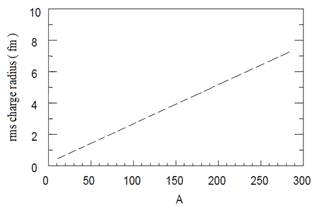 Fig. 11. Liquid drop model calculations for rms charge radii as a function of the atomic number.

Rotational Liquid-Drop Model with the volume, surface  and Coulomb energies is introduced to calculate many characteristics of nuclear reactions for light, medium and heavy systems. The binding energies as a function of the mass number for the most stable nuclei, liquid-drop fission barriers for some heavy nuclei, b-coefficients for the isobaric mass multiplet equation, probability profile of 208pb, fusion cross section of some nuclear reactions and root mean square charge radii as a function of the atomic number are calculated on the frame of LDM calculations. LDM calculations are compared with experimental results and QMD model calculations as well. The comparison was somewhat good and this is indicate that LDM is a good predication for all these characteristics.