Renal cell carcinoma presenting with pulmonary embolism is rare occurrence as evident by published few isolated case reports. However pulmonary embolism associated with compressive myelopathy as presentation is not reported. Authors reports a 32 – years - female who presented with complaints of rapidly progressing difficulty and shortness of breath along with numbness and spastic quadriparesis for seven days and also developing painful swelling involving right upper limb for 5 days. CT pulmonary angiography confirmed diagnosis of pulmonary embolism; Doppler study also revealed thrombosis of right basilic and cephalic veins and managed with anticoagulants. On further evaluation, she was detected to have mass lesion in right kidney and osteolytic lesion of C6 vertebral body. She underwent C6 corpectomy and anterior cervical plating followed by radical right nephrectomy. Our case is unique as it had both pulmonary embolism and cervical myelopathy as initial manifestation of renal cell carcinoma.

The renal cell carcinoma (RCC) comprises approximately 2-3% of malignant lesions in adult and associated with high incidence of early metastasis. About 20-30% patients may have distant metastasis at presentation, of these 1.6-3.6% cases include solitary bone metastasis and another 50% may develop during follow-up. 1,-4 It is the one of commonest neoplasm to metastasizing to the head and neck region, preceded only by breast and lung carcinoma.

A 32 - year – old female presented to our emergency with complaints of rapid worsening of shortness of breath for seven days. She also developed numbness and weakness of all four limbs for same duration. She also noticed painful swelling of right upper limbs with increased swelling 5 days prior to admission. Although she had mild neck pain for last six weeks. Examination on admission revealed pulse rate 120/minute with respiratory rate 38 per min with prominent accessory muscle of respiration. She was immediately intubated and kept on ventilatory support. Auscultation showed diminished breath sounds in right infra maxillary and infrascapular region. Neurological evaluation showed spastic quadriparesis of grade upper limbs 2/5, and lower Limb 4/5. Plantars were bilateral extensor associated with graded sensory loss below C7 dermatomes. 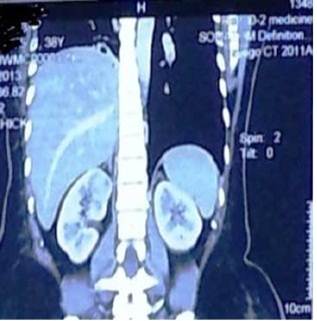 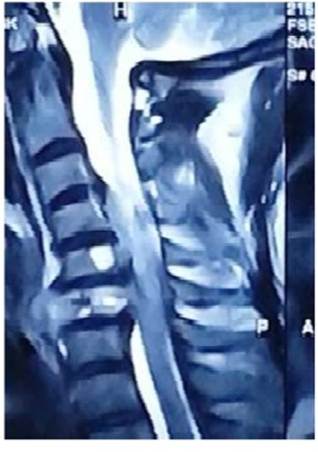 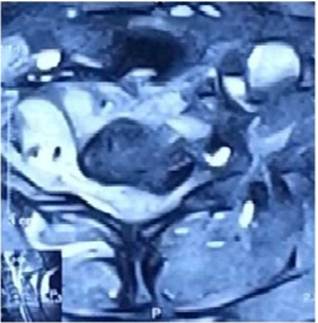 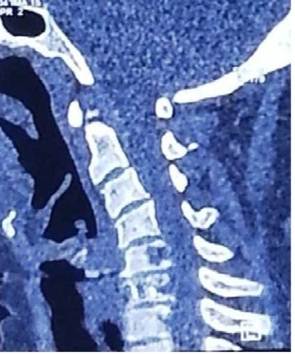 a. sagittal view showing destruction and expansion of C6 vertebrae body with involvement of bilateral pedicle. 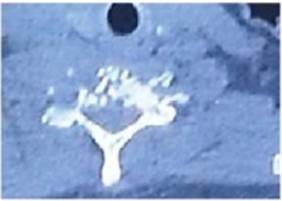 The classical presentation of RCC comprises pain, mass in the flank region and hematuria as typical triad, however, characteristic symptoms can only be observed in approximately 10% of cases. Occult presentation of RCC as is observed in up to 30%, and is incidentally picked while radiological study carried out for other causes. 1, 3, 5.

The hematogenous spread is main route for systemic metastases of RCC. RCC most commonly metastasizes to the lungs (45 %), bone (29 %), lymph nodes (21 %) and the liver (20. %) [6], although metastasis to the neck region much rarer, and occur only in 5% cases. RCC can have bizarre manifestations including pulmonary embolism which may appear during any stage of patient illness, causing severe respiratory distress requiring urgent admission and care including ventilatory support. However, very unusually, pulmonary thromboembolism can be first presentation of occult RCC. 4, 7-9 Pulmonary emboli usually arise from thrombi that originate in the deep venous system of the lower extremities, other rare site include pelvic, renal, or upper extremity veins or the right heart chambers. 7

The thromboembolism presents as complication of underlying venous thrombosis and its classic presentation is of pleuritic chest pain of abrupt onset, hypoxia and difficulty of breath. Hematological tests D dimer test 10, arterial blood gases and total leukocyte count can be supportive. Imaging study like multidetector- C T angiography is the standard for diagnosing pulmonary embolism. Pulmonary angiography, when MDCTA is not available.

She also noticed painful swelling of right upper limbs with increased swelling could be caused by weakness, immobilization or extension of thrombus from central venous canula or extension superficial thrombophlebitis,

The early diagnosis of spinal metastasis is important as prognostic indicator of functional outcome, which depend on neurologic status just prior to neurosurgical intervention. Vertebral body is the most frequent site in the vertebrae and predisposed by presence of bone marrow and abundant vascularity. The metastatic deposit cause substitution of the healthy bone by metastatic tissue and sometimes an acute pathological fracture can cause compression of neural structure with secondary spinal canal stenosis causing myeloradiculopaythy. Cervical spinal metastasis from RCC can also cause neck pain, compressive myelopathy and sensory loss. It is interesting to note that combined feature of thromboembolic event and feature of compressive myelopathy as initial presentation is not reported in the literature till date and represents first report of such cases in the world.

Our patient improved following decompressive anterior spinal surgery. 12 MRI is considered the gold standard technique for evaluation of spinal metastatic lesions; further fat suppressed MRI images can be useful in osseous lesions evaluation that may show contrast. However, imaging provides an accurate anatomical estimation, but biopsy of lesion in vertebra by suitable Ultrasound or CT guided is necessary. 7, 9, 11

The main role of surgery of metastatic spinal lesion is improvement of quality of life and treatment target of primary bone tumor is to preserve life. The best treatment is local control of the disease and restoration of the Spinal function. 13

Every cases of thromboembolism presenting to emergency services should be investigated for suspected occult malignancy including occult renal cell carcinoma and detailed history, systemic examination and detailed imaging is advised to early detection and provide prompt management and to avoid potentially treatable condition. A very high degree of vigilance is required to suspect such occult lesions.