A giant, ventrally placed cervical spinal neurenteric cyst in a pediatric patient presented with acute onset quadriparesis. Magnetic resonance imaging showed a large cyst in the cervical spine lying ventral to the cord at C2-C3 levels and causing severe cord compression. Cyst decompression surgery involved laminoplasty, cyst drainage and wall excision with minimal cord retraction. The procedure resulted in immediate improvement of muscle power in all four limbs of the patient. Ventrally placed intradural lesions in the cervical spinal cord can be a surgical challenge and the decision between the appropriate anterior or posterior approach should be made on the individual patients clinical and radiological profile.

A 9- year old girl presented to the emergency department with acute onset rapidly progressive quadriparesis for the last 20 days. The patient was conscious and obeying commands. Both her upper limbs were in a state of complete flaccid paralysis with muscle power of 0/5. Her lower limbs had spastic paraparesis with muscle power of 2/5 (Medical Research Council scale, United Kingdom). Her knee and ankle jerks were 2+, while all the other deep tendon jerks were diminished or absent. Her plantars were upgoing (Babinski sign positive). The patient’s MRI showed a large cystic lesion of the cervical spine lying ventral to the cord at C2-C3 levels and causing severe cord compression. T2w images showed homogeneous hyperintensity and postcontrast images showed no enhancement of the cyst wall (figure 1). These features were suggestive of a giant, ventral, cervical neuroenteric cyst.

The patient was operated upon with a C2-C3 laminoplasty and cyst fenestration. Following dural opening, the cord was gently retracted to one side to expose the cyst, lying ventral to it. The cyst wall was smooth and fleshy and greyish in colour (figure 2). Blood stained clear fluid was drained from the cyst, and the cyst wall lining was sent for histology with a suspicion of neuroenteric cyst. The cord was well decompressed at the end of surgery. Postoperatively, the patient’s muscle power improved in her right upper and lower limbs on the first day itself upto 3/5 (Medical Research Council scale). Her plantars became equivocal and the spasticity in her lower limbs decreased.

Neurenteric cysts are rare congenital lesions found intracranially and in the spine. They result from an anomalous persistence of the endodermal - neuroectodermal canal and hence are lined with endodermal epithelium [10]. Their most common location in the spine is the cervico-dorsal region although lumbar and rarely presacral locations have also been seen [1,2,6]. They are usually intradural extramedullary although they may be intramedullary also[11]. They usually lie ventral to the spinal cord. Associated vertebral anomalies, gut cysts, bowel duplication, the presence of keratin markers and mucin-secreting cuboidal or columnar intestinal epithelium in their walls confirm their endodermal origin [3,4,5]. This was a rare case in which a giant intraspinal cyst was present without any associated vertebral anomalies or other systemic findings (figure 3). For ventrally placed lesions in the cervical spinal cord, both anterior and posterior approaches have been described [7,8,12]. Posterior approaches with gentle cord rotation may provide adequate exposure for safe removal of ventrally placed spinal cord lesions, as in the index case. However in certain cases, anterior approaches become necessary especially in ventrally placed midline lesions where excessive cord traction from a posterior approach would entail risk of development of neurological deficits in the patient [9]. 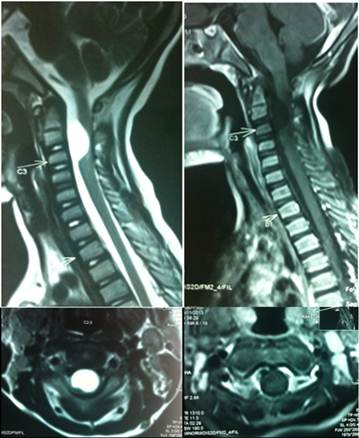 Figure 2. Intraoperative image showing cord pulled to one side and greyish cyst wall of the giant neuroenteric cyst. 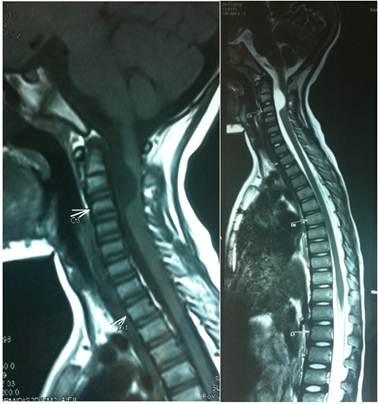 Spinal neurenteric cysts are usually ventrally located intradural lesions that pose a surgical challenge for their safe removal while minimising risk of postoperative deficits. Lesions off the midline can be safely removed using a posterior approach by ensuring wide exposure and gentle traction on the cord. With adequate decompression, surgical results are excellent and operated patients show an immediate improvement in limb power.