Bilateral thalamic infarcts are a rare, but sometimes they can present as memory loss as the chief complaint. So they should always be kept as a differential in a patient with dementia. We report a short case series of 3 patients who presented to our center with the history of memory impairment and turned out to be isolated thalamic infarcts.

Retrograde amnesia occurring together with anterograde amnesia has been noted after thalamic injury, infarction and Wernickes-Korsakoff syndrome which involves the thalamus [1]. A study by Kumral et al. demonstrated that only 0.6% of stroke patients at their hospital had a bithalamic infarct over a seven year period [2]. We report a case series of 3 patients who presented with the history of memory impairment and turned out to be isolated thalamic infarcts.

A 55 year old male, smoker presented with history of memory loss for 2 months. Memory loss was more for recent events. There was also difficulty in focusing especially while looking downwards e.g. while using mobile. He used to miss the objects lying on the floor and his son observed that he "looked upwards" while waking up in the morning. There was also history of hyperphagia and hypersomnia. When asked about the past history, there was history of Right sided weakness 6 months back, which had resolved completely. He was detected to have bilateral thalamic infarcts with hemorrhagic transformation at that time (Fig. 1A). On examination, his MMSE was 20/30; he was faltering only in memory (both visual and verbal). His attention, orientation and calculation were normal. He was also having vertical gaze palsy. Follow-up, MRI Brain did not reveal any significant resolution of the infarct (Fig 1B). We also did Magnetic resonance Angiography Brain and MR Venography Brain; both of them were normal.

Another 81 year doctor, hypertensive, presented with history of difficulty in remembering names of commonly used medications and loss of recent memory. He had no other complaints. His MMSE was 24/30. Rest of the neurological examination including extra ocular movements was with in normal limits. He was a found to have left medial and anterior thalamic infarct. (Fig. 1C)

Another 61 year old male, diabetic and hypertensive presented to us with Right sided weakness. His MRI Brain revealed left anterior thalamic infarct (Fig.1D). He also had memory problems which were more for recent events. On examination, his MMSE was 22/30. Verbal and visual memory both were impaired. He had emotional lability also. 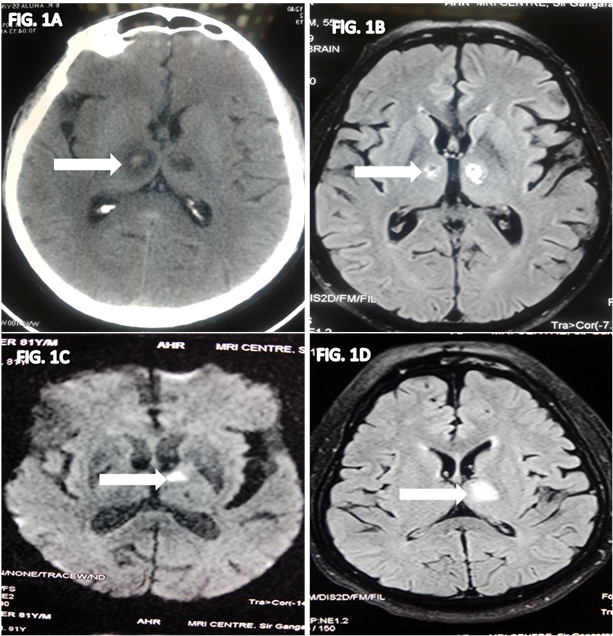 Although infarcts restricted to the thalamus were reported for the first time more than 100 years ago by Dejerine and Roussy , they remain a rare presentation of stroke and account for only 11% of all vertebra-basilar infarcts. Bilateral involvement has been reported in a limited number of cases and results from a combination of predisposing factors and anatomic variations. [3]. Studies of patients with thalamic damage show that thalamus plays a role in several aspects of recognition. Of these, memory has always received the attention due to striking cases of Diencephalic Amnesia i.e. severe memory loss due to thalamic damage [4].

Two considerations must be taken into account when attempting to diagnose lesions of the thalamus that thalamic nuclei are small, so that lesions producing highly specific effects are uncommon (although they do occur), and  the thalamus is immediately bounded by the internal capsule and is in close proximity to the deep motor nuclei of the cerebral hemisphere (putamen, caudate and globus pallidus), so that thalamic lesions frequently are accompanied by symptoms  from damage to these other structures. However, occlusion of small vessels results in a number of symptoms characteristic of the thalamic syndrome. [4] The thalami receive their blood supply from both the anterior (internal carotid arteries) and posterior (vertebro-basilar system) circulations, and several variations in this supply are known to exist. [5] When the thalamus is infarcted, patients may have symptoms including vertical gaze palsy, memory impairment, confusion and coma. [6] Damage to several and distinct areas, contributes to amnesia, although the nature of memory deficit may be different. These areas include large areas in the anterior and medial part of thalamus including anterior nuclei, midline and intralaminar structures. Posterior and lateral lesions can evolve without any memory problem. [5] There are 4 major thalamic vascular territories, each with a predilection for supplying particular groups of nuclei. These are the (1) tuberothalamic (2) inferolateral, (3) paramedian, and (4) posterior choroidal vessels. The areas supplied by Tuberothalamic and paramedian artery are chiefly concerned with arousal, learning and memory. The syndrome resulting from infarction of tuberothalamic artery is characterized by fluctuating consciousness, disorientation in time and place and apathy initially. Later on, it can present as impairment of new learning and temporal disorientation. These are more prominent with left sided lesions which involve both verbal and visual memory. Our case number 3 had left sided lesion and his both verbal and visual memory tests were impaired. Impairment of visual memory impairment is seen with right sided lesions. When stroke is confined to the most anterior region of the thalamus, memory is severely impaired but language is spared [7]. In cases of bilateral thalamic infarcts, top of the basilar syndrome and deep cerebral venous thrombosis should be taken into consideration. [6] Occlusion of the top of the basilar artery or of the so-called artery of Percheron – a developmental variant replacing the perforating medial thalamic arteries – is responsible for arterial ischemia. On venous side, the posterior group of thalamic veins drains into the straight sinus. A thrombosis of this vessel may also lead to a bilateral partial venous infarct due to the upstream overpressure [8]

Bilateral infarction of paramedian artery may result in severe impairment, disorientation, confusion, hypersomnolence, deep coma "coma vigil" or akinetic mutism with severe memory impairment and prominent behavior features with eye movement abnormalities. The amnestic syndrome is also termed as thalamic dementia, as used in Cruetzfeld- Jacob disease and Fatal familial Insomnia. [7] All these features were present in our case no. 1. Prognosis of thalamic infarction is generally regarded as being rather good. Compared with lesions of cerebral cortex or other subcortical structures in both adults and children in terms of mortality and motor deficits but the cognitive and psychiatric manifestations persist. [7]. However complete recovery has also been reported. [9] In one study, most of the cases of thalamic stroke were associated with infarcts in other territories ( 60%) whereas isolated lesions were present in only 40% of cases, however the age distribution of both the groups was same .[10] Our cases had isolated Thalamic involvement, so there symptoms were less motor and more related to behavior.

Possibility of thalamic involvement with stroke should always be kept if the patient presents with recent onset of memory impairment (Thalamic Dementia). Physicians should always remind this because, not only the management of dementia, but evaluation of stroke is also important. Prospectively, always watch for memory abnormalities in patients with stroke.