Sequential development of extradural hematoma (EDH) during decompressive craniotomy and evacuation for acute subdural hematoma (ASDH) causing massive brain bulge is rare, it may represent to be first indication of hematoma development. About thirty seven cases are published in the form of isolated case report till date. Management is debated, as first to carry out exploratory burr-hole or necessity of getting CT scan head or intraoperative ultrasonography imaging to ascertain the diagnosis. Authors report a 40-year male, who developed EDH on contralateral side during evacuation of traumatic acute subdural hematoma during intraoperative period, wound was closed, patient was directly shifted to CT scan suit and got CT scan revealed ED, underwent evacuation of EDH by retuning back with good outcome. Awareness of occurrence of EDH development as a cause of massive intraoperative brain - bulge, which is not getting relieved on routine anaesthetic measure, may need urgent CT scan or at least intraoperative ultrasonography imaging is to diagnose early and provide appropriate management.

Development of extra-axial haematoma on contralateral hemisphere during craniotomy surgery for evacuation of traumatic ASDH presenting with brain bulge is a potential life threatening complication, if existence of such occurrence not suspected. [1-8] It may present as extradural, subdural or intracerebral hematoma. However, development of ASDH is well reported in literature [3,9]. However, incidence of EDH, freshly developing is extremely rare, with paucity of literature, only reported in the form of isolated case report [1,4,8]. Intraoperative brain bulge can be commonly caused due to formation ipsilateral enlargement of hematoma volume or intra-parenchymal bleed, hydrocephalus enlargement or rarely but important causes are formation of ASDH, EDH on contralateral side. Authors report an interesting case of severe head injury with ASDH, who developed acute brain bulge intraoperatively during decompressive craniectomy, NCCT head revealed massive extradural hematoma, located on contralateral cerebral hemisphere associated with fracture of overlying calvarium to the surgical procedure, which necessitated emergency evacuation. Current study emphasizes getting immediate CT scan directly from operating room and return back to carry out urgent evacuation of hematoma can be a life saving measure without wasting of valuable time and providing golden opportunity for good neurological recovery.

He underwent left frontotemporoprarieal scalp flap and decompressive craniectomy. Brain was lax after hematoma evacuation, however suddenly brain bulge noticed just prior to beginning of dural closure, all routine measure was taken to reduce he intracranial pressure, but no relief, so development of hematomas was possibility as it was not responding to routine anaesthetic measure. Hence a decision to get CT scan head after rapid wound closure was planned and shifted to CT scan suit and back to O.T. following NCCT head, which showed thick right sided parietal EDH with gross mid line shift. Decompressive craniectomy with EDH evacuation was carried out. He needed electively ventilated for five days. He was discharged on tenth postoperative day with GCS score of 14). (Fig-2). Subsequently he underwent split autologus cryogenic preserved skull flap cranioplasty at six months following first surgery (fig-3). 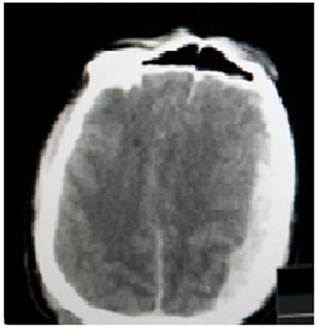 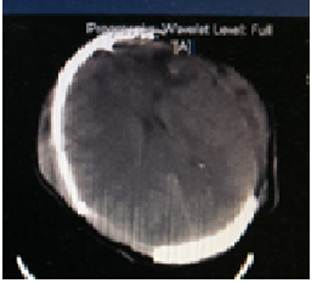 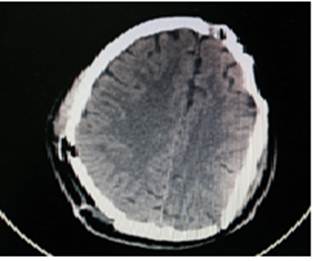 Development of extra-axial haematoma in opposite hemisphere in a sequential manner during craniotomy surgery for evacuation posttraumatic ASDH can be caused by epidural or subdural hematoma. Such occurrence is extremely rare but presents a challenge for accurate and rapid a diagnostic and surgical management.

Contralateral hemispherical evolution of ASDH development during surgery is reported literature [3,9,11]. However, EDH evolution during craniotomy or decompressive craniectomy surgery for traumatic SDH evacuation is still rarer. [1,4,6,7] In a review by Shen et al, found only 32 published cases, who developed contralateral EDH during craniotomy for traumatic acute SDH evacuation in 2013 [4]. However, exact mechanism of contralateral epidural hematoma development remains unknown. Various postulates are put forward to explain the intraoperative development of EDH, causing significant mass effect and brain bulge. Tomycz et al postulated rapid brain shift caused by craniotomy lead to shear stress on bridging veins of contralateral side, which may got torn leading to formation of EDH and ongoing collection of blood over time, may enlarge to cause brain bulge during surgery, which is unresponsive to anaesthetic mediation [9]. According to Takeuchi et al, early initial CT scan is usually done within few hours following injury and these scan may miss such hematoma development, which may represent as natural course of evolution [4]. However, Feuerman et al tried to define intraoperative hematoma as occurrence of hematoma, which are not observed during initial CT scan, but developing slowly following surgical evacuation either during surgery or in the immediate postoperative period [1].

According to chronology of evolution, such hematoma may manifest either in the period after completion of surgery or during intraoperatively. Former can present in the form of delay reversal from anaesthesia or development of fresh neurological deficit after recovery from surgery during convalescence in the postoperative period. Further, intraoperative development of EDH is much rarer, but can occur during any stage of surgical procedure of intracranial surgery i.e. bone flap elevation or following dura opening or during evacuation of hematoma phase, may present with catastrophic brain bulge as occurred in the current case.

If acute brain bulge noticed intraoperatively, which fails to respond well to the anaesthetic maneuver routinely practiced i.e. head elevation, infusion of osmotic agent, diuretics, maintaining air way patency, avoidance of over-rotation of head, hyperventilation, switching over to total intravenous anaesthetic agent anaesthesia and in such resistant brain bulge. Routine intraoperative neurosurgical manoeuvre  should be applied first to control further brain bulge, cisternal CSF release, ventricular tapping to release CSF are surgical adjunct. Another important indicator of remote bleeding during craniotomy is progressive brain bulge with recurrent oozing or venous bleeding in the surgical cavity causing repetitive failure to secure hemostasis. But in few cases, brain continue to bulge and not responding favourably to either surgical or anaesthetic maneuver, a possibility of remote hemorrhage should be kept. Awareness of such remote hematoma occurrence is very essential for neurosurgeons.

Ascertaining the causes of brain bulge and providing appropriate remedial measure is very important requiring urgent neuro-imagings. It can be diagnosed with intraoperative ultrasonography or CT scan or exploratory burrhole placement without imaging study or getting CT scan first and planning of subsequent surgery depends on immediate availability of CT scan or Ultrasound machine. However, CT scan of head is time consuming in addition requires shifting out and in off the operating room unless or institution having Intraoperative mobile CT scanner.