Air pollution is potential environmental risk factors for stroke. There is strong association between short term exposure to air pollution and admission to hospital for stroke and mortality from stroke. These associations were strongest in low and middle income countries, suggesting the need for policy changes to reduce personal exposure to air pollutants. Ambient sulfur dioxide (SO2) is considered a risk factor for ischemic stroke and seizure. We are reporting a case of young male without identifiable risk factors presented with posterior circulation ischemic stroke, which occurred after an accidental SO2 exposure. Endothelial dysfunction and inflammation are the possible underlying pathophysiology for development of stroke. Understanding the mechanism between SO2 exposure and the onset of brain ischemia would be helpful in preventing devastating health hazard.

Stroke is a common cause of death and a leading cause of long-term severe disability in both developed and developing countries.1 The global burden of stroke related disability is high and continues to rise. This has been primarily attributed to an ageing population in high income countries and the accumulation of risk factors for stroke, such as hypertension, diabetes, obesity and smoking, in low and middle income countries.2 Epidemiological studies show an association between air pollution and ischemic stroke.3 Effective pollutants may include sulfur dioxide, nitrogen dioxide, ozone, carbon monoxide and particulates.4

SO2 exposure exacerbates the states of cardiopulmonary and cardiovascular diseases and increases the risk of premature death from circulatory system causes, including ischemic stroke. But mechanism of its effects on the brain is not understood currently. The involvement of SO2 may be challenged on the basis that it tends to be correlated with toxic combustion particles,5 yet pathophysiologic images of animal stroke model after inhalation of SO2 show brain injuries similar to those caused by cerebral ischemia.6 We are presenting a case of posterior circulation stroke after accidental sulfur dioxide exposure.

A 31 years old male chemical engineer had accidental exposure of sulfur dioxide while working in his sugar mill plant. He had mild headache, dizziness and throat discomfort for 2 weeks. Later, he had 3 episodes of teeth clenching with up rolling of eyeball with numbness in right upper limb and lower limbs lasted for few seconds without any loss of consciousness. He was evaluated at local hospital and diagnosed to have simple partial seizures and was put on antiepileptic drug. Around 6 weeks after the exposure, he had acute onset weakness in all 4 limbs with difficulty in speaking followed by altered sensorium. There was no history of diabetes mellitus, hypertension, cardiac disease and migraine. He denied any antecedent medical illness, drug abuse or addiction. There was no history of any cardiac or cerebrovascular disease at young age in family. 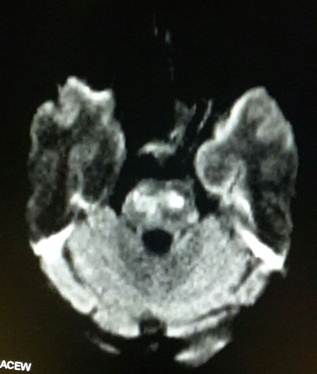 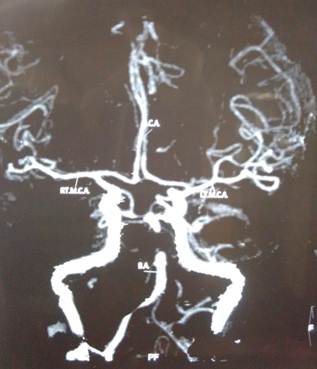 A diagnosis of posterior circulation stroke and basilar artery thrombosis after sulfur dioxide exposure was made, as other causes of stroke like cardioembolic, thrombophilia and familial were ruled out with appropriate investigations. He was managed in intensive care unit with low molecular weight heparin, antiplatelet, statins, antiepileptic and physiotherapy. His dysarthria and limb weakness improved gradually. He was ambulatory with minimal support at the time of discharge.

Outdoor air pollution is an important risk factor for cardiovascular disease throughout the world, with particulate air pollution alone responsible for over three million deaths each year.2The short term effects of air pollution on cardiac disease, including myocardial infarction and heart failure, have received much attention. It is less certain whether acute exposure to air pollution is a trigger for cerebrovascular disease, especially stroke.7 SO2 resulting from the burning of fossil fuels is a major component of air pollution. In urban areas, SO2 originates from domestic heating, power generation through thermal power plants and motor vehicles. SO2 is used routinely in sugar mill plants to reduce and prevent color formation in white refined sugars. Its inhalation is responsible for adverse health effects due to its absorption by respiratory tract mucous membranes.8 Endothelial dysfunction and inflammation have been emphasized as pathologic mechanisms leading to cerebral ischemic stroke. The cerebrovascular endothelium plays a critical role in the regulation of normal vascular homeostasis. Perturbation of endothelial function is an important step in the pathogenesis of ischemic stroke. Endothelial dysfunction is usually caused by altered production of vasoactive factors, especially elevated endothelin-1 expression. It is most potent vasoconstrictor and contributes to the reduction of blood flow, interruption of energy metabolism, and following injuries associated with ischemia in the brain.9

Increases in concentrations of ambient sulfur dioxide were associated with increased probability of emergency department visit for ischemic stroke and seizure. Air pollution is a modifiable risk factor for stroke and seizure. Prevention of some cases of stroke or seizure may be achieved by improving air quality or by regulating the allowable levels of exposures to ambient gases in the workplaces.10 To the best of our knowledge, this is the first case report of a posterior circulation ischemic stroke occurring as a complication of sulfur dioxide exposure.