Gongronema latifolium Benth is a plant with soft and pliable stem. It is widely used in the West African sub-region for some medicinal and nutritional purposes. The plant belongs to the family of asclepiadaceae. Gongronema latifolium Benth whose leaf is bitter is commonly called ‘‘utazi’’ and ‘‘arokeke’’ in South Eastern and South Western parts of Nigeria respectively. It is primarily used as vegetable and spice in traditional folk medicine [3,4]. The plant has been used traditionally in the South Eastern part of Nigeria for the management of diseases such as diabetes and high blood pressure [3]. Egbung [5] reported the presence of phytochemicals (tannins, saponins, alkaloids, flavonoids and hydrocyanide), proximate (crude fat, ash, fat and protein), mineral elements (Cr, Cu, Se, Zn and Fe) and vitamins (A, C, riboflavin, niacin and thiamine) in the root, bark and twig extracts. The reported vitamins possess antioxidant activities particularly A and C [6].

Acetaminophen or Paracetamol is a commonly used over-the-counter analgesic (pain reliever) and antipyretic (fever reducer). It is commonly used for the relief of headaches and other minor aches and pain. It is a major ingredient in many remedies for cold and flu. The onset of analgesia is approximately 11 minutes after oral administration of paracetamol [7], and its half-life is 1–4 hours. Though acetaminophen is used to treat inflammatory pain, it is not generally classified as a nonsteroidal anti-inflammatory drug (NSAID) because it exhibits only weak anti-inflammatory activity. Anti-inflammatory drugs like NSAIDs are used to reduce the swelling and pain of inflammation. Long-term or prolong uses of NSAID can cause adverse side effects and damage human biological system such as liver.

Acetaminophen is safe for use at recommended doses (1000mg per single dose and up to 4000mg per day for adults), but overdose of acetaminophen can cause potentially fatal liver damage and, in rare individuals, a normal dose can do the same. Paracetamol toxicity accounts for most drug overdose in the United States and the United Kingdom [8,9]. Prolonged daily use of acetaminophen increases the risk of upper gastrointestinal complications such as stomach bleeding [10], and may cause kidney or liver damage. Paracetamol is metabolized by the liver and is hepatotoxic. The side effects may be more likely in chronic alcoholics or patients with liver damage. Damage to the liver or hepatotoxicity results not from acetaminophen itself, but from one of its metabolites: N-acetyl-p-benzoquinoneimine (NAPQI). NAPQI depletes the liver's natural antioxidant glutathione and can directly damages cells in the liver thereby leading to liver failure. The risk factors for its toxicity include excessive chronic alcohol intake, fasting or anorexia nervosa, and the use of some drugs. Therefore, the aim of this study was to examine the histological and hepatoprotective effect of leaf extract of Gongronema latifolium Benth against acetaminophen-induced hepatic toxicity.

This study is significant because the use of acetaminophen bought over the counter for self-medication without prescription is already in the increase. Overdose of this acetaminophen may lead to various biochemical changes in a patient. Therefore, the use of ethanolic leaf extract of Gongronema latifolium Benth as a histological and hepatoprotective agent could aid in antagonizing the negative effects of this drug.

The leaves of Gongronema latifolium Benth was harvested at Itaja-Amaegbu, Olokoro, Umuahia, Abia State, Nigeria. The plant was identified at the Department of Plant Science and Biotechnology, Abia State University, Uturu. The plant material was sun-dried. The dried leaves of Gongronema latifolium Benth was milled to a powder. About 250g of the powder was extracted with 800ml of ethanol by cold maceration for 48 hours and filtered. The filtrate was evaporated to dryness and the ethanol recovered.  The concentration of the extract was made in normal saline for the experiment.

Fifty male albino rats aged 7 weeks were used in this study. The rats were bought and kept in the animal house, Department of Biochemistry, Faculty of Biological and Physical Science, Abia State University, Uturu. The animals were allowed to acclimatize for 7 days under standard laboratory conditions with free access to commercial rat feed and water.

In the test groups, the drug and extract were administered through oral route using a gavage tube. All animals were allowed free access to food and water ad libitum. Standard laboratory protocols for animal studies were maintained. Approval for animal studies was obtained from the Animal Ethics Committee of the College of Medicine and Health Sciences, Abia State University, Uturu, Abia State, Nigeria.

On the twenty second day, the animals were anaesthetized with chloroform and sacrificed. Blood was collected by cardiac puncture from each animal into dry test tubes. The blood sample was allowed to stand for about 15 minutes to clot and further spun in a centrifuge. Serum was separated from the clot with Pasteur pipette into sterile sample test tubes for the measurement of liver function.

After sacrificing the animals, the liver of representatives of each of the five groups were taken for histological analysis.

The results are as presented in the tables and plates below 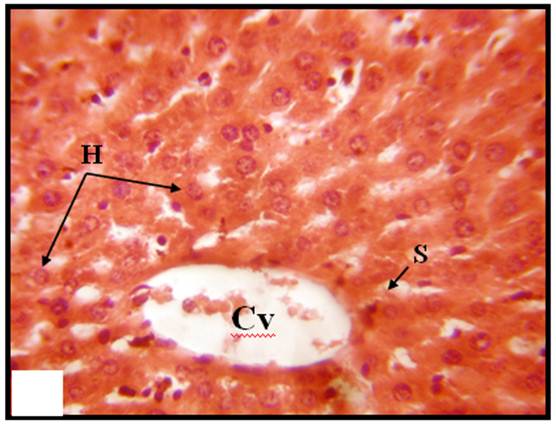 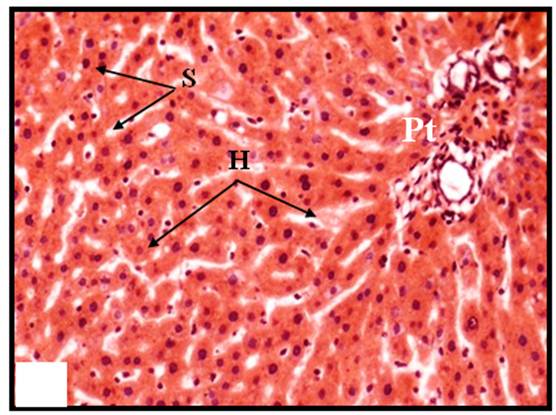 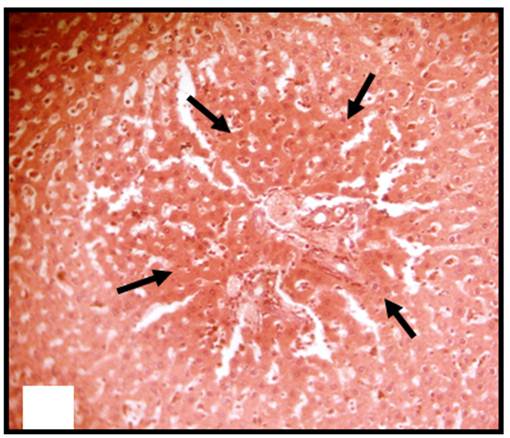 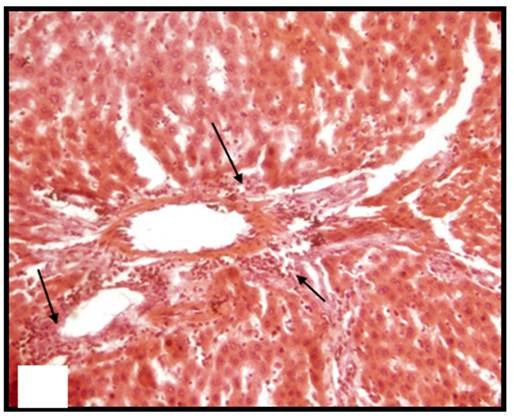 Plate 2. Photomicrographs from Liver section of rat administered with 1g/kg b.wt of Acetaminophen [APAP] only (group 2) showing degeneration of hepatocytes in some periportal zones which appear more eosinophilic [thick arrows - A]. Inflammatory cellular infiltration within and around the portal tract is also evident [thin arrows - B]. [STAIN: H & E] [Mag: A – x100; B – x200]. 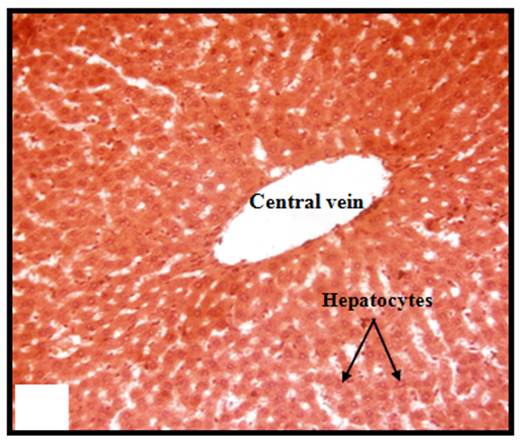 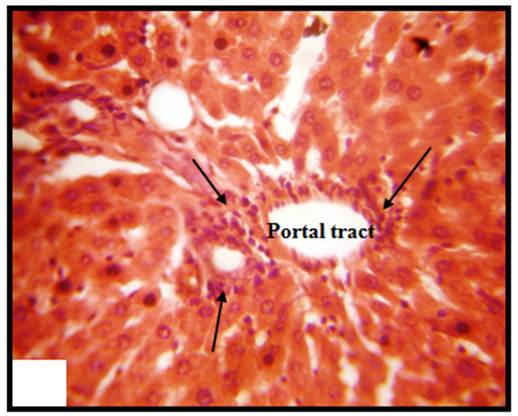 Plate 3. Photomicrographs from Liver section of rat in Group 3 administered with APAP and 200mg/kg b. wt. of the leaf extract showing no obvious histopathological changes on the hepatocytes surrounding the central vein [A] and the portal tract [B]. However, the central vein appears mildly dilated and mild cellular infiltration is observed at periportal region [arrows]. [STAIN: H & E] [Mag: A – x200; B – x400]. 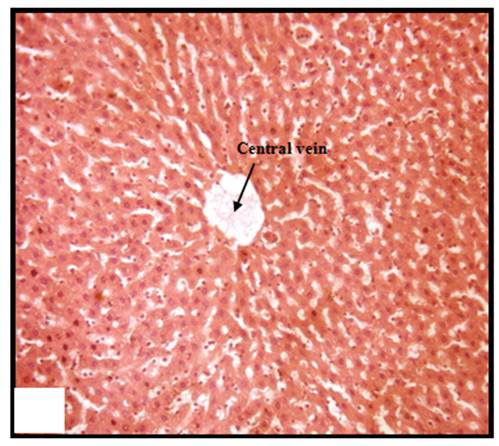 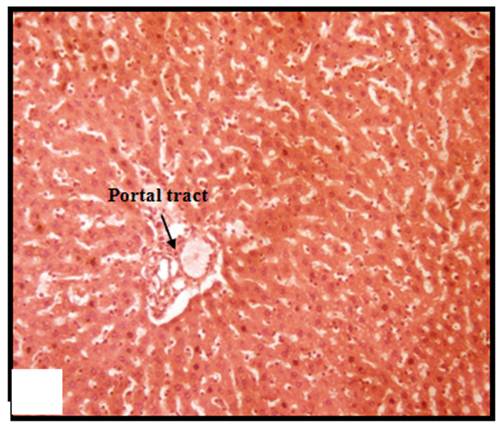 Plate 4. Photomicrographs from Liver section of rat in Group 4 administered with APAP and 400mg/kg b.wt. of the leaf extract showing no obvious histopathological alteration of the central vein, portal tract and surrounding hepatocytes.[STAIN: H & E] [Mag: A – x100; B – x100]. 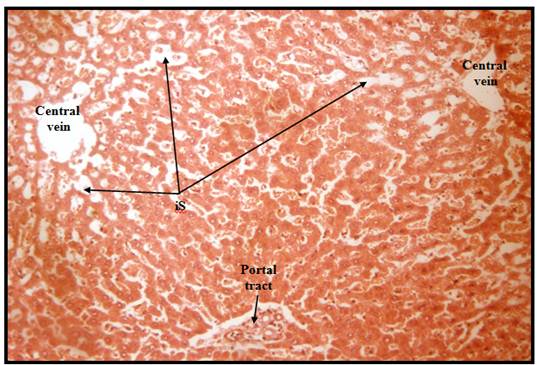 The results of the liver enzymes ALT, AST and ALP of the control animal showed a significant increased (p<0.05) after administration of acetaminophen (1000mg/kg). ALT, AST and ALP increased showing hepatic toxicity caused by the excess dosage of acetaminophen administration. Liver is an organ involved in many metabolic functions and is prone to xenobiotic injury because of its central role in xenobiotic metabolism [11]. Hepatotoxic drugs cause damage to the liver. Large doses of acetaminophen may induce hepatic necrosis in humans and experimental animals [12]. Paracetamol was reported to be hepatotoxic by Wallace [13] and was used in this study to induce the liver damage. Elevated levels of serum enzymes as observed in the group administered acetaminophen only are significance of cellular leakage and loss of functional integrity of cell membrane in liver.

Most protein found in the plasma are synthesized by the hepatocytes and secreted into circulation. A reduction in the protein levels in the serum (group 2) may be a result of possible damage to the hepatocytes induced by excess dose of the acetaminophen. The serum protein level is a marker of the synthetic function of the liver and a good guide to assess the severity of the damage [15]. Total protein, albumin and globulin concentrations reduced significantly after the administration of acetaminophen, but were stabilized even at the lowest concentration (200mg/kg bw) of the leaf extract administered (table 2). This implies that the leaf extract of Gongronema latifolium Benth encourages protein synthesis and may protect the hepatocytes from damage.

There was significant (P<0.05) protection of the liver marker enzymes levels as well as bilirubin and serum proteins levels on administration of the leaf extract of Gongronema latifolium Benth for 21 days at a dose of 200, 400 and 600 mg/kg bw. The protective effect observed in this study may be due to the prevention of the leakage of these intracellular enzymes as a result of the presence of polyphenols and flavonoids in the leaf extract as well as their membrane stabilizing activity which may be attributed to their ability to mop up free radicals that attack cell membranes.

The results of this study demonstrate that Gongronema latifolium Benth ethanolic leaf extract exhibits a potent histological and hepatoprotective effect against acetaminophen-induced hepatic damage in the male albino rats. This study therefore suggest the possible use of Gongronema latifolium Benth leaf in folk medicine and in preventing some hepatic damage or inflammation.