Patients are the "consumers" of health services and their satisfaction is an essential measure of quality of health care. (1)

Patients’ perceptions of medical care are of increasing importance for administrators as well as clinicians. As regards administrators the main concern with patients’ satisfaction appears to be planning and evaluation of health services and for clinicians patient’s satisfaction is still the main goal of clinical practice. (2)

The main service related factors are: accessibility of care, continuity, humanness, informativeness and thoroughness. Accessibility means the possibility of the patient obtaining the services he needs at time and place where he needs and in sufficient amount and reasonable cost. Continuity of care is the relationship between past and present care in harmony with therapeutic needs of the patient. Humanness is defined as the respect, concern, friendliness, and the amount of courtesy shown by providers to the patient. Informativeness is defined as offering patients proper information and thoroughness is the extent to which patients receive complete care services. (5)

There is no gold standard for measuring patient’s satisfaction. Instruments used to measure patient satisfaction vary widely in design, content and administration. (1)

The present study is an attempt to explore the degree of care- givers’ satisfaction and knowledge after their children received care in IMCI clinics.

This is a Cross sectional descriptive study conducted in Sedi-Bishr family health centre in Alexandria.

Sample of care-givers whose children had received care in IMCI clinics.

b) Unit of observation

For a period of ninety days (1st of January 2013 to 31st March 2013) the researcher attended the IMCI clinic and observed children during their physical examination, after finishing clinical examination the researcher introduced herself to the care givers, explained the purpose of the research and only those who agreed to participate in the study were included.

The total number of participant mothers was 110.

Questionnaire was filled by interviewing the caregivers after finishing the clinic visit. It is composed of four parts:

• Second: assessment of mother’s knowledge after counseling through nine questions and three points scale to assess if the mother properly understood the cause of her child illness, reasons for symptoms from which the child suffered, drugs prescribed and the cause of their prescription. For each question if the mother was not understand the point under question the score was zero), if she was understanding but incompletely the score given was 1) and if she was understanding well the score given was 2).Then mean score of mothers’ knowledge was calculated, estimated to be 16) which was accepted as a cut-off point to evaluate the acceptable degree of mothers’ understanding after finishing clinical visit. Those with score < 16 were considered to have poor knowledge while those with score ≥ 16 considered having good knowledge.

• Third: assessment of mother’s attitude towards the health service given in the IMCI clinic through six questions about her opinion in the communication with the doctor and if she is satisfied by service or not. If she was not satisfied the score given was 0) and if she was satisfied to some degree the score given was 1) and she was well satisfied the score given is 2). Then mean score of mothers’ satisfaction was calculated, estimated to be 10) which was accepted as a cut-off point to evaluate the attitude towards received care those with means satisfaction less than 10 considered to have negative attitude towards the health care received while those with score 10 or more considered to have positive one.

• Fourth: open ended question about the advantages and disadvantages of care.

Data were fed to the computer using Statistical Package for Social Sciences SPSS version 11.5). Tests of Significance were used for study the relation between multiple study variables. Significance of the obtained results was judged at the 5% level.

Table 1. Distribution of mothers according to their education.

The total number of participant mothers was 110. All of them reported that they had visited this family health facility before. About 24% of them were either illiterate or only completed their primary education while nearly one third of mothers (34.5%) had completed their university education (Table 1). The majority of participant mothers were married only 5.5 % were widows and 6.4% were having single parent families due to travelling of husband for working.

Table 2. Distribution of mothers according to their education and knowledge after clinical examination.

After finishing clinical examination each participant mother was asked group of nine questions in order to evaluate her knowledge after receiving care in IMCI clinic. Each mother was asked about the reason of her child illness, its clinical picture and treatment prescribed. Then the mean score of knowledge for all mothers was calculated, which was 16. Mothers with mean knowledge score < 16 considered to have poor knowledge while those with score ≥ 16 considered to have good knowledge.

When mothers’ knowledge was correlated to their education, it was found that mothers with high education had better knowledge than those with low education but this was not statistically significant (Table 2).

All the participant mothers had positive attitude towards the health care they received in the IMCI clinics.

The entire participant mothers had visited the same health facility before and showed the desire to visit the same facility again even all mothers reported that they will advise others to visit IMCI clinics. All of them were satisfied by physicians’ listening and understanding of their children problems.

The most common reported advantages and disadvantages of service in IMCI clinics are shown in figures (1 & 2). 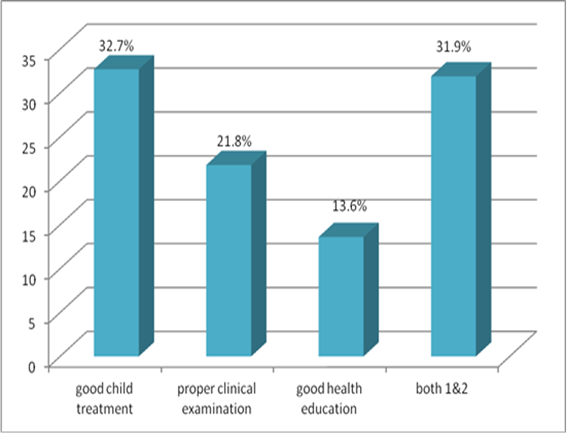 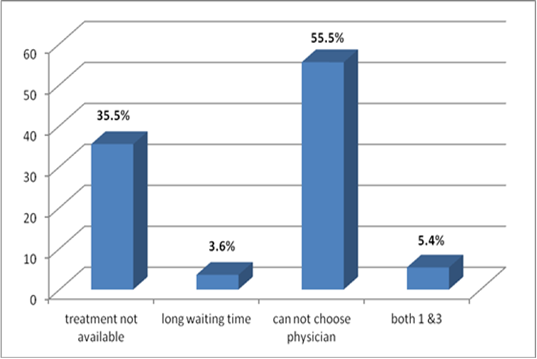 In the present study 69% of mothers had good knowledge about their children illness and when correlated to their education, it was found that mothers with high education (secondary and higher) had better knowledge than those with low education (illiterate, primary and preparatory) but this was not statistically significant. This may be due to the fact that highly educated mothers may have been well oriented even before counseling which was proven by a study done in Indiana University School of Medicine about the effect of counseling on mothers’ knowledge. (6)

Patient satisfaction information can provide a dependent measure of service quality and serves as a predictor of health related behavior. In the present study all the participant mothers were satisfied by health service in IMCI clinics, this comes in agree with the results of the IMCI Health Facility Survey which was done in Egypt during 2002 which revealed that 95.2% of interviewed caretakers were satisfied by service offered in IMCI clinics. (7)

Again in the present study more than half of mothers 54.5%) were mostly satisfied by the good child treatment and the proper clinical examination. This was also reported by the IMCI Health Facility Survey done in 2002 and by another study done in Bangladesh which concluded that 69% of caregivers were satisfied by physicians’ treatment with their children, even mothers reported that the good physicians treatment usually make them tolerate the long waiting time. (8)

Health education is an integral part of health care and good management of sick children.In the present study 13.6% of mothers reported that the main advantage of IMCI clinics was the proper educational message they received especially as regards drugs prescribed. Breast feeding mothers also highlighted the issue of breast feeding counseling and how useful it was which agrees with an article published in journal of tropical pediatrics during 2012 which confirmed the effectiveness of health education in improving children nutrition in developing countries. (9)

As regards drug availability and care givers’ satisfaction, a study done in Egypt during 2003 showed that 26% of mothers were not satisfied because the prescribed medications were not available in the facility and they were obliged to buy them from private pharmacies. (7),this was also the situation in the present study as 35.5% of mothers reported that unavailability of drugs is the main disadvantage of IMCI system.

All participant mothers were generally satisfied with care provided in IMCI clinics however highly educated mothers showed better knowledge about their children illness but that was not statistically significant. Despite being satisfied with the provided care, mothers reported some disadvantages of care; an issue that needs further evaluation in order to maximize the quality of provided care in IMCI clinics.

All authors contributed fully in formatting the research proposal, data collection and analysis, as well as the manuscript editing and submission.