Occupational Injuries in Workers of Steel Plant at Visakhapatnam

Context: Occupational injuries are a public health problem, estimated to kill more than 300,000 workers worldwide every year and to cause many more cases of disability. Workers employed in basic steel factories are at greater risk for non- fatal injuries and illnesses than workers in other general industry jobs. Aims: To examine the role of different factors like age, job duration, education, marital status, stress etc. in the causation of occupational injuries and to see the nature of injuries. Settings and Design: The study was undertaken in the steel plant at Visakhapatnam Methods and Material: This study included 306 permanent workers who attended the emergency medical center during the study period of the first quarter of the year 2012. Data collection was done by personal interviews to obtain the baseline data that included age, year of experience, education, marital status, habit of smoking or alcoholism and stress at work. Of these 306 individuals, occupational injuries at work place were observed in 66 individuals. Further these 66 workers were analyzed for details of the occupational injuries Statistical analysis used: Percentages, chi- square values, p-values and Odd抯 ratio were calculated with the help of SPSS version 17.0. Results: The factors such as age<30 years (OR=1.99), a <5 years job duration (OR=2.33) and stress at work (OR=2.32) were associated with a significantly higher risk of occupational injuries. Conclusions: This study warrants the increased risk of occupational injuries in younger age group, less experienced and at stress workers.

Occupational injuries are a public health problem, estimated to kill more than 300,000 workers worldwide every year and to cause many more cases of disability.1 Occupational accidents / injuries, although definitions vary widely, are those occurring at the place of work. Prevalence of work-related injuries is 35% among all injuries reported in a public sector industry.2 In the agricultural sector, where more than half of the total workforce is employed, the prevalence rate of accidents ranges from 7.8 % to 27.7%, depending upon the type of work performed.3 In 1994, at the global level an average estimated fatal occupational accident rate was found to be fourteen out of one lakh workers.4 Although the profile of the at-risk worker population has changed greatly over the past decade, both quantitatively and qualitatively, the risk of occupational injury still centers on workers of various industries.5

Fatal and non fatal injuries at workplace generate a huge burden on workers their families, as well as the society. Work- related hazards are especially severe in developing countries.6 Developing countries face unique challenges in the control of occupational disease and injury. Unregulated exposures to chemical and physical hazards, work that may begin in childhood, poverty and hunger, and scarce workplace health and safety resources contribute to high incidences of occupational injuries. A low level of commitment to occupational health at the nation level, common in many developing nations, results in a lack of enforcement of standards; this situation also permits the operation and proliferation of hazardous workplaces.7

Table 1. Personal and occupational characteristics of all the workers in the study period.

Workers employed in basic steel factories are at greater risk for non- fatal injuries and illnesses than workers in other general industry jobs. A thorough knowledge of the trends of occupational injuries is essential for development of strategies to prevent these events.8

With this background, the present study was undertaken in the steel plant with the main objectives: To examine the role of different factors like age, job duration, education, marital status, stress etc. in the causation of occupational injuries and to see the nature of injuries.

The study was undertaken in the steel plant at Visakhapatnam of Andhra Pradesh. The steel plant has both permanent and contract basis workers. The study was limited to the permanent workers as they will be constant workers in the steel plant. This study included a total of 306 permanent workers who attended the emergency medical center during the study period of the first quarter of the year 2012. Data collection was done by personal interviews to obtain the baseline data that included age, year of experience, education, marital status, habit of smoking or alcoholism and stress at work. Of these 306 individuals, occupational injuries at work place were observed in 66 individuals. Further these 66 workers were analyzed for details of the occupational injuries. To understand the nature of injury and the consequences of it, and also to facilitate the understanding of the cascade of events leading ultimately to injury, every single injury was analyzed according to the type, the body parts involved and the incident that led to the accident.

Comparison between the personal characteristics of injury with non-injury workers was done to obtain the role of various factors in the causation of occupational injuries. Probability level of less than 0.05 was considered significant.

Age-wise distribution of all the 306 workers showed that around 50.33% of the workers were in the 30-49 years age group, 25.82% of the workers were of age 50 years or more and only 20.59% of the subjects were less than 30 years of age. The mean age of the workers was 43.59.4 years. Work experience of less than five years was noted in 14.71% of the workers, 21.57% workers had an experience of five to ten years whereas 63.73% had more than ten years experience. About 66.01% of the subjects were undergraduates while others were educated up to the postgraduate level. Married workers accounted for 80.06%. Around 38.89% workers were having the habit of smoking / chewing of tobacco-areca nut, whereas 31.37% of the workers had habit of alcohol intake. Forty-six percent workers expressed that they experienced stress. The comparison of these general characteristics of all 306 workers with 66 injury incidences attending the medical center during the study period is presented in Table 1.

Table 2. Distribution of Occupational injuries according to the nature of injury (n=66).

Individual analysis of accidents, according to the type of injuries, showed that tears contributed to the highest number of injuries (40.91%). Sprain-strain and bony injuries comprised 27.27% of all the injuries [Table 2]. When the injuries were analyzed according to the body parts involved in the accidents, it was found that 72.72% of the accidents had affected the limbs (upper limb 30.30% and lower limb 42.42%). Head, neck and face areas were affected in 13.64% of the cases [Table 3]. Around 54.55% of the accidents occurred during night shift i.e. between 10 p.m. to 6 a.m. and remaining 45.45% during morning or afternoon shifts [Table 4]. Handling machine of various kinds was reported by 45(68.18%) of workers with injury whereas remaining 21 (31.82%) of those injured were not handling any machines. The circumstances which led to occupational injuries were: fall of a person in 12 cases, fall of an object in 14, striking against an object in 18, wrong handling of machines in 18 and fire in 4 [Figure 1].

The risk of injury occurrence in relation to different possible factors of its causation is depicted in Table 5. The risk of the factors like age, job duration, educational status, marital status, personal habit, presence of stress etc. was examined. The factors such as age<30 years (OR=1.99), a <5 years job duration (OR=2.33) and stress at work (OR=2.32) were associated with a significantly higher risk of occupational injuries. The risk of occupational injuries was observed to be more in the individuals who were undergraduate (OR=1.24), unmarried (OR=1.11) and smokers (OR=1.21) although statistically not significant. 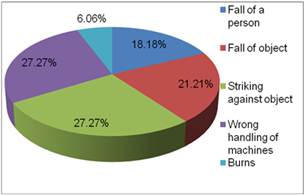 Figure 1. Distribution of Occupational injuries according to circumstances leading to accidents.

Well-documented studies to determine the prevalence rate and pattern of occupational injuries in tile factories are very few at the global level. Literature search revealed only few studies to know the prevalence rate and pattern of injuries / accidents in steel plants in India9 and in other countries.8, 10However some occupational injury related studies are available in other factories.11-13

Occupational injuries accounted for 21.57% of all the patients attending the emergency medical centre at the steel plant during the study period of three months. The average number of injuries in a month was 22. In another study on occupational injuries in steel plant, the average number of accidents was 12.9 This difference may be because the other study included only injuries with more than one day absence from duty whereas the present study considered all the cases of occupational injuries. A study done in a metal smelting industry showed around 28% accidents during a five-year period, from 2000 to 2004.11 Another study in a garment industry showed incidence of accidents during a three-month period to be as little as 2.49/1000 workers.12 The high prevalence of accidents in our study as compared to other factories may be due to lack of awareness regarding circumstances leading to accidents and negligence on part of workers. In addition there is a prompt reporting of every injury to the emergency medical center. Workers in steel plant will be stressed from excess heat, humidity, fumes and dust that often cause a strain, which leads to increase in the number of accidents.

The maximum injuries were in the form of tears. The limbs were involved in majority of injury cases. These observations are in coherence with other studies.8,9,11 A high proportion of superficial injuries were mainly due to stepping / striking against objects, and frequent association with handling of small tools, which is in comparison with another study.10

The record-based, cross-sectional nature and relatively smaller sample size were the limitations of the study. Because of feasibility and time constraint the study was limited to a 3 months period only. Longitudinal studies will be required to further look for an association between various factors associated with accidents. Injuries / accidents in the steel plants are an important occupational health problem in India, in the context of a high prevalence rate of accidents and more involvement of the at-risk worker population in tile factories. Studies from different factories have highlighted the importance of safety measures to prevent accidents in various sectors.15, 16 This study has put forth the role of some high-risk groups such as young age, less-experienced and at stress workers. More vigilance is needed during the night hours of the duties. A special attention to these at risk groups and application of ergonomics can decrease the occurrence of occupational injuries in steel industry.

The authors acknowledge with grateful thanks the Management and the Dean of Maharajah抯 Institute of Medical Sciences, Vizianagaram for their constant encouragement to engage in research work. The authors are thankful to the Visakhapatnam Steel plant, Visakhapatnam authorities for their co-operation in conducting the study. The authors also extend their profound sense of gratitude to the study participants.