Introduction: Primary intraosseous squamous cell carcinoma (PIOSCC) is a rare malignant lesion arising within the jawbones, without initial connection with the oral mucosa. This malignant lesion develops from odontogenic epithelium or odontogenic cysts or tumors. Case Report: In this case report, an intraosseous squamous cell carcinoma arising from an odontogenic cyst in a 60-year-old male patient is presented. Conclusion: This case report demonstrates the importance of clinician’s knowledge of malignant potential of odontogenic cyst and the accurate and timely management and treatment of these lesions.

In this report, we present a case of squamous cell carcinoma arising in a radicular cyst, and demonstrate the clinical, radiological, and histological features of this lesion.

A 60-year-old male was referred to the Isfahan University of Medical Sciences, Faculty of Dentistry, Department of Oral and Maxillofacial surgery on 17 December, 2014 with a chief complaint of mobility of mandibular anterior teeth for two month duration. He had not a past history of tobacco or alcohol use and no traumatic injuries. But, there was a history of increase blood pressure and taking Terazosin. According to the patient statement, there was no sign of pain, sensation disorders, pus discharge, and bleeding in the involved region.

Extra oral examination showed normal, but the bilateral submental and submandibular lymph nodes was palpable, firm, mobile, and mild tender. Examination of the intra oral cavity revealed a mild buccal and lingual cortical expansion between mandibular left canine to mandibular right first premolar with normal overlying mucosa. Furthermore, severe mobility of mandibular right and left central incisors was observed. It should be noted, that our patient had not proper oral hygiene. A few amount of brownish liquid aspiration in a fine needle biopsy.

The panoramic X-ray revealed a well-demarcated, multilacular cyst like radiolucent lesion between the left canine and right second premolar that involved the roots of the neighboring teeth (Figure 1). Furthermore, left and right mandibular lateral and central incisors had root canal therapy, and composite dental restorations. 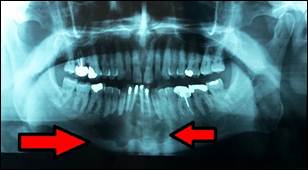 Figure 1. A panoramic X-ray shows a radiolucent lesion with ill-defined borders between the root of left canine and right second premolar.

Surgical removal of the lesion with left and right mandibular central incisors was done under general anesthesia (Figure 2). During the operation, a very aggressive lesion with perforated buccal cortical bone was noted.

Histopathological analysis of the hematoxylin/eosin-stained material showed a cystic lesion with nonkeratinized stratified squamous epithelium lining with different thickness. But, some area of histopathological view, degenerative changes with ballooning cells and in some area dysplastic features were observed. The islands of anaplastic squamous cells with marked nuclear pleomorphism, hyperchromatism and formation of keratin pearls and individual cell keratinizations were seen in connective tissue wall of cystic lesion (Figure 3). 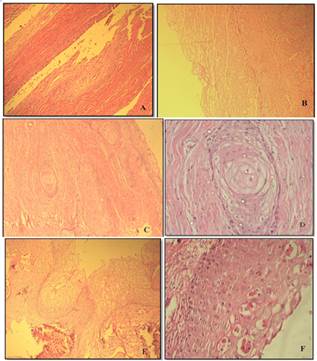 The connective tissue wall of this cyst showed moderate chronic inflammatory infiltrate that chiefly consisted of lymphocytes and plasma cells. Furthermore, in many areas of connective tissue wall observed the basophilic bodies similar foreign bodies that caused foreign body inflammatory reactions. These basophilic bodies may be due to release sealer of root apex in during the root canal therapy. Also, giant cells and clestrol clefts was observed around these (Figure 4).

The patient underwent partial resection of the mandible with 1-cm healthy bone margins. The patient was free from disease at 1 year of follow-up. To date, recurrence or metastasis has not occurred and follow-up visits are continuing.

Only bone that contains epithelial tissue is jaw bones (10). Primary squamous cell carcinoma of the jaw bone is extremely rare with a prevalence of 0.3% to 3%. Most of this neoplasm is arising the epithelial lining of odontogenic cysts (4). Detection of the total number of reported cases of PIOSCC ex radicular cyst is very difficult, due to lack of follow-up and missing there. According to most studies, PIOSCC among the cancers that occur in the mouth is very rare. Gardner’s criteria for diagnosis of primary squamous cell carcinoma in odontogenic cysts including the following: 1) observation to histopathological changes from benign epithelial lining of odontogenic cyst to invasive SCC, 2) absence of dysplastic and carcinomatous changes in overlying oral mucosa, and 3) absence of carcinoma in the adjacent structures (11,12).

The mean age of patients in PIOSCC ex odontogenic cysts is 60.2 years, and occurs in a wide age group, ranging from 1.3 to 90 years. A male predication is noted, that the male/female ratio is 2.2:1. The male predominance for the PIOSCC patients is not specific. But, this result may be reflects the higher prevalence of odontogenic cysts in men (13,14). In this report, a 60-year-old man with PIOSCC arising of radicular cyst was presented, which is similar to the other studies (3,4,14).

In most studies have been showed that the clinical features in affected patients were jaw swelling that in early stage is painless, but in late stage become painful (16). Furthermore, perforation of buccal and /or lingual (or palatal) cortical plate of mandible or maxilla, adherence of the cyst lining to the bony cavity, and chronic sinus tract were common clinical features. According to studies, sensory disturbance in involved area is rare. This finding without a history of trauma is an alarming sign for diagnosis of malignant lesion such as PIOSCC(3,14). In our case, perforation of buccal cortex and mobility of involved teeth were observed, but there was no pain, sensory disturbance and chronic discharging sinus tract in the affected area.

Radiographically, a PIOSCC ex odontogenic cyst usually has a unilocular noncorticated radiolucency with well-defined or ill-defined margins. The odontogenic cyst with jagged or irregular margins that has indistinct borders should be considered as malignant changes. Especially, if in occlusal radiographs show the invasion and destruction by the lesion and erosion of the buccal and lingual plates (3,4,17). In this report, similar radiographic findings were observed by us.

According to more studies, the residual or radicular cyst is the most common cyst associated with PIOSCC (3,4,8). Causes of the malignant transformation of odontogenic cyst lining are not known. But, the main stimulus factor to malignant changes is long term chronic inflammation with or without consideration of genetic cofactors (3,14).

The relation between chronic inflammation and carcinogenesis has been proved, but the exact mechanisms have not been determined (18). However, three main mechanisms in this regard are stated: (1)the formation of reactive oxygen and nitrogen species by phagocytes in chronic inflammation has been observed. Superoxide anion, hydrogen peroxide, and hydroxyl radical are the major species produced by the inflammatory cells, which these products can combine with nitric oxide to from other reactive nitrogen intermediates. These productions have the ability to damage DNA, proteins, cell membrane, and modulate enzyme activities and gene expression, therefore, Can act as carcinogenesis. Furthermore, the chronic inflammations promote apoptosis of normal cells, leading to compensatory proliferation of the remaining cells and increases the tissue stem cells and therefore are subject to DNA mutations and malignant transformation. Furthermore, in chronic inflammation responses produced cytokines that increase the growth of transformed cells. On the other hand, according to some studies expression of enzyme cyclooxygenase-2 causes the production of prostaglandins, leading to malignant changes (19). (2) Directly malignant transformation by inserting active oncogens in to the host genome, inhibiting tumor suppressor genes and stimulating mitosis have been observed in chronic inflammation. (3) Chronic inflammation may induce immunosuppression with reduced immunosurveillance (20).

According to studies, metastasis of PIOSCC is rare, but is an important prognostic factor and survival rate (5,14). The prognosis of PIOSCC ex odontogenic cyst is better than PIOSCC de novo (3). In our study, the patient has not lymph nodes metastasis.

The best treatment method for PIOSCC determined by the extent of the carcinoma. In the patients with carcinoma in situ or located intramural within the cyst, surgical removal is the choice treatment and the patient should be follow up. Additional therapy such as bone resection, radiotherapy, and chemotherapy even neck dissection should be planned in the patients with positive margins of the tumor and involved surrounding bone (14,21).

This tumor is very rare. The diagnosis of this neoplasm have been done by pathologic evaluation after cyst enucleation. This topic have been clear the importance of careful examination of the clinical, radiographical and histopathological features. We present the unusual case of PIOSCC ex radicular cyst without  pain or sensation disorder and pus discharge. Furthermore, foreign body reaction associated with dysplastic epithelial of cystic wall would confuse the pathologist for best diagnosis.

The PIOSCC arising the odontogenic cyst is associated mainly with the residual/radicular cyst. Long standing chronic inflammation might be an important factor in the etiopathogenesis of PIOSCC ex odontogenic cyst, Therefore, because reduce the rate of malignant transformation of benign odontogenic cysts, the accurate and timely management and treatment of these lesions should be suggested.