"Policy is meant for Growth and not for Impairment"

The recent Economic Crisis which was also called as "Sub Prime Crisis" or "Global Financial Crisis" has started way back at the end 2007. It was first started as "Sub Prime Crisis" in U.S.A. later spread all over the world as Global Financial Crisis". The Global Crisis plays a vital role in the modern economics; which not only explained the importance of the policy framework in an economy, but, also showed us how far an economy potent to face or withstand a crisis. In this paper we are going to see what is mean by Sub Prime Crisis, how it started, its impacts on BRIC economics, Impact of crisis on the Indian Economy and Lessons to be learned. Any economy needs an appropriate Monetary Policy to withstand any financial turmoil. This paper ends with a concluding remark that Policy is meant for Growth and not for Impairment".

Contents
1. Introduction 2. What is Sub Prime Crisis 3. How the Crisis Started 4. Impact on BRIC Economies 5. Impact on India 6. India’s Approach/ Response over the Crisis 7. Lessons from the Crisis 8. Conclusion

The recent Economic Crisis which was also called as "Sub Prime Crisis" or "Global Financial Crisis" has started way back at the end 2007. It was first started as "Sub Prime Crisis" in U.S.A. later spread all over the world as Global Financial Crisis". The Global Crisis plays a vital role in the modern economics; which not only explained the importance of the policy framework in an economy, but, also showed us how far an economy potent to face or withstand a crisis.

The subprime crisis is nothing but the bursting of Technical Bubble (famously known as Dot Com bubble) which occurred in the early part of the decade. The Fed lowered the interest rate due to Technical Bubble in order to ward off recession. They also encouraged, debt induced consumption and mortgage financed housing boom.

In this paper we are going to see what is mean by Sub Prime Crisis, how it started, its impact on BRIC economies, it impacts of crisis on the Indian Economy and lesson to be learnt from the crisis. This paper ends with a concluding remark.

2. What is Sub Prime Crisis

As the word suggest sub prime means which not prime or crucial. As the name suggest that lending to subprime borrowers i.e. lending to borrowers with low or poor credit worthiness. The Sub Prime Lending evolved with the insight of a demand in the marketplace for loans to high-risk borrowers with deficient credit. The first sub prime was initiated in 1994.

3. How the Crisis Started

The Financial crisis began with the bursting of the housing bubble in the United States of America. Due to high default rates on Subprime and other Adjustable Rate Mortgages (ARM) made to higher-risk borrowers who are with lower income (or lesser credit worthy than the prime borrowers). Loan incentives and a long-term trend of rising housing prices encouraged borrowers to undertake mortgages. Considering they would be able to refinance or repay at favorable terms in future. Unfortunately, the housing prices started to drop reasonably in 2006-2007 (in many parts of the U.S.A.) which made the refinancing more difficult. During 2007, nearly 1.3 million U.S. housing properties were subject to foreclosure activity, up 79% versus 2006. As of December 22, 2007, a leading business periodical estimated subprime defaults would reach a level between U.S. $200-300 billion.

The Sub Prime lending is the major cause for the Crisis. Sub Prime Lending evolved with the realization of a demand in the marketplace for loans to high-risk borrowers with imperfect credit. Many companies entered the market when the prime interest rate was low, and real interest became negative allowing modest sub prime rates to flourish. Subprime crisis, which began in the United States, has become financial dirt which led to restriction on the availability of credit in the world financial markets. This resulted by a fall in the U.S. housing prices, a rise in mortgage failures and foreclosures, and severe disruption in the shadow banking system. Hundreds of thousands of borrowers have been forced to default and several major sub prime lenders have filed for bankruptcy.

The following Diagram shows the Low Real Interest Rates from 2000-2009 which is also one of the primary causes for Sub-Prime Crisis. The Federal Reserve (normally known as Fed) had a view that Markets will take care of themselves which lead to price instability and thus became difficult to identify the bubbles. Fed was not clear on how effective it would be if it raises the interest rates to curtail or to withstand bubble. They felt that Interest Rate may not be effective and which lead to decrease in interest rate after some point and reached almost zero. The Biggest mistake done by the Federal Reserve is that they did not remain vigilant about the market condition and did not keep their policy on tantrum.

In 2001, the short term interest rates were drastically cut from 6.5 to 1 percent by the Federal Reserve Board. Then the Federal Reserve Governor Greenspan had admitted in 2007 that the housing bubble was "fundamentally engendered by the decline in real long-term interest rates." The interest rates were raised 17 times between 2004 and 2006; it wen from 1 percent to 5.25 percent. The Fed stopped raising rates because of fears that an accelerating downturn in the housing market could undermine the overall economy. 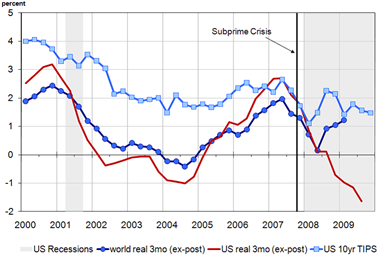 One of the important factors for the Sub-Prime Crisis is the U.S. Debt Instruments. The so called financial innovation - Credit Derivatives, also played an important role for this sub prime crisis. It moved from Originate and Hold Model to Originate and Distribute Model, Which further, lead to developments of innovation to many Structured Instruments like Collateralized Debt Obligation (CDO), Credit Default Swaps (CDS). Warren Buffet called derivatives as "Financial Weapons of Mass Destruction"1 in his letter to stockholders.

Before the Crisis spread across the globe many economist where talking about so called "Decoupling Theory". According to this theory, the emerging economies (esp. BRIC economies) will broaden and deepened enough, so that they may not be affected from US recession. But the fact is up to certain degree this is true; when we see overall this theory failed its validity test. The emerging economies may not be affected fully but to certain extent they were also affected due to Sub Prime Crisis in U.S.

No Doubt BRIC economies were having a highest growth rate till financial crisis hit the world economy. In fact, the growth rate ranged from a moderate of 6 per cent to a high of 13 per cent till 2008.

From the above table it evident that the Growth rate of BRIC nations had started seeing its decline from 2008. When it comes to BRIC there are structural differences between four economies. There was a vast difference of financial integration between BRIC economies. Brazil and Russia was highly integrated whereas two Asian giants India and China were not much integrated. That’s one of the reasons why both the countries are not much affected due to crisis whereas rest two economies (i.e. Brazil and Russia) are severely affected.

Even though, India is not affected fully due to Financial Crisis, it is affected to certain level. There was reduction in capital flows which was reflected in Balance of Payments (BoP). Due to reduction in capital flow there was some pressure in BoP. This was reflected in Stock market and finally it had an impact on monetary and liquidity of the economy.

From the above table we can clearly see that there was a decline in Total capital flows in the country from 82% to 15.3% (net values). During the Same period our FII (net) went to negative level which reflects our Stock Market position2. The current account balance went to negative (-15.5) for the first time after a decade (last time it went to -5.4 in 1995-96 around 1.7% of GDP).

Even though we have more domestic demand, our trade across the globe has spread wide over after liberalisation. The role of trade in refining the growth process in India is being considered to be more important so that we can have more inclusive and faster growth. India’s Service Sector plays an important role in global integration came after liberalisation. This facilitated cross-border delivery of services across the globe.

6. India’s Approach/ Response over the Crisis

India had opened up its current account fully but gradually. India has opted for more standardised approach opening up of full capital convertibility. India encouraged equity capital flows at one end and had a ceiling as well as restriction for debt flows. It made a progressive liberalisation for capital outflows.

Deepak Mohanty, Executive Director, Reserve Bank of India in his speech which he delivered at the 3rd ICRIER-InWEnt Annual Conference on 12th November, 2009 at New Delhi has explained a few points of how did Monetary Policy in India Respond to the Global Financial Crisis? The excerpts of the same is given below.

He also points out some key differences between the actions taken by the Reserve Bank of India and the central banks in many advanced countries:

First, in the process of liquidity injection the counter-parties involved were banks; even liquidity measures for mutual funds, NBFCs and housing finance companies were largely channeled through the banks.

Second, there was no dilution of collateral standards which were largely government securities, unlike the mortgage securities and commercial papers in the advanced economies.

Third, despite large liquidity injection, the Reserve Bank’s balance sheet did not show unusual increase, unlike global trend, because of release of earlier sterilised liquidity.

Finally, the experience in the use of procyclical provisioning norms and counter-cyclical regulations ahead of the global crisis helped enhance financial stability.

Despite of the impact of crisis by synchronizing exchange rate management and non-disruptive internal debt management the Reserve Bank of India have ensured that appropriate liquidity was maintained in the system with maintaining its prime objective of price and financial stability.

7. Lessons from the Crisis

What are the lessons we can learn from this crisis. There are many lessons we can learn through this crisis. a) A bank should always have a watch on subprime borrowers; rather it should not lend money to the subprime borrowers. b) A central bank being a monitoring body of an economy should be more vigilant and should take necessary policy actions whenever the economy demands. The policy action should be taken at appropriate time and should be implemented as soon as possible so that an economy may be saved from the crisis. The Central Bank should act efficiently over any bubble without more ado. c) The Central Bank should maintain an enough capital buffer stock, so that it can withstand or be without any crisis. d) An economy’s central bank should also manage the capital flow in the economy so that there is no rash volatility of capital flow. These are the important lesson which we learn from the crisis.