Trend of Healthcare Expenditures in Bangladesh over Last Decades

Bangladesh has achieved many notable improvements in economic, social and health development over the past decades such as reducing poverty, improving life expectancy, maternal health, fertility control, child mortality. Through, improving health indicators, healthcare expenditures also comprise a great share of government budget and became a key issues that dominates health policy and its indicators [1-2]. The total healthcare expenditure includes spending by both public and private sources like medical goods and services, prevention programs, and administration [3]. The public healthcare expenditures are usually financed through social security contributions, various forms of taxation to various branches of government and from external sources [4]. On the contrary, the private healthcare expenditures encompass private insurance premiums and prepaid schemes, mandated enterprise health expenditure, expenditure on health through non-profit health services and direct of pocket expenditure on health goods, which includes co-payments as well as direct payments by uninsured individuals [5]. A previous study found that adequate and efficient healthcare spending widely considered as expected in the improvement of health status [6-7]. However, it was already proven that the demand for healthcare services was a leading factor to increase in healthcare expenditure in many countries. An earlier studies conducted using panel data found that government healthcare expenditure followed different paths and its growth was different in developing countries at different levels of economic development [8-9]. The purpose of the study was, therefore, three-fold, first was to investigate the trend of determinants of healthcare spending after controlling for country-specific economic conditions. Secondly, a differential analysis of public and private health care spending was performed. Thirdly, find out the interrelationship among the determinants of health care expenditure.

Table 1. The Results of Descriptive Statistics. 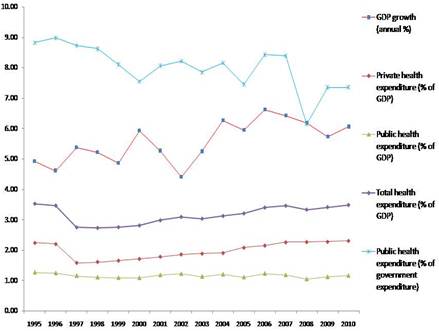 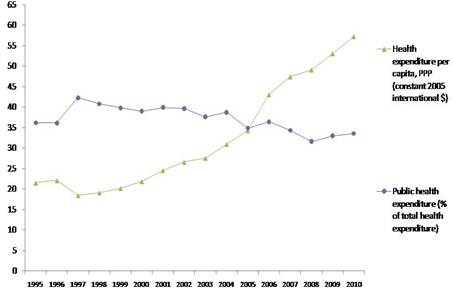 Table 3. The results of the t-test for the public and private healthcare expenditure as a share of GDP.

NOTE: * denoted at 5 % level of significance

Table 4. The Result of the correlation matrix among the determinant of health expenditures in Bangladesh.

In general, private healthcare expenditure was increased because the private sectors made informed choices about the type of services they wish to purchase. In making this choice, they purchased private health services either directly or indirectly via private health insurance[11]. Another observation was that private healthcare expenditure increased in response to a shortfall of public funding for a given level of demand or need in the community. The longer waiting time for some services may force people to skip queues by purchasing services either directly or indirectly through private health insurance. Different private funding mechanisms might also be explained by a belief held by decision-makers that a move to allocate health resources by user charges and privatization may effectively control demand, prices and the supply of services. Although the average percentage of household income devoted to private expenditure on health increased over the period of time in Bangladesh, there was no regressive change in the payments. This indicated that the policies might work initially to minimize the impact of these payments on low-income households. Attempts to change the outline of private healthcare expenditure to low-income households requires a review of society’s commitment to both health, age, sex and income equity [12]. Progress towards the achievement of both was most likely to be accomplished through macroeconomic growth and stability. The findings of the study are expected to be used for providing and developing health facilities and improving health system operations specially in public health expenditure. This was similar with findings of other studies that healthcare expenditure is an important determinant of health outcomes both at the individual and national levels [13-14]. It should  be noted that the findings of the current study can provides evidence in support of increasing health care expenditure, which may only be a necessity but not sufficient condition for achieving progress in terms of population health which may depend on the effective and efficient allocation of such resources.

One limitation of this study was the selection of specific variables of interest where most of the healthcare expenditure determinants for Bangladesh did not have enough time series observation which would have improved a panel data study. Published data were not available on some of the key variables of interests that may affect healthcare expenditure determinants.

The study found that the private healthcare expenditure in Bangladesh is increasing although the public healthcare expenditure still declining over the same period. Establishment of effective public-private partnerships in developing health sector can help the policymakers to make long term decisions to improve population health status.

icddr,b is thankful to the Governments of Australia, Bangladesh, Canada, Sweden and the UK for providing core/unrestricted support. The authors would also like to the thank health economics and financing research groups for their comments on an earlier draft of the manuscript.