In this study, an evaluation of the wind resource for over 18 months was done to assess the potential of wind power as a power source in village of Dehak in south east of Iran. The Weibull distribution was used to model the wind data at three heights of 10m, 30m and 40m. Different wind characteristics such as monthly and diurnal wind speed profiles at different heights, wind direction and turbulence intensity were estimated and analyzed. As a result, the Weibull distribution indicated a good agreement with the data obtained from the actual measurements. Although the results revealed that the understudied site doesn't have a sufficient wind energy potential to develop a wind power plant, small and micro-wind turbines still could be used to electrify that remote village. Therefore, an extensive economic feasibility study of installing small wind turbines for sustainable development of the village can be considered in next studies.

The increasing demand of energy, the growing environmental concerns and rapidly depleting reserves of fossil fuels have made researchers and planners to find cleaner fuel resources to replace fossil fuels. Wind power as an affordable alternative to fossil fuels, is plentiful, renewable, widely distributed, clean, produces no greenhouse gas emissions during operation, and uses little land. Because of its cleanness, wind power is sought wherever possible for conversion to electricity with the hope that air pollution will be reduced as a result of less fossil fuel burning.

The energy of wind has been exploited for thousands of years. The oldest applications of wind energy include extracting water from wells, making flour out of grain and other agricultural applications. In recent years, the use of wind energy has primarily evolved to electricity generation. The field of wind energy blossomed in 1970s after the oil crisis, with a large infusion of research money in the United States, Denmark, and Germany to find alternative sources of energy. By the early 1980s, most incentives for alternative sources of energy vanished in the United States and, therefore, the wind energy utilization shrank significantly. The investments have continued in Europe and made Europe leading in terms of wind technology and wind power capacity installations [1].

In 2011, among 98 countries which use wind energy, Iran was ranked 43th. Iran’s position in 2012 was increased to 47th [2]. This means that although Iran has a favorable wind resource, the use of wind energy in this country is too limited. Although there are several companies attempting to establish wind power plants in different districts in Iran, it cannot be said that the work in this field is satisfactory. Much more is needed to be done to increase interest in this subject.

Wind resource quality is the most obvious factor to concentrate on when choosing a wind turbine location. The wind characterization in terms of speed, direction and wind power is the first step to obtain the initial feasibility of generating electricity from wind power through a wind farm, in a given region [3-7]. In Iran, some relevant works have been developed in this aim. Nedaei [1] presented a study of wind resource assessment in two locations in Hormozgan province in Iran; Jask city and Kish island. The results showed that both two sites are not appropriate place for construction of large-scale wind power plants but it was found that Kish island seems to be suitable for employment of off-grid electrical and mechanical wind driven systems. Nedaei [3] studied the potential of wind power in Abadan airport in south-west of Iran. It was revealed that Abadan region has a good potential of wind power for development of large wind turbines at heights of more than 80 m. Alamdari et. al. [8] analyzed wind speed data for 68 sites during one year at different heights in Iran. GIS themes of wind potential were also used in this study. Mostafaeipour et. al. [9] carried out a study about wind energy potential assessment in the city of Shahrbabak in Iran. The mean wind speed data of three-hour interval long term period from 1997 to 2005 was adopted and analyzed. It was found that the city is not an appropriate place for construction of a large scale wind power plant but it might be suitable for employment of off-grid electrical and mechanical wind driven generators. An economic evaluation was done in order to show feasibility of installing small wind turbines. Rahimzadeh et. al. [10] carried out a research about statistical study of 3 hourly wind data in Esfehan province based on Weibull distribution function. It was suggested that wind energy might be explored in Esfehan province by employing modern wind turbines that require lower start-up wind speeds. Mostafaeipour [11] analyzed wind speed data over a period of almost 13 years between 1992 and 2005 from 11 stations in Yazd province in Iran, to assess the wind power potential at these sites. The results showed that most of the stations have annual average wind speed of less than 4.5 m/s which is considered as unacceptable for installation of the large wind turbines. Mirhosseini et. al. [12] assessed the wind energy potential at five towns in province of Semnan in Iran using Weibull model. They used the power law for extrapolation of 10 m data to determine the wind data at heights of 30 m and 40 m. Keyhani et. al. [13] analyzed three-hour period measured wind speed data of eleven years for the capital city of Iran, Tehran at height of 10 m based on the Weibull model. Their study showed that, the studied site was not suitable for installing large-scale wind turbines.

In this paper, the meteorological data of Dehak region which is located in Sistan and Baluchistan province in south east of Iran was processed to assess the regional wind power potential.

Statistical analysis can be used to determine the wind energy potential of a given site and estimate the wind energy output at the site. To describe the Statistical distribution of wind speed, various probability functions can be suitable for wind regimes. Weibull distribution function is the best one thanks to its high accuracy level [1]. This function has the advantage of making it possible to quickly determine the average of annual production of a given wind turbine. The density function of wind speed probability can be calculated as Eq.1 [1]:

Where f (v) is the probability of observing wind speed v, c is the Weibull scale parameter and k is the dimensionless Weibull shape parameter. The Weibull parameters k and c, characterize the wind potential of the understudied region. Basically, the scale parameter, c, indicates how ‘windy’ the site is, whereas the shape parameter, k, indicates how peaked the wind distribution is (i.e. if the wind speeds tend to be very close to a certain value, the distribution will have a high k value and is very peaked) [1].

Wind power density (WPD) is a better indication of a site's wind energy potential compared to wind speed alone. Its value combines the effect of a site's wind speed distribution and its dependence on the air density and wind speed. WPD is defined as the wind power available per unit area swept by the turbine blades and is given by the Eq.2 [2]:

Where n is number of records in the averaging interval, ρ is air density, vi3 is cube of the ith wind speed value [2]. Besides, calculation of wind power density based on the wind speed provided by field measurements can be developed by Weibull distribution analysis using the following form [2]:

Wind turbulence is the rapid disturbance or irregularities in the wind speed, direction, and vertical component. It is an important characteristic of the site, because high turbulence levels may decrease the power output and cause an extreme loading on the wind turbine components. The most common indicator of turbulence for siting purposes is the standard deviation (σ) of wind speed. Normalizing the value with the mean wind speed gives the turbulence intensity (TI) and can be calculated by Eq. 5 [3]:

Where σ is standard deviation of the wind speed, U is the mean wind speed [3]. 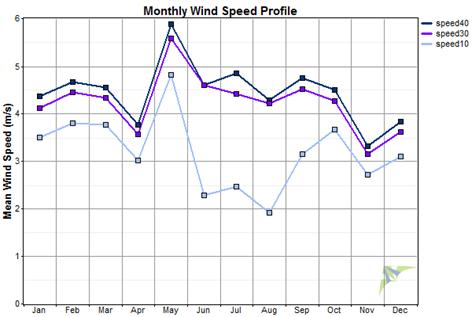 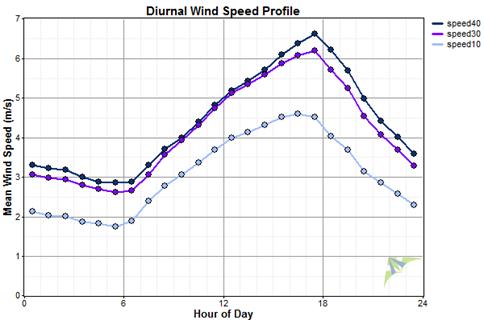 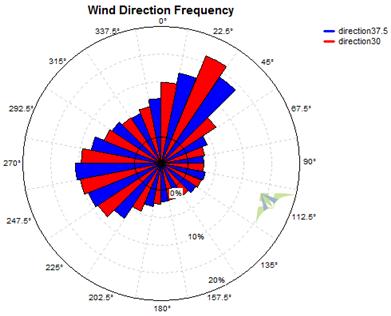 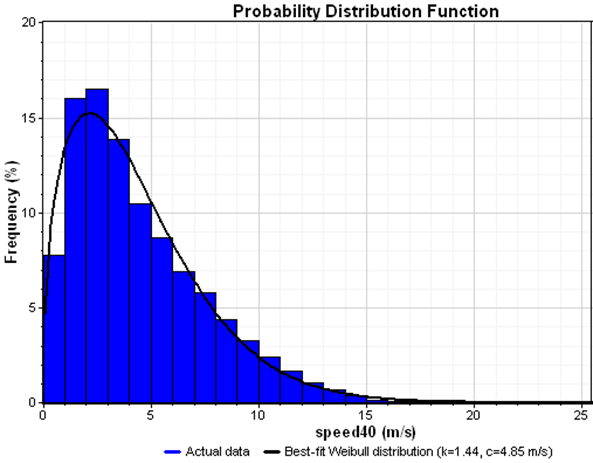 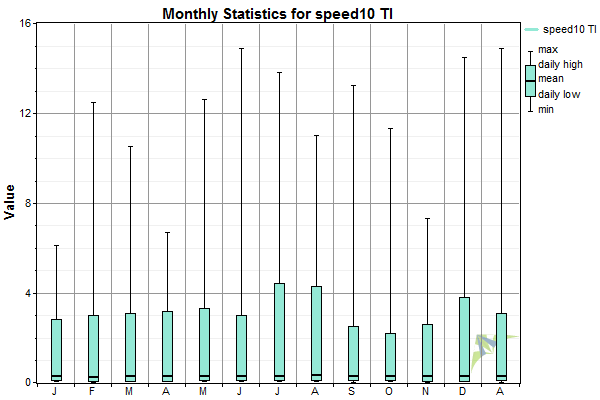 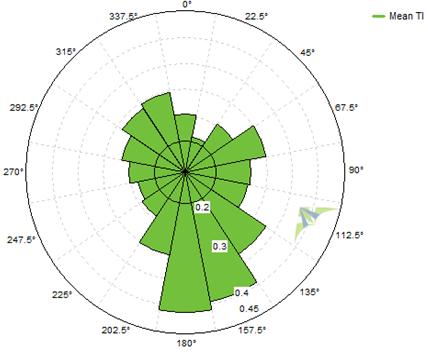 Fig. 6. Polar diagram of turbulence intensity at the height of 30 m. 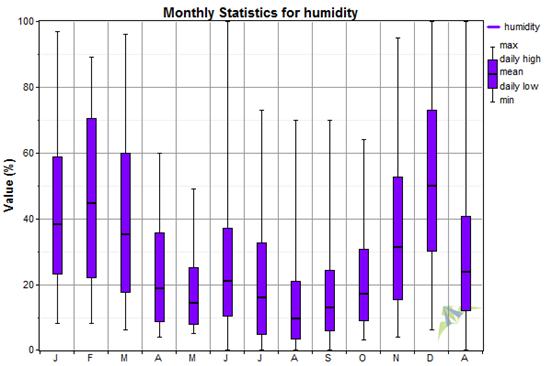 The wind speed frequency distributions at the heights of 10 m, 30 m and 40 m were estimated using Weibull probability function. the Weibull distribution, at the height of 40 m, fits to the actual distribution data well. The values of the shape (k) and scale (c) coefficients in the Weibull function were calculated and presented in Fig. 4.

One of the most important parameters for wind resource assessment is the turbulence intensity (TI). TI quantifies how much the wind varies typically within 10 minutes. Because the fatigue loads of some components in a wind turbine are mainly caused by turbulence, the knowledge of the site抯 turbulence is very crucial [1]. To achieve the aim, the diagram of annual TI for each month is plotted in Fig.5. As seen in Fig, 5, in the last part of the diagram which is denoted by "A", the annual values of TI are given. The maximum values of TI, which are more than 12 at the height of 40 m, occurred in Feb., Mar., Jun., July, Sep. and Dec. The maximum value of TI in all over the year was observed in Jun. with value of almost 15 which is relatively high. In general, it can be concluded that the high values of TI at the height of 40 m can be a negative factor for choosing the Dehak region as a suitable place for development of wind farms. High TI values (more than 10) can cause severe fatigue loads in the wind turbines [3].

Fig. 6 shows the polar diagram of TI at the height of 30 m. This graph is useful to determine the direction of the wind which has the highest wind TI. As seen in Fig.6, the direction sector of 180 ̊ has the maximum TI among all other directions. It can also be inferred from this figure that the prevailing wind TI is mostly from south and south east.

The diagram of the monthly average humidity is shown in Fig. 7. As seen in Fig.7, the monthly mean values of humidity in the understudied site are ranged from minimum of 10% in August to maximum of 50% in December.

The last diagram is the monthly mean values of temperature in the understudied site with the maximum and minimum values. As seen in Fig.8, the temperature varies from a minimum of 0 ̊ C to maximum of almost 43 ̊ C in July. 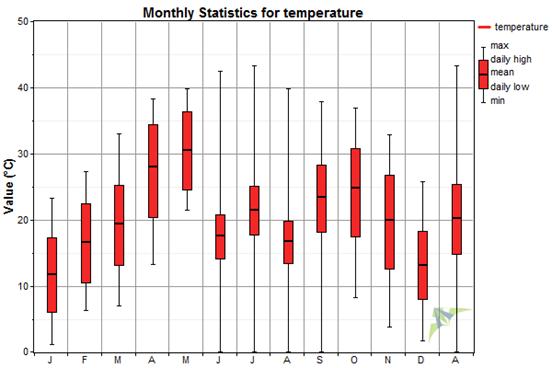 Fig. 8. The temperature variation in the understudied site.

In this study, the wind data at different heights in the time interval of 10 minutes was analyzed to determine the wind power potential in Dehak region in Iran based on Weibull probability distribution function. The most important points are as follows;

1. The Weibull distribution presented in this paper indicates a good agreement with the data obtained from actual measurements.

3. The wind rose analysis showed that, the prevailing wind directions are from west and northeast.

5. Eighteen month study of wind data in Dehak region has showed that at the height of 10m the wind powe potential is poor but at the heights of 30 and 40 m the wind potential is marginal. In general, it can be concluded that the understudied site doesn't have sufficient wind power potential for development of commercial wind turbines. The understudied site may be suitable for development of small and micro-wind turbines. Therefore, an extensive economic feasibility study of installing small wind turbines for sustainable development of the village should be considered in next studies.