The paper proposes an economic feasibility study of integral mounted solar charging and external solar charging station for an electric rickshaw which is an already developed and marketable product in metropolitan cities of India. The project reveal that the integral mount solar PV charging system is financially feasible for a place like Delhi and it can be adopted immediately for gaining benefit of extra range and added ridership. The high return on investment and small payback period make this system a highly lucrative option for the consume The off grid charging method is having a long payback period and thus should only be adopted for places where grid reliability is very low and thus it can act as a good backup system for the running of domestic appliances as well as the EV.

Today electric vehicle are being used for last mile connectivity as a means of public transportation in many metropolitan cities in India. Electric vehicle used for our study is an electric rickshaw which is powered by a small 850 W brush less direct current controlled by an electronic controller. The energy to run these vehicles is taken from the grid to charge the batteries which are generally a series of valve regulated lead acid gel batteries or lead acid batteries of 90 Ah capacities.

At present, India is highly dependent on nonrenewable resources for its energy requirements. Thus, the electric vehicles would not entirely benefit until and unless they use renewable source of energy to power the battery bank. It is very clear that relying on nonrenewable sources of energy like crude oil is not only hampering our health (DPCC, 2014) and our environment but also causing a huge dent on our economy (Ministry of Statistics and Programme Implimentation, 2013).

Electric vehicle (EV) used in the project is an electric rickshaw, used for short distances up to 5-15 kms which help in connecting interiors of the city with nearest metro-station and bus stands. It is a battery operated vehicle which uses a brushless direct current motor (BLDC) which is controlled by a controller of 35 Amp rating. Battery used to run these rickshaws are either sealed valve regulated lead acid (VRLA)sw batteries of 90 Ah rating or 90 Ah lead acid (LA) batteries. The rickshaw has the following main component –brushless DC motor of 850 W capacity, motor controller of rating 35 A, four 90 Ah VRLA gel batteries connected in series, a throttle controller, a reverse and forward switching switch and accessories like indicator bulbs etc. The Figure 2 show an assembled EV which is used for testing purpose in our project having all these components.

A solar EV with integrated solar modules has an addition of following components- four 100Wp polycrystalline Su-Kam make solar modules, 20 amps phase width modulation (PWM) based charge controller with reverse polarity protection, suitable wire according to Imax rating of the module, framing of module with ½ inch hollow square bar rods the assembled view of a solar electric vehicle having all the mentioned components.

These integrated modules are expected to provide increased range to the electric vehicle and more reliability for running on long routes. They also provide an additional benefit of DC to DC charging of batteries while the vehicle is on run or waiting in parking. 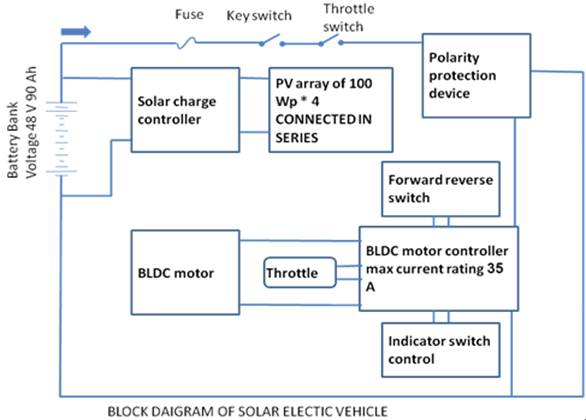 Solar energy is available for free to us, but the technology to harness it to power our devices is expensive. Solar photovoltaic is one such technology which harnesses the energy present in the photons of the sun rays directly into DC current which is generally being stored into the battery bank after passing through a charge controller. The electrical power generated by these solar PV modules is used to run electric vehicles. In the study, solar PV modules are being used to power the electric rickshaw due to some innate advantages of solar energy over other sources of renewable energy. They are easier to install and are safe to use as compared to other sources of energy, they are less bulky and don’t have any mechanical movement as in case of wind energy. Once these are installed the there is no recurring cost to it and just have to be cleaned and annual checked by an engineer. Usually it comes with a warranty period of 25 years so risk factor into investing in them is minimal. Polycrystalline modules are available for different sizes and rating in the market for installation. The major areas of concern are; the area available at the site of installation and weight of these modules, mounting structure and other components used, loss in efficiency due to system component loss, wiring loss, dirt loss and shading. Thus, before installing solar PV system site inspection needs to be done thoroughly to identify best possible site and system configuration. an array of solar modules which is connected to off grid inverter of 1KVA capacity.

The mounting structure of solar modules needs to be made perfectly to withstand the wind loading and spacing is provided between solar panels to reduce wind pressure. The life of mounting structure should be at least 10 years and an annual inspection of the system needs to be done to check the strength of the modules. The solar PV system can be categories into following types for our project

b). Off grid with grid option alternating current unit with battery bank for solar charging station

On grid type generally doesn’t has a battery bank and are used to directly feed the power generated into the grid. Off grid type are customized to be used at places where grid is present but are mainly characterized by having a separate battery bank for powering the load for situation when power in the grid is absent.

While designing the structure should be inclined at the latitude angle of the site and should face south direction for gaining maximum sun time. Shading at site should be inspected for all times of the day and all days of the year by using solar pathfinder or solmetric suneye which are devices which helps in identifying sun path and thus possible shading in different seasons and location at another time frame.

The charging of the electric vehicle has been done by adopting three different approaches which are to be adopted by the consumer depending on the site/ area location. 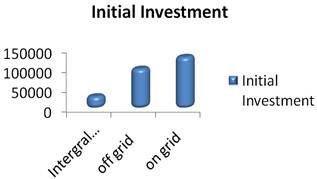 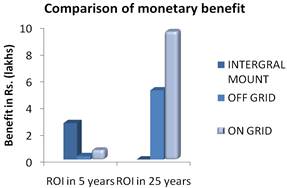 The project reveal that the integral mount solar PV charging system is financially feasible for a place like Delhi and it can be adopted immediately for gaining benefit of extra range and added ridership. The high return on investment and small payback period make this system a highly lucrative option for the consume The off grid charging method is having a long payback period and thus should only be adopted for places where grid reliability is very low and thus it can act as a good backup system for the running of domestic appliances as well as the EV. On grid charging method can be used as a cost saving method due to the shorter payback period and high returns but as a limitation of only being viable for place with high grid reliability. The time frame of the analysis is too short a time to come to a conclusion with precision thus if data is analyzed for a longer period of time then more accuracy can be given to calculations and better forecast can be done.