In this work, an effective way of producing usable amount of electric power from waste heat of conventional kitchen stoves is presented. Here, thermocouple is used for conversion of waste heat into electrical energy which is then amplified, rectified and stored as charge in a rechargeable DC battery. This power can be used later to drive compatible small loads. The method presented here gives a comprehensive idea and necessary conversion circuits to be used for producing electricity from stove heat. The produced power can be used to charge mobile phone or to drive LED bulbs or low power DC appliances using suitable conversion plugs. Bangladesh, a small country of Southeast Asia with population more than 160 million is taken as an example for calculation purpose. The estimated amount of power that can be generated from all the gas stoves in the country is not negligible and can save a significant amount of power. The proposed idea gives a new source of green energy and can contribute in global search for renewable energy.

In recent years, an increasing concern of environmental issues of emissions, in particular global warming and the limitations of energy resources has resulted in extensive research into novel technologies of generating electrical power. Thermoelectric power generators have emerged as a promising alternative green technology due to their distinct advantages [1,2]. Thermoelectric power generation offer a potential application in the direct conversion of waste-heat energy into electrical power where it is unnecessary to consider the cost of the thermal energy input. The application of this alternative green technology in converting waste-heat energy directly into electrical power can also improve the overall efficiencies of energy conversion systems. We can apply this technology in our kitchen to drive small power loads [3,4].

In Bangladesh, gas stove is typically used in every kitchen in urban and sub urban area. If the fire heat of gas stove can be converted into electrical power which can drive small loads in the kitchen, then cumulatively a large amount of power can be saved as the fire heat would be lost otherwise.

Producing Power from thermocouple is not a new idea. Many scientists are working on this idea for many years. Thermoelectric technology has been in wide spread commercial and industrial use for over 50 years yet the true value of thermoelectricity has been seriously underestimated resulting in almost no advancements in the technology. Although this state of affairs is not all that surprising if you consider that energy costs have been very low the same time frame. Thermo power production basically subjected to the coal, bio mass, oil or natural gas, and in traditional ways using wood. Since the starting era of the space programs, nuclear energy is also introduced for thermal power production for providing the electric power to the space craft. Replacing thermocouples by free-piston sterling engines, NASA plans to raise the efficiency to 30% and thus reduce both the mass and the very high cost of the plutonium heat source.

An alternative way of thermoelectric generation of power is using thermocouple. A thermocouple is a temperature-measuring device consisting of two dissimilar conductors that contact each other at one or more spots. It produces a voltage when the temperature of one of the spots differs from the reference temperature at other parts of the circuit. Thermocouples are a widely used type of temperature sensor for measurement and control, and can also convert a temperature gradient into electricity. Any junction of dissimilar metals will produce an electric potential related to temperature. Type K thermocouple (chromel {90% nickel and 10% chromium}–alumel {95% nickel, 2% manganese, 2% aluminium and 1% silicon}) is the most common and inexpensive general purpose thermocouple with a sensitivity of approximately 41 µV/°C (Chromel positive relative to Alumel when the junction temperature is higher than the reference temperature) [5].

Thermoelectric Power Generation (TEG) devices typically use special semiconductor materials which are optimized for the Seebeck effect. The emergence of thermoelectric generators as a viable alternative for the production of electricity is because of the relatively low energy conversion efficiency, which is only about 5% to 7% whereas photovoltaic (PV) are now in excess of 40% [6].

Aggarwal et al. [7] developed a model to show how the thermal electricity using thermocouple can be produced by harnessing the solar and geothermal energy. They converted solar energy into the electricity using the thermocouple with efficiency from 6-8%. In proposed thermocouple generator of Aggarwal et al., source part is subjected to collect the energy from sun in the form of heat. The concept of collection of heat based upon the simple phenomena of increase in the wavelength of the falling radiation after refraction through a transparent glass sheet. Glass is transparent to wave of visible light but opaque to ultraviolet and infrared waves. Glass acts as valve of one way short, it allows the visible light to enter but prevent the longer wavelength to leave. One Thermocouple is sandwich between the solar heat trapping using greenhouse and a simple heat sink, which is made of thin aluminium sheets. The bottom side of heat sink in connect with another thermocouple, which again touches to a metallic sheet touches the geo thermal heated water. The heat transferred to the hot junction of the thermocouple through the aluminium body of the thermocouples. Output from the thermocouple mounted in-between the heat source and sink was taken out and output wires were protected using shielding of cylindrical shape.

In Bangladesh, a small country of Southeast Asia with population more than 160 million, urban and sub urban people mainly use gas as domestic fuel and also use various fuel dependent stove or burner. On the other hand in rural areas people mainly use handmade soil fireplace and also a large number of people use moveable gas stove or other fuel dependent stove or burner. About 15,48,886 domestic users are directly connected with gas line in Bangladesh (Report 2012-13 of Titas gas transmission and Distribution Company limited of Bangladesh) [17]. So, if the waste heat of these burners can be converted into electric power to drive a LED bulb in each kitchen, then a significant amount of power can be generated or saved all over the country. The objective in this work is to use fire of conventional kitchen gas stoves of Bangladesh as a source of electric energy and to convert it to produce small amount of electricity using thermocouple.

The basic methodology of this work is, heat energy of stove fire will be applied directly to the thermocouple by mounting a thermocouple array in fire outlet of stoves. This will generate small amount of voltage in another terminals of thermocouples in response to the application of the heat energy. Outputs from several thermocouples will be added and will be used to charge a small rechargeable battery. This battery can be used later to drive small loads like LED bulbs in kitchen. For our experiment, we used Thermocouples, Aluminium frame, adder IC LM324-N, LED few bulb and a 6 volt small rechargeable DC Battery. 120 K type thermocouple was used in this work which is quite available and inexpensive. All thermocouples were inserted into an aluminium frame that we prepared in a customized shape. This frame can be easily set in our kitchen gas stove without disturbing cooking in the stove. Output from each thermocouple was connected to an adder IC LM324-N. This adder will add individual output voltage of these thermocouples when they are heated in the stove. This output voltage will be used to charge a rechargeable DC battery so as to store this energy for later use.

Figure 1 (a) and (b) shows, respectively, the thermocouple that was used in this experiment and custom made Al frame to insert multiple thermocouples. 400 pieces of thermocouple were used in our experiment. Output from each thermocouple was 20 mv when they were heated in gas stove. Corresponding output voltage of the adder IC was found to be around 8 V, as expected. The output of the adder was used to drive 6 LEDs each having power rating of around 0.5W. So, total 3W was consumed by these 6 LEDs. The LED glows as long as the stove is ON. We also wanted to charge a 6 volt rechargeable battery to store this produced energy for later use. For this, the adder output was used to charge a 6V rechargeable battery of 300 mAh rating, with a charging current of 30mA drawn from the adder output terminal. Figure 2 shows the full experimental set up to charge the battery from stove through thermocouples and conversion circuit. Figure 3 and Fig. 4 shows the general block diagram and conversion circuits, respectively. 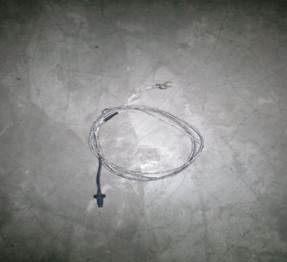 Fig. 1. (a) A Thermocouple and (b) custom made aluminium frame to insert multiple thermocouples to mount in stove. 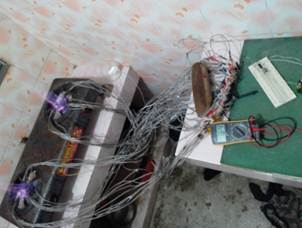 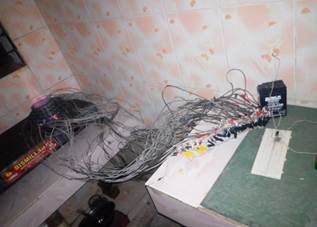 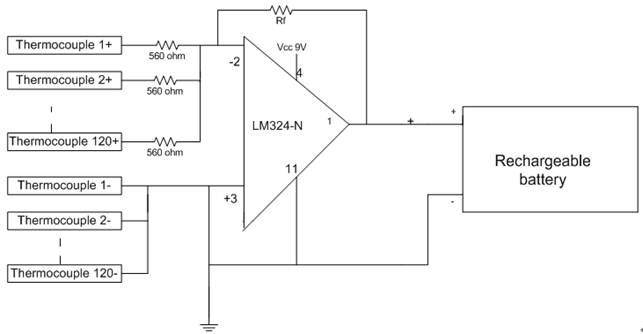 Fig. 4. Circuit set up for the overall conversion and storage process.

If we only count fixed domestic gas burners of Bangladesh, used mainly in urban and sub urban areas, then there are total 15,48,886 number of domestic gas connections as on June, 2013. If 6 parallel LED bulbs of total 3W is operated by the produced electric power in proposed process then, total amount of power generation is 15,48,886 *3 W = 46,466, 58 W ≈ 4.6 MW. In practice, watt rating of bulb used in kitchen is either minimum 40 W if a typical bulb is used or minimum 14 W if energy saving bulb is used. So, an average minimum 27 W is using in each kitchen for lighting purpose. So, if it is replaced by this thermocouple generated power driven LED bulb, then total energy saving will be around 15,48,886 * 27 W = 4,18,19,922 W ≈ 41.8 MW. It has to be kept in mind that, this calculation is only for domestic gas connection, whereas our thermocouple will work in any type of fire stove run by any fuel. Thus, if burner of any category as used by overall population of the country is included in this calculation then the generation power will be much higher than this.

In this work, we have demonstrated an easy way of producing small amount of electric power from waste heat of our domestic gas stove using thermocouples. A number of thermocouples were suitably mounted in gas stove without hampering normal cooking process. The resultant electric energy from multiple thermocouples was added. We showed that a small DC battery can be charged using the produced power which can be used to glow a LED light or small DC appliance like mobile phone. We also showed that, if such set up is used with all existing domestic kitchen stoves, then a reasonable amount of power can be saved in total. We used normal and available thermocouples for our experiment. If better thermocouples can be used then temperature to electric power conversion rate will be higher and more power can be produced. We implemented our project in kitchen gas stove where we can get only a small amount of heat. If this idea is implemented in industry level where there is various kind of waste heat, then relatively larger amount of power can be generated to support basic internal needs within their office. This project is especially useful, in remote and coastal area where there is limited or no electricity to run even small loads like charging a mobile but there is always any kind of fire place for cooking for the basic survival of human needs.