A non-conventional source of energy is needed to minimize pollution and make it eco-friendly. Efforts are being done in the discipline of eco-friendly energy sources. The current project is a part of that hunt. In the current project heat is gained by the exothermic reaction of CaO (quick lime) with water. The project uses a thermoelectric generator made of copper and cupric oxide junction known as thermocouple. The heat produced by the above reaction will produce a temperature gradient and will produce current. The product formed is calcium hydroxide (Ca (OH)2) which can be used in many industries. So no harmful waste products are formed during the reaction. The reaction occurs in a thermally insulated tube. The efficiency of above reaction is about 90%. Although the efficiency of thermocouple ranges from 6-8% but the price of CaO is extremely low as compared to other fuels and there is no mechanical loss as heat is directly converted into electricity.

Conventional sources of energy produce pollution. Renewable energy sources are required to control the pollution emission in atmosphere. Many energy sources are presently producing electricity i.e solar energy and wind energy [1,2]. The project also presents a new source of energy that is Calcium oxide. Calcium oxide (CaO) commonly known as quicklime, is a widely used chemical. It finds its application in many industries. One of important property of CaO is its reaction with water:

The product formed is Calcium Hydroxide (Ca (OH)2) which itself is a very useful chemical. It is also used in many industries. Also heat is released during the reaction. This heat energy can be converted to electrical energy [3]. The project uses Calcium oxide as an energy source. The reaction between CaO and water is carried out in equal mass ratio. The container in which the reaction is carried out is enclosed in a thermally insulated box. The yield of above reaction is almost 90%.The price of calcium oxide is very low as compared to other fuels. Also no harmful products are produced [4,5]. Devices like Stirling engine can also be used to convert heat energy into electrical energy. But in case of stirling engine a lot of mechanical loss occurs which reduces the efficiency of the system. To avoid it, we have used thermocouple in the current study.

Thermocouple generator works on the principle of seebeck effect. It is a junction between two dissimilar conductors [6]. Whenever the junction is heated a current starts to flow (Figure 1). 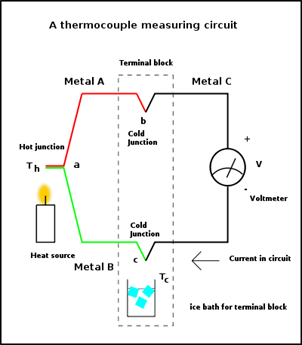 Figure 1. Schematic representation of a thermocouple.

The exothermic reaction of CaO and water forms the basis of our experiment. The heat generated by the reaction is converted into current using a thermocouple and is recorded using a galvanometer [7]. The apparatus used for the purpose is composed of three basic parts:

(a) A box is designed to carry out the reaction efficiently. Box is divided into three part:

Ÿ The container in which reaction is carried out. It is made of stainless steel (Figure 2):

Ÿ A layer of polyuthrane to ensure proper insulation.

Ÿ Box which encloses both container and insulation.

(b) A thermocouple generator:

Thermocouple generator is made of two copper wires. The end of the one wire is heated in methane to convert it into Copper oxide (Figure 3):

As thermocouple is formed between two dissimilar conductors so Copper oxide and Copper wire provide this junction (Figure 4): 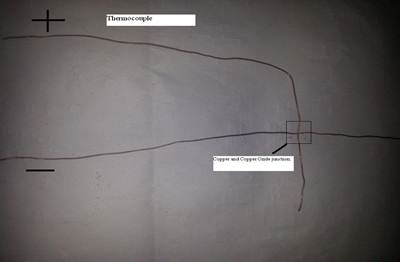 Multiple generators are used in our studies.

(c) A galvanometer, attached to the thermocouple.

For operating thermocouple generator, the container is filled with Calcium oxide. As soon as water is poured in the container to start the reaction, heat will be produced, which will be converted to current. Amount of current produced will be detected by the deflection of galvanometer needle [8, 9].

To find the best molar ratio between Calcium oxide and water which will provide us the maximum heat for long period of time few experiments are conducted. Findings are given in the graphs (Figure 5): 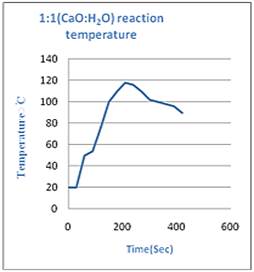 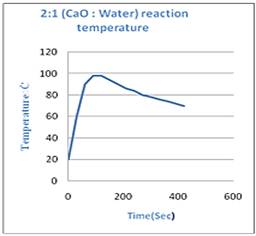 From Figure 5 we conclude that when amount of reactants is in 1:1 of calcium oxide and water, it is the most efficient and provide maximum heat for longest period of time. The heat evolved during the reaction can be calculated by the formula [10,11]:

The temperature is noted every 30 seconds and ten readings are taken. The insulation used is polyuthrane. Now if we calculate insulation efficiency we can use the formula:

Current produced is detected by galvanometer. It can be calculated by the formula:

Where K is called the Reduction Factor of the tangent galvanometer and θ is the amount of deflection of galvanometer needle.

Amount of current produced in amperes as the reaction proceeds can be analyzed by the Figure 6:

Electrical power generated during the reaction by thermocouple can be calculated by formula:

Where; I is current produced and R is resistance of galvanometer. mount of power generated with the passage of time can be analyzed by Figure 7: irstly the Figure 5a is analyzed. From the data we can calculate the average rise in temperature that is 85oC, we will consider it as final temperature. The total heat produced is denoted by q1 can be calculated by formula [12]:

Now we analyze figure 5b, the average rise in temperature is 78oC. Performing same calculations we get,

We conclude that equal ratio of CaO and water produces greater amount of heat [13]. We can also calculate the efficiency of insulation by using formula:

By putting the values we get, 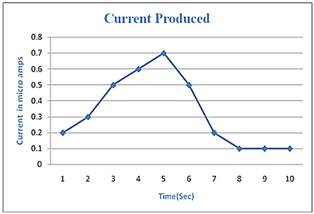 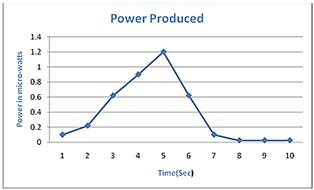 Main features of above project are:

Ÿ No harmful by products produced.

The project can be implemented industrially with some modifications as:

Ÿ Modification in insulation design and the material used.

Ÿ Using a catalyst to further increase the yield of the reaction.

In short the findings suggest a promising future for calcium oxide to be used as a source of electricity generation. Using this theme with improved modifications it might lead to a reliable source of energy, which will contribute in solving the current energy crisis in Pakistan and around the world. Also efforts are being exerted to make more efficient thermocouple using doped semiconductors. This use of CaO can help in producing energy efficiently in remote areas where solar and wind energy production is difficult and less efficient. This type of non-conventional source of energy can help in producing eco-friendly energy sources. This project can be refined further for large scale implementation, thus, leading to the solution of current energy crisis in Pakistan.

We are thankful to our Principal Air Commodore Shakeel Ahmed Malik for his motivation and provision of smooth and sound work environment. We also offer our deep gratitude and acknowledgement to Dr Arshad Ali, Head of Department Research (MCE-NUST) for his moral support and intimate guidance by keeping a constant touch with us for the accomplishment of this study.