The fundamentals of heat transfer and fluid flow in porous media have been considered widely such as [1-4] because of its importance in many engineering applications, such as: petroleum processing, geothermal energy extraction, catalytic and chemical particle beds, heat transfer enhancement, solid matrix or micro-porous heat exchangers, direct contact heat exchangers, heat pipes, electronic cooling, drying processes, and many others.

Khanafer and Chamkha [9] investigated numerically the mixed convection in a horizontal annulus filled with a uniform fluid-saturated porous medium in the presence of internal heat generation. The effects of the Rayleigh number, the Darcy number, the annulus gap, and the Richardson number on the flow and heat transfer characteristics were considered.

The lattice Boltzmann method (LBM) is a powerful numerical technique based on kinetic theory for simulation of fluid flows and modeling the physics in fluids [12-16]. In comparison with the conventional CFD methods, the advantages of LBM include: simple calculation procedure, simple and efficient implementation for parallel computation, easy and robust handling of complex geometries and so forth. In the last years lattice kinetic theory, and most notably the lattice Boltzmann method has evolved as a significant success alternative numerical approach for the solution of a large class of problems ( [12,17,22])

Seta et al. [23,24] used thermal lattice Boltzmann method to study natural convection and other thermal problems in porous media. They confirm the reliability and the computational efficiency of the lattice Boltzmann method in simulating natural convection in porous media at the representative elementary volume scale. The influence of porous media was considered by introducing the porosity to the equilibrium distribution function and by adding a force term to the evolution equation. Mantle et al. [25] investigate experimentally and numerically the flow of a Newtonian liquid through a dual porosity structure. The numerical simulations have been carried out using lattice-Boltzmann method.

Shokouhmand et al. [26] numerically simulated the flow and heat transfer between two parallel plates of a conduit with porous core using lattice Boltzmann method. They investigated effects of various parameters such as Darcy number, porous medium thickness on the conduit thermal performance and showed that all these parameters have remarkable influence on thermal performance of the channel in certain conditions.

In previous studies [21,22,27] the lattice Boltzmann method was employed to investigate the effect of the heater location on flow pattern and heat transfer in a cavity numerically. Results showed that the location of heater and Rayleigh number have considerable effects on flow and temperature fields.

In this simulation, a two dimensional model with nine velocities, D2Q9, has been used. The general form of Lattice Boltzmann equation with external force can be written as [15]:

is the discrete lattice velocity in direction k,

is the external force in direction k, τ denotes the lattice relaxation time, and

is the equilibrium distribution function which is calculated with:

The flow properties are defined as, ρ=∑kfk, ρui=∑kfkck and T=∑kgk , sub-index i denotes the component of the Cartesian coordinates.

The Brinkman-Forchheimer equation which has been used successfully in simulation of porous media [23,24,27,28] was used in this study. This equation after improving as below was used for both fluid and porous zones:

where ε is the porosity of the medium, υeff is the effective viscosity, υ is the kinematic viscosity, and K is the permeability. For porous medium the equilibrium distribution functions are:

The matching conditions at the fluid-porous interface are satisfied automatically due to the unified governing equation (4). Therefore employing LBM significantly reduces the complexity of the traditional methods, which consider two regions separately. More information about porous media simulation with LBM is presented in [22,23,24].

To proper investigation of conjugate convection and conduction heat transfer in porous medium, the effective thermal conductivity of the porous medium (keff) should be identified, which was calculated by (Jiang et al. [30]):

kf and ks are fluid and solid thermal conductivities, respectively.

For isothermal boundaries such as bottom wall the unknown distribution functions are evaluates as: 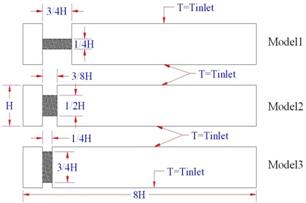 Computational domain consists of a heat generating porous block which is located between two obstacles in a channel, Fig. 1. The effects of flow Reynolds number, porous block porosity and length over the fluid flow and heat transfer in the channel were investigated. The working fluid was air and porous matrix material was metal (Aluminum) and thermal conductivity ratio was set asσ=1.0×10-4. The flow was set fully developed at the inlet. The fluid at the inlet and all upper and bottom walls in clear channel as well as in contact with porous media are in same temperature, Tinlet. Other parameters of simulation are presented in Table 1.

Local and average Nusselt numbers are defined on isothermal walls in x and y directions as below:

Table 2. Comparison of averaged Nusselt number between LBM and Kays and Crawford [31].

In this study two dimensional thermal lattice Boltzmann method was employed to simulate flow and thermal fields in both clear and porous zones. Table 2, illustrates a good agreement between obtained Nusselt number by LBM and Kays and Crawford [31] for flow in clear channel. Another validation has been carried out for flow in the channel partially filled by porous medium, Figure 2. Regarding comparison between results of present simulation and Alazmi and Vafai study [8] it can be seen that present model indicates appropriate accuracy in predicting velocity profile in clear and porous zone and their interface.

For grid independency check, the averaged outlet and fluid temperature were calculated at different grid points. The grid point 40×320 was selected for simulations due to the results of the Table 3 and time saving.

Simulations of flow in three models which have identical surface were carried out with Lattice Boltzmann Method. The influence of different operating parameters on the fluid dynamics as well as on the heat transfer is discussed in following paragraphs. 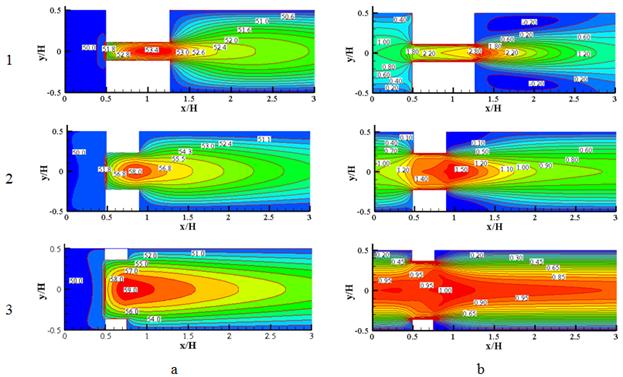 Figure 3. a) Temperature contours (°C), b) Contours of 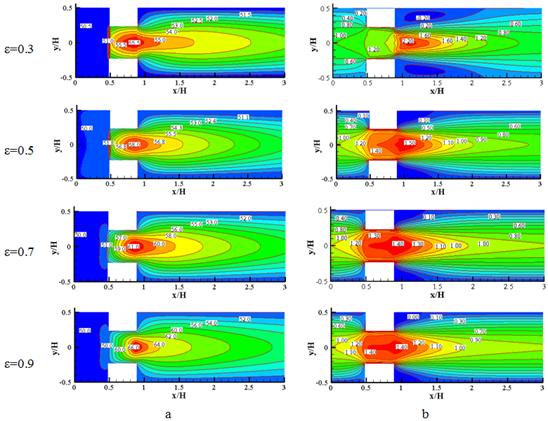 Figure 4. Effect of different values of porosity for the second model at Re=40, σ=10-3, a) Temperature contour (° C), b) velocity contours 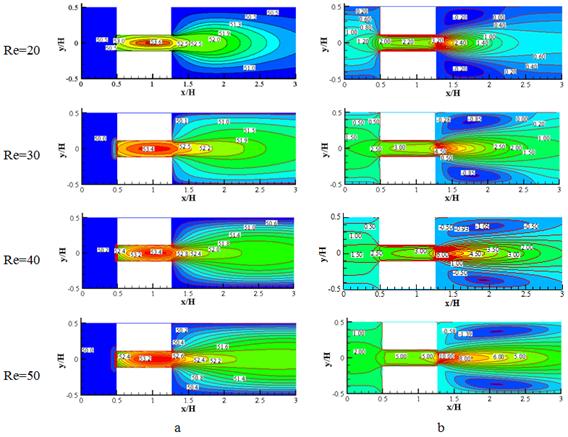 ) contours for different models are shown in Fig. 3. As can be viewed, once porous block's height rises in constant value of porosity and Reynolds number, maximum temperature of fluid increases.

Fig. 4 indicates the effect of porosity on heat transfer and fluid flow. Increasing porosity results an enhancement in fluid's temperature because of less heat transfer with adjacent cold walls. As porosity decreases, it would cause a growth in effective thermal conductivity due to development of solid's zone in porous block. So, there would be more heat transfer between fluid in porous block and cold isotherm walls and as a consequence fluid temperature declines. Furthermore, following of decreasing porosity, resistant force against fluid flow would be increased which causes an enhancement in boundary layer's thickness. With attention to constant profile of fluid's velocity at inlet, fluid's maximum velocity would increase. As can be seen in Fig. 4b, higher boundary layer's thickness and fluid's velocity at ɛ=0.3 has been caused a reverse flow region and vortex behind obstacles. Same behavior in Fig. 4 was observed for model 1 and model 3 like this model. Fig. 5a illustrates temperature contours of model 1 in constant value of porosity (ɛ=0.5) for different Reynolds numbers. Higher fluid's velocity reduces the time of heat transfer between fluid and heat source in porous block so fluid's temperature would diminish.

Temperature contours for different values of σ (=kf / ks) at three mentioned models while porosity and Reynolds are constant (ɛ=0.5, Re=40) have been plotted, Figs. 6-8. Increase in thermal conductivity coefficient of solid zone (ks) causes a growth in effective thermal conductivity coefficient (keff) of porous block. So there would be more heat transfer with adjacent isotherm cold walls. As a consequence, fluid's temperature would be declined.

Fig. 9a shows temperature contours in different values of Reynolds numbers for model 3. Fluid's temperature would stay constant from inlet to porous zone which is equal to inlet temperature.

, which Q is fixed in all velocities, u). 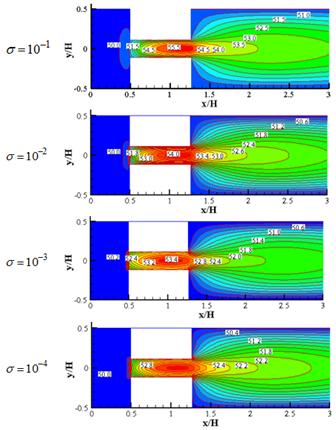 Figure 6. Temperature contours for model 1 at

and different values of 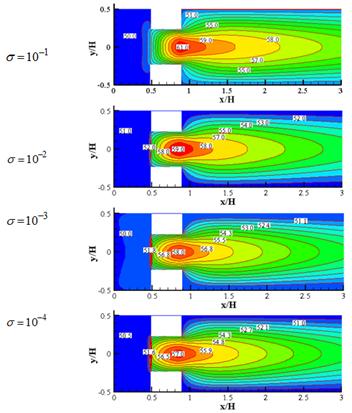 Figure 7. Temperature contours for model 2 at 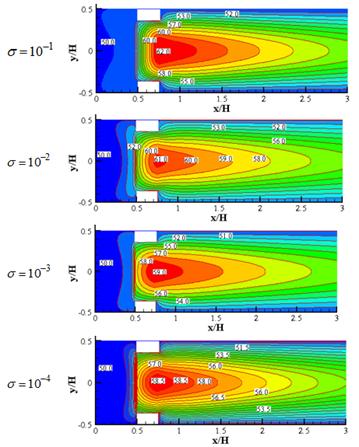 Figure 8. Temperature contours for model 3 at

, Re=40 and different values of

According to the above evaluations about different effects of fluid's velocity inside and after porous block, although with rise in Reynolds number maximum temperature decreases, averaged fluid temperature would be enhanced, Fig. 9c. By increase in Reynolds number there would be less heat transfer between fluid and heat source in porous block. Moreover, heat transfer with cold adjacent walls would enhance because of increase in Nusselt number. But as can be viewed from velocity contours in Fig. 5, by increase in Reynolds number, fluid flow state after porous block would become near to jet flow. This factor has more influence on averaged fluid temperature than two previous ones. In porous block according to (7) effective thermal conductivity coefficient develops in comparison with clear zone. So more heat transfer with cold walls occurs in this part and consequently the model which has the most contact length between porous block and cold walls (model 1) would have the lowest average temperature in contrast with other models (Figs. 3 and 9c). 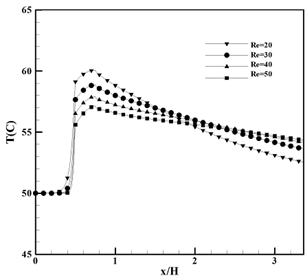 G: Acceleration due to gravity (m.sec-2)

ε: is the porosity of porous media

b_w: from block to adjacent walls