Generating energy from wind as a renewable energy resource has always been a growing field of study. This article analyzes the aerodynamics of Savonius wind turbine with vertical axis. Blades with multi stacks can give rise to blade efficiency. For this purpose, different models of blades were suggested and the impact of blade intervals on the torque output has been studied. Moreover, the flow of fluid around the turbine rotor has been calculated with the CFD method and the standard k-ε turbulence model is used. The simulations were performed at four different wind velocities of 3, 4, 5, and 6 m/s. The rotor torque is analyzed with different rotor angles from 0 to 360 degrees with 30° pitches. The results clearly show that the torque output increases as the intervals between the blade stacks decrease. Also this paper, for the first time, shows that as the thickness of the outer blade’s slot increases, the torque will decrease.

The need for more electrical power generation is increasing, with more than 90% of the world’s energy resources provided by fossil fuels. On the other hand, consuming fossil fuels releases greenhouse gases which are the major cause of global warming addition to causing air pollution. Furthermore, fossil fuels are not sorted as renewable energy resources and the highly priced market for these fuels are not affordable for many countries. So the search for renewable energy resources is a crucial and vital issue for many countries. Unlike fossil fuels, renewable energies are clean and available. Also they mostly origin from nature which means they are endless and available all over the world. Solar energy, wind, geothermal and sea waves are just some of the many resources for renewable energies. Specifically, wind energy is one of the most economical and convenient alternatives for fossil fuels. Sea shores, heights, rooftop and even highways side are currently used in many countries for generating electric power from wind. Wind energy does not pollute the environment and is available both in urban and rural areas. These are just some of the many advantages of this natural energy resource. Hence, different turbines are designed and constructed in order to generate energy from wind. These kinds of turbines can be classified in two categories: horizontal axis wind turbine (HAWT) and vertical axis wind turbine (VAWT). HAWTs are mostly used in areas where permanent wind and large wind power plants are available. However, VAWTs are suitable for exploiting energy in areas with low speed wind [1]. Savonius wind turbine is one of the most recognized models of VAWT. This turbine was first presented by a Finnish engineer named Savonius in 1929 [2] and is composed of some semi cylinders which operates with dragging force on blades. Insensibility to the direction of wind and turbulence of flow and overmuch torque generating are some features of this kind of turbine. Savonius turbines can exploit 37% of wind energy [3]. These characteristics lead to the utilization of Savonius turbines in urban areas with low consumption and for places which are far from the power grid. Many studies investigated efficiency enhancements for Savonius wind turbine. In 2013, Hadi Ali [4] experimentally studied the Savonius wind turbine with two and three blades. The results showed that in the three blades case, the power coefficient and torque are better than the two blades one. Nasef et al. investigated the Savonius wind turbine with the different overlap ratios in 2013 [5]. They show that the 0.15 overlap ratio is the best among the 0, 0.15, 0.2, 0.3 and 0.5 ones. Also in 2013, Debnath et al. studied Savonius wind turbine with helical blade [6]. They concluded that the largest torque happens at 60° angle and the least is at 150°. Further, in 2012 Deb et al. [7] investigated a wind turbine with two blades and discovered that the greatest static pressure occurs at 90° and 270°. In 2011, Mactavish et al. [8] developed an advance model for Savonius wind turbine.

In this model the blade is designed such that the rotor incident flow between the inner and outer blade is contracted and generates extra torque.

2. The Studied Geometry and Boundary Conditions

The studied geometry is originally designed from the proposed one by Mactavish et al. [8]. Their model presents double stacks blade. The outer blade is a semi cylinder with diameter of 127 mm and a slot with the thickness of d is inserted in the middle of it. This slot has two functions; first it avoids the negative torque caused by the clash of recursive flow from the outer blade to the inner one. Second; since negative pressure exist behind the blade, the flow sinks into the slot and induces an extra torque. The diameter of the inner blade and the thickness of each blade are set to be 50 mm and 2 mm, respectively. The outer blade’s slot thickness and the intervals between blades (h) are the factors that have influence on the rotor’s torque output.

The torque output was simulated and compared for different cases. For the angles between 0 to 360° with the 30° step, analysis of rotor’s torque is performed. In order to calculate the torque output in this simulation, the thickness of the slot was set to be d=7 and d=14 mm. Moreover, different thickness of h=4, 14, and 24 at velocities of 3, 4, 5, and 6 m/s are simulated.

In this paper FLUENT 6.3 has been used for simulations. As fig 1 shows, in this method the control volume is divided in two sub domain. Domain one includes the rotor and its around which has a constant rotational speed which is proportional to the incident wind velocity and blade tip speed ratio. Hence, the second domain is without the rotational speed and just contains the input wind velocity. 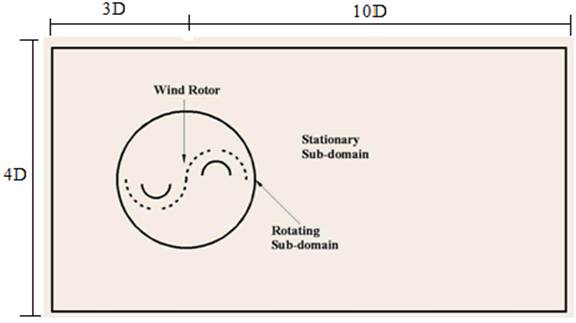 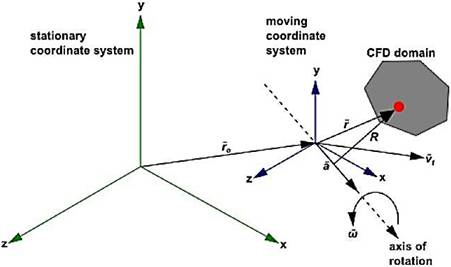 Also, for rotor’s rotation simulation in steady state the Moving References Frame (MRF) method is used. SIMPLE algorithm was used for calculating the velocity field along with pressure.

is density and V is velocity vector.

is density and V is velocity vector and p,

, and F are the static pressure, stress tensor, gravitational force of the object and external force, respectively. The viscous stress

given by equation (2), is calculated as following:

The transport equations considerate for the turbulences quantities from RNG k-ε model are described by Equations (4) and (5).

In this paper the k-ε standard model is used which can be demonstrated as:

represents the generation of turbulent kinetic energy due to the mean velocity gradients, and the quantities

are the inverse effective Prandtl numbers for k and ε, respectively. The effective Viscosity,

, is calculated by the combination of the turbulent kinetic energy (k ) and the dissipation ratio (ε).

Meshing was performed with Gambit software. The number of elements for the two dimensional calculation are 17000.The Validation was done with the paper of Hadi Ali [4] which had done an experimental research in wind tunnel on a two blades rotor with 200 mm diameter at 5.3 m/s wind speed. Fig 3 shows the geometry of the documentation.

Fig. 3. a) Geometry of validation [3], b) Validation of the steady numerical predictions with experimental torque results. 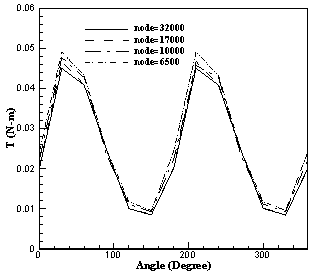 As fig 4, shows the increasing of mesh numbers just influence the result at 30 and 60 degree and finer mesh results in more exact output for these angles. As it can be seen in this figure, mesh independency happens at mesh number of 17000, that is why it is chosen for simulations.

As discussed in previous sections, the torque output is influenced by two factors. The simulation is performed for the mentioned geometry at different cases and the torque output is calculated for each case at different velocities. An analogy between two rotors with simple blade and double stacks blade at 5 m/s is illustrated in fig 5. Fig 5 shows that,  due to the increasing contraction area between the blades and flow, and also contraction of the flow between the two blades, pressure increases and as a result the torque increases, too.

The torque output for a rotor with double stacks blade is more that the simple blade one. The existence of an inner blade in the rotor plays an important role here. It can be easily seen in fig 6 that the less this inner blade barricades the flow, the less the torque output become. It means that torque of the proposed model surpass the simple rotor at the zero degree and maximize at 30°. The reason is that the inner blade is located completely in front of the flow at 30° and its aerodynamics condition is suitable. Furthermore, at 60° the torque decreases but unlike the simple rotor model, it is more than the torque at zero degree. Again the inner blade caused the torque output at 90° to surpass its amount at zero degree. Although by shifting the angle to 120° the inner blade’s effects decreases, but still its performance is superior to that of the rotor with simple blade. This reduction in torque continues until 150o at which the performance of the new model is similar to the simple model. The pressure contours at 5 m/s for 30° for all cases are shown in fig 7. 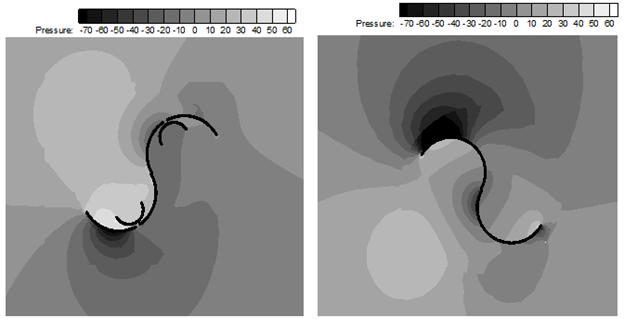 Fig. 5. A Comparison between rotor’s pressure contour for simple blade and double stacks blade at the rotor Rotation angle of 30 degree. 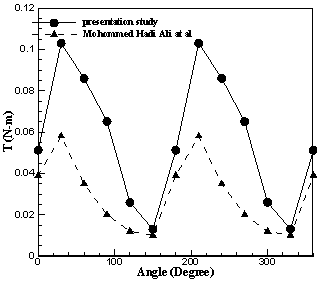 Fig. 6. A Comparison with rotor torque for two blade and proposed models.

Fig 8 shows that as the wind velocity get higher, the rotor’s torque increases, too. According to the above description, the rotor’s torque does not change so much at the angle of 120 and 150°. The reason of torque decrement can be seen obviously in fig 8. The inner blade has its maximum efficacy with rotor rotation at 30° (fig 9). When rotor reaches 120°, this blade’s efficacy decreases and experiences its minimum at 150°.

The thickness of the slot located at the outer blade’s back is another factor that has great influence on the torque output of the rotor. Fig 10 shows an analogy between the slot thickness of 7, 14, and 21 mm with the constant stacks interval of 24 mm and at the speed of 6 m/s.

As can be clearly seen in fig 10 the larger the  outer blade slot thickness, the lower the torque output. Because the slot thickness is greater the input wind flow easily back removed and a little momentum is built. 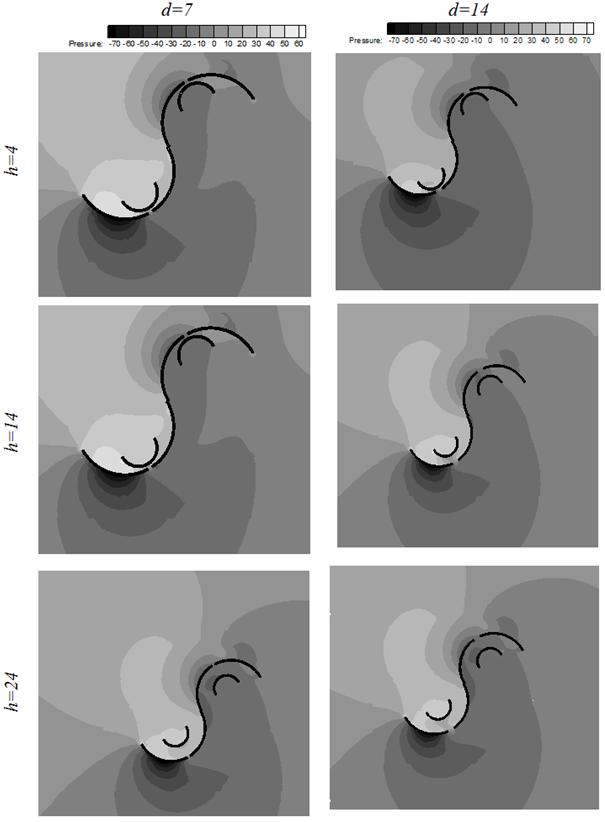 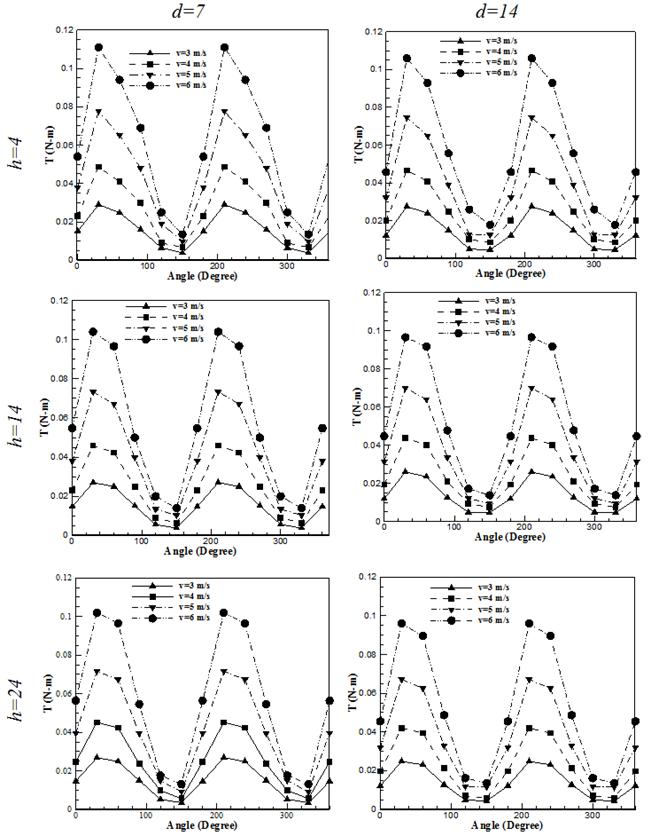 Fig. 8. Torque at different speeds in different d and h. 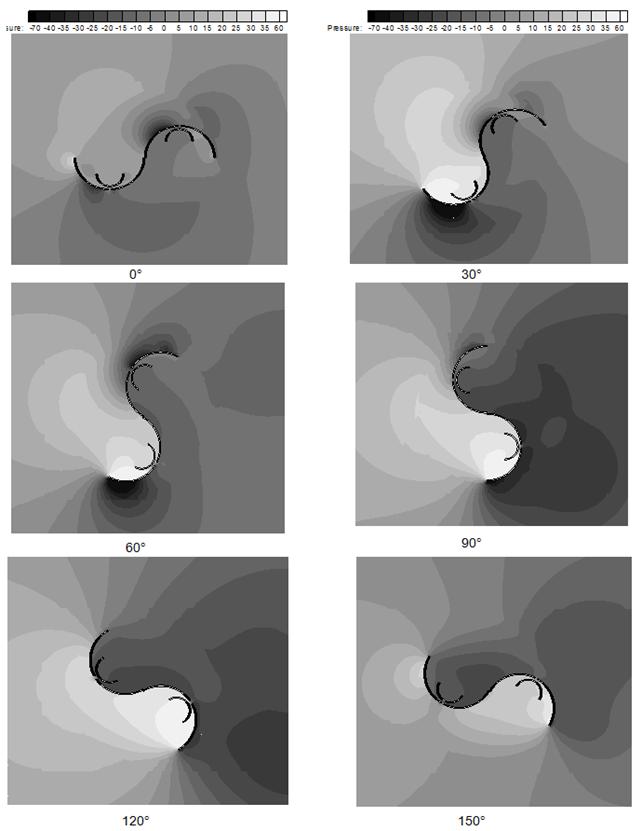 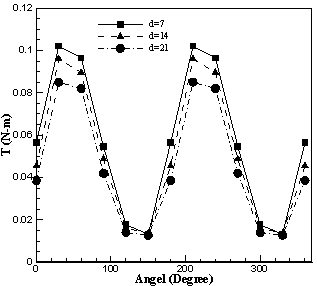 This article, for the first time, studies the aerodynamics performance of vertical axis Savonius wind turbine with double stacks blades rotor. The following results are drawn:

·     The closer the stacks blade to the main blade, the more rotor torque output

·     For larger main blade thickness, the fluid easily flows around the blades and as a result the torque output decreases

·     As one might expected when the input flow velocity increases, the rotor torque output also increases