Pore pressure predictions for an onshore Niger Delta area were made using offset well logs. Mild – to – moderate overpressure regime was estimated in the area. Onset of mild overpressure (<0.6 psi/ft) in the area is at about 6600 – 11500ftss. The pressure increases with depth to become moderately overpressured (< 0.8 psi/ft) throughout the depth extent of about 12200 – 15700ftss.

In an overpressured region such as the Niger Delta, knowledge of the formation pore pressure regime is critical for safe and economic drilling operations. Costly problems associated with drilling through overpressured zone include wellbore stability problems, well kicks and blowouts, lost circulations, etc. Understanding the pore pressure regime of the area will help to ensure a better volume and risk assessment of the trap integrity. The well design and field development plan can also be better constrained. The Niger Delta formation has been reported by several authors to be overpressured (Nwozor et al, 2013; Opara et al, 2013). Several well incidents such as blowouts, lost wells and mud losses have also been reported (personal communications) in some parts of the onshore Niger Delta where some wells have penetrated deep overpressured zones.

The Niger Delta is a major geological feature of significant petroleum exploration and production in Nigeria, ranking amongst the world’s most prolific petroleum producing Tertiary deltas. The onshore Niger Delta is situated on the continental margin of the Gulf of Guinea on the West Coast of Africa and lies between latitude 40 and 60N and longitude 403l and 80E. The geology of the Niger Delta has been extensively studied by several authors and is now well documented (Reyment, 1965; Short and Stauble, 1967; Murat, 1972; Doust and Omatsola, 1990). The Niger Delta is bounded in the north by the Benin flank; an east-northeast trending hinge line south of the West African basement massif. The northeastern boundary is defined by the outcrops of the Cretaceous Abakaliki anticlines, extending further to the southeast as the Afikpo syncline and Calabar flank. The Niger Delta basin consists of three main lithostatic formations namely, the topmost Benin Formation which consists of massive continental fluviatile gravels and sands; the Agbada Formation which represents a deltaic facies and the Akata Formation which consists mainly of marine shales. The Akata shale which is significantly overpressured is believed to be the main source rock of the hydrocarbons, usually trapped in faulted rollover anticlines associated with growth faults. In the last 55 Ma, the Niger Delta which is predominantly composed of regressive clastic sequence has prograded southwards, forming some depobelts (Figure 1) 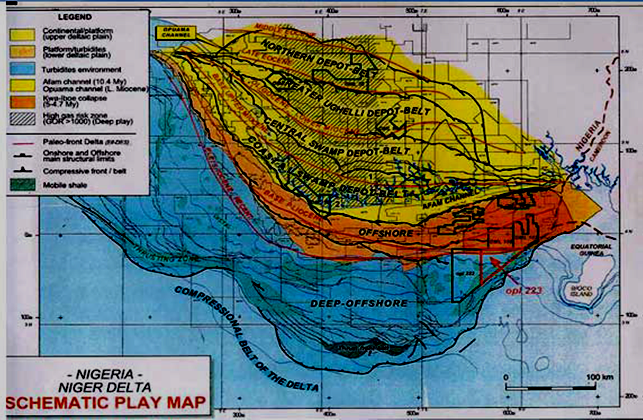 Where g is the acceleration due to gravity and r(z) is the bulk density which can be obtained from the density log, if available.

The overburden stress at any depth is determined from the lithostatic gradient and the effective stress can be obtained from the response to changes in the shale porosity. In a normally compacted shale, the effective stress increases as the porosity decreases. Thus by defining a normal compaction trend (NCT) within the shale, one can compare between the porosity expected if the thick shale sequence is normally pressured and compacted, and the measured porosity from the well at the depth of interest.

Pore pressure predictions using offset well data begins with the construction of the NCT. The assumption is that in the shallow section, the sediments are normally pressured. Therefore the data from the shallow section can be used to create the NCT and extrapolated to depth using geologically reasonable values. A departure from the normal compaction curve, having porosities higher than indicated by NCT at the same depth is the beginning of overpressure. 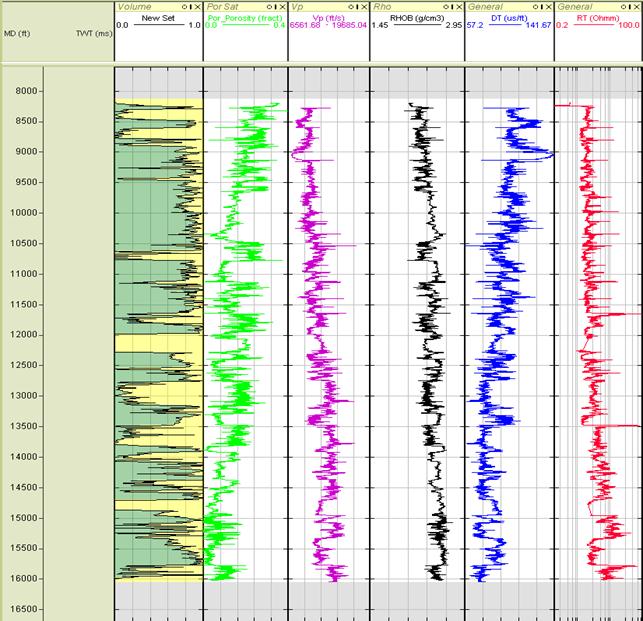 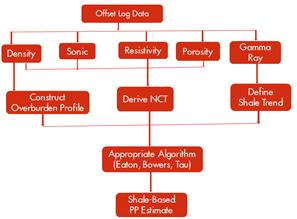 Bowers’ (1995) proposed that the compressional velocity Vp and the effective stress s have a power relation in the loading stage of the form:

Where Vml is the compressional velocity at the mudline (about 5000 ft/s). The parameters A and B are calibrated with offset velocity versus vertical effective stress data.

Equation 4 is then substituted in equation 1 (Terzaghi, 1943) to obtain the pore pressure:

The Tau variable was introduced into the effective stress equation in a transit time dependent pore pressure prediction method (Lopez et al, 2004; Zhang and Wieseneck, 2011). This is an empirical relationship linking velocity to vertical effective stress:

Where A and B are fitting constants derived from local data and the Tau variable,

is the scaled sonic which can be defined as:

Where Dt is the transit time from either sonic log or seismic velocity, C and D are constants related to the mudline and matrix transit time respectively.

The pore pressure calculation of Terzaghi (1943), using the Tau model then becomes 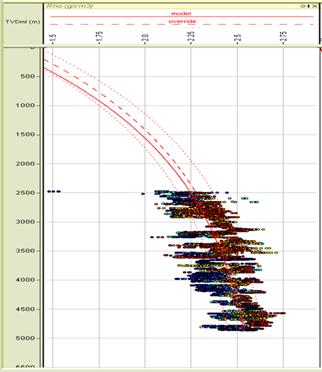 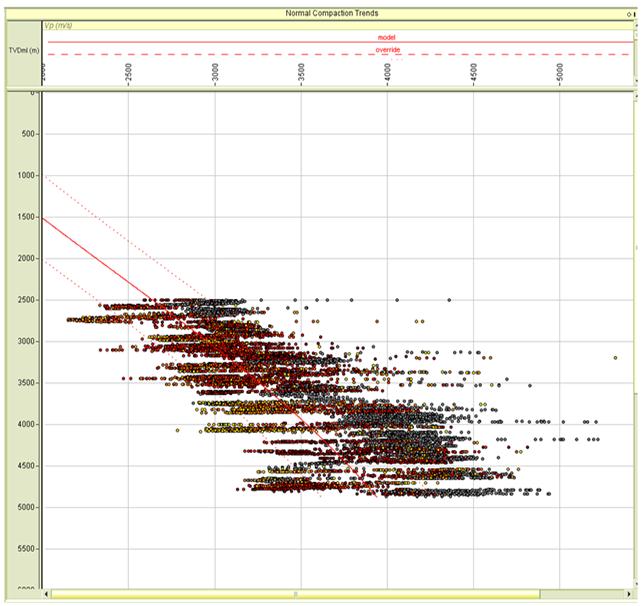 To predict the pore pressure at the study area, well logs from three offset wells, namely Well A, Well B and Well C, were used. Key logs in the wells include density, sonic, resistivity, porosity and gamma ray (Figure 2). Figure 3 shows the workflow for the offset well-based pore pressure prediction used in this study. The software used was RokDoc 5.1 (www.ikonscience.com). Using the well logs, the overburden profile, normal compaction trend and shale trend were generated as shown in Figures 4, 5, and 6 respectively for Well C. These data were applied in the pore pressure prediction models of Eaton, Bowers and Tau (equations 3, 5 and 7) to estimate the formation pore pressure of the area.

Figures 7, 8 and 9 show the pore pressure predictions obtained from wells A, B, and C respectively. The predictions were obtained employing the Bowers, Eaton and Tau model of equations 3, 5 and 7 respectively. Overall, the results showed that the area is overpressured, ranging from mild-to-moderate overpressure. The onset of mild overpressure (<0.6psi/ft) lies within the depth range of about 6,600 ftss in Well A and about 11,500ftss in Wells B and C. The formation pressure increases with depth to become moderately overpressured (<0.80 psi/ft) throughout the depth extents of the three wells. In all the wells, predictions obtained using the Bowers and Tau models showed better agreement with measured pressure data (RFT and MDT) than those obtained using Eaton’s exponent model. The Eaton’s exponent model slightly underpredicted the pore pressure of the area. This is in agreement with the result obtained by Ugwu (2015) in the same area using seismic data. 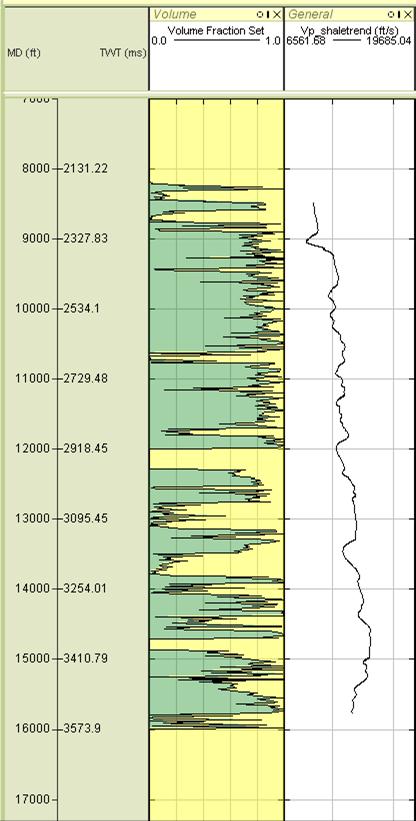 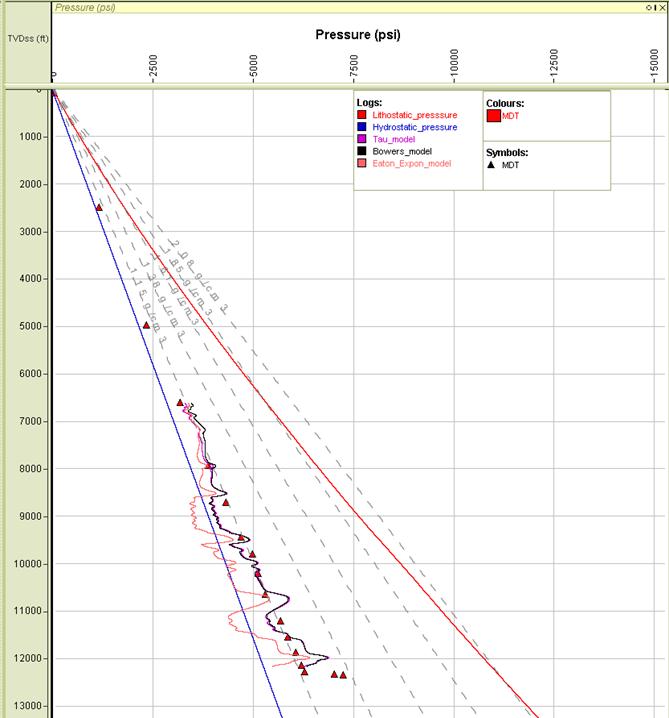 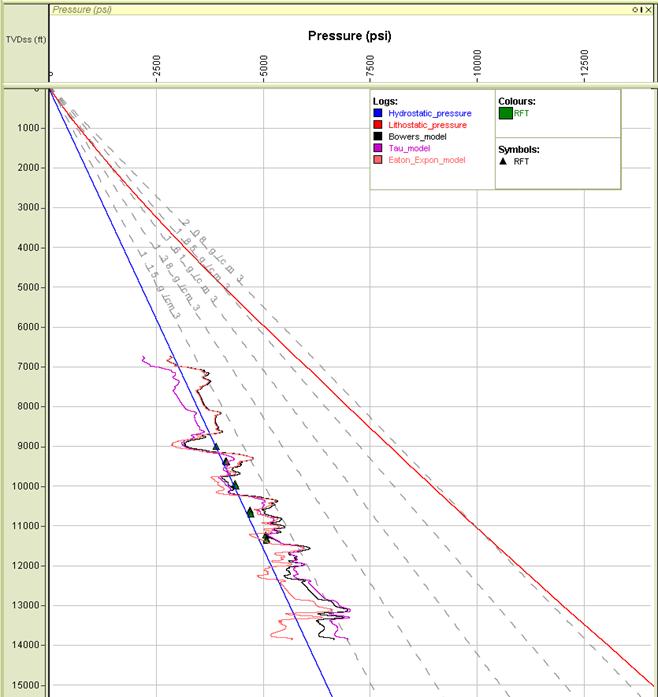 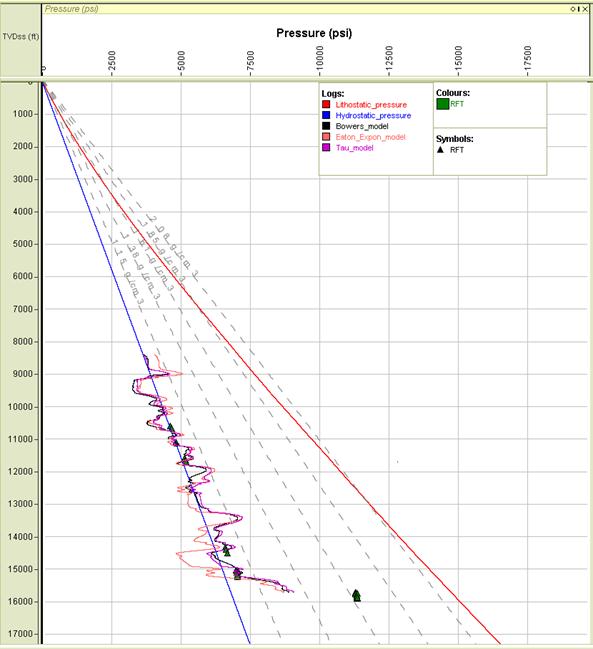 Pore pressure predictions for an onshore Niger Delta area were made using offset well logs. The result showed that the area is overpressured, ranging from mild- to - moderate overpressure. In all the three wells used, better pressure estimates (more in agreement with the measured pressure data) were obtained using Bowers and Tau models than using the Eaton’s exponent model. The Eaton’s exponent model underpredicted the formation pressure of the area in all the Wells used and could be the least appropriate model for pore pressure prediction of the formation.