Trace elements are elements present in a rock or solution in such low concentration usually 0.01mg/l or 1ppm. The trace element occurs within by ionic substitution for major elements often indicative of the source of the rock (Kvetoslava, et al, 1997). Most often anomalous elemental concentrations are prevalent in groundwater characterized by suboxic to anoxic conditions. Underlying geological rocks are also potential sinks for the trace elements. However, trace elements can be dangerous in excessive amount to plants, animals and human beings. Two environments are prone to excessive amount of trace elements (Moore and Ramamoorthy, 1984). They are: Inland and closed basins in arid or semi arid areas and strongly reducing aquifers often derived from alluvium. However the study area is within an inland basin and it is underlain by upper cretaceous rocks (Akande, 1999). The area is characterized many environmental challenges imposed by human factor. They include among others indiscriminate waste disposal, open mine pits (forming saline lakes) and Basinal brine up flux. Offordile (1976) investigated the groundwater quality based on the major cations and anions. Oteze (1990) also investigated the distributions of trace elements in a similar inland basin, with the view that their mobilities are pH dependence. This study hopes to evaluate the levels, sources, sinks, distributions and mobilities of trace elements in parts of the Middle Benue Trough.

The study area consists of six upper cretaceous lithogenetic formation (Table 1).These include Albian Arufu, Uomba, Gboko Formations, generally referred to as the Asu River Group (Offodile, 1976 and Nwajide, 1990). These are overlain by the cenomanian keana and Awe formation and the cenomanian – Turonian Ezeaku Formation. The Ezeaku Formation is coterminous with the Konshisha River Group and the wadata limestone in the Makurdi area. The late Turonian-Early Santonian coal-bearing Awgu Formation lies conformably on the Ezeaku formation. In the Makurdi area, the Makurdi sandstone interfingers with the Awgu Formation. The mid-santonian was a period of folding throughout the Benue Trough. The post-folding campano-Maastrichtian Lafia Formation ended the sedimentation in the Middle Benue Trough, after which widespread volcanic activities took over the Tertiary.

Samples of groundwater from the aquifers of the Middle Benue Trough were taken (Table 2) from 12 (twelve) boreholes and 6 (six) springs. The samples were filtered through 0.45mm cellulose acetate filter and portions acidified on site. At each sampling location, three 50ml samples were collected using sterile McCartney bottles and transported to the laboratory in ice chests. The standard field procedures utilized is as explained by Stednick (1991).

Rock – water reactions chiefly determines the chemical composition of groundwater. As the water flows slowly through the aquifer, the composition gradually changes. And this off course defines the geochemical environment of the aquifer. The environment maybe oxic, suboxic to anoxic conditions, and may change producing a complex hydro chemical framework (Ozoko, 2004). In table 2, the elemental concentration of trace elements in groundwater aquifer in parts of the Middle Benue Trough is shown. Trace elements in excessive amounts are dangerous to human health, plants and animals. The elemental concentrations are usually high in areas close to mining pits, abandoned mine pits and brine areas. While relatively low concentrations occurred in areas far from these basinal brines. The sources, sinks and mobility of each trace element as investigated are discussed below.

Iron (Fe): The concentration of Fe is generally high in most locations, except at Ribi HDW, Lafia BH and Arufu HDW. The values range from 0.10mg/l to 62.50mg/l with an average of 6.53mg/l. The values exceed the WHO standard of 0.30mg/l. Therefore the groundwater can be regarded as polluted. Possible sources maybe the dissolution of iron-clay minerals reduction of iron-sulphide minerals to produce elemental Fe and anthropogenic sources (human activities). Fe is particularly undesirable in water because it turns laundry materials brown due to precipitation of ferric oxides (Iron (III) Oxide).

Manganese (Mn): The concentration of Mn also exceeds the WHO standards for drinking water of 0.1mg/l. The values range from 2.21mg/l to 7.90mg/l for wells close to source (contamination) points and from 0.03mg/l to 3.02mg/l for wells far from source points. Mn is in association with Fe. Its mobility is dependent on anoxic conditions. Like iron, excess Mn in water stains laundry. The excess Fe and Mn concentration in groundwater may be removed by aeration (spraying the water into air, trickling it through beds of coarse stone or bubbling air into it), (Okeke and Igboanua, 2003).

Arsenic (As): The As concentration is relatively high and in most cases exceeds the WHO standard of 0.05mg/l for drinking water purposes. This can be judged from the fact that high As concentration can sometimes be found in water that contain appreciable Fe concentrations and from volcanic rocks of intermediate to acidic composition (Adelena et al, 2003). It commonly gives rise to black diseases. High iron concentration indicates the mobility of As under relatively anoxic condition. Shales are potential sinks for As (Moore and Ramamoorthy, 1984).

Lead (Pb): Particularly interesting is the high values of water samples taken close to mining/mine areas and brine pits. They range from 0.15mg/l to 4.00mg/l. While water samples taken far away have low values which does not exceed the WHO standard of 0.10mg/l. Possible sources may be naturally induced, from the rock-water interaction.

Copper (Cu): This range from 0.82mg/l at Jangerigeri to 1.97mg/l at Akwana saline. Low values were observed in hand dug wells. Possible sources could be the product of sulphate reducing reactions leading to the precipitation of copper.

Zinc (Zn): Zinc values are considerably lower in most locations except in Akiri area with 7.00mg/l. The WHO standard is 5mg/l. Zinc gives water a strong astringent taste.

Lithium (Li): Lithium occurred considerably high in most locations. The possible sources could be from the leaching from volcanic rocks.

Barium (Ba): Barium occurred considerably high in most locations. The content probably reflects the removal of the element from the water as it moves through the rocks. Strontium (Sr), unlike other trace elements, is more abundant in the more saline waters (Oteze, 1990). This actually collaborates with the values closer to the mine pits and brine areas. In general, (Uma, 2004) suggested a general source of these trace radicals to be largely of basinal brines and from mining activities in the area. Akande (1999) equally suggested basinal brines to be fluids responsible for the fracture filled deposits in the Middle Benue Trough.

The sources, distribution and mobilities of trace elements had been theoretically reappraised in the Middle Benue Trough. The area is generally characterized by basinal brines, mining activities volcanics. And these may be the possible sources of these trace elements. Mobility depends on anoxic condition prevalent in the area. Elemental concentrations of most trace elements (Table 1) exceed the WHO standard for drinking water (WHO, 1993). This likely occurs in areas where the depocenters occur.

Table 2. Elemental concentration of some common minor/trace elements (mg/l) from water sources in the study area. 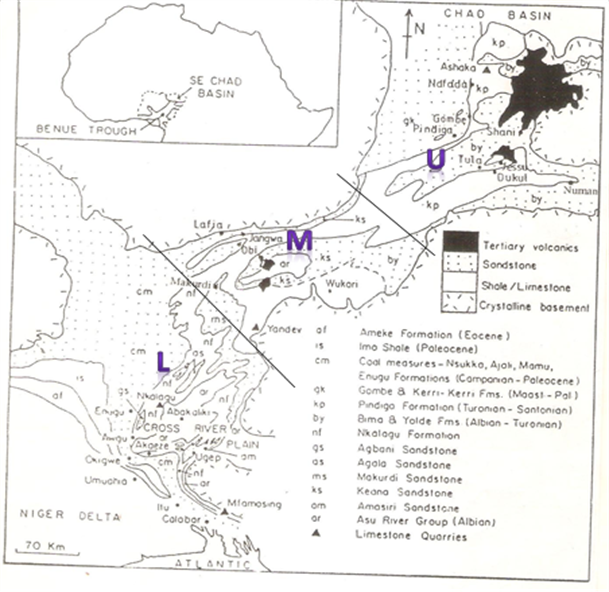 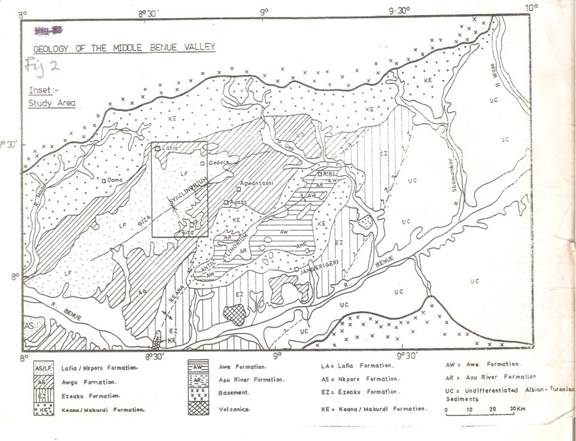 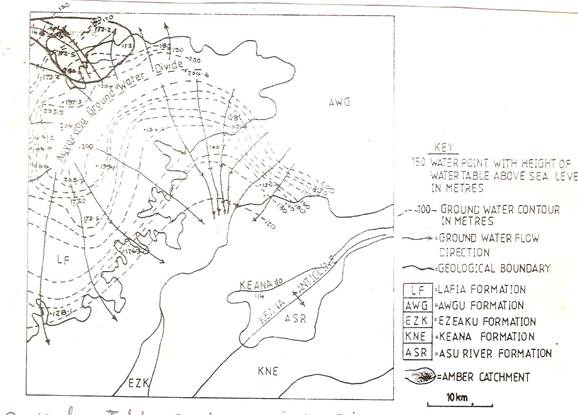