Development of Liquid Based Microemulsion Formulation for Transdermal Drug Delivery

Transdermal drugs or "patches" are preferred to oral drugs as it has pharmacological advantages over the oral route and improved patient acceptability and compliance. Salicylic acid being keratolytic is used on the skin to treat common skin diseases and foot warts. This study deals with the preparation of formulated gel using castor oil and salicylic acid. Formulation was prepared by mixing castor and nonyl phenol (surfactant). Evaluation of the formulated gel was observed for its appearance, homogeneity, pH, spreadability, drug content and antimicrobial activity. According to the obtained results, pH of castor with drug (6.9) was more efficient when compared to marketed gel (5.9), the formulated drug also showed good spreadability whereas, the drug content in marketed gel was more efficient. The formulations prepared i.e., castor oil alone as well as oil with the drug was found to be more effective and showed sensitivity towards certain bacteria and showed no effect towards fungal species. Therefore from the results obtained, formulated gel was more efficient than marketed gel.

Transdermal drug delivery system is considered to be one of the important routes for the delivery of drugs due to its advantages when compared with other modes of delivery [1]. Several transdermal drugs have been commercialised, which includes clonidine, estradiol, fentanyl, nicotine, nitro-glycerine, etc. [2]. Several formulations have been prepared for delivering these drugs to the system through the skin. Formulations such as cream, emulsion, gels, lotions, etc. are being used to improve the bioavailability of the drugs [3]. Emulsions, being the current area of research are being explored for its efficacy in delivering the drugs through the skin [4]. Different forms of emulsions are used for the delivery of drugs, of which microemulsions are used for the delivery of testosterone [5] and nanoemulsions are used for the delivery of caffeine [6] and progesterone [7]. Use of magnetic nanoemulsions in the form of photosensitizers is an innovative approach for treatment of cancer in the form of photodynamic therapy [8].

Castor oil has been used and recommended for its powerful medicinal and curative effects for centuries by physicians. This is considered to be one of the naturally occurring fatty oils and about 80-90% of the fatty acids contain ricinolic acid [9]. Castor oil has a wide range of applications in the field of medicine where they are used as skin moisturisers such as lotions for skin and for burns, as creams, gels and herbal preparations [10], in cosmetics [11], and also for controlled release [12]. A study was carried out at the Meridian Institute in comparing the absorption efficacy of castor oil when administered orally and transdermally. Their findings say that the absorption of castor oil through the skin is more efficient than the oral administration as the excretion of certain substances is eliminated.

About 20 ml of castor oil was taken. To this 10% of nonyl phenol was added which acted as a surfactant. The mixture was homogenized for about 30 mins. 10 ml of acidified water was added to the mixture. Acidified water was prepared by adjusting the pH of water to 4.3. After the addition of acidified water, initial homogenization was carried out for about 30 min. This was then followed by the final homogenization at a speed of about 1000 rpm for about 15 min. The obtained emulsion was then evaluated for different parameters.

2.2. Preparation of Formulation with Salicylic Acid

About 3% salicylic acid was used. The concentration of oil and the surfactant used are similar to the above prepared formulation. The drug was dissolved in methanol and loaded to the oil- surfactant mixture after the preliminary homogenization of about 30 mins. Then the addition of acidified water was carried out, followed by initial and final homogenization. Evaluation was carried out for the said parameters.

2.3. Evaluation Parameters for the Prepared Formulation

The prepared sample was visually observed for colour, lucidity, presence of any impurities as it plays an important role in patient acquiescence.

The sample prepared was then tested for homogeneity through visual observation for the presence of aggregates or any phase separation.

pH of the sample was determined using a digital pH meter. This was carried out by adding 2 gm of the prepared sample to distilled water upon stirring to get a uniform suspension. The final volume was made upto 50 ml and the pH was determined.

This was carried out using the apparatus fabricated by Multimer et al (1956) [15]. This was fabricated by fixing a glass slide to a wooden block and one end of the upper slide tied to the weight pan. The prepared sample was placed between the two slides and a weight of about 250 gm was placed on the slides for about 10 min to constrict the sample for obtaining uniform thickness. Weight was then added to the pan and the time taken to separate the two slides was observed to evaluate the spreadability. Spreadability was then calculated using the formula

Where, S is spreadability

L is length of glass slide

T is time taken to separate the two slide

About 1 gm of the formulation with salicylic acid was dissolved in methanol. The final volume was made upto 100 ml in a volumetric flask. This was stirred using a magnetic stirrer for about 1 hr for complete dissolution. The solution was then filtered through Whatmann filter paper. The absorbance was measured at 540 nm against a reagent blank.

Antibacterial and antifungal activities were carried out for the prepared formulation loaded with salicylic acid with that of marketed gel containing salicylic acid through well diffusion method. Muller Hinton agar was used. 100 µl of the sample, prepared formulation and the marketed sample was loaded into the agar wells. Bacterial cultures of Bacillus and Micrococcus were used and fungal cultures like Candida krusie, C. tropicalis, C. albicans, Trichophyton rubrum and T. mentagrophytes were used. This was carried out in triplicates.

Castor oil is obtained from the seeds of the plant Ricinus communis, having several medicinal uses such as, skin treatment, constipation problems, arthritis, nasopharyngeal allergies, treatment of warts, moles, cysts and boosting immunity. Castor seeds have triglycerides known as ricinolein. The oil obtained from the dehulled seeds has no trace of ricinolein, hence non toxic. Lymphocytes are the immune system's disease-fighting cells and are produced and stored mainly in the lymphatic tissue, which is a major factor leading to inflammation and disease. As castor oil is absorbed through the skin, the lymphocyte count increases, thereby recovering the immune system. Castor oil microemulsion was developed for enhancing the bioavailability of clarithromycin, which has a poor bioavailability due to first pass metabolism. The results of this study showed that the oral bioavailability of clarithromycin was increased on loading the drug within the castor oil microemulsion [16]. In another study carried out, castor oil was used as a self emulsifying drug delivery system for improving the solubility and bioavailability of telmisartan (hypertensive drug with poor solubility and poor bioavailability). The results of this study showed a 100% release of the drug even upto 120 mins and also the bioavailability of the drug was shown to increase [17].

Salicylic acid, being a monohydroxybenzoic acid is obtained from the willow tree. Like castor oil, salicylic acid is also known for its curative effects. It is known for its ability to ease aches, pains and reduce fevers. It is also used as an anti-inflammatory drug. Similar to other hydroxy acids, salicylic acid is a key ingredient in many skin-care products for the treatment of seborrhoeic dermatitis, acne, psoriasis, calluses, corns, keratosis pilaris, acanthosis nigricans, ichthyosis and warts. Since salicylic acid works as bacteriostatic and keratolytic agent, it causes the cells of the epidermis to shed more easily and neutralizing bacteria within, preventing pores from clogging up. Keeping the above benefits of both salicylic acid and castor oil in view, the formulated gel was prepared and compared to marketed gel.

The formulations prepared i.e., castor oil alone as well as oil with the drug were observed to be cream like without any aggregation and impurities. This is important regarding patient compliance as it is better applying castor oil cream rather than oil directly. No phase separation was observed as the oil was thoroughly homogenized with the surfactant and the drug. pH of the samples were determined and was observed to be slightly towards the neutral, since product with high acid levels have harmful effects on skin so products with neutral pH is preferred. The pH of formulated gel (6.9) was neutral compared to the pH of marketed gel (5.9) which was acidic, making these formulations acceptable for skin applications.

Spreadability is considered as an important attribute for topical preparations and also time important with regards to patient compliance. A formulation is considered to be good if it requires minimum to spread on the surface [18]. Hence, these values indicate that small amount of shear is sufficient for easy spreading. The values obtained for the prepared formulations were observed to have a good spreadability. The amount of drug loaded into the formulation was evaluated and was observed to be 75.2%, whereas for marketed gel, it was observed to be much higher (96%). Although the formulated gel had lower drug content, better results were observed with respect to pH and spreadability compared to that of the marketed gel.

The formulated gel containing salicylic acid and castor oil was studied for its in vitro antibacterial and antifungal activities. Zone of inhibition on the bacterial and fungal cultures of formulated gel, was significantly higher compared to that of marketed gel. The results of antimicrobial activity for the prepared formulation with salicylic acid and the marketed gel are tabulated. The zone of inhibition against different bacteria and fungi are tabulated. From the obtained results it was observed that the formulation prepared from castor oil and salicylic acid was more sensitive to organisms such as Bacillus, Micrococcus, C. Krusie and C. tropicalis as the zone of inhibition with formulated was higher (6.3, 23.6, 11 and 18) when compared with that of marketed gel (5.2, 14.0, 10). Thus from the obtained results, study suggest that the formulated gel could be used in treating diseases caused by the test organisms.

Table 1. Evaluation parameters of prepared formulations and the marketed gel.

Figure 1. Antibacterial activity of castor oil (a), castor oil with drug (b), and marketed gel (c) against Bacillus (A) and Micrococuss (B). 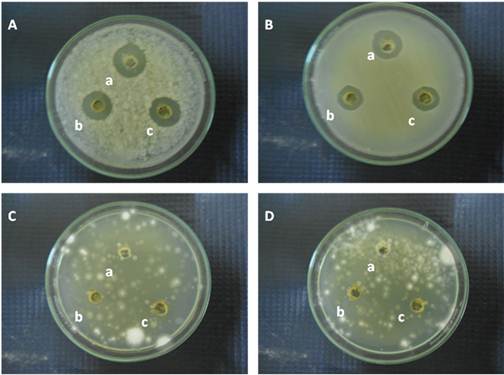 Table 2. Zone of inhibition for different organisms with the prepared formulation and the marketed gel.

All experiment were performed in triplicates and the results are expressed as mean±S.D (n=3) 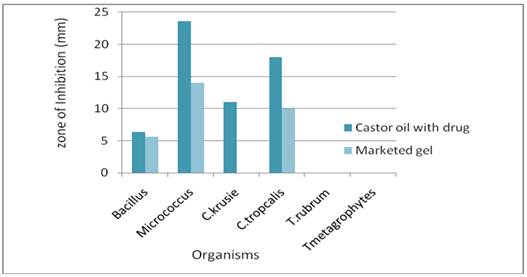 Figure 3. Comparision of zone of inhibition of prepared formulation and the marketd gel against different orgamisms.