1Department of Human Nutrition, the University of Agriculture, Peshawar, Pakistan

A case control study was conducted to determine the risk factors associated with gastroenteritis in children 2-5 years of age at Rehman Medical Institute Hayatabad, Peshawar during Oct, 2014 to Feb, 2015. A total of 200 children mothers (100 cases and 100 controls) were interviewed regarding socio-demographic variables, anthropometric measurements, mother’s knowledge and approach during disease, hygiene and sanitation status. Data was analyzed by SPSS and standard chi-square test was applied on categorical data to establish an association between the variables at 5% level of significance; t-test was used for quantitative data analysis of mean comparison. The results showed that 44% of children with gastroenteritis had low socioeconomic status, 25% children had family income <12000 rupees. Nutritional status of children showed that 10% controls and 27% cases were severely malnourished. Wasting was recorded 3% in controls and 10% in cases. The percentage of underweight was 27% and 35% in controls and cases respectively. Stunting was found lower in controls (26%) and higher in cases (46%). Significant difference was found in height for age, mid upper arm circumference and weight for height z-score. Odds ratio (OR) for the association of gastroenteritis with joint family structure was 3.11 (95% CI 1.736-5.594), weight for height z-score was 3.593 (95% CI: 958-0.863), weight for age z-score was 1.456 (95% CI: 0.796-2.661), age of complementary feeding <6 months was 2.405 (95% CI: 1.233-4.689), child eating picked stuff 3.977 (95% CI: 2.180-7.256), child admitted in hospital 1.860 (95% CI: 1.008-3.432), child who does not washed hand before meal was 0.288 (95% CI: 0.164-0.677) and child who does not washed hand after attending washing were 0.288 (95% CI: 0.161-0.517). It was concluded that low socioeconomic status, parental education, malnutrition, poor hygiene and inappropriate complementary feeding are associated with gastroenteritis.

Gastroenteritis is the inflammation of gastrointestinal tract exemplified by a combination of abdominal pain, cramping, nausea, vomiting, diarrhea and dehydration. It may be acute or chronic as acute gastroenteritis usually lasts less than 14 days, while chronic gastroenteritis lasts among 14 and 30 days [1]. It can have an effect on individuals of any age and is a major health hazard [2]. Chronic gastroenteritis is the most widespread cause of childhood mortality [3]. Diarrhea stays one of the most common illnesses in children around the world [4]. Gastroenteritis is primarily caused by viruses, but protozoa, bacteria and helminthes may also be the cause in developing countries [5]. In developed countries almost 87% of the acute gastroenteritis is caused by virus and of which rotavirus is the most common. In infants 40% of the cases of diarrhea are attributed to rotavirus globally. Rotavirus was responsible for almost 145,000 deaths each year in Asia, with the maximum numbers taking place in India, Pakistan, and Indonesia. An estimated 1 in 40 infants experience a severe episode of rotavirus gastroenteritis annually in Pakistan [6]. Breastfeeding is thought to be protective factor against gastrointestinal infections [7]. Zinc supplementation along with ORS is found to be highly effective in the management of acute gastroenteritis [8,9].

In acute diarrhea excessive fluid and electrolyte losses leads to dehydration and acidosis which is the main cause of death. By providing fluid on time and replacing electrolytes losses greater part of deaths are preventable. Other direct outcomes of gastroenteritis in children in developing countries are malnutrition reduced growth and impaired cognitive development [10]. Acute gastroenteritis is the main cause of morbidity in developed countries [11]. Malnutrition raises the occurrence and severity of diarrhea and other infections [12]. The basic reason for malnutrition is diarrhea changing from minor to severe and children suffer from loss of appetite, food restriction and malabsorption syndrome [13].

Most important risk factors associated with gastroenteritis are diarrhea, and its occurrence remains a remarkable burden on children in low and middle income countries [14] due to various elements [15] like child malnutrition [16] low socioeconomic status and low education of mothers [17,18] lack of safe drinking water, inadequate sanitation and poor hygiene [19,20] crowding [21] and low maternal age [22]. Moreover, diarrheal incidence turn down as a child grows older is greatest in the first two years of life, environmental factors and hospitalization [23] and unemployment [24]. The behaviors that promote gastroenteritis are lack of hand washing after defecating and before food handling [25].

Rotavirus gastroenteritis is passed on through the fecal oral means [26]. Other modes of transmission may include indigestion of food and water infected by fecal matter, person to person contact, or direct contact with feces [27]. It can also be transmitted through respiratory droplets and hands [28]. Some studies reported that contaminated food and water are responsible for 70% of all cases of diarrhea [29,30]. Sometimes the basis of gastroenteritis are inappropriately cooked food or reheating of meat, dairy, seafood, bakery products and non-infectious causes may include poisoning with heavy metals like arsenic and cadmium [12]. Unhygienic and unsafe environment put children at risk of death [31]. In children with acute gastroenteritis breastfeeding should be sustained at all times, even during the initial rehydration phase. On the other hand widespread contradictions about lactose-free or lactose-reduced formulas are found but do not have to be removed and usually are needless. Banana, rice, apple, toast, cereals and potatoes diet should be offered [32]. Probiotics builds an improved equilibrium in intestinal micro flora and promotes best possible health and are very useful in reducing and preventing the length and severity of illnesses related to diarrhea [33].

The approval for conducting the study was taken from the Chief Executive of the Rehman Medical Institute Peshawar. Pediatric ward of hospital was used as a platform for enrolled subjects. Children admitted in Pediatric ward were interviewed for different risk factors associated with gastroenteritis through standard questionnaire. The subjects meeting the inclusion criteria of cases were enrolled for the study and informed consent was obtained prior to their enrollment.

A questionnaire was used to collect data regarding socio-demographic variables, anthropometric measurements, and assessment of different risk factors associated with gastroenteritis in children.

Demographic and socioeconomic characteristics of the subjects such as family type, education, monthly income, occupation were assessed by interviewing the subjects and recording their responses in the questionnaire.

Parents of the subjects were asked about different symptoms associated with gastroenteritis and their response was recorded in questionnaire. Mothers of subjects were interviewed about their child’s feeding history such as breastfeeding, weaning food, type of milk, mother’s approach when child gets diarrhea and care imparting behavior of mother. They were also asked about their sanitation and hygiene status such as source of drinking water, hand hygiene and garbage disposal.

Data was entered into the Statistical package for social sciences (SPSS) for error checking and statistical analysis. Descriptive statistics including mean, median, frequency, and standard deviation were determined and checked for distribution of the data to apply appropriate statistics. Standard chi-square test was applied on categorical data to establish an association between the variables at 5% level of significance; t-test was used for quantitative data analysis for mean comparison. Odds ratio was applied to estimate the relationship between risk factors and gastroenteritis.

3.1. Socio Demographic Characteristics of the Children 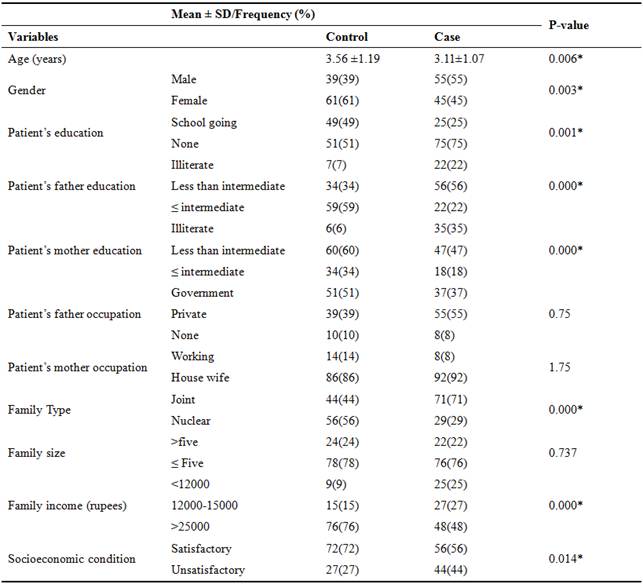 3.2. Anthropometric Measurements of the Subjects

3.3. Nutritional Status of the Subjects

The study suggest that on the basis of MUAC severely malnourished children were 10% and 27%, moderately malnourished 11% and 20% and healthy were 79% and 53% in control and cases group respectively. According to WHZ, wasting in children was recorded 3% in control and 10% in case group. The percentage of underweight children in control and case group was 27% and 35% respectively. Stunting was found 26% in controls and 46% in cases whereas 74% of the children in control group were normal and 54% in case group and significant difference was found in Height for age z-score, MUAC z-score and Weight for height z-score while non-significant results were observed in Weight for age z-score. Mwangome et al. (2011) revealed that severe malnutrition was found in 13% of cases, moderate in 21% and healthy were 66% on the basis of MUAC in gastroenteritis patients and observed significant difference (p= 0.001) between three categories of MUAC which is partially similar to our findings [43]. Augistina et al. (2013) reported that 32% children showed stunting, 19% underweight and 12% wasting and significant difference of (p<0.005) was found between three variables [41]. Nitiemia et al. (2011) considered that 31% children with gastroenteritis suffered from stunting [44]. Opintan et al. (2010) conducted a study on Pediatric diarrhea in Southern Ghana and reported that weight for age z-score <-2 in 16.7% cases and 10% controls showed underweight, weight for height z-score <-2 in 22% cases and 6.3% controls showed wasting and height for age z-score <-2 in 37.2% cases and 14.3% controls showed stunting in gastroenteritis children [45]. 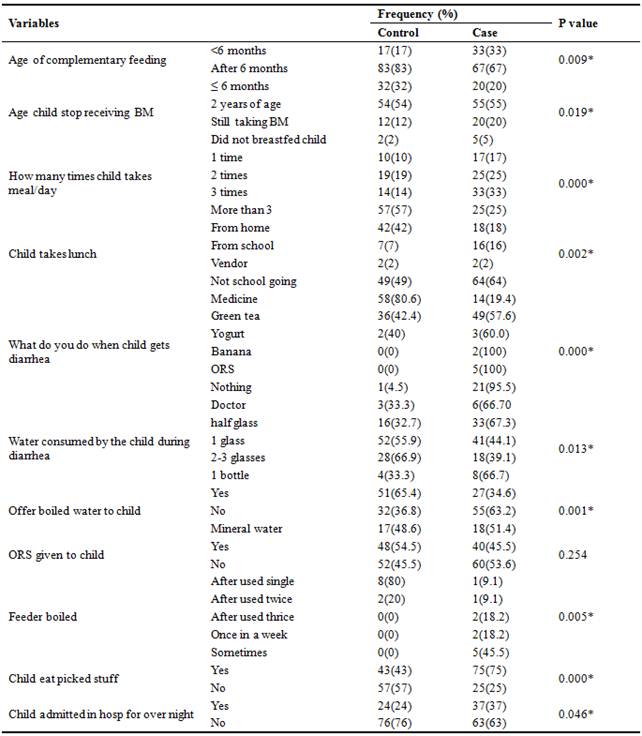 3.5. Risk Estimation of Socio-economic and Nutritional Status of the Children

Table 5. Risk Estimation of Socio-Economic and Nutritional Status of the Children. 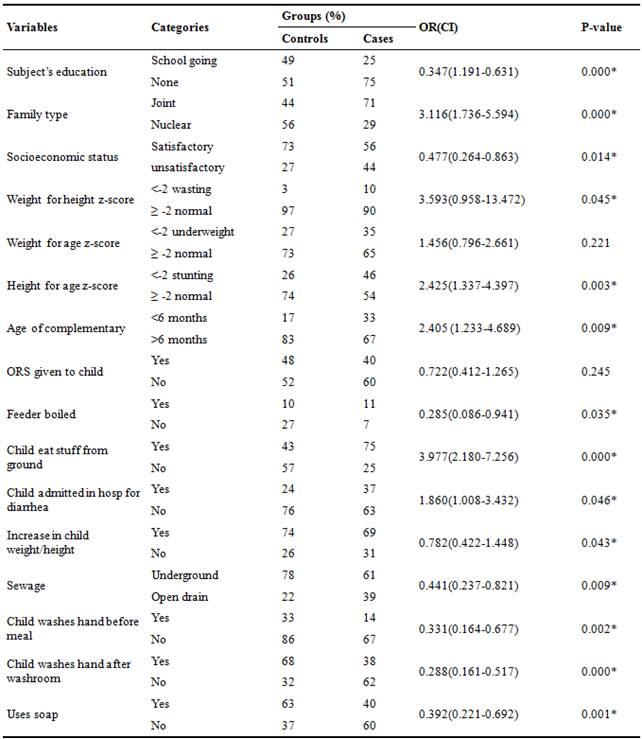 Low socio economic status, poor hygiene and sanitation practices, malnutrition and low parental education leads to gastroenteritis (GE). Mother’s improper health care practices and knowledge regarding GE can increase the diarrheal complications. Good hygiene and better sanitation conditions can reduce the spread of disease. Mother’s care imparting behavior to the child during GE and knowledge about disease and management can reduce the severity of the disease.