Modern society today tend to have a fast-paced lifestyle and instant, included in the diets. Langseth (1995) states that the improper diet will lead to long-term accumulation of free radicals in the body. Free radicals can also be caused by the metabolism of the body and outside the body, such as cigarette smoke, environmental pollution, radiation, drugs, pesticides, as well as ultraviolet radiation. A free radical is a compound or molecule having one or more unpaired electrons in its outer orbital. The presence of unpaired electrons cause the highly reactive compound looking for a partner by attacking and binding electrons in the molecules in the surrounding areas (Winarsi 2007). Macromolecules are attacked can have conditions that cause oxidative damage to proteins, DNA, premature aging, cancer, heart attack (Middleton et al. 2000), cataracts, and skin diseases, and other degenerative diseases (Reyneston 2007). Damage caused by free radicals in the body can be treated with antioxidants.

Antioxidants are chemical compounds that can donate electrons to free radicals they contain to inhibit or prevent oxidation of the substrate is easily oxidized (Middleton et al. 2000). The human body naturally produces endogenous antioxidant that is able to overcome the effects of free radicals, but when the supply of free radicals increased supply of antioxidants needed from outside (exogenous). Exogenous antioxidants can be obtained in the form of synthetic (man made) or natural. Synthetic antioxidants for example benzoic acid, BHA (Butylated Hydroxy anisole), BHT (Butylated Hydroxy Toluene) and TBHQ (Tertiary Butylated Hydroxy Quinones) can cause side effects on health because it is carcinogenic. Results wichi research (1988) shows the BHA and BHT can cause tumors and liver damage in long-term use. Concerns about adverse effects that result in natural antioxidant potential to be developed. Natural antioxidants can be obtained from fruits or herbs. The herbs contain secondary metabolites such as flavonoids and phenolics that can catch free radicals (Duenas et al. 2009). One of the plants with the potential to be developed as a source of natural antioxidants derived from mangrove ecosystems.

Mangrove is a plant that thrives in coastal areas that have the potential of bioactive compounds is very high. Indonesian territorial waters with very broad (2/3 of the total area) and tropical climate is the ideal place for the growth of mangroves. Indonesia is a country that has the largest mangrove forest in the world, with an area of mangrove forests around 3.5 million hectares (Noor et al. 2006). There are 202 species of mangrove species that have been identified in Indonesia. Mangrove plants have been screened their activities, as antiviral, antibacterial, antibisul, and anti-inflammatory (Agoramoorthy et al., 2008; Premanathan et al. 1999). One alternative source of natural antioxidants is a leaf lindur (Bruguiera gymnorrhiza).

Lindur plant in Indonesia spread in Java, Sumatra, Kalimantan, Maluku and Bali (Duke and James 2006). Fruit lindur Tual widely used by people in the district of Sulawesi as a source of carbohydrate substitute for rice when the famine as well as drugs to treat eye diseases and herpes (Haq et al., 2011). Bark is used to treat diarrhea and malaria in the Solomon Islands (Allen and Duke in 2006), while its leaves are used to treat burns (Haq et al., 2011). Lindur leaves suspected to contain bioactive components that are very useful for the body and potentially used as a natural source of antioxidants because it has been used as a traditional medicine in the community, but still not enough information to explain these things scientifically. The purpose of this study was to determine the bioactive compounds, antioxidant activity and total phenolic extract coarse leaf lindur.

The main material used in this study is the leaves lindur (B. gymnorrhiza) derived from the old Mangrove Conservation Area in Pantai Indah Kapuk, North Jakarta (Figure 1). Other materials were used that material for proximate analysis, material for phytochemical test, test ingredients for antioxidant activity by DPPH method, and materials to test the levels of total phenols. Material for analysis of antioxidant activity that is crystalline 1,1-diphenyl-2-pycrlhydrazil (DPPH), ethanol, and vitamin C. Material for analysis of total phenol that is 95% ethanol, distilled water, reagent Folin Ciocelteau 50%, 5% Na2CO3, and a solution standard (gallic acid). 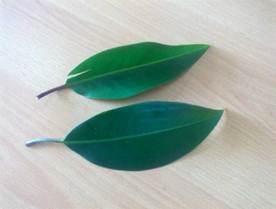 Lindur dried leaves showed an increase by 3.7% ash content compared to fresh lindur leaves. Wibowo et al. (2009) states that the level of ash content can be caused by differences in habitat or the environment is different. Each organism also has a different ability to regulate and absorb minerals so that it will also affect the ash content value of each ingredient.

Lindur leaf protein levels change proportionally from 4.45% to 8.19% after drying. Lindur fresh leaves contain protein in relatively small amounts, but tend to be higher than the protein content of other fresh mangrove leaves. Vegetable food materials generally have lower protein than animal food (Muchtadi and Fitriyono 2010).

Crude fiber content in the leaves dry lindur higher by 9.29% compared lindur fresh leaves. Muchtadi (1993) stated that the fiber content in foods can be altered by processing conducted on the original material. The fiber content in the plants will generally experience increased due to the heat treatment. Overall, the leaves have dried lindur ash, fat, protein and crude fiber is higher than in the leaves of fresh lindur. This is due to the drying process on the dried leaf samples lindur According Muchtadi and Fitriyono (2010), with the drying process reduces the moisture content and result in materials containing compounds such as proteins, carbohydrates, and minerals in higher concentrations.

Lindur leaf extract is done in stages with the type of solvent that has a different polarity. Lindur leaf extraction performed by maceration for 48 hours until the resulting filtrate translucent color. The extract obtained in the form of a thick paste with different colors depending on the type of solvent used. N-hexane extract greenish yellow color, while the ethyl acetate extract and methanol respectively green and red-brown. The color change that occurs in the n-hexane extract in accordance with the results of Ismail et al. (2012), which showed a clear color change to yellow, it indicates nonpolar component extracted by solvents which allegedly is a carotenoid pigment.

The green color of the ethyl acetate extract showed the pigment chlorophyll. Chlorophyll is generally bind to the protein and fat can be extracted with a solvent which has a low polarity level (Harborne 1987). Red-brown discoloration on the methanol extract is also consistent with the results of Ismail et al. (2012) believed to be the anthraquinone pigment. Estraksi with different types of solvent extract also produce different yields. The yield of leaf extract lindur with each solvent are presented in Figure 2. 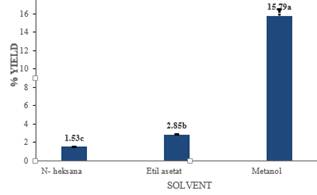 The yield on the smallest of n-hexane extract of 1.53%, while the yield of the total of the methanol extract of 15.79%. This is in line with the results of research Salama et al. (2008) which showed that the extract yield results different maceration using a greater percentage yield different.

Phytochemical analysis results showed positive results in the third extract their steroid. Steroids found on the third leaf extract lindur allegedly functions as a stamina enhancer. The assumption is reinforced on the antioxidant activity of the extract n-hexane weak (> 200 ppm). Third lindur leaf extract also showed the presence of phenol hydroquinone. Phenol compounds tend to be readily soluble in water and non-polar compounds as generally binds to sugars as glycosides and is usually found in the cell vacuole (Harborne 1987).

Flavonoid compounds found only in the methanol extract and ethyl acetate extract. This is because it is influenced by a polar solvent in extracting flavonoids. According to Middleton et al. (2000), flavonoids are the active compounds are included in this type of intermediates of antioxidants, which act as hydrophilic and lipophilic antioxidants. Phytochemical analysis results showed the methanol extract tannin. According to Harborne (1987), tannins can react with proteins to form copolymers strong and mostly insoluble, except terkondenasi tannins that can be extracted with methanol. Phytochemical analysis results also indicate the presence of saponins in ethyl acetate and methanol extracts. Saponins are surface active compounds and are like soap. Saponins can be detected by their ability to form foam and menghemolisis blood cells (Harborne 1987). Results of research Homhual et al. (2006) showed that the bioactive components contained in B. gymnorrhiza consisting of phenol compounds, flavonoids, steroids, sulfur content, and components terpenoids. 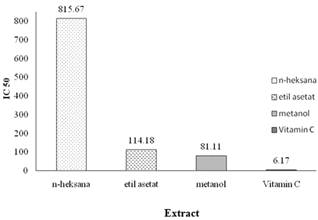 The overall results show that the difference in the solvent in the extraction process affect the antioxidant activity of the extract. Values obtained antioxidant activity is still very low compared to the results of research Haq et al. (2011) with IC50 values of 0.038 ppm ethanol extract and extract of methanol and chloroform respectively 0,027 ppm and 0.28 ppm. The low IC50 values obtained in this study may be due to the extraction time is too long.

Determination of total phenolic content can be done using the Folin-Ciocalteau principle is based on the oxidation-reduction reaction. The content of total phenols expressed in GAE (gallic acid equivalent). Total phenol content of each extract are presented in Table 3.

Kubota et al. (2000) suggest that differences in levels of total phenolics in plants caused by nutrients, habitats and different varieties. Folin-Ciocalteu reagent reacted with phenolic compounds will cause the color changes from yellow to blue green.