Boerhaavia diffusa belonging to the family of the Nyctaginaceae is one of the renowned medicinal plants used to treat large number of human ailments. The present study deals with the investigations of phytochemical analysis and evaluation of the cytotoxocity, anthelmintic and analgesic activities of methanol extract of the plant. The results of preliminary phytochemical screenings revealed that the extract contains alkaloids, steroids, flavonoids, tannins, gums, carbohydrates and glycosides etc. The cytotoxic activity of plant extract on brine shrimp napulii increase in mortality with increased concentration which suggests the presence of possible antitumor, antibacterial and pesticidal agents. The anthelmintic activity was performed by observing the time of paralysis and the time of death of earthworms Pheretima posthuma compared with the standard drug, albendazole which confirmed the presence of significant anthelmintic activity of B. diffusa. The analgesic potential of the extract was evaluated using acetic acid induced writhing response, tail immersion and hot plate test to understand the central analgesic activity in mice (Swiss albino mice) at 200 mg/kg and 400 mg/kg doses. The results of these tests showed potential analgesic activity of the extract which is comparable to the standard drug, diclofenac Na. Thus, the obtained results provide a support for the use of this plant for medicinal purposes.

Boerhaavia diffusa L. is an herbaceous perennial member of the family Nyctaginaceae. It is widely distributed in the tropics and subtropics. It has long-petioled broadly ovalate leaves, greenish purple, stiff, cylindrical stems and small white flowers on long stalks [1]. It has a long history of uses by indigenous and tribal people and in Ayurvedic or natural herbal medicines. The genus Boerhaavia has 40 species and is distributed in the tropical, subtropical, and temperate regions of the world. It is found in Australia, China, Egypt, Pakistan, Sudan, Sri Lanka, South Africa, USA and in several countries of the Middle East. B. diffusa is also indigenous to India. It is found throughout the warmer parts of the country upto an altitude of 2000 m in the Himalayan region. The plant is also cultivated to some extent in West Bengal. In Bangladesh the plant grows all over the country. It has many ethno-botanical uses (the leaves are used as vegetable; the root juice is used to cure asthma, urinary disorders, leucorrhoea, rheumatism and encephalitis) and is medicinally used in the traditional Ayurvedic system. Punarnava is an herb which is very useful for curing kidney diseases [2].

The fresh plants were collected from Dhaka, Bangladesh during September, 2014 and identified by the taxonomist of the Bangladesh National Herbarium, Mirpur, Dhaka. An accession number was given from there and a voucher specimen (DACB: 41278) has been deposited in the herbarium for future reference. The shade dried and powdered plant material (100gm) was soaked in 300ml of methanol for 10 days and then the extract was filtered through a cotton plug followed by Whatman filter paper number 1 and then concentrated by using a rotary evaporator at low temperature (40-50°C) and reduced pressure.

In brine shrimp lethality bioassay, vincristine sulphate and in anthelmintic activity test, albendazole is used as standard drug. For analgesic activity test, diclofenac Na (5mg/kg) in writhing test, diclofenac sodium (5mg/kg) in tail immersion and hot plate test is used as standard drug. Diclofenac Na was orally administered intraperitonially to the mice. The mice in control group received vehicle (water) at the dose of 0.1 ml/mouse 30minutes before experiments. Methanol extract of the plant was administered to the test groups 30 minutes before experiments at the doses of 200 and 400 mg/kg body weight in all cases for the determination of analgesic activities.

The methanolic extract of B. diffusa were tested for the detection of alkaloids, glycosides, carbohydrates, proteins, flavonoids, saponins, tannins and steroids with standard procedures [5]. 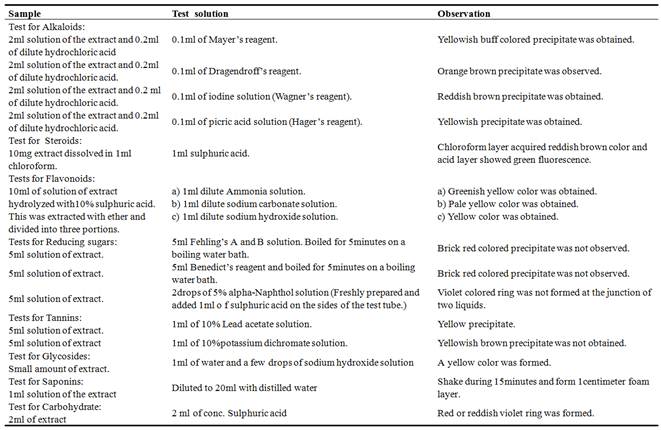 Brine shrimp lethality bioassay technique stands superior to other cytotoxicity testing procedures because it is rapid in process, inexpensive and requires no special equipment or aseptic technique. It utilizes a large number of organisms for statistical validation and a relatively small amount of sample. Furthermore, unlike other methods, it does not require animal serum [6].

Brine shrimp eggs are hatched in simulated sea water to get nauplii. Test samples are prepared by dissolving in DMSO and by the addition of calculated amount of DMSO, desired concentration of the test sample is prepared. The nauplii are counted by visual inspection and are taken in vials containing 5ml of simulated sea water. Then samples of different concentrations are added to the remarked vials through micropipette. The vials are then left for 24 hours and then the nauplli are counted again to find out the cytotoxicity of the test agents.

Fresh juice extract of B. diffusa were dissolved in minimum amount of DMF and the volume was adjusted to 10 ml with saline water. All drugs and extract solutions were freshly prepared before starting the experiment. In each case, 6 earthworms released into 10 ml of desired formulations as follows:

Vehicle (5% DMF in normal saline), Albendazole (25 mg/ml, 50 mg/ml, 100 mg/ml), Fresh juice extract of B. diffusa in normal saline solution containing 5% DMF (25 mg/ml, 50 mg/ml, 100 mg/ml). Observation was made for the time taken to paralysis and death of individual worm. Paralysis was said to occur when the worms were not able to move even in saline solution [7].

Pain has been officially defined as an unpleasant sensory and emotional experience associated with actual or potential tissue damage. Pain acts as a warning signal against disturbances of the body and has a proactive function [8].

The acetic acid induced writhing method is an analgesic behavioural observation assessment method that demonstrates a noxious stimulation in mice. The test consists of injecting the 0.7% acetic acid solution intraperitoneally and then observing the animal for specific contraction of body referred as ‘writhing’. A comparison of writhing was made between standard (diclofenac Na), control and test sample given orally 30 minutes prior to acetic acid injection. Five minutes after the injection of acetic acid, the mice were observed and the number of writhing was counted for 10 minutes. If the sample possesses analgesic activity, the animal that received the sample, will give lower number of writhing than the control, i.e. the sample having analgesic activity will inhibit writhing [9].

The animals of the control, standard and test groups were treated with diclofenac Na (5 mg/kg body weight), water (0.10 ml/mouse) and test samples at the doses of 200 and 400 mg/kg body weight respectively. 1 to 2 cm of the tail of mice was immersed in warm water kept constant at 55°C. The reaction time was the time taken by the mice to deflect their tails. The latent period of the tail-flick response was taken as the index of antinociception and was determined at 0, 30, 60, 90 and 120 min after the administration of the test drugs and standard [10].

The paws of mice are very sensitive to temperature at 55±0.5°C, which are not damaging to the skin. The animals were placed on Eddy’s hot plate kept at a temperature of 55±0.5°C. A cut off period of 15 sec was observed to avoid damage to the paw. Reaction time was recorded when animals licked their fore or hind paws, or jumped at 0, 30, 60, 90 and 120 min after oral administration of the samples. The animals of test groups received test samples at the doses of 200 and 400 mg/kg body weight. Positive control group and vehicle control group were treated with diclofenac Na (5 mg/kg b.w.) and 1 in water (0.1 ml/mouse) respectively [11].

Table 2. Results of Different Chemical Group Test of the methanol extract of B. diffusa.

Following the procedure of the lethality, the Methanol extract of B. diffusa to brine shrimp was determined and the summary expressed in a Table 3.

The plant extract of B. diffusa showed potency to toxic activity against brine shrimp nauplli with LC50 value of 0.25 µg/ml when compared with the standard vincristine sulphate (0.812 µg/ml). Comparison with positive control vincristine sulphate the plant extract signifies potent cytotoxicity. The lethal concentration LC50 of the test samples after 24 hr. was obtained by a plot of percentage of the shrimps killed against the logarithm of the sample concentration (toxicant concentration) and the best-fit line was obtained from data by means of regression analysis. The regression analysis data is given in the table 4.

Table 5. In vitro anthelmintic activity of B. diffusa.

The analgesic effect of B. diffusa on acetic acid-induced writhing in mice was determined. The extract significantly inhibited writhing response in a dose dependent manner and was comparable to the reference drug, diclofenac Na.

Figure 1. Bar diagram showing the result of writhing test for methanol extract of B. diffusa.

A dose dependent reduction in the number of abdominal constriction was observed in animals treated with different concentration of methanol extract of B. diffusa at the dose of 200 mg/kg and 400 mg/kg, inhibition of writhing response was observed 22.17% and 66.50% respectively for plant extract.

The analgesic activity test was carried out in the laboratory on five groups of mice by tail-immersion method. Time interval for the test was 30 minutes. The tail withdrawal reflex time after administration of the B. diffusa was found to increase with increasing dose of the extract.

Table 7. Effect of B. diffusa on tail withdrawal reflex in mice.

Figure 2. Effect of B. diffusa on tail withdrawal reflex in mice.

Table 8. Effect of B. diffusa on hot plate test. 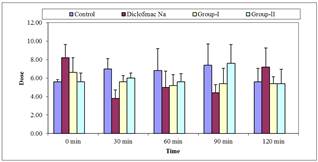 Figure 3. Effect of B. diffusa on hot plate test in mice.

The hot plate test was widely used for assessing central antinociceptic activity. In this experiment, B. diffusa exhibited higher analgesic activity than diclofenac Na in hot plate test. It seems possible that the higher doses of the extract have more potent analgesic effect.

Based on the result of the present study, it can be concluded that the crude plant extracts of B. diffusa possesses cytotoxic effect, anthelmintic activity and remarkable analgesic potential. Various phytochemical constituents like glycoside, alkaloid, tannin, saponin and carbohydrate present in the plant, as evident from phytochemical analysis. Significant cytotoxic activity can be suggested from the results of brine shrimp lethality bioassay. Anthelmintic activity test showed potent anthelmintic effect of the plant extract. The plant extract showed satisfactory analgesic properties compared to respective standard drugs. At higher dose, notable analgesic activity was observed from acetic acid induced writhing test, hot plate and tail immersion test. Dose dependant activity was also identified by all the performed pharmacological investigations.

The authors are grateful to the authority of Stamford University Bangladesh for necessary funding and logistics support.