Zinc and copper are vital elements for growth, reproduction and development which are components of some cellular enzyme and play an important role in the stabilizing of some cellular membrane. The aim of this study was to investigate the association between intestinal parasites and serum levels of zinc and copper in children of Duhok City/Kurdistan Region in Iraq, because despite the significant recent advances in the knowledge of the molecular biology and biochemistry of E. histolytica little is known about the pathogenesis of Entamoebasis and there relation with these two elements in Duhok City. The study started from 12/2014 to 8/2015. In this study a total of 15 infested and 31 non-infested persons as a control group were selected from total 44 samples. Stool samples were collected from all cases and controls and examined for detection of cyst and/ or trophozoite of Entamoeba and Giardia from each patient with 5 ml blood sample was obtained for estimation of zinc and copper. In this study, serum zinc levels in infected children were significantly lower when compared with healthy children, it was found a decrease level in serum zinc in 50% of cyst and/ or trophozoite of Entamoeba positive group, but copper level showed no statistical significant difference in comparison with healthy children. It has been concluded that intestinal parasites affect the level of serum zinc in testes children during present study.

Intestinal parasites are one of the major public health problems which are wide prevalence among children under 10 years of age. These parasites drainages the mucosal portion of the intestinal surface and disturbs the natural food absorption barrier in the gut. In severe cases it produces steatorrhea and malabsorption, growth retardation and may also affect the mineral absorption with many other physical and mental health problems in children (Kim., et al 2003). In 2002, WHO, found that the number infected people with digestive tract parasites at 3.5 billion and the number by is expected to be 450 million (WHO, (2002).

Zinc and copper are essential for normal human development and functioning of body. Zinc is an essential trace element, an important antioxidant (Russo and deVito 2011) in spite of not being a free radical scavenger, and a metalloenzyme required for the catalytic activity of more than 300 enzymes (Prasad, 2012). It plays a necessary role in immune system which helps in the production of antibodies, T-cell and other blood cell activity, protein synthesis, cell replication, cell division, tissue repair and growth through (Prasad, 1995), wound healing (Heyneman 1996). It has an important role in the nucleic acid metabolism and DNA synthesis (IOM/FNB, 2001) which play functional role in the nucleic acid polymerases (Azza., et al 2015). Zinc is required for proper sense of taste and smell, supports normal growth and development during pregnancy, childhood, and adolescence (Simmer and Thompson 1985, Fabris and Mocchegiani 1995 and Prasad et al. 1997). Zinc is part of a very large number of transcription factors, far more than the number of Zn-containing enzymes that are known (Oteiza and Mackenzie 2005, Prasad, 2012)

Prolonged Zn deficiency may therefore cause growth impairment (Sandstead et al. 1967, Prasad 2012). A child who is born with decreased Zn stores will remain at risk for Zn deficiency throughout childhood (Faber et al. 2009). Zinc is naturally present in some foods, is added to others, and is available as a dietary supplement (Lifschitz 2012).

Copper is an essential element that is widely distributed in the food and water that are required in the production of red blood cells, hemoglobin formation, iron absorption and a component of various metalloenzymes activity including ferroxidases, cytochrome oxidases, amino oxidases, superoxide dismutase, ascorbic acid oxidase and tyrosinase Copper and zinc are cofactors of cytosolic superoxide dismutase, and their decreasing levels affect the activity of cytosolic superoxide dismutase. It has been reported that serum level of copper and zinc were shown to be decreased in children with chronic Entamoebasis and giardiasis (Olivares., et al 2003) that can cause iron anemia, growth retardation with many physical and mental health problems (Abbaspour., et al 2014). Karakas et al. showed the concentration of zinc was lower in those children at a high prevalence of giardiasis when compared with normal children (Karakas., et al 2001). Infants and young children may have more susceptibility to giardiasis because of behavioral of poor hygiene, low levels of education & immunological factors (Robertson., 2000), it is easily transported by direct feco-oral contact, drinking of contaminated water (Lengerich., et al 2001), food or by abnormal sexual practices (Bean., et al 1996 and Kal., et al 1984) and poor sanitation (Ratanapo., et al 2008 and Hesham., et al 2004).

The present study was aimed at investigating the serum levels of zinc, copper in children with intestinal parasites in Duhok City.

The study is carrying out at the outpatient in Hive Lab in Duhok City and Research Center of College Science and Biology Department in University of Duhok in Duhok province/Kurdistan Region/Iraq. Stool samples was taken from 44 children (Randomly from admitted to the Hive Hospital and outside) from 12/2014 to 8/2015 and a total of 15 infested and 31 non-infested persons as a control group were selected from total samples. Blood sample was taken from each child for estimation serum zinc and copper.

Samples were collected from infected children with intestinal parasites and healthy one as a control group in a sterile clean cups labeled with patient's serial number and date of collection. Then parasitological examination was immediately processed. Examination of fecal samples for detection cyst and/ or trophozoite of Entamoeba and Giardia were done by stool examination direct wet smear (saline & iodin).

Samples of stool were examined for identification of trophozoites and/or cysts of Entamoeba histolytica and G. intestinalis by a wet mount of fresh specimen through a direct saline and preparation. Stools samples were concentrated for examination by using formalinethyl acetate sedimentation technique and stained with acid-fast staining for cryptosporidiosis and cyclosporiasis. Fresh and concentrated slides were prepared from specimens, pieces of 22×40-mm cover-glass has been used. The entire areas of cover-glass using a magnification of 10×, 40 × and 100x objectives examined for identification of trophozoites and/or cysts parasites (Tietz, 1986). Stool cultures for these specimens were done, but no bacteriologic pathogens were detected in the examined slides.

Blood samples were collected from cases and control group then placed in non-heparinized dry gel centrifuge tubes and was allowed to clot at room temperature for about 30 minutes then were centrifuged at 3000 rpm for 15 minutes. Serum samples were placed in Eppndorf tubes for the determination of serum Zinc (Zn) and copper (Cu) levels by full automated chemistry analyzer (Cobas Integra-400 plus-Roche/Germany) in Dr. Amer medical lab in Duhok City. This apparatus estimates the Zinc and copper depending on their regents kits (Roche/Germany) that include: absorbance for each one.

Data for the zinc and copper results in all cases collected and analyzed statistically by using excel and GraphPad Prism 5 through using analysis of variance (ANOVA) followed by Turkey test, each control group was compared with infected group then results were expressed as mean ± standard division (SD) and P-values < 0.05 (donated as *) were considered as a statistical significant.

In the present study, serum zinc levels were lower during protozoan infections in children when compared with healthy children, but copper level showed no significant difference in comparison with healthy children. In the stool of infected children, we found a decrease in zinc levels in 50% of cyst and/ or trophozoite of Entamoeba positive group with no obvious changes in the copper level. 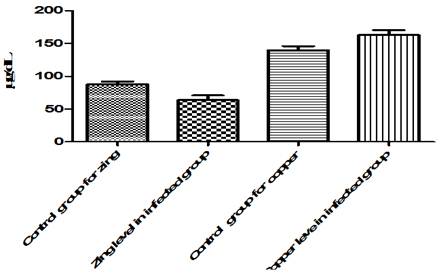 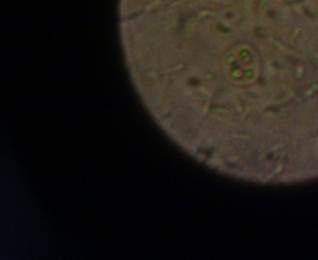 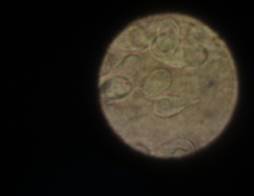 Serum zinc levels were significantly lower during protozoan infections with no significant changes in copper level in the serum tested children in Duhok City, these results are in agreement with the finding of Mustafa et al., 2003 where they estimated serum zinc and copper levels and in children with chronic Giardiasis in Turkey (Mustafa., et al 2003).  Zynep., et al 2001. Others reported there is changing in serum trace elements levels in Entamoebasis with significant decrease in zinc levels and no obvious changes in copper levels (Tanyuksel., et al 1995 and Demirci., et al 2003). However other study found that there is no significant difference in serum levels of these minerals in healthy and infected children with Entamoebasis (Devlin, 2009).

The combination of parasitic factors with host responses was found to be related with the pathogenesis of Entamoebasis and Giardiasis (Azza., et al 2015 and Farthing, 1997). It has been found that the Entamoebasis intestinal releases cytopathic substances that cause damage to the intestinal surface epithelium. This condition in the small intestine produces malabsorption for different nutrient particles and also malabsorptions of the minerals particularly zinc which might produces pronounced stealorrhea (Samra., et al 1988). In this it was observed that the surface drainage of epithelium of the small intestine could be the main reason for zinc deficiency in infected children which causes subsequently the health problems.  However many other additional factors were found to be related with the changes of serum level of zinc and copper in children infected with Entamoeba histolytica: of them inflammatory lesions in the intestinal mucosa layer caused by the parasite was suggested to be also reason for malabsorption of the minerals. Others suggested that coverage of the epithelial surface in the small intestine with parasites inhibits the direct contact of zinc with the cells, the weakness of the antioxidant system during Entamoebasis infection was found to be other factors that consequently cause the imbalance between the oxidant-antioxidant homeostasis towards the oxidative side and impairment in cellular and enzymatic functions. All of these factors need early and proper treatment performance to avoid free radical effects with other health problems in patients with chronic giardiasis (Mustafa., et al 2003, Ertan., et al 2002 and Ali., et al 2015).