Pesticides are used to control various kinds of pests and boost agricultural production in order to cope with the demands of the market. However, when pesticides are used indiscriminately, they pose danger and risk to human health (Fenik et. al., 2011).

The study was conducted in Benguet which is the largest vegetable producer in northern Philippines. The province produces major agricultural crops such as leafy vegetables, stems and flowers, tubers, roots and bulbs. It has a land area of about 2,599.4 km2 with an estimated 27.5 thousand farms and 30 thousand hectares of agricultural land. (BAS, 2013). This is the first documented study on trending of pesticide residue in the local area.

This study is a comparative analysis of two sampling periods (2008 and 2010) of residues in agricultural soil and crops in Benguet, Philippines.

Samples of soil and crops were collected using cluster sampling technique in eight communities of Benguet which are engaged in commercial agriculture. Fifty one samples were collected in 2008, and 52 samples in 2010. Table 1 shows the average distance of sampling per community. The samples collected were submitted for multi-pesticide residue analysis using gas chromatography. 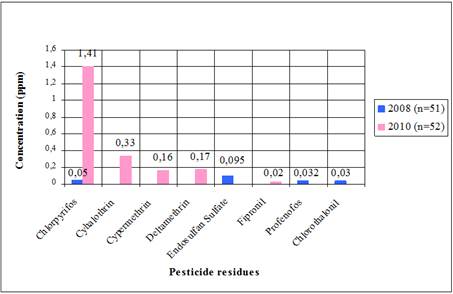 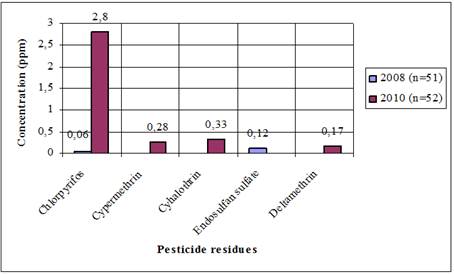 Only chlorpyrifos was the residue detected in both years (Figure 1). This is similar to the study of Zhang et al. (2012) wherein endosulfan residues were detected in agricultural soils in China.

Of all the crops sampled in 2008, cabbage had the highest concentration of pesticide residues (Figure 3). This was followed by celery. For cabbage, the pesticide residue detected was profenofos. For celery, the residues detected were chlorpyrifos, t-endosulfan, deltamethrin, and cyhalothrin. This was found to be similar in the study of Chen et. al. (2011) in China where pesticide residues were most frequently detected in cabbage, legumes, and leaf mustard. In the study of Osman et. al. (2011), pesticide residues found in vegetable samples in Saudi Arabia exceeded the maximum residue level (MRL) in cabbage, squash, green pepper, carrots, cucumber, lettuce, eggplant and tomato. The vegetable with the highest contamination rates were cabbage followed by carrot, cucumber, green pepper, squash, lettuce, tomato and eggplant. 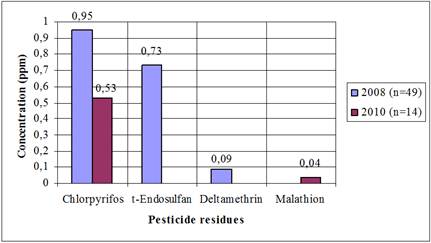 Figure 4 shows the distribution of exceeded pesticide residues in crops. Chlorpyrifos yielded the highest average exceeded concentration in both 2008 and 2010. The average concentration of exceeded chlorpyrifos residue detected in 2008 was higher than that in 2010. The other residues that exceeded the MRL were t-endosulfan and deltamethrin in 2008, and malathion in 2010. Pesticide residues were also exceeded in the study of Latif et. al. (2011) in cauliflower, green chilli, eggplant, tomato, peas, bitter gourd, spinach, and apple gourd in Pakistan. In Brazil, carbendazim and chlorpyrifos residues in apple, papaya, sweet pepper, and strawberry (Jardim and Caldas, 2012) were found. In Northern Greece, chlorpyrifos was the most frequently detected insecticide in peaches (Caldas et al., 2011).

In regard the type and the amount of pesticides detected, this can be linked to the change of targets among commodity producers based on the increase in the demand for these products.

Table 2. Comparison of Consumer's Pesticide Exposure to the Allowable Daily Intake of Each Pesticide Residues in 2009.

A general default MRL of 0.01 mg/kg applies where a pesticide is not specifically mentioned. http://ec.europa.eu/food/plant/pesticides/max_residue_levels/eu_rules_en.htm

**Acceptable Daily Intake (ADI) was based on EU Pesticides Database

Table 3. Comparison of Consumer's Pesticide Exposure to the Allowable Daily Intake of Each Pesticide Residues in 2010.

A general default MRL of 0.01 mg/kg applies where a pesticide is not specifically mentioned. http://ec.europa.eu/food/plant/pesticides/max_residue_levels/eu_rules_en.htm

**Acceptable Daily Intake (ADI) was based on EU Pesticides Database

Tables 2 and 3 compare the exposure of the consumers to the allowable daily intake (ADI) of each detected pesticide residue. As shown below, all the residues posed risk to consumer’s health in both 2008 and 2010 sampling periods.

One significant aspect in the process of analyzing the impact of pesticide residue to human health is to estimate the risk associated with dietary intakes of pesticide residues by the consumer. The detected residues are compared to the maximum residue level. If residues are found to exceed the maximum residue level, it is necessary to compare this level to the acceptable daily intake and the theoretical maximum daily intakes to assess the consumer's risk (Nasreddine and Parent-Massin, 2002).

As shown in the data in Tables 2 and 3, the residues detected posed risk to consumer’s health. In the study of Bhanti and Taneja (2007) on health risk analysis associated with pesticide residues, it was found that methyl parathion posed risk to human health while chlorpyrifos and malathion did not. In another study, the fruit diet of infants and children were found to exceed the allowable concentration for carbaryl, diazinon, and methidathion in apple, strawberry, and orange (Gebara et al., 2011). In China, the pesticide residues that exceeded the MRL in market vegetables were omethoate, phorate, chlorpyrifos, methidathion, and ethoprophos (Wang et al., 2013). In Colombia, acephate was found in tomatoes and it exceeded the recommended MRL (Bojaca et al., 2011).

The study showed that pesticide residues were found in the agricultural soils and vegetable crops in Benguet, Philippines in both 2008 and 2010 sampling periods. Certain residues exceeded the maximum residue level and this signifies that there is risk to the environment and the human health. The study also analyzed the link between pesticide residues in vegetable crops and the acceptable daily intake of consumers. It is recommended that pesticide residue monitoring will be carried out continuously in this province, It is significant to conduct educational programs for farmers on the control and safer use of pesticides. Regulatory policies on pesticides should also be done to protect farmers’ and consumers’ health.