Four new mixed ligand complexes of Ni(II) have been prepared. The complexes were characterized on the basis of elemental analyses, conductivity measurements, magnetic measurements, infrared spectral and some physico-chemical analysis. The complexes showed strong to moderate activity against both the gram positive and gram negative bacteria indicating the higher zone of inhibition.

Amino acids are the basic building blocks of all proteins. Proteins are the most abundant biological macromolecules, occurring in all organ and cells. The monomers of amino acids that are covalently linked to each other in sequence by peptide bonds. This chain-linked structure is called a polypeptide or simply a peptide. Proteins exhibit enormous diversity of biological function and are the most important final products of the informal pathways. These are the molecular instruments through which genetic information is expressed. The biological importance of the amino acids includes specific functions involving the metabolism of individual amino acids.

The increasing interest in metal-amino acid [1-3] and peroxo-metal system [4-5] mainly attributable to their potential as models for understanding biological important molecules [6-9] promoted us to establish rational synthetic routes of metals complexes containing an organic acid and amine bases as coligand.        Amines are common ligands in all of the present complexes the heterocyclic amines, although they contain tertiary nitrogen, coordinate readily with metal ion. Most of the heterocyclic amines are used as corrosion inhibitor [10-12] and their complexes with platinum and copper have been tested as antitumor [13] and antibacterial agents [14]. Studies on the metal complexes of heterocyclic amine bases have been carried out by many other workers and thus confirmed the complexation ability of amine with metal [17-20].

In continuation of the previous work [21-23] we herein report the synthesis, structural and antimicrobial activity of four new mixed ligand complexes of Nickel(II) containing glutamic acid as primary and heterocyclic amines as secondary ligands.

All the reagents and chemicals used were reagent grade and were used as supplied.

The weighing operation was performed on a METTLER PM-200 electronic balance. Conductivity measurements were carried out in dimethyl sulfoxide (DMSO) using a WPACMS 35 conductivity meter and dip-cell with a platinized electrodes. The melting or decomposition temperatures of all the prepared metal complexes were observed in an electro thermal melting point apparatus model No.AZ6512. The SHERWOOD SCIENTIFIC Magnetic Susceptibility Balance was used for the magnetic Susceptibility measurement. Infrared spectra as KBr disc were recorded in a SIMADZU FTIR-8400 (Japan) infrared spectrophotometer, from 4000-400 cm-1. The absorbances of the complexes were recorded on SHIMUDZU Spectrophotometer. Analyses of the complexes for carbon, hydrogen and nitrogen were carried out by Perking 2400 organic elemental analyzer- II at Okayama University, Japan.

3. Preparation of the Complexes [Co(Glu)(L)]

Where, Glu= Glutamic acid, and L = Heterocyclic amine bases such as Pyridine, Quinoline, Isoquinoline, and 2-Picoline.

An ethanolic solution (just dissolved) of Nickel(II)chloride (2 m mol) and ethanolic potassium hydroxide solution (just dissolved) of glutamic acid (4 m mol) were mixed and gently heating with stirring for half an hour. No precipitate was observed but the color has been changed and then secondary ligand in calculated ratio was added and stirred in warm condition until the complex precipitated. The precipitate was filtered, washed several times with alcohol and then dried in vacuum desiccator over phosphorus pentoxide (P2O5).

Figure in the parenthesis indicates the calculated values.

Table 5. Zone of inhibition of antifungal activity of test complexes.

Prominent features of the IR spectra of the complexes are tabulated in the Table 4. The complexes display bands in the regions 1604-1682 and 1324-1456 cm-1 due to n(C=O) and n(C-O) respectively, significantly lower than that of free ligand n(C=O) = 1700 cm-1 and n(C-O) = 1600 cm-1 respectively indicating the coordination of ligand through its carboxylate anion. The symmetric stretching of COO- frequencies is observed at 1410-1545 cm-1. The disappearance of the n(O-H) mode observed in the free amino acid molecule clearly indicate the loss of proton for O-H group upon coordination, revealing that acids are dinegative bidentate ligand coordinating through the carboxylate anion. The complexes showed n(N-H) bands from 3200-2850 cm-1 which is significantly lower than the free ligand (amine base bands from 3300-3200 cm-1) clearly suggests the coordination of amino group through nitrogen atoms of amine bases. The in-plane and out-of-plane ring deformation modes of heterocyclic amines observed at 680 and 620 cm-1 respectively undergo a positive shift in mixed ligand complexes confirming their coordination through nitrogen. The presence of metal nitrogen bonding in the complexes is evident from the appearance of n(M-N) modes at 440-478 cm-1 in the spectra of the complexes.

5. Zone of Inhibition of Antifungal Activity of Test Complexes

The antifungal activity of the test complexes against different fungi were investigated by using the doses of 80 µg/ disc, where standard antibiotic disc of Nystatin (45µg/ disc) was used for comparison purpose. The diameter was evaluated 13 mm, 11 mm, 9 mm, 10 mm against tinea pedis, 13 mm, 10 mm, 10 mm, 10 mm against asperigillus niger, 15 mm, 14 mm, 11 mm, 11 mm against Conlitotrium sp., respectively for test complexes [Ni(Glu)(Q)3], [Ni(Glu)(IQ)3], [Ni(Glu)(Py)3], and [Ni(Glu)(2-Pico)3] whereas diameter of zone of inhibition of Nystatin was found to be 20 mm, 26 mm, 22 mm respectively against the organism. The antifungal activity (zone of inhibition) of the test complexes against respective fungai is presented in Table-5.

6. The Result of Antibacterial Activity of Test Complexes

The antibacterial activity of the test complexes were determined by using the dose of 80 µg/disc. The results of antibacterial activity measured in terms of zone of inhibition is shown in Table-6. The complexes showed minimum sensitivity against the following number of both gram positive and gram negative bacteria and the results were compared with antibiotic disc of kanamycin.

It is concluded that the analytical data were in good agreement with the proposed empirical formulae of the complexes. Magnetic susceptibility measurements showed the complexes to be paramagnetic. The IR spectral data indicated the ligand coordinate to the metal through O and N atoms. The electronic spectral data are in conformity with the transitions of octahedral Ni(II) complexes. On the basis of the above investigations and other physical interpretation the probable molecular structure of the complex [Ni(Glu)(Py)3] could be illustrated as shown below (Figure-1): 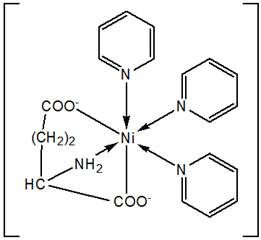