The influence of Li2O and humidity on structural and electrical properties of TiO2 ceramics are presented for two different concentrations (0.02 and 0.06 mol%). The X-Ray analysis shows a single phase compound for 0.02, due to the Li incorporation into the rutile, while the pattern for the 0.06 composition shows two phases. The structural effects are corroborated by Infrared Spectroscopy where the vibrational modes are discussed for each composition. The electrical behavior is also shown at room temperature and for each composition using a.c. measurement. The effect of Li2O addition on water adsorption mechanism as well as the humidity sensibility is analyzed. An equivalent circuit, from impedance spectroscopy, is proposed and the physical processes that take place inside the ceramic are described.

In recent years, ceramic humidity sensors are widely used for monitoring and controlling in domestic and industrial environments. In comparison with other materials, they present most thermal stability and chemical resistance, superior sensing properties and high mechanical strength [1-6]. In order to improve sensing properties in ceramics the doping is a procedure widely used. It can result in the incorporation of dopant in the crystalline structure and/or in segregation of secondary phase producing ceramic composites [4, 6-15]. The doping effects on the humidity sensitivity can be either by enhancing electrical parameters (changing resistance and capacitance) or/and by optimizing microstructural characteristics (open porosity). Many humidity sensor material have shown a better response sensitivity when Li-doped the material [6, 9, 13-15] in comparison whit other cations (H, Na, Cs).

As a ceramic sensor, TiO2 is very attractive because of its high efficiency, stability, and low cost [3, 6, 9, 16-18]. Water absorption on TiO2 rutile is an interesting example of a simple surface chemical process with significant applications.

Recently, we reported the electrical behaviour for xLi-TiO2 (0≤x≤0.02 in mol %) at middle temperature range [19]. For this concentration range, the rutile is the only system phase. In the present work, the structural and electrical properties of Li2O-TiO2 system are examined for two concentrations at room temperature. Lithium and water effects on the rutile is analysed by ac measurements with the Impedance Spectroscopy technique. Employing this technique, the humidity effects in porous system have been widely reported by monitoring the ac conductivity [6, 8, 13, 17, 20, 21]. The role of each part of the material in the electrical conduction process can be determined on the basis of measurements and an equivalent circuit model.

The samples were prepared by a conventional solid state reaction process. The raw materials used were analytical grade TiO2 (Merck) and Li2O (Merck). The molar composition used in TiO2-x mol% Li2O are x=0.02, namely TL2, and x=0.06, namely TL6. The ceramics powder was characterizes by X-Ray Diffraction (XRD) analysis (Rigaku Rotaflex RU200B using CuKα radiation) and Fourier Transformed Infrared (FT-IR). Pellets with 10 mm diameter and 1.5 mm thickness were elaborated by pressed under 154 MPa. The green samples were then sintered in air according set in table 1. The relative density (RD, in % of Theory Density) was obtained by Archimedes technique and listed in table 1. Impedance Spectroscopy (IS) measurements were performed at 60 % of relative humidity (r.h.) using a HP4194A impedance analyzer with silver electrodes in the ceramic parallel faces.

In according with XRD analysis, figure 1, for composition x = 0.02 (TL2) no other phase beside TiO2 rutile was observed. For TL6, the XRD pattern shows that ceramic sample include TiO2 rutile and Li2Ti3O7 phase. For concentrations until x=0.02, Li incorporation mechanisms via interstitial only, by computational simulation [22], and mixed (interstitial and substitutional), by experimental techniques [19], have been reported. 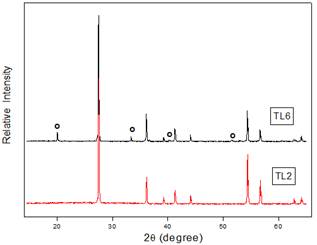 The structural parameters are shown in the table 1. Slight variations in the parameters are observed and, given the experimental error, can us conclude that the Li incorporation doesn't change the cell parameters significantly.

Li incorporation in rutile for interstitial mechanism has showed a strong preference into octahedral site. Li should then incorporate in TiO2 according equation (1). Conservation of overall charge neutrality under insertion generates an electron for each Li+ ion positively charges. This charge compensating electrons can be localized at Ti ions creating Ti 3+ states.

The relative density for both samples is showed in table 1. Bigger relative densities are observed with regard to the pure TiO2 sintered with approximately similar conditions. This demonstrates that both Li incorporation in the structure and the Li2Ti3O7 phase favours the sintering processes. This is contrary to the necessary open porosity for optimal sensing performance.

In the far FT-IR spectrum, see figures 2(a), the multipeak appearing at 2800-3100 cm-1 assigned to the stretching vibration of hydroxyl group, which is confirmed by bending modes poorly observed in the expected region. The multipeak is consistent with the bond of acidic H+ ions with octahedral oxygen observed in oxides with protonic conductivity. 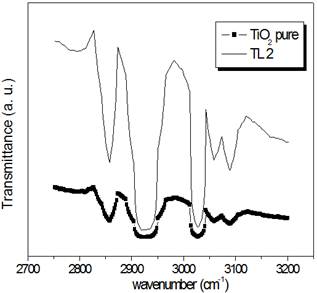 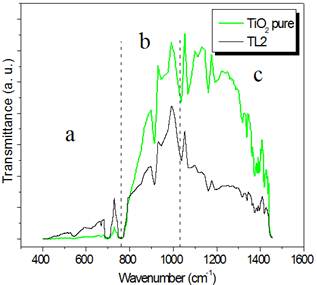 Figure 2. Far (a) and middle (b) FT-IR spectrum of TL2 compared with TiO2 pure. In (b) tree regions are displayed.

The figure 2(b) shows the middle FT-IR spectrum. The spectrum can be analysed in three regions which reveal the following facts:

i)    The modes in region a can be assigned to titanium octahedraly coordinated to oxygen in TiO6 octahedral in the rutile structure. The very broader modes for TL2 indicated that the Li insertion in the rutile can cause more disorder in the structure.

ii)   The bands in region b (800-1050 cm-1 ) usually can be appear for deformation vibration of metal-OH bonding as well as bending motion of bound H2O.

In the ii) and iii) the intensity decreasing of the TL2 peak may be by light absorption by free carrier coming from Ti3+.

Figure 3 shows the IS spectra for TL2 and TL6 samples. These shows only one semicircle ascribed to a grain surface contribution; therefore, the electrical properties are determined more by the grain surface characteristics than by other regions. The sample conductivity is obtained for the intercept of the semicircle with the real axis. As it is observed in the figure 3, the TL2 superficial conductivity is increased with relationship to the TL6.

The Li doping can increase the number of water chemisorption site due to the formation of a higher number of surface defect sites and strong local electrostatic field performing it in good polarise: dissociate sites for water molecule [2]. On the other way, the presence of the Li2Ti3O7, which doesn't present the TiO2 humidity-sensitivity characteristic, reduces the surface composition with high activity of water absorption/dissociation and therefore the charge carried number is reduced increasing thus impedance.

In order to a better understanding of the physics process that take place in the material, we obtained the equivalent circuit (EC), see figure 3. The parameters of each fitting were determined using a non-linear least-square fitting algorithm [24]. The values and the physical meaning of the EC element are presented in the table 2. 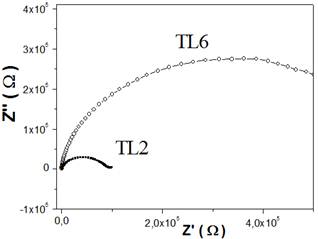 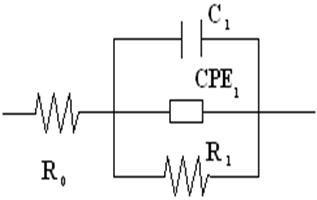 Figure 3. Impedance Spectroscopy for TL2 and TL6 samples at 25 oC and 60% r.h. and equivalent circuit.

The Li ions intercalated inside the structure will provide more mobile charge and thus contribute to electrical conduction increasing Ro. The Li addition also increases the number of water adsorption sites in the surface and, correspondingly, the interfacial polarization which is reflecting in the value of the superficial capacity C1 listed for TL2. The relaxation times, τ=RC, for the semicircles in both samples is approximately the same. This can suggest the same interfacial polarization mechanism. The higher water adsorption and their surface protonic conduction, originating from hydronium, enhances the surface conduction, displayed in decreasing of R1 for TL2.

To interpret the conduction, polarization and diffusion processes that occur in a ceramic material in the presence of water molecules, the IS and a.c. measurements were usually used [7, 8, 17, 18, 21]. But in several of these works an EC not is proposed. In contrast, in our work the explanation and comprehension of the EC and their circuit elements values is showed. The relation between the EC elements and the physical behavior observed for specific conditions in the present study allow a better interpretation and understanding of the different processes involved.

The structural and electrical characteristics of Li2O-TiO2 system in presence of water at room temperature were studied. The obtained experimental results confirm that doping is a way of changing material behavior. The Li incorporation increases the structural disorder as well as generates free charges that produce changes in the vibration bands intensities of the hydrated rutile.

The electrical effects observed can be explained by the doping mechanism and it is depends strongly on the Li incorporation. The equivalent circuit for electrical response is presented which allows to better understanding the diverse charge transport and relaxation mechanisms.