Contents
1. Introduction 2. Materials and Methods 2.1. The state of Processor 2.2. Synthesis Method of Nano-Sized ZnO 2.3. Set up Description 3. Results and Discussion 3.1. Effect of Bed Diameter 3.2. The Effect of Amount of Input Mercaptan 4. Conclusions

Sulphur compounds in fuels such as liquefied petroleum gas cause problems on two fronts: they release toxic gases during combustion process, and they damage metals and catalysts in engines and fuel cells [3]. They usually are removed using a liquid treatment that adsorbs the sulphur compounds from the liquefied petroleum gas, but the process is cumber some and requires that the hydrocarbon be cooled and reheated, making the fuel less energy efficient [4]. To solve these problems, researchers have turned to solid metal oxide adsorbents, but those have their own sets of challenges [5]. While they work at high temperatures, eliminating the need to cool and re-heat the fuel, their performance is limited by stability issues. They lose their activity after only a few cycles of use [6].

Sulphur in hydrocarbon cuts has different forms such as element sulphur (S) (H2S), COS, CS2, RSH (mercaptans), thiophene, and other sulphur compounds. Meanwhile, nano catalysts are adapted in this paper to vanish mercaptan as the side element, corrosive and pyrophoric contaminant. For this purpose, DMD process has been developed as a de-mercaptanization process providing the possibility of demercaptanization of different hydrocarbon cuts even crude oil as a feed.

Previous studies found that sulphur compounds adsorption works best at the surface of solid metal oxides [7]. So, the authors set out to create a material with maximum surface area. The solution seems to be tiny grains of zinc oxide nano particles, uniting high surface area, high reactivity and structural integrity in a high-performance sulphur adsorbent [8]. Zinc Oxide has been numerously used for removing of sulphide compounds from liquefied petroleum gas streams in processes like reforming [9,10], integrated gasification combined cycle [11] and fuel cell [11,12,13]. Although, ZnO has been well evaluated with sulphide compounds feed stocks, the performance of zinc oxide nano structure with different operating conditions and structural characteristics in mercaptan removal has not been specially evaluated in details. This work is devoted to using experimental design methodology and different configurations of ZnO to identify the optimum conditions for mercaptan removal by nano zinc oxide catalysts. Clearly, the nano-sized ZnO is more reactive than the same material in bulk form, enabling complete sulphur removal with less material, allowing for a smaller reactor. The nano particles stay stable and active after several cycles [10].

The liquefied petroleum gas must first be treated with a solution of chemical sorbents that are dissolved in water. That solution must then be heated up and boiled to remove the sulphide compounds, in order to prepare the sorbent for future use. Once the sulphide compounds are boiled off, the sorbent is then cooled and ready for use again. The repeated heating and cooling requires a lot of energy and markedly reduces the efficiency of the process, scientists say.

In the adsorption process by nano Zinc Oxide, sweetening of liquefied petroleum gas is occurred with minimum heat flux comparing with the other sweetening methods. Also, approximately, 70 to 80 percentage of the initial amount of mercaptan is removed from the liquefied petroleum gas by the proposed adsorption process. Also, Zinc Oxide catalyst is produced due to feasible method and is not expensive comparing with the other catalysts. So, this method is beneficial. Undoubtedly, the zinc oxide nano particles as sorbents have large active surface. So, they can be reused again and again. This method will be developed as soon as possible and will be applied in industrial scale.

In this work, a fixed bed reactor is set up which is equipped by nano zinc oxide catalysts. Some experiments have been held to investigate the effect of different configuration of nano sized zinc oxide particles. In addition, the effect of various operating pressures, temperatures, catalyst diameters, bed heights on the performance of mercaptan removal is evaluated. Also, the capability of nano catalysts is surveyed toward changing the amount of mercaptan in feed stream. The results are illustrated as the ratio of outlet mercaptan concentration per inlet mercaptan concentration. In addition, this work contains the cost estimations for the various operating pressures and temperatures. Consequently the optimum conditions are introduced.

2.1. The state of Processor

The important feature which is considered is to improve the adsorption efficiency of sulphur compounds from hydrocarbon fuels such as LPG by applying the zinc oxide as nano catalyst. Zinc oxide nano particle is a common ingredient and has a huge variety of applications. In addition, zinc is an essential mineral and is non-toxic in low concentration [11]. 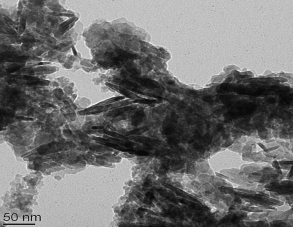 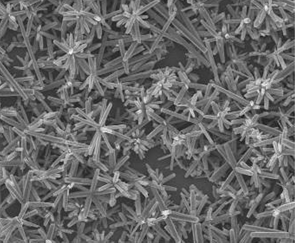 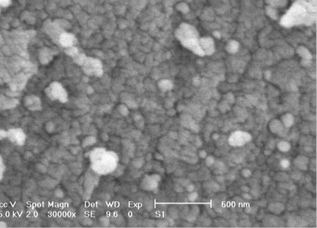 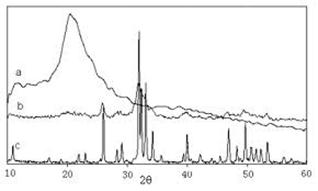 Zinc metal is used to make a solution containing one molar

ion. At first, this solution is purified, and then a type of surface-active reagent (zinc acetate dehydrate) 0.05 M is added. At the next step, approximately, 10% of ethanol is added under the ultrasonic conditions. The produced solution is agitated for 25 to 30 minutes. The obtained solution will be homogenised after this time interval. Same reagents are added to

, 1M solution under the same conditions. Then another surface active reagent (folic acid) is added. The solution is agitated for 30 min again. In the next step, filtering and washing of the solution is done several times by ethanol and distilled water alternately under the ultrasonic action, diameter of nano particle can be adjusted in this step by changing in the ultrasonic time duration. The produced substance is prepared to dry for fifty minutes at 80

in size are observed approximately and finally the crystal is pure zinc oxide with hexahedral structure. Figure 1) a, b and c show TEM and SEM photos of produced nano particles. In addition Figure 1 d). shows the XRD of synthesised nano particles.

One laboratory cylindrical vessel equipped with the nano-sized ZnO catalytic fixed bed is applied for mercaptan adsorption process, in this work. The process temperature is adjusted by one steam jacket around the vessel.

Anyone knows, the sulphide compound is corrosive and toxic, severely. Meanwhile, this component is in several industrial. We know the current technologies use huge resources of energy for removing the mercaptan component.

The effect of variations of bed diameter on the mercaptan removal is shown in correlation 1 for spherical and cylindrical zinc oxide nano particles.

The larger diameter of bed results the lower amount of mercaptan in the outlet stream for both cylindrical and spherical type. Using catalytic bed diameter of 4 cm, 5 cm and 6 cm are all meet the mercaptan specification below the 0.6 ppm when cylindrical type is used. However, the amount of

is higher than 0.6 ppm just in 4 cm diameter of bed (0.086). Results indicate on the positive effect of the increase in the value of mass transfer area on the sulphur elimination from LPG due to the increase in the bed diameter. The lower bed diameter indicates on the lower amount of nanoparticle and lower cost of preparation of bed. 4 cm and 5 cm is considered the optimum diameter of bed for cylindrical and spherical type of catalyst, respectively. The changes in the amount of

are not considerable at higher diameter of bad than 5 cm, for both types of nanocatalyst at constant flow rate. This may relate to the appeared flow regime since of the changes in the area toward the feed stream. The larger area obtains lower velocity of LPG stream and decreases the turbulency in the fluid. This may somehow decrease the mass transfer coefficient which is dependent on the Reynolds number. M.R. in equation 1 is abbreviated as Mercaptan Removal.

3.2. The Effect of Amount of Input Mercaptan

The effect of mercaptan content in feed stream on the process performance is studied in Figure 2 for two kinds of nano catalyst, spherical and cylindrical. The effect of changing in concentration driving force at the optimum conditions of catalytic bed founded in experiments. Figure 2 indicates on this fact that although the increase in the amount of driving force helps the rate of mass transfer but the finite amounts of available area of catalyst doesn't provide the effective mass transfer and remove the acceptable amount of sulphur. The aim of this Figure 2 is to predict the feasibility of using the proposed reactor for different feed stream. Due to the results, the increase in the amount of inlet sulphur concentration provides the acceptable amount of

Figure 2. The effect of inlet concentration on the mercaptan removal.

Low temperature liquefied petroleum gas sweetening applying nano catalyst has been investigated and has not commercialized yet. Nano catalyst development in various areas proposes to perform many processes economically and efficiently. The optimum operating conditions and reactor characteristics for mercaptan removal with ZnO nano catalyst are investigated experimentally, in this work. The correlation for suggesting the mercaptan removal versus bed diameter is presented in this research. This polynomial is

order. The results show the

as process index is increased when the initial concentration of mercaptan increasing. The

in 100 miligram per litter as mercaptan content of inlet liquefied petroleum gas for cylindrical and spherical nano particles are 0.0029 and 0.0034, respectively.