Optimization of Synthesis Conditions of Zeolite 4A from Nepheline Syenite

Zeolites are a family of inorganic crystalline materials. They consist of interconnected aluminosilicate building blocks, i.e., AlO4 or SiO4 tetrahedra, which form 3-dimensional (3D) frameworks with linked channel systems and well-defined micro- and mesopores. At the same time, this high degree of open porosity gives rise to an exceptionally high-surface area. The database of the International Zeolite Association (IZA) comprises structural information and crystallographic data of more than 170 framework types [1].

Zeolite has a natural porosity because it has a crystal structure with windows, cages, and super cages. The natural zeolites are limited in their window size ("pore size") and are all hydrophilic (having an affinity for water). Some synthetic zeolites are similar to an absorbent carbon, since both can be considered hydrophobic (having an affinity for organics, with lack of or a decreased affinity for water), and can adsorb organic vapors with molecules smaller than their "pore size" [2]. There are three main uses of zeolites in industry: catalysis, gas separation and ion exchange which are catalysis, ion exchange, and adsorption. Zeolite A is one of the most important molecular sieves, because of its high adsorption and ion exchange capacity. This zeolite has also a good cation exchange capacity and can easily exchange sodium ion with such as cations especially like calcium ion. Cation exchange capacity depends on ion concentration, temperature and comparative cation characteristics such as value capacity and atomic number. Zeolite A is usually produced in sodium form by trade mark of LTA. The zeolite has a unit cell formula of Na12[(AlO2)12(SiO2)12].27H2O and crystalline hydrated 18–22%. Among all zeolites, synthetic zeolite such as types NaA and 13X constitute a valid alternative for phosphate substitution in detergents. Application of zeolite A as builder in detergents has reduced environmental problems. The application and use of this material can optimize the sewage treatment plant [3]. Different Si and Al sources are reported for the synthesis of zeolite A such as kaoline, coal fly ash, colloidal silica, bentonite and sodium silicate as Si source and aluminum metal powder, aluminum tri isopropoxide, bauxite, kaoline and sodium aluminate as Al source [4–13]. Sodium silicate and sodium aluminate are the most practical sources for the synthesis of zeolite A and hydrothermal synthesis is the most commonly used production procedure [14–17]. The use of different sources of Si and Al may result in different structural parameters and elemental contents, surface area and average particle size of the synthesized zeolite [18]. The use of zeolites as builders in detergents requires a competitive price with regard to phosphates and other possible sequestrates. For this reason, zeolites must be synthesized from economical raw materials. The synthesis of zeolite NaA from raw materials such as natural clays, particularly kaolin has been reported.

Nepheline syenite is an igneous rock, which is similar in its medium to coarse-grained appearance to granite. However, the essential compositional difference is that nepheline syenite is deficient in silica and has a higher proportion of the alkalis, sodium and potassium, as well as a higher proportion of alumina. It is a feldspathoid mineral of composition (Na, K) AlSiO4 and usually forms small grains, which are intercrystallized with the feldspar. Its chemistry is close to the alkali feldspars, but they are poorer in silica [19]. It contains approximately 25 % alumina. Recently it is used for preparation of alumina. It has the cubic structures of SiO4 and AlO4-tetrahedrals. Although the nepheline syenite can be both Si and Al sources but low Si/Al ratio of zeolite A leads to use of other Al source. Aluminum hydroxide is a common and low cost source of Al. This compound was used as the Al source for the synthesis of zeolites [20].

In this work, zeolite A was synthesized from nepheline syenite, as Si and Al source and also sodium aluminate as source of required Al (according to zeolite A formulation). At first the nepheline syenite was pretreated and its aging conditions was optimized. Then, the conditions for synthesis of the zeolite was applied. The chemical and physical properties of the synthesized zeolite A were investigated by XRD, XRF, DLS, FTIR and AAS. 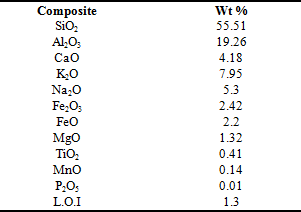 The nepheline syenite was pretreated according to following conditions: At first, it was crushed and screened to particle diameters lower than 40 µm. In order to remove iron compounds and to reduce the consumption of chemicals, high gradient magnetic separation was used. Then it was calcined at 900 °C to complete its transformation. The refined nepheline syenite was separately treated with 0.1 M HCl solution in order to solubilize and remove impurities at 60°C ±2 for one hour and then filtered, thoroughly washed with water and dried. The gels were prepared by dissolving the pretreated in different concentration of NaOH solutions at different temperature and aging time. Different conditions of synthesis were tested and the effect of different factors was studied on aging of nepheline syenite. After an aging time, the gel was heated to the desired crystallization conditions. Periodic samples (every 30 min), were filtered, washed with distilled water, and dried at 120 °C for 12 h. The main parameters determining the yield of dissolution of nepheline syenite were investigated followed by the analysis of Si concentration in the filtrate using atomic absorption spectroscopy (AAS, Varian SpectrAA-20BQ).

For the preparation of aluminate solution, aluminum hydroxide, sodium hydroxide, and water with 1:1.8:28 mass ratios were mixed and heated at 90˚C to make a clear solution.

The synthesis of zeolite A was carried out in a laboratory stirred reactor. The reactors consisted of a spherical stainless steel vessel, hermetically sealed and equipped with baffles, a stirrer driven by an electric motor, and a heating system with temperature control. Then aluminate solution and nepheline syenite solution with (1:1.8:28): 2.283 were mixed together. Then, the mixture was heated at 90 °C and stirred with a mixing rate of 1200 rpm for 5 hours in a stainless steel reactor equipped with a heating jacket and then let to be rested for 10 hours. Synthesis of nano zeolite requires a high speed mixing system. Hence, the stainless steel reactor was equipped with a homemade high shear mixer and the mixing rate was 1200 rpm. The product was filtered, washed, dried and characterized by XRD, FTIR, and wet chemical analysis (AAS). XRD measurements were carried out using a Simens D500 diffractometer with the Cukα (λ=1.54 Å) source at 40 kV and 40 mA. Elemental analysis was performed with S4 PIONEER (BRUKER) XRF and wet chemical analysis using atomic absorption spectroscopy (AAS), Varian SpectrAA-20BQ.

For FTIR spectroscopy, the synthesized NaA zeolite samples were pressed into self-supporting wafers of 10—15 mg/cm2surface density and placed into a glass cell sealed by KBr windows at a ratio of 1:100. The spectra were recorded in transmittance at room temperature at the range of 400-4000 cm-1. For more distinguish the peaks, the FTIR spectra are shown in the wave number range of 400-1200 cm-1.Apart from determining the presence of NaA zeolite by XRD, the percentage of crystallinity was determined with respect to the commercial NaA type zeolite (BDH 54005-4s) following the procedure of ASTM D3942-80.

The particles size distribution of synthesized zeolite was measured in a Zeta-sizer dynamic laser scattering (ZS-DLS) instrument is the diameter of the sphere that diffuses at the same speed as the particle being measured. The Zeta-sizer system determines the size by first measuring the Brownian motion of the particles in a sample using dynamic light scattering and then interpreting a size from these using established theories. 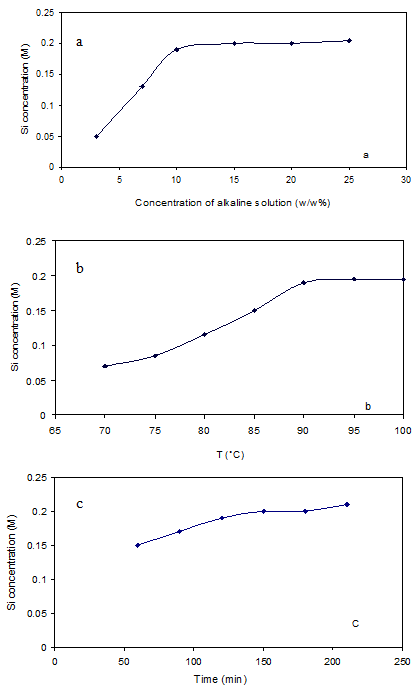 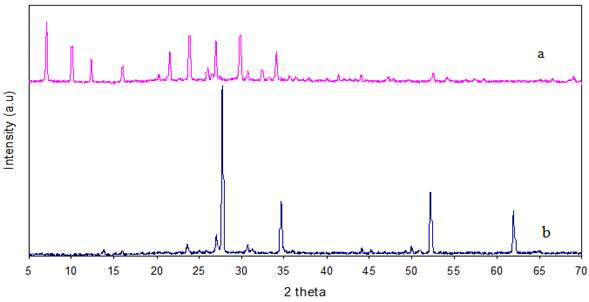 The effect of temperature on dissolving process was investigated at different temperatures. The results showed that Si concentration in filtrate was improved with the increase in. While at temperature between 90-95˚C no significant change was observed in dissolution yield. Therefore, an optimum temperature of 90˚C was selected for dissolving (Fig.  1(b)). The dissolving time was also optimized. Increasing dissolution time from 90 min to higher, didn’t improve the solubility of nightline syenite (Fig. 1.c). So the time of 90 min was chosen as optimum time for dissolving of nepheline syenite.

Fig 2. shows the XRD pattern of nepheline syenite and synthesized zeolite. It was found that quartz (SiO2) and Al2O3 existed as crystalline substances in the zeolite as identified by the sharp peaks. The crystalline zeolite phase, was determined quantitatively by comparing the peak area of 20-23.5˚ of solid product with the standard zeolite, distributed by BAYER LTD. All zeolite NaA samples were identified as a single phase zeolite NaA (JCPDS card 430142).

The average particle size as measured by ZS-DLS, was found to be around 3-10 mm as illustrated in Fig. 3. It is clear from the figure that a various distribution of particle size is found for the zeolite but particles in range 3-10 are abundant.

The elemental analysis of synthesized zeolite was performed with XRF and wet chemical analysis shown in Table 2. The elemental analysis approved that the composition of the samples is in agreement with that of zeolite A. A little impurity of ferrous compounds and other metals are observed in composition of the zeolite. Apparently, the presence of impurities such as Fe, Ti, Mn, etc., in the synthesized zeolite samples may be due to the incorporation of these elements during crystallizations. These elements were thought to be present as soluble oxides in nepheline syenite and were expected to form oxy-anions upon dissolution under alkaline conditions during the extraction of Si source from nepheline syenite. 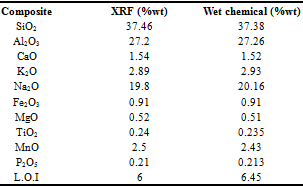 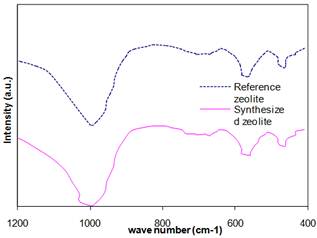 Therefore, the results obtained from XRD, FTIR and AAS revealed the synthesis of zeolite A.

Zeolite 4A was successfully synthesized from a nepheline syenite and sodium aluminate solution with ratios of SiO2/Al2O3=2, Na2O/Al2O3=5 and H2O/Al2O3=35 under mixing rate, mixing time and reaction temperature of 1200 rpm, 5 h, and 90 ˚C, respectively.

Characteristic techniques of XRD, FTIR, and AAS approved the formation of zeolite A structure for the sample. According to the color and the range of particle size of the synthesized zeolite, it is suggested that it could be a suitable for use in detergent industry. It is concluded that nepheline syenite can be used as economical raw materials not only for the synthesis of zeolite A, but also for other zeolites.

This work has been funded by Tabriz Pharmaceutical Technology Incubator of Tabriz university of Medicine Science. Authors are grateful to Iranian Nanotechnology Initiative for encouragement supports.