The properties of concrete are governed by cement hydration. The latter can be modified through the incorporation of siliceous additions, which leads to the densification of the concrete’s matrix by its physical "filling" and chemical role " pozzolanic reactivity". This incorporation allows to product an ecological, economic and perform concrete. Thus, contribute to sustainable development in construction field. In order to better understand the pozzolanic effect of the siliceous additions in Portland cement pastes, x-ray diffraction (XRD) analysis of lime pastes containing three ultrafine additions (Silica fume "SF", ground blast-furnace slag "S", and finely ground quartz from dune sand "DS") was carried out. This analysis is a simplified approach to that of cement pastes for which the principal reaction is the fixing of lime "Portlandite", released during cement hydration, by additions and forming the second-generation of calcium silicate hydrates (C-S-H) denser and therefore more compact cement matrix. This research shows that the very finely ground DS, in spite of its crystalline nature, has a partial pozzolanic reactivity. Ground slag, with a lower fineness than that of DS and a low silica content, has a better pozzolanic reactivity than DS because it has an amorphous structure, which explains the importance of mineralogical structure on the pozzolanic reaction. The pozzolanic reactivity of a siliceous addition is related not only to its fineness and silica content, but also especially to its morphology.

To achieve sustainable development in civil engineering is the aim of many studies around the world. One tone of cement produced generates an emission of about 0.9 tons of CO2. [1,2]. One way to reduce this emission and energy consumption for the cement industry is to introduce SCMs substitution.

These additions are usually industrial waste or natural deposits with a pozzolanic character. They contribute to compactness of cement paste by fixing of Portlandite released during the hydration of cement. This reaction leads to formation of second-generation calcium silicate hydrates (CSH). and thus, to sustainable economic and ecological concrete [3,4,5,6].

However, several studies have shown that the current ground quartz presents a pozzolanic activity called "partial". This reactivity is mainly due to the presence of fine particles adsorbed on amorphous crystalline particles. [8,9,10,11]

This research is included within a larger program on the formulation of Ultra High Concrete "UHPC" using local materials: Blast furnace slag and dune sand, and compare their effect to that of silica fume.

In order to better characterize the pozzolanic effect of these additions in Portland cement pastes, the hydration of the (Lime + additions) mixtures was monitored using X-ray diffraction. This study is a simplified approach to that used with cement pastes for which the principal reaction is the fixing of lime, resulting from cement hydration, through the additions (pozzolanic reaction).

The materials used in this study are:

- Cement CEM II/A originating from an Algerian cement factory with a fineness of 3600 cm 2 / g [Blaine] and a specific gravity of 3.1.

- Dune sand in its natural state to formulate UHPC; it used as a granular skeleton. This sand has a fineness modulus near to 1 (Mf=0.95) and a diameter of the coarsest grain lower than 0.630 mm.

Chemical analyses of these three additions are presented in Table 1

Of all the additions, slag has the lowest SiO 2 content.

To highlight the mineralogical nature of these additions, an XRD analysis was conducted and reported in Figure 1.

X-ray diffraction patterns presented in this figure show that the finely ground dune sand has a crystallized siliceous structure of the low-quartz type, whereas slag and condensed silica fume present an amorphous structure. The SF is characterized by a significant centered halation with 4.04 A° corresponding to the principal line of cristobalite, which is the nearest form to silica glass from a thermodynamic point of view.

The slag is characterized by a significant centered halation corresponding to the principal line of melilite (C3MS2-C2AS).

Scanning electron micrographs of dune sand show, as presented in figure 2, that its structure is formed by amorphous fine particles adsorbed on large crystallized particles. 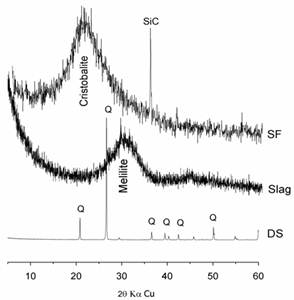 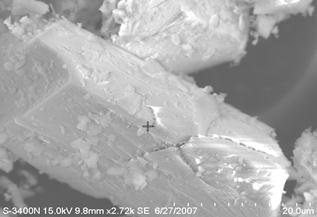 3. Study of the Pozzolanic Reactivity of the Additions

The evolution of the pozzolanic reaction over time of these additions has been studied using XRD on pastes containing 50% pure lime + 50% addition.

Results of these analyses are presented in Figures 3, 4, and 5. 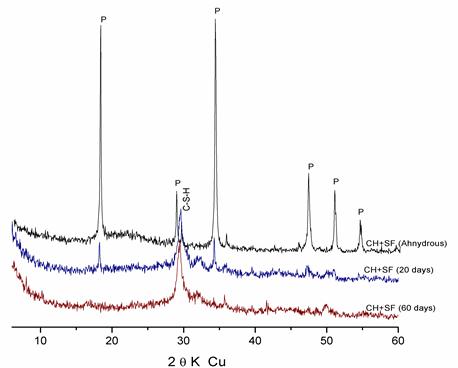 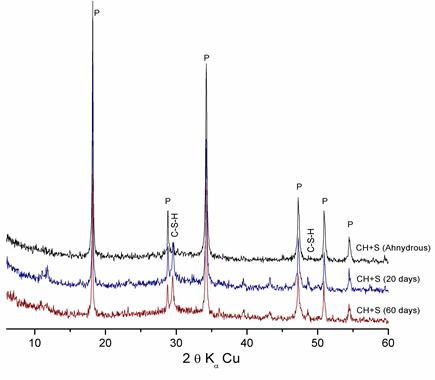 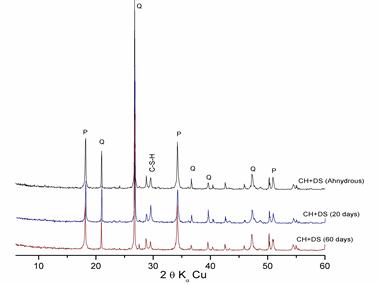 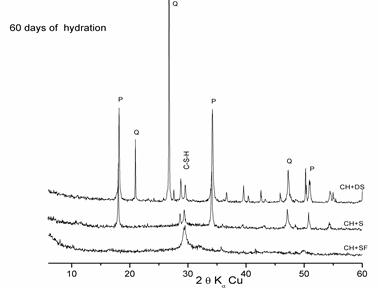 Figure 6. Comparison of the pozzolanic reactivity of the different additions at 2 months of hydration 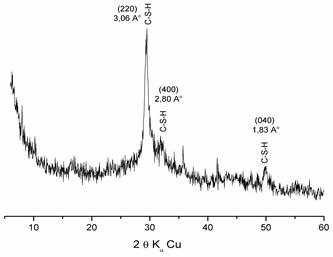 Figure 7. Pozzolanic reactivity of the SF at 2 months of hydration

X-ray diffraction patterns of these figures show that the intensity of the lime rays decrease with time in the presence of the additions, which is due to the fixing of lime by silica particles (pozzolanic reaction) to form C-S-H.

- Figure 6 shows the total absence of lime in the « Lime + SF » mixture at 2 months of hydration, which explains the strong pozzolanic reactivity of SF due to its very high fineness and amorphous state.

- Despite its crystalline form, dune sand displays pozzolanic reactivity that is in agreement with literature [9,10,11,12]

- The pozzolanic reactivity of dune sand is partial and less significant than that of ground slag, since the latter has an amorphous structure, unlike ground dune sand, which is crystallized.

It can be concluded that amorphous silica is able to fix significant quantities of lime in a ratio of CaO/SiO2 > 1. This has been confirmed by the low silica content of the slag.

Considering the high reactivity of the SF used; due to its high fineness and the amorphous structure of the silica it contains; and in order to specify the semi-crystallized structure of the C-S-H obtained at 20 0C. It has been thought that would be useful to represent X-ray diffraction patterns of the   «  CH + SF » mixture at 2 months of hydration (Figure 7), since they do not present additional diffraction rays corresponding to the reflections h.k.o as: 3.06 A° (220), 2.80 A° (400), and 1.83 A° (040) (which is in agreement with H.F.W. Taylor and R. Sierra) [4]

4. Hydration of Cement in Presence of Additions

The tests previously carried out on lime pastes have highlighted the kinetics of fixing of lime by the additions. In the same manner, a comparative study using XRD on the evolution of Portland cement hydration in the presence of 15% of these additions (DS, S, SF as cement substitution) has been carried out.

- At 20 days of hydration, the rays of lime and C-S-H appear and the intensities of the C3S and C2S rays decrease, which explains the hydration of calcium silicates.

- In the presence of dune sand at 20 days of hydration, the intensities of the quartz rays decrease compared to those of the anhydrous mixture, showing the pozzolanic reaction of dune sand, as confirmed by previous results with lime).

- At 2 months of hydration, the intensities of the lime and cement minerals rays (even those of quartz) decrease significantly, which shows the pozzolanic effect of these additions.

In the presence of SF, the reduction in lime is more significant. This can be explained by the high pozzolanic reactivity of SF, which confirms hydration results with lime. 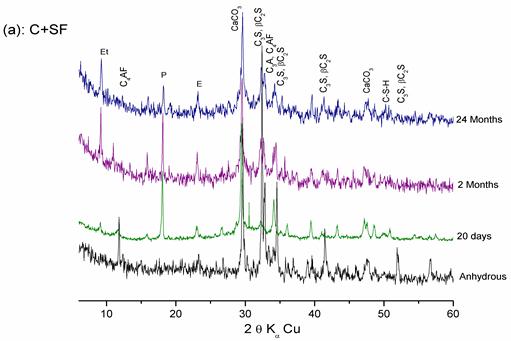 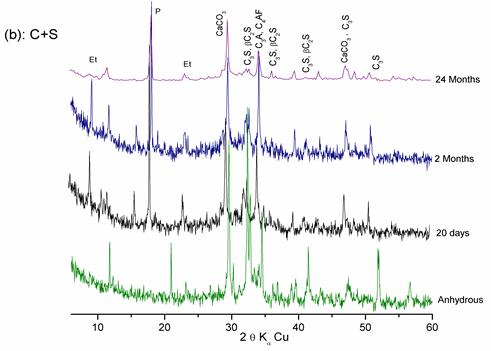 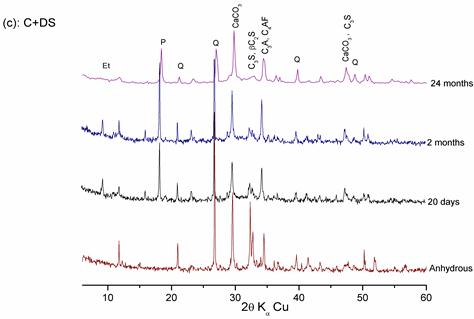 5. Pozzolanicity of the Additions by Mechanical Tests

In order to confirm the results obtained by XRD, we determined the pozzolanic activity indices, which represent the relationship between compressive strength of the UHPC with and without additions:

The formulation of these concrete mixes has been carried out on the basis of that recommended by P. Richard and M. Cheyrezy using a quantity of sand per volume unit lower than 0.83 times the apparent density of sand. [12, 13, 14]

Table 2 resumes different composition of concrete mixes.A W /B ratio of 0, 24 in presence of a superplasticizer dosage of 1, 8% dry extract have been used.

Compressive strengths obtained on test tubes (4 × 4 × 16 cm3) and the pozzolanic activity index of these concrete  are given in Figures 11and 12. 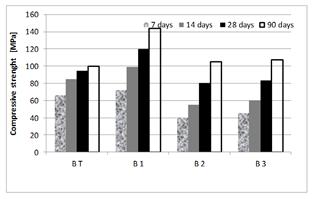 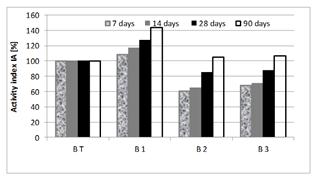 Figure 11 shows that the additions play a pozzolanic role from their pozzolanic index higher than 75%.

The pozzolanicity of SF is very high, compared to the two other additions.

As for the dune sand, its activity index remains lower than that of slag, despite its specific surface and SiO2 content being higher than those of slag.

This could be explained by the slowness of the pozzolanic reaction.

These results show that pozzolanic reactivity is more significant in materials having an amorphous structure than in those that are crystallized.

A classification of the pozzolanic activity indices can be established as follows:

The results obtained consolidate the conclusions found through XRD. They show that a crystallized siliceous material, when it is very finely divided, can be reactive.

This study enabled to draw the following conclusions:

Very finely ground dune sand, in spite of its crystalline nature, has a partial pozzolanic reactivity.

Ground slag, with a lower fineness than that of dune sand and a low silica content, has a better pozzolanic reactivity than dune sand because it has an amorphous structure, which explains the importance of mineralogical structure on the pozzolanic reaction.

It is acknowledged in the literature that due to its high fineness, SF is suited to the production of high and very high performance concrete, both at early and advanced ages. Indeed, the very fine particles of silica fume can fill spaces between cement particles, which render the concrete matrix more compact and thus improve its durability.

These results are of great interest for concrete technology, as they enable to improve concrete quality at lower cost through the introduction of siliceous additions available locally in Algeria (blast-furnace slag and dune sand).