In the present paper, the tribological characteristics (wear and friction) of Al-SiC metal matrix composite fabricated by stir casting technique are studied. The metal matrix composite is fabricated using LM6Aluminium alloy as base metal and mixed with SiC as reinforcement. The volume fraction of SiC reinforcement is varied in the range of 5-10% by volume. The tribological tests were performed in a multi tribotester using block-on-roller setup at room temperature of 280C. Block samples of 20mm x 20mm x 8mm was prepared from the casted material and tested against EN8 steel roller. A load range of 50-100 N and sliding speed range of 180-220 rpm was chosen for the purpose. Wear depth and co-efficient of friction are chosen as system responses for wear and friction study. Wear resistance increases with increase in vol% of SiC whereas co efficient of friction is higher for Al-7.5%SiC and minimum for Al-10%SiC. The micro-hardness test conducted by Vickers micro-hardness tester concluded increase in hardness with increase in volume fraction of the reinforcement. To study the wear phenomenon wear tracks were analyzed using scanning electron microscopy.

Nowadays metals or alloys having light weight and good mechanical and tribological properties have high demand. The metal matrix composites reinforced with hard ceramics such as silicon carbide (SiC), alumina (Al2O3) and graphite show high specific strength and thermal conductivity. The reinforcements are widely found in the form of particulate also others forms such as fibers and whiskers are also available [1]. Thus, Al-MMCs have become an increasingly interesting material to study the tribological characteristics. Mostly researchers study the effect of volume fraction [1-10]. Some researchers have studied the effect of applied load [11-15] and sliding speed [16-21] on the friction and wear behavior of Al-SiC MMC. Mostly stir casting process is used as fabrication process for such composites also other processes such as die casting, rheo casting, spray foaming, etc. have lured many investigators to prepare such composites [4]. The aluminium MMCs are widely chosen for their rare combination of light weight and improved property than of aluminium alloy. This kind of material has good use in automobile, aerospace and mining industries. Some of the component such as brake drum, cylinder liners and drive shaft are fabricated using Al composites in the automobile industry [6]. Besides MMC, researchers have studied other strong and hard materials with similar tribological properties, such as some nano-structured carbon based materials [22,23].

For the present investigation Al-SiC metal matrix composite is prepared by varying volume fraction of reinforcement in the range of 5-10% with a variation of 2.5%. The tribological studies were conducted in a Multi tribotester test. Using 50, 75 and 100N loads and sliding speeds of 180, 200, 220 rpm was selected and various tests were performed at room temperature and dry condition. The hardness of the three types of composite was evaluated in a Vickers micro-hardness tester at 1kgf load for a dwell time of 15s. To determine the wear phenomenon the wear tracks were analyzed by scanning electron microscopy.

Al-SiC metal matrix composites having three different volume fraction of SiC were fabricated using stir casting process. For the fabrication process aluminium alloy i.e. LM6, is used as matrix metal that has been reinforced with 5, 7.5, 10 wt. % of SiC particles of 400 mesh size. The chemical composition of the matrix material (LM6) was given in Table 1. The process is both simple and less expensive, so the process is chosen for the fabrication of the composite.  The small ingots of LM6 is melted in clay graphite crucible using an electric resistance furnace and 0.5 wt.% Mg is added with the liquid metal, in order to achieve a strong bonding by decreasing the surface energy (wetting angle) between the matrix alloy and the reinforcement particles. The addition of pure magnesium has also enhanced the fluidity of the molten metal. Before mixing of the silicon carbide particles with the liquid LM6, the particles are preheated at 9000C for 2-3 hours to make their surface oxidized. The melt is mechanically stirred by using a mild steel impeller and then the pre-heated silicon carbide particles (at 9000C) added with the stirred liquid metal. The processing of the composite is carried out at a temperature of 7200C with a stirring speed of 400-500 rpm. The melt is then poured at a temperature of 6900C into a green silica sand mould. The material is then cooled and samples for tribological testing are prepared by different machining processes.

The tribological tests are carried out in a block on roller Multi tribotester TR25 (Ducom, India) (Fig. 1). It is used to measure the tribological characteristics of Al-%SiC under dry non lubricated condition and at ambient temperature (280C) and relative humidity of about 85%. The Al-SiC samples (size 20mm x 20mm x 8mm) are pressed against a rotating steel roller (diameter 50 mm, thickness 50 mm and material EN8 steel) of hardness 55 HRc. The setup is placed in such a way that the rotating roller serves as the counter face material and stationary plate serves as the test specimen. A 1:5 ratio loading lever is used to apply normal load on top specimen. The loading lever is pivoted near the normal load sensor and carries a counter weight at one end while at the other end a loading pan is suspended for placing the dead weights. The frictional force is measured by a frictional force sensor and wear depth is measured by a LVDT. Three sets of experiments were performed firstly to study the effect of volume fraction 50 N applied load, 200 rpm sliding speed and 40 min time is chosen for the purpose. For the second set of experiment where effect of load is studied 200 rpm sliding speed and 30 s time was selected and for different volume fraction tribological tests were performed at loads of 50, 75 and 100 N. And for the final set to study the effect of sliding speed 50 N load and 30 min time was selected and for different volume fraction of SiC at sliding speeds of 180, 200 and 220 rpm the tribological tests were performed.

The hardness of different Al-SiC composition is tested in Vickers micro-hardness tester at load of 1kgf. Microstructure study of the wear tracks are carried out by scanning electron microscopy to analyze the wear phenomenon. 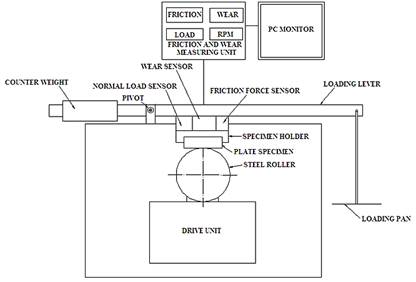 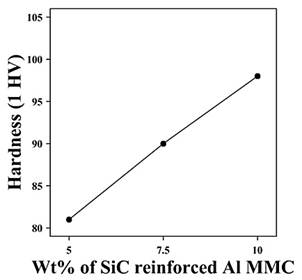 Fig. 2. Variation of hardness with different volume fraction of reinforcement

From the Vickers micro-hardness test results tabulated in Fig. 2, hardness values increase with increase in volume fraction of SiC reinforcement. The hardness of a material determines the depth of penetration on a material depending on load. In case of composites, the depth of penetration is governed by the protruded reinforcement particles. The reinforcement particle actually helps to support the contact stress preventing high plastic deformation and abrasion between contact surfaces. Thus increase in volume fraction of SiC reinforcement increases the hardness of the composite material. 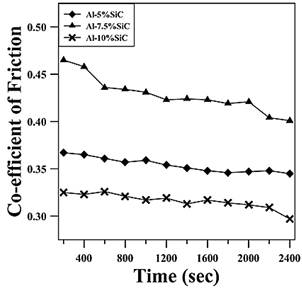 Fig. 3. Variation of coefficient of friction with sliding time 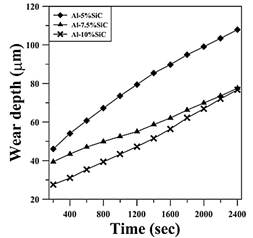 The effect of variation of applied load on friction and wear behavior of Al-SiC is shown in Fig. 5 and 6. It is observed that with increase in applied load coefficient of friction increases. This is due to the fact that at higher applied load the amount of deformation or ploughing is more leading to higher coefficient of friction. In case of wear behavior, wear depth decreases with increase in load from 50-75N and again increases at 100N load. It means there is no monotonic trend of variation of wear resistance with applied load probably due to non-homogeneous nature of the material. 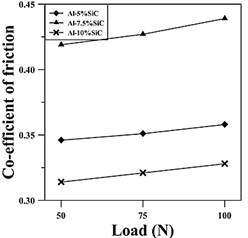 Fig. 5. Variation of coefficient of friction with applied load 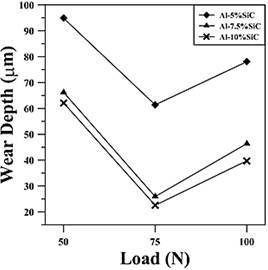 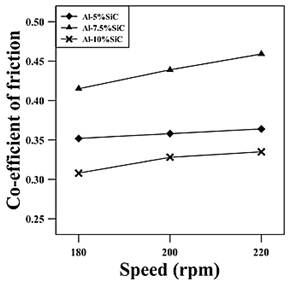 Fig. 7. Variation of coefficient of friction with sliding speed 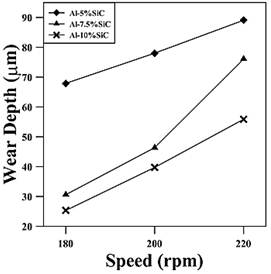 The wear tracks on the worn out surfaces of the composite are seen with the help of scanning electron microscope and is illustrated in Fig. 9. We can see longitudinal grooves and partial irregular pits which indicates adhesive wear behavior. The presence of grooves indicates the micro-cutting and micro-ploughing effect of the counter face while pits or prows are indicative of adhesive failure of Al-SiC composite. The adhesion occurs under the experimental conditions that induce a substantial attractive force between the mating surfaces leading to a high mutual solubility of aluminium and iron. Hence the wear phenomenon encountered in case of Al-SiC is a combination of abrasive and adhesive wear. 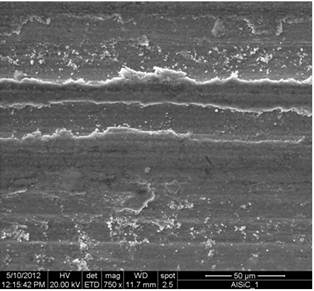 Fig. 9. SEM image of wear tracks on worn out composite

From the present tribological study for different compositions of Al-SiC composites, varying load and sliding speed, we can conclude the following:

(1)  Hardness of the composite increases with increase in SiC reinforcement.

(4)  With increase in sliding speed both coefficient of friction and wear depth increases.