The compressive and flexural strengths of concrete using rice husk ash (RHA) as partial replacement for cement is investigated.The RHA substituted in place of cement were 0,10, 20, 30, 35 and 100%RHA. The specimens were cured for a period of 7, 14, 21, 28 and 35- day respectively and it was observed that the control specimen(0% RHA) experienced defects such as efflorescence but the RHA-ordinary Portland cement(OPC) specimens did not. The 100% RHA specimen were unable to set and this is perhaps due to the absence of the by-products of hydration process such as calcium-silicate-hydrate (C-S-H) gel known as tobermorite and calcium hydroxide,Ca(OH)2, and the high SiO2 content compared tothe low content of other important compounds such as Al2O3 and Fe2O3 in the mix. The compressive and flexural strengths of the concrete were found to decreased with increase in RHA contents with the 10% RHA replacement having the optimum value for improved structural performance at 28-day( control: 22.93N/mm2 and 8.73 N/mm2, specimen: 22.22 N/mm2and 6.60 N/mm2)for compressive and flexural strengths. It can be concluded that RHA can be used as a partial replacement for cement in concrete, with the 10%RHA giving the optimum compressive and flexural strengths.

There has been an alarming rate of increase in the price of building materials in recent years. This has engineered the government to sourced materials to supplement the conventional materials. It is in this regard that this work, private sectors and individuals have to go in search with intends to study with a view to partially replace cement in concrete with rice husk ash(RHA) which is locally available. The whole concept of this idea is to ensure that an average working class citizen of this country(Nigeria) will be able to own a house.

Concrete is a composite material which consists essentially of a binding medium within which are embedded particles or fragments of a relative inert filler in Portland cement concrete, the binder is a mixture of Portland cement, possibly additional cementitious materials such as fly ash and water, the filler may be any of a wide variety of natural or artificial, fine and coarse aggregates, and in some instances, an admixture according to (Power, 1858, Topcu and Uygunogle, 2010). Concrete is presently one of the most popular materials used in building construction and other civil engineering works. When reinforced with steel, it has a higher capacity for carrying loads. Concrete being a heterogeneous material, the quality of the constituents and the proportions in which they are mixed, determine its strength and properties.

(Ad, 2005) reported in ECO-CARE: vast majority of the cement used in construction work is the Portland cement. Portland cement is manufactured by mixing naturally occurring carbonate with materials containing calcium carbonate with substances containing alumina, silica and iron oxide. (ASTM 618-05, 2005) define pozzolana as siliceous or siliceous and aluminous materials which in themselves have little or no cementitious properties but in finely divided form and in the presence of moisture, they react with calcium hydroxide which is liberated during the hydration of Portland cement at ordinary temperatures to form compounds possessing cementitious properties. They include punice, tuffa, volcamic ash, diatomaceous earth, calcined clay, shales, and pulverized-fuel ash (PFA) of fly ash. According to ASTM (2005), by-product material admixtures such as fly ash, RHA, and ground granulated blast furnace slag are attracting much attention as materials that not only contribute to improvement of concrete performance (for example, high strength, high durability, and reduction of heat of hydration) but are also indispensable to the reduction of energy and carbon-dioxide generated in the production of cement (Okamura and Ouchi, 2003).

Ikpong (1993) reported that rice husk is the outer covering of the rice grain consisting of two interlockings. It is usually produced as an agro-waste while processing rice through a process known as threshing. The colour is dependent on the carbon content of the ash.

RHA is a finely fragmented or divided particle of agro-waste product measuring less than (about 1/9 mm) in diameter, it is obtained from the removal of rice grain from its shell called husk, as reported by (Neville and Brooks, 1987). Several institutions have investigated the properties of RHA and found out that it contains higher properties of silica and there has been some commercial exploitation of its pozzolanic reaction with lime. RHA is also described as a fine pozzolanic material, which in itself is poorly cementitious in nature but can form a cementitious compound in the presence of lime and water. The pozzolanic value of RHA depends on the burning conditions. According to Okpala (1987), controlled incineration of the husk to about 7000c yields amorphous RHA which is highly pozzolanic.

There is an increasing importance to preserve the environment in the present day world. RHA from the par-boiling plants is posing a serious environmental threat and ways are being thought of to dispose them. This material is actually a super-pozzolane since it is rich in silica and has about 63 to 90% silica content. A good way of utilizing this material is to use it for making "high performance concrete" which means high workability and long-term durability of the concrete.

The desire to produce building materials that are affordable to all is the focus of this investigation. Cement is the most expensive component in concrete production and this has made it inaffordable only to the well to do. The concept is to produce structural concrete with almost equal properties as a standard concrete by partially replacing the cement component with an agro-waste (rice husk).The disposal of this agro-waste is a major problem globally and nationally.It is envisaged that at the end of this investigation two major outcomes are expected viz-vise:

(i)  Production of structural concrete using the rice husk ash with properties comparable to standard concrete.

Atan and Awang(2011) have reported the following properties for OPC and partially replaced cement with RRHA concrete:

It is seen from the table,that the RRHA developed early moderate strength of 22.7Mpa in compression and 3.2Mpa in flexure.Strength development increases at high rates from 7days to 28days in compression and from 7days to 60days in flexure.The main functions of the mineral additive (RRHA) in this case is to regulate the cement content so as to reduce the heat of hydration(European Project Group, 2005).

For the determination of the performance of concrete in terms of its engineering properties such as compressive and flexural strengths, the following materials were employed: these include; Ordinary Portland Cement (OPC), Rice Husk Ash (RHA), Aggregates (fine and coarse), water and consumable (engine oil), and concrete.

Table 2. Chemical analysis of RHA and OPC used in this study. 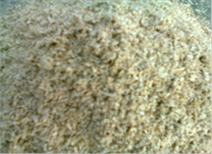 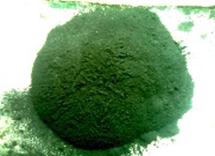 Fig. 1. Stages of preparation of the rice husk ash.

The aggregates used in this study were air-dried for about a week in order to remove any trace of moisturethat would have altered the water content of the concrete mixes.

The RHA was ashed by a direct furnace at incineration temperature at a range of 6500c – 7000Cand after which it was ground into a finely divided powderA type 1 ASTM C-150 OPCcement was purchased,clean tap water was also made available, including engine oil which served as consumable. Metal moulds were used for the casting of the compressiveand flexural specimens. The oil was used to tub the internal surface of all the moulds for easy de-moulding of the concretes.

The water – cement ratio is the ratio of the weight of water (w) to the weight of cement (c) used in the concrete mix and it has an important influence on the quality of concrete produced.

A lower water-cement ratio leads to higher strength and durability but may make the mix more difficult to place. Placement difficulties can be resolved by plasticizers but in this study, plasticizers were not used. Often, the water-cement ratio is characterized as the water to cement plus pozzolanes which influence the strength gain of the concrete.

The water (w) – cement (c) ratio used in this study is given as:

b = breadth of the concrete cube (m)

Also in order to obtain the masses required for beams, the volume was calculated to be 0.0135m3by applying equation 2. Therefore, the mass of a cube of concrete is given as:

Tables 3 and 4 give the mixed proportion for both compressive and flexural specimen.

2.4. Calculation Of Compressive and Flexural Strengths

b = width of the specimen (mm)

Table 5. Compressive strength of concrete with different percentages of RHA replacement and their standard deviation (S.D.).

The results of the compressive and flexural strengths are given in Tables 5 and 6 respectively.

Table 6. Flexural strength of concrete with different percentage of RHA replacement and their standard deviation (S.D.). 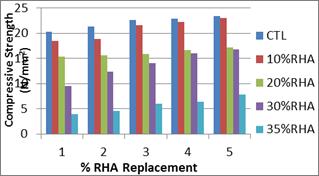 For the flexural strength, the same percentage RHA replacement were also used, i.e. 0% RHA (CTL), 10% RHA,20%RHA, 30%RHA and 35%RHA respectively. The results obtained are given in Table 6 and displayed in Figure 3, the effects of percentage RHA replacement and curing ages and the strengths are also given. From the Figure, it is evident that a steady decrease in the strength occurred with an increase in the %RHA contents. This effect can also be attributed to the lower contents of the cementitious products in the concrete matrix. With regards to curing ages as seen in Fig.3, the strength. increases steadily with prolonged curing, it therefore means that, the more concrete ages, the more the hydration process thereby producing more cementations by-products which leads to the enhancement of the strength of the concrete in question. Concrete usually have low flexural and tensile strengths that is why they are being reinforced with steel bars to improve on their flexural and tensile strengths. The flexural strength of the CTL specimen at 28- day of curing is 8.73 N/mm2 while that of the 10%RHA is 6.66N/mm2 which is about 76% of the mean flexural strength of the control. Therefore, the optimum percentage RHA replacement recommended for the concrete in this study is 10%RHA. 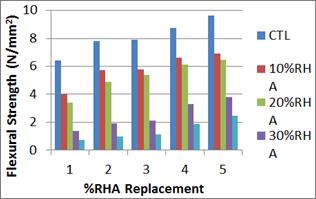 Figure 4, shows the specimens made with 100% RHA replacement i.e rice husk ash alone(the absence of cement).It is evident that RHA cannot be used alone in concrete making. RHA itself is a pozzolane which do not possess any cementing properties. From Fig. 4, it was observed that the specimen refused to set even after 24 hours of placement and consolidation, and after de-moulding the particles of the mix refused to set and hardened. This behaviour is as a result of the absence of the by-product of hydration i.e. tobermorite and calcium hydroxide which would have acted as binder. 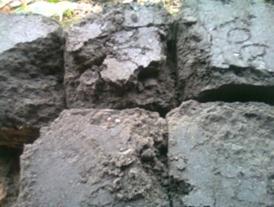 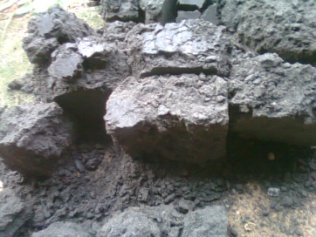 (b) 100% RHA specimen after testing for setting time.

Based on this study, the following conclusions could be made:

It has been shown that the compressive and the flexural strengths of the concrete increases with age.

It could be concluded that inexpensive concrete could be produced using RHA as partial replacement for cement which is the most expensive component for concrete.

It was observed that the 100% RHA specimen did not set and with this fact, the use of RHA alone in concrete production is not feasible.

The agro-waste( rice husk) can be properly managed when it is used as a partial replacement in the production of concrete.