Infrasonic Signals Clustering Based on Hilbert-Huang Transform and K-Means

Infrasound is a sound of which frequency is less than 20Hz. There exist a wide range of sub sonic waves in nature and human activities. The reason for the generation of the sound wave is various, which can be summed up in two aspects. One is caused by natural phenomenon. The infrasound occurs primarily by fluctuations of the wind, air turbulence, volcano eruption, earthquake, typhoon and waves beating. The second is due to human factors arising from such as nuclear explosions, rocket launchers and supersonic aircraft with flight [1].

Infrasound signals are nonlinear and non-stationary signals. Therefore, the case of using the conventional Fourier transform does not reflect the frequency spectrum changing over time. Wavelet transform’s time-frequency analysis can be performed, but does not have the self-adaptive function and it is also difficult to select thebetter-Wavelet. The Hilbert-Huang transform (HHT) draws wavelet transform’s multiresolution advantages while overcoming the need to select thebetter-Wavelet with good adaptability. Therefore, HHT is selected to extract features of infrasonic signals [2]. Predecessors used a variety of methods for classifying infrasonic signals. Neural networks and Gaussian mixture model are used to classify ship noise and wale sound [3], Zhou Xin had taken a research on signal modulation classification based on SVM and RVM [4]. But the signal classification algorithm needs to be trained by a lot of data. It cannot correctly determine the kinds of signals when the classification algorithm is not trained by a certain type of infrasonic signals, so it has some limitations. By clustering multi-dimensional feature vectors of infrasonic signals through K-means algorithm, we can quickly distinguish between different types of infrasonic signals generally, which thereby solve the problem of blind separation for infrasonic signals and shows good result.

The traditional signal analysis and processing are established based on Fourier analysis which is a global transformation that cannot express instantaneous frequency which is precisely the performance and the most fundamental properties of non-stationary signals. Fourier analysis therefore is not suitable for non-stationary signals. The HHT can obtain the instantaneous frequency of the signal and get the ‘time - frequency - energy’ three-dimensional map, which is beneficial for analysis to non-stationary signal such as infrasonic signal. HHT plays a key role in feature extraction of laser micro-Doppler signatures [5], tool wear [6], mine [7] and so on. HHT algorithm is divided into two steps, the first is empirical mode decomposition (EMD), and the second is Hilbert spectrum analysis (HSA).

The fundamental part of the HHT is theempirical mode decomposition (EMD) method [8]. Breaking down signals into various components, EMD can be compared with other analysis methods such as Fourier transform and Wavelet transform. Using the EMD method, any complicated data set can be decomposed into a finite and often small number of components [9]. These components form a complete and nearly orthogonal basis for the original signal. In addition, they can be described as intrinsic mode functions (IMF).

An IMF is defined as a function that satisfies the following requirements:

The procedure of extracting an IMF is called sifting. The sifting process is as follows:

1)  Identify all the local extrema in the test data

is the first component

does not satisfy the definition of an IMF, we repeat the above operation k times until

is a first IMF called

Stoppage Criteria of the Sifting Process is:

Then the sifting process stops when SD is smaller than 0.3.

Once a stoppage criterion is selected, the first IMF, c1, can be obtained. Overall,

should contain the finest scale or the shortest period component of the signal. We can, then, separate

from the rest of the data by

still contains longer period variations in the data, it is treated as the new data and subjected to the same sifting process as described above.

This procedure can be repeated for all the subsequent

's, and the result is

From the above equations, we can induce that

Thus, a decomposition of the data into n-empirical modes is achieved.

Having obtained the intrinsic mode function components, the instantaneous frequency can be computed using the Hilbert Transform [10]. After performing the Hilbert transform on each IMF component, the original data can be expressed as the real part, real, in the following form [11]:

Hilbert transform of the IMF：

is a function composed by

K-means clustering is a method of vector quantization, originally from signal processing, that is popular for cluster analysis in data mining. K-means clustering aims to partition n observations into k clusters in which each observation belongs to the cluster with the nearest mean, serving as a prototype of the cluster. This results in a partitioning of the data space into Voronoi cells.

Given an initial set of n samples, the algorithm proceeds by alternating between two steps:

Assignment step: Assign each observation to the cluster whose mean yields the least within-cluster sum of squares (WCSS). Since the sum of squares is the squared Euclidean distance, this is intuitively the "nearest" mean.

Update step: Calculate the new means to be the centroids of the observations in the new clusters.

The algorithm has converged when the assignments no longer change.

First, we extracted the active portion from original signal where amplitude fluctuated violently. And then we got the energy spectrum after the active portion was calculated through HHT. The analysis showed that the energy spectrum of different types of infrasonic signals on the first 20 points already has distinct characteristics. So we selected 20 data points of each infrasonic signal’s energy spectrum as feature vectors to input K-means algorithm and then obtaining classification results to see clustering situation. The model of method in Figure 1. 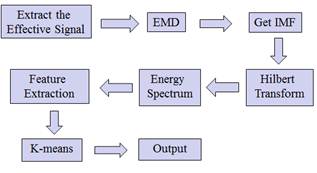 Figure 1. The model of method.

Table 2, Table 3 and Table 4, respectively, is a feature vector for the infrasonic signal calculated by HHT.

Table 2. A feature vector of earthquake.

Table 3. A feature vector of seaquake.

Table 4. A feature vector of volcano. 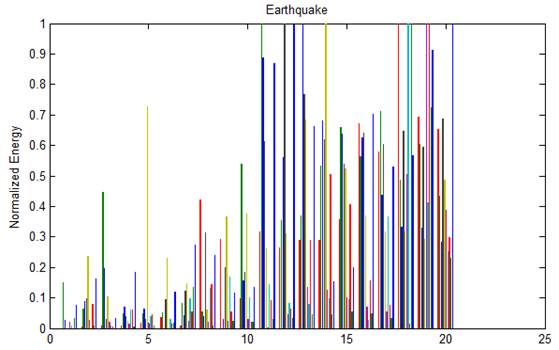 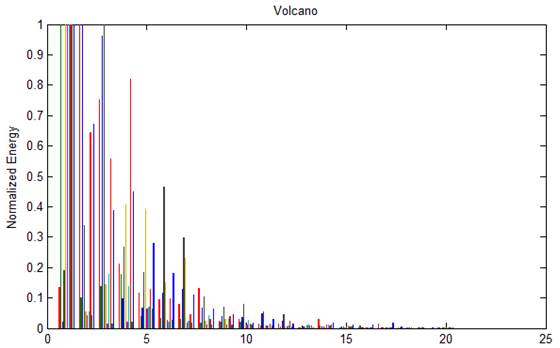 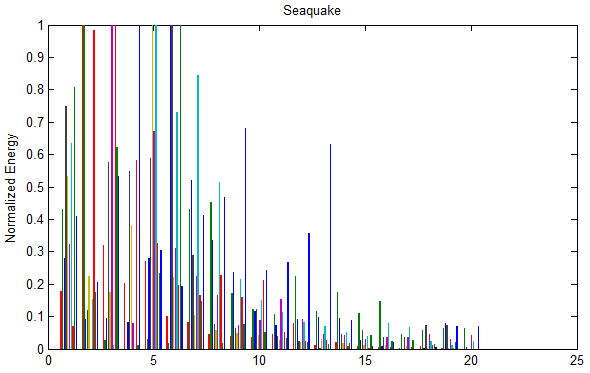 To input feature vectors in K-means algorithm, we obtained each cluster centers and cluster. The result as follows:

By results of the analysis, we could find that it had good effect on clustering distinct feature vectors. All seismic signals have been cited as one class up to 100%, but the accuracy rate for clustering signals of volcano and seaquake decreased to 80% respectively due to the overlapping portion of the feature vectors.Clustering differs from classification, which does not require large amounts of data pre-training and have higher operational efficiency compared to various classification algorithms. Therefore, in the no label data of a large infrasonic sample, we can quickly distinguish between general data, which is convenient to analyze each signal lately. K-means clustering algorithm needs to be set the number of types of clusters in advance. Therefore, there exist limitations of K-means. The clustering algorithm can be improved to not depend on the number of clusters in the future work. The dimension of signal characteristics can also be further reduced to enhance the efficiency of clustering algorithm.

In general, empirical mode decomposition (EMD) and Hilbert spectrum analysis obtain the signal with the actual physical meaning of the instantaneous frequency components and achieve high-resolution time-frequency analysis. Since the decomposition of the spline curve and its median value is performed several times, the density of the time series points is reduced by half for each decomposition, and the amplitude in the time domain is also reduced by half. Therefore, the EMD realizes the multi-scale decomposition on the time domain and Frequency domain. In addition, the similar same infrasonic signals had very similar feature vectors, while the different types of infrasonic signals had clear distinct feature vectors conversely. The k-means algorithm is known for its fast convergence. The satisfactory results prove that the combination of HHT and K-means clustering algorithm meets the requirement of the infrasonic signal clustering.

This work was financially supported by The National Natural Science Foundation of China (No. 41572347)