Plight of Youth Perception on Cyber Crime in South Asia

Cyber crime is a buzzword all over the world. Due to the global connectivity and online activities it has become a global concern, not a territorial one and is spreading in a terrific volume. In this regard mostly the young people are in vulnerability and being victimized by various means. The study aim was to access these states in South Asian developing countries (i.e., the demographic subdivision Bangladesh). The descriptive type of cross sectional study was carried out to assess the perception, causes and consequence of cyber crime among youth using purposive sampling method taking a sum of 118 respondents from Tangail municipality and Dhaka north City Corporation areas in Bangladesh. The study found most of respondents (46.61%) belonged to age group 19 to 21 years and 66.10% were male while 60.16% were in vulnerability of cyber crime by Internet fraud and 78.81% agreed that social media increase victimization by dissemination of false information (55.08%). It also found Maximum respondents (82.20%) were affected by virus attack, 56.78% were secondary victimized while most of them (72.03%) felt unsafe in cyber space and 61.86% said awareness can reduce victimization.

Computer brings a revolutionary change in communication and socio-economic transaction by Internet. Being facilitated with the virtue of it, people can communicate very easily national as well as international level. Generally it is called on-line communication. It is the vast source of data and information. We can get any information from the Internet world. Though it is the easiest way of communication, now it is the matter of concern that abuse of computer and Internet put together some people to commit crime and victimize others. According to Council of Europe "Any criminal offence committed against or with the help of a computer network is identified as cyber crime". So computer or computation related deviceis an essential for cyber crime perpetration and victimization [1].

Computer crime defined as criminal activities, involving information technology infrastructure, including illegal access of computer data from or within a computer [2]. Cyber crime is a worldwide problem now; no country is immune. The first cybercrimes occurred in India, Japan and china in 1820 (Techno focus cybercrime -A looming threat 2008). After that it was increasing evolutionary and at mid of 20th century it became a problem of concern. Around the world and in Middle East and third world countries the growth of Internetconnectivity in recent years increase in cyber criminal activities [3]. Fafinski’s study asserts that in 2001 approximately 28.5 million people in the UK use the Internet [4]. Internet use in the Middle East had reached 2.5% of the total worldwide use by December 2007 [3].

Different nations have adopted different strategies to contend with crimes depending on their nature and extent. Certainly, a nation with high incidence of crime cannot grow or develop. For Bangladesha nation that is in the process of development facing problems regarding cybercrimes. In Bangladesh Internet was first introduced in 1996 [5]. Foskett said Internet users are growing rapidly in Bangladesh especially in the metropolitan areas. In 2000, the number of Internet users was 100,000 and it shot up to 450,000 in 2007 [6]. In another report says about 2 million people use Internet in Bangladesh [5]. Among this large number of people many people are being victimized by the devastating attack of cybercrime. Because of cybercrime people lost their money, identity and many more. News of media and status those posted in the social media are the exemplary evidence of victimization. Total number of cybercrime and victimization of cybercrime is not revealed in Bangladesh, but the condition of other countries can represent an overall image. In Canada by the year 2000 the 45,950 computer crimes reported by the NIBRS and noted that most common type of computer crime was larceny/theft [7]. By the years cybercrimes develop besides technical development and by time it created new dimension of crime such as from telecommunication crime to electronic money laundering [8]. In the UK there were 92000 cases of on-line identity fraud during 2006 because of that average value of loss from 183.2 to 212.6 million pounds by card-not-present (CNP) fraud. 218.817 incidents of physical harassment were recorded. In 2006 850000 cases of unwanted online sexual approaches occurred [4]. 38% Drug Importation cases, 34% Defraud the commonwealth cases, 25% Child Sex related cases, 3% Counterfeit currency/documents cases, 45% E-Crime, 11% Interpol, 2% Counter terrorism, 42% Others (Fraud, Credit Card, Money Laundering) occurred in Australia during 2005 and 2006 (Australian federal police: 4-5). The systems of NASA, US Army, Navy and Department of Defence were hacked right after the 9/11 attacks [9]. Spam is now a great problem in cyber world everyday thousands of Spam spreading through e-mail and other way. Nearly 200 billion Spam messages are now sent each day, double the volume in 2007and that targeted attacks are also rising sharply and 90 percent of all e-mails sent worldwide are Spam, this means 800 million messages a day are attempts are spear phishing [10] which make our life problematic. Therefore, the current study was conducted to assess perception of cyber crime, nature and causes of victimization among youth in South Asian countries [11-14].

The study was a descriptive cross-sectional study conducted at purposively selected Tangail municipality and Dhaka north City Corporation areas in Bangladesh. There were taken a sum of 118youngfor the continuation of the study in full swing. A well-structured questionnaire was developed containing both the open and closed ended query along with observation to collect data interviewing the respondents in the study areas. The gained collected data was checked and further rechecked far away from the sample areas. The questionnaire was formed in order to gain the relevant information considering the dependent variables i.e., age group, level of education, residency, socio-economic contour and independent variable i.e., behavioural changing patterns during January 2013 to June 2014. The questionnaire was checked daily closing the field work, rechecked again after collecting all data and coded before entrancing into the computer technology. The data was edited if seeing any discrepancy (wrong entry, doubt entry etc.) and the data was processed to undergo statistical analysis using SPSS 16 windows program. Microsoft Word and Microsoft Excel were taken into consideration to focus the results using tabular, graphical and chart icon.

3. Findings of the Study

Table 2 presented that, 27.96% respondents got information of cyber crime from television while 60.16% were in vulnerability of cyber crime by Internet fraud and 78.81% agreed that social media increase victimization by dissemination of false information (55.08%). It also found 56.78% were secondary victimized and 38.14 were tertiary victimized while most of them (72.03%) felt unsafe in cyber space and 61.86% thought awareness can reduce victimization.

Table 3. Relationship between Repeat Victimization and types of cyber crime.

Table 4 showed that, most of the respondents over the Internet were victimized by false job or task opportunity (64.51%), Online scammers play role with trap of monetary profit/reward (14.51%) over the Internet, 11.29% using excuse of aid for helpless people. 9.67% online fraud related to the fake opportunity of abroad visa. Online email or untrusted communications over Internet were main reason behind visa fraud. Most of the victim of the hacking use untrusted login (42.86%) of various websites. 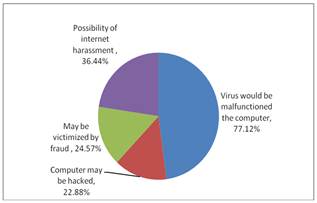 Figure 1. Types of fear felt in the case of cybercrime. 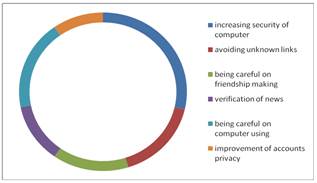 Figure 3 showed that 87.67% respondents gave emphasis on increasing security of computer, 50.68% respondents said to raising awareness about avoiding unknown links, 45.21% for being careful on friendship making, 36.99% emphasized on verification of news, 56.16% for being careful on computer using, 30.14% emphasized on improvement of accounts privacy.

Cyber crime victimization carries out unique reasons and impact upon youth people of the society. From the study it is observe that most of the respondents (83.05%) were teenagers, where majority of them were young male.

Experiences of cybercrime victimization in different cyber crimes have different victimizing reasons. Internet fraud is mostly affected by false or fake job or task opportunity (64.51%). Respondents get fake offer like online advertisement click job, task of like for social media pages, opening email accounts or fake offer of work as an employee of a renowned company. Online scammers play role with trap of monetary profit/reward (14.51%) over the Internet. They send scam mail for the trap or give phishing advertisement in the web pages. As a result people are losing their identity privacy or victimized by economic losses. In these cases, online fraudulent offenders are using public sentiment as a weapon. Victimization of hacking is enormously effected by untrusted login (42.86%) and clicking on unauthorized links of photos, videos and games (32.14%). Respondents are not aware about the untrusted access or too excited to explore new experience. In terms of Internet harassment misuse of personal photos and videos (33.33%) and chat in open chat room (29.17%) are main reason. Offenders misuse photos or videos of victim and upload those over the Internet. Identity theft is affected by giving information to unauthorized sites (58.33%) and person (41.67%). Young people easily give their personal information over Internet to download or see software, porn, game and photos. In the case of virus attack unauthorized software, games download (51.55%), fake advertisement clicking (19.59%) play vital role. Email bombing is being influenced by open view of personal information (45.45%) and giving email id to unauthorized people (22.72%) or sites (31.82%). Young people simply gave their personal email over Internet to get access in different web sites, but actually they find their way in a trap of world web which promotes victimization [21-24].

The effect of cyber crime victimization relies on primary, secondary and tertiary impact. All of the respondents are primarily victimized by cybercrime. Primary victimization contains monetary losses and psychological losses. Monetary losses includes costs of computer trouble shooting, theft of valuable information, fake job doing without pay and direct economic fraud victimization. Psychological losses include mental effect of private data losing, defamation and risk of re-victimization. On the other hand, 56.78% respondents believe that their family or institutions are the sufferer of his/her victimization where 38.14% respondents believed that community was victimized by the effect of cybercrime. Families of victims suffer from monetary losses or defamation or fear of victimization. Cases like identity theft bring losses of dignity and trust in the society. To understand the effect of cybercrime it is notable that, cybercrime increase significant magnitude of fear of crime than street crime. Security feelings about cyber space clarify the concept of victim about safety of web world. The study represent that, 72.03% respondents feel unsafe in cyberspace, where only 26.27% respondents feel safe in cyber space. Respondents who feel unsecure in cyberspace they feel fear of victimization for malfunction of computer for virus, hacking, fraud or harassment. Among them, victimization of virus attack (77.12%) and harassment (36.44%) create significant fear for young people. Increasing awareness about Internet use, Internet security and cyber crime can be helpful to decrease the fear of cyber crime [30,31].

Cyber crime is an intrinsically human affair where one individual tries to trick and exploit another. For that reason awareness can help to avoid those tricks. Generally, awareness programs are able to give basic knowledge about cyber space safety. For that reason 61.86% respondents believe that awareness in different areas decrease victimization. Awareness about computer security (87.67%), avoid unknown links (50.68%), careful computer operation (56.16%) are effective to decrease cybercrime. Computer security depends on use of antivirus or firewall. It is high time to take 1/n counselling to control this social, family, country to country cyber perils all over the world using the galore popular microsimulation modelling approach [32-34].

With the advancement of technology cyber crime is increasing day by day. In this, young people are victimized mostly for the sake of unawareness about cyber crime and its impact. They use Internet without proper security and verification which improves Internet harassment, hacking and also various criminal activities. In order to digitalize our country, there is no alternative to secure technological advancement among which tenable Internet using should prevail in priority. Along with raising awareness the law enforcement agencies and all stakeholders have to walk together to curve the modern perils like cyber crime.